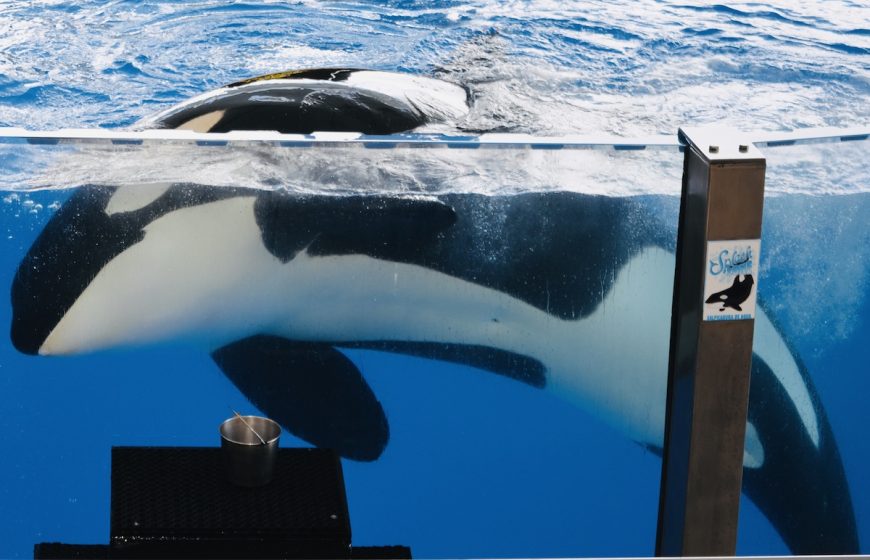 A story of loss and human betrayal

As soon I enter the stadium, I see her. She is logging on the water’s surface by the gate that leads from the show pool, also known as A-pool, into B-pool, one of the holding and training tanks at the back of the stadium. Her head, bobbing up and down, rests against the gate. And she just lays there, occasionally closing her eyes for a while. I recognize her immediately. It’s Morgan. She is the only orca at Loro Parque who was born in the wild and has a real family of orcas out there somewhere.

Morgan is believed to belong to a community of orcas in Norway. She somehow became separated from her pod and was found alone and malnourished off the coast of the Netherlands in June 2010. They took her to Harderwijk dolphinarium and held her there for over a year. In November 2011, after a Dutch court decided that returning Morgan to her family was not possible, Morgan was sent to Loro Parque’s orca stadium on the Spanish island of Tenerife. She has lived here since then and performs daily in front of mainly European holiday makers. In September 2018, Morgan gave birth to a daughter, named Ula, but the calf died just short of her third birthday in August 2021. 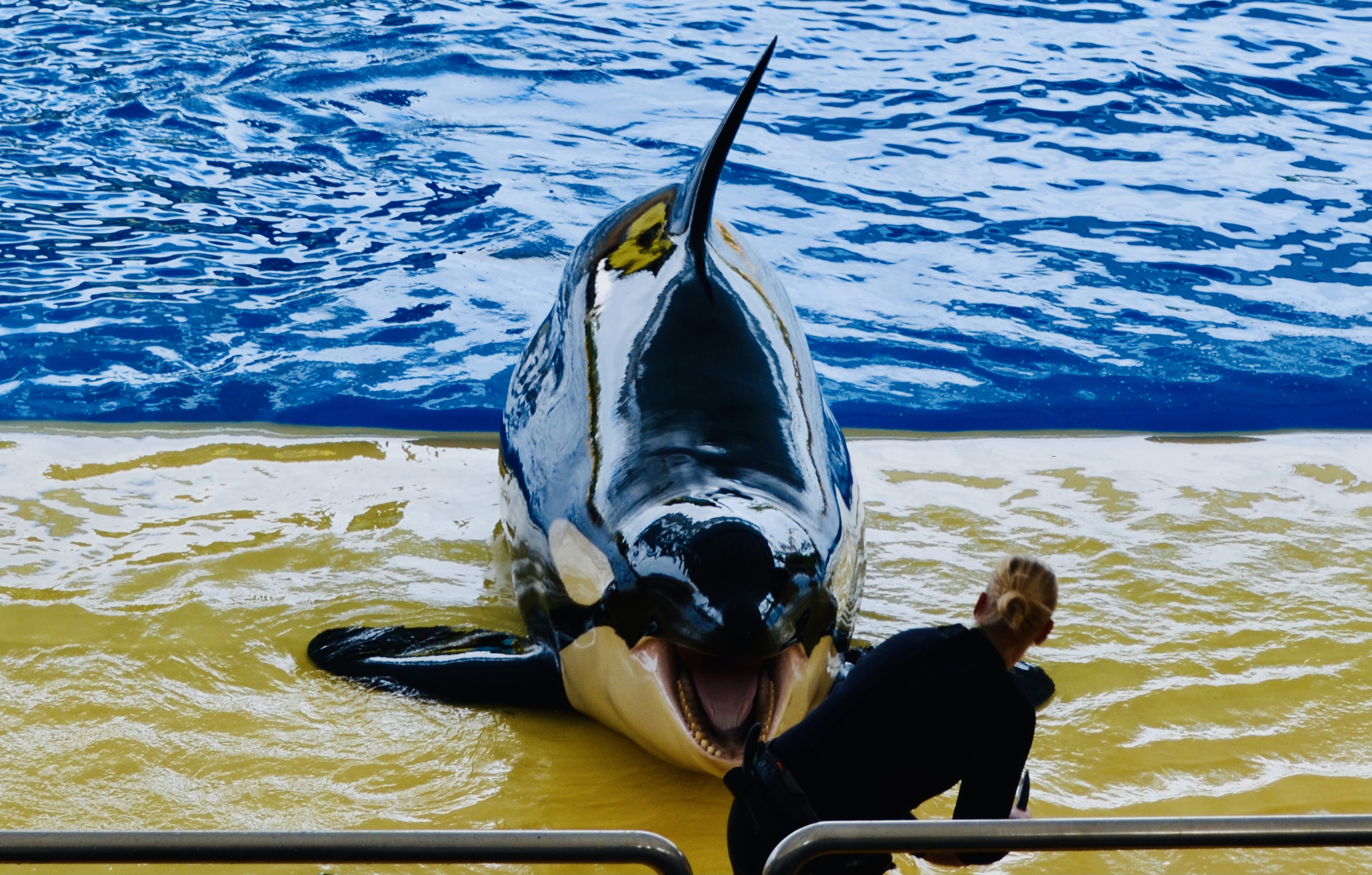 For more than ten years, Morgan has fulfilled her role as a tourist attraction at Loro Parque’s orca stadium in Tenerife, Spain. She frequently has to beach herself onto the concrete floor during shows, thereby giving crowds of spectators the opportunity to use her as a photo op. Credit: Helene O’Barry

When trainers carrying buckets of fish enter the stadium, Morgan lifts her head and opens her mouth. In fact, all five orcas do. They are clearly hungry and know that showtime is feeding time. They pay close attention to their trainers’ commands, jumping, swimming on their backs, presenting their tail flukes, and beaching themselves onto the concrete slide out. And they receive fish as rewards when they carry out a command correctly.

Loro Parque features Morgan as the star of the show, and she performs a segment all on her own while the other orcas are retained in the adjacent tanks. The stadium presents Morgan’s rescue story to spectators by displaying various drawings and text on the stage backdrop: “We want to share with you all the great story that brought her here,” the text reads. Loro Parque goes on to say that Morgan’s family, unfortunately, was never found, and she cannot be returned to the sea. Also, the announcer informs spectators that scientists discovered that Morgan is deaf, which would prevent her from hunting, navigating, and communicating underwater. They add, however, that Morgan has successfully integrated into her new family, and that she shares a positive connection with the other orcas at the park. Even though Morgan’s life story is heart-rending, Loro Parque presents it as a true fairytale. They make it sound as if Morgan won the lottery when she got separated from her family and ended up here, and there is not even a mention of her deceased daughter Ula with whom she shared a close bond. 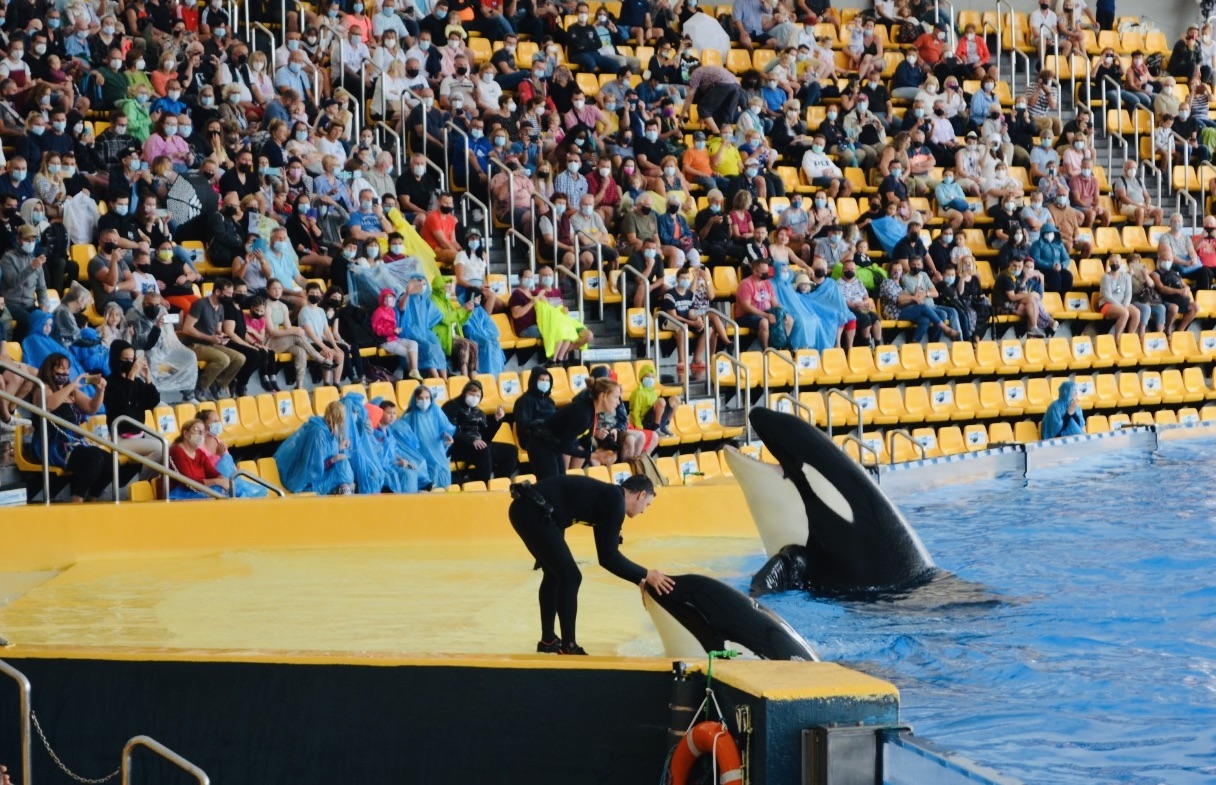 Two of Morgan’s tank mates (Keto in the back and Kohana in the front) perform their segment in front of applauding spectators. They were sent to Loro Parque from SeaWorld in the United States in February 2006 along with Tekoa and now deceased Skyla. The fifth orca currently living at Loro Parque is Kohana’s son Adán who was born at the stadium in October 2010. Credit: Helene O’Barry

During Morgan’s solo performance, which follows a carefully orchestrated script that is almost identical at every show, she compliantly spins around in the water and waves at the audience with her pectoral fins. As Morgan does this, Loro Parque plays a particularly beautiful song by Phil Collins, “You’ll Be in My Heart.” Part of it goes like this: “For one so small/ You seem so strong/ My arms will hold you/ Keep you safe and warm/ This bond between us/ Can’t be broken/ I will be here/ Don’t you cry.” I see the song choice as an attempt at concealing Morgan’s predicament and making her life in captivity appear beautiful and filled with love, emotional warmth, and protection. It creates the illusion that Morgan’s relationship with her trainer is based on mutual understanding and respect, and that they are equals who have both entered this relationship willingly and freely. The harmful aspects of confinement in such an unnatural and barren environment are entirely hidden from spectators, and they applaud enthusiastically as Morgan gives her trainer a kiss.

At the end of Morgan’s segment, she beaches herself onto the slide out, lifts her tail fluke, and shakes her head back and forth quickly, something an orca would never do in nature. The headshake results in audience laughter, and people get out their smart phones and shoot photos of Morgan as she lies there, fully exposed on the concrete floor. This is her life now. 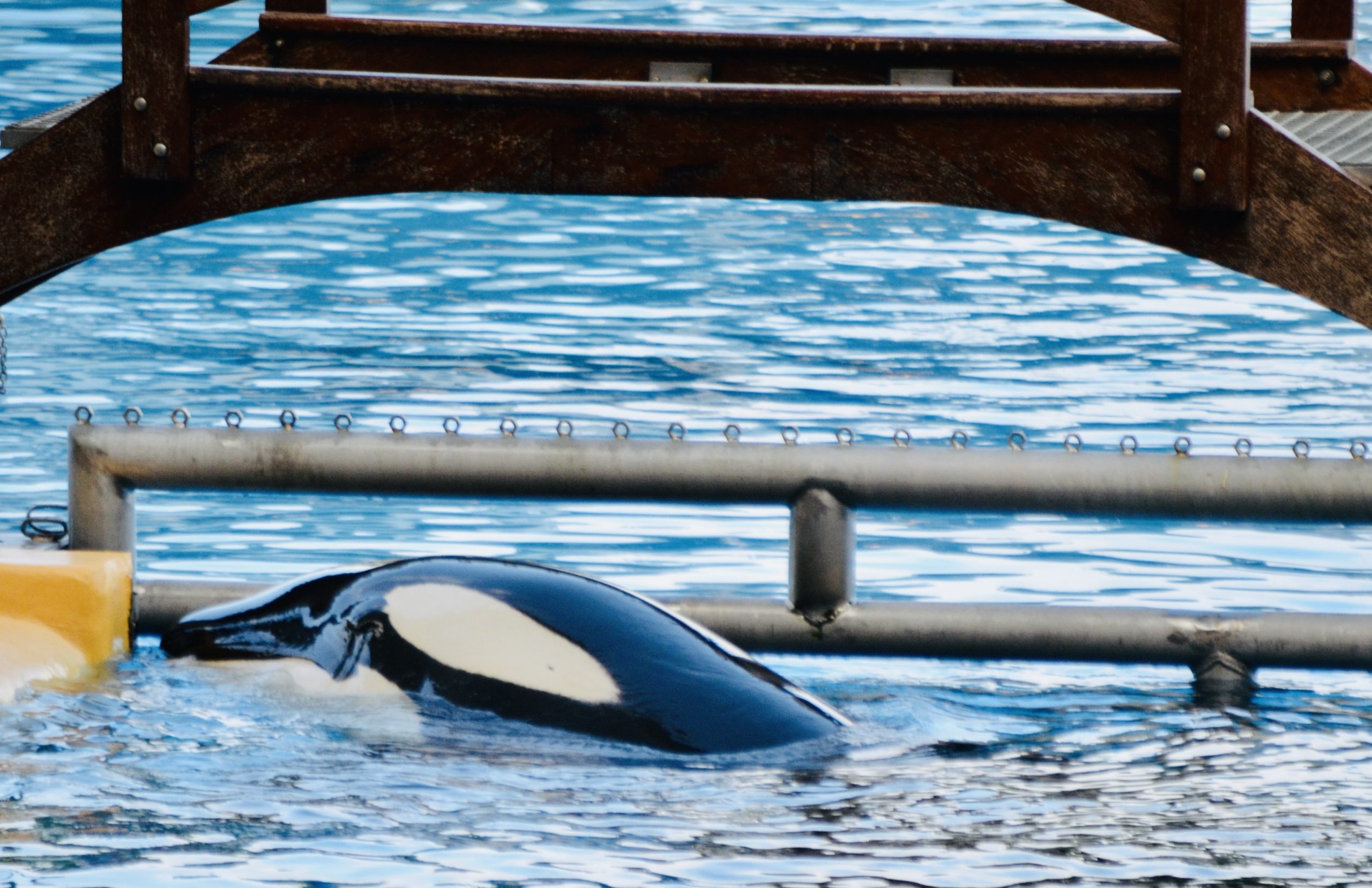 Caption: Morgan, who lost a daughter last year, spent a long time like this, logging on the surface of the water by the metal gate that leads from the show pool into one of the holding tanks in the back at Loro Parque’s dreary orca stadium. Credit: Helene O’Barry

Morgan needed help when she was found in the Watten Sea more than 10 years ago, but seeing her like this, obedient and fully trained, raises serious questions. How much effort did those in charge of her fate put into finding her family and exploring other options, such as a large sea pen in Norway, something more natural than the minuscule and theatrical madhouse she is trapped in now? How can anyone justify subjecting her, or any orca, to lifelong incarceration in such a small, dreary space where she can’t even swim normally? When Morgan became separated from her pod all those years ago, she lost everything that her existence revolved around: her mother, her family, and her freedom in her vast ocean world. For more than a decade, this once-wild orca has fulfilled her role as a tourist attraction under the hot tropical sun in a loud show stadium 200 miles off the west coast of Africa. Her behaviors have been shaped by training sessions, not enough space, and no real choices in life. I will never forget the sight of her leaning up against the metal gate, surrounded by the starkness of concrete walls that contain her in a grotesquely tight space. And when the show is over, I leave the stadium with a sense that Morgan’s existence at Loro Parque is marked not by unconditional love and mutual respect, but by inconceivable loss and human betrayal.

Learn more: Travel and Captivity: A Guide to Responsible Travel

Featured image: At Loro Parque, Morgan spends her days performing for crowds of mainly European tourists. Her attention remains fixated on the bucket of fish throughout most of the show, and trainers have successfully programmed her to perform abnormal behaviours in exchange for food rewards. Credit: Helene O’Barry