Peaceful public demonstration can be an important and effective tool to raise awareness. View our GUIDEBOOK FOR DOLPHIN DEFENDERS for more information, and check with local organizations to inquire about planned protests. Feel free to view and use our DOWNLOADABLE RESOURCES. 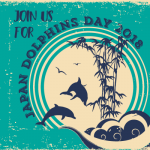 September 1 marks the first day of the Taiji hunting season. Join us in one of many locations around the globe to bring attention to the cruelty of these hunts. These peaceful demonstrations are organized to unite our voices against the annual drive hunts that are fueled by the captivity industry.

JOIN US FOR JAPAN DOLPHINS DAY 2018 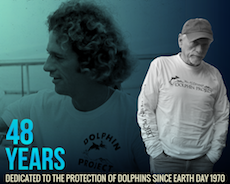 Ever since the first Earth Day in 1970, the day that launched Dolphin Project’s mission to end captivity and exploitation of dolphins, April 22 remains special to our organization.

An international day of activism and awareness, now in its fifth year. After visiting Taiji, Japan and witnessing the atrocities committed there, Rachel Carbary began Empty the Tanks – a yearly public awareness and protest event that gives a voice to all captive dolphins and other whales. Activists from over 20 countries congregated at marine parks in over 62 locations to speak out against marine mammal captivity.

Demonstration Guidelines:
1. Demonstrations and protests must be legal and peaceful. You represent your cause, so be courteous. People aren’t interested in listening to aggressive or abusive protesters.
2. If you need a permit in order to protest, get one. You can call City Hall or the police department and ask if you need one. Always get names of people you talk to on the phone. With the permit, you will be told where you are allowed to demonstrate. Explain this to everyone in the demonstration. You will probably not be allowed to interfere with people attending the event or trying to buy a ticket.
3. If you have a lawyer, let him/her know what you’re doing.
4. One person should speak for the group. This avoids the appearance of conflict, which can destroy the effectiveness of the demonstration.
5. Hand out informational materials that briefly explain your position and give the group’s address and phone number. If someone tosses it on the ground, pick it up and give it to someone else. Check the area before you leave to pick up any remnants or trash. Be pleasant at all times.
DONATE