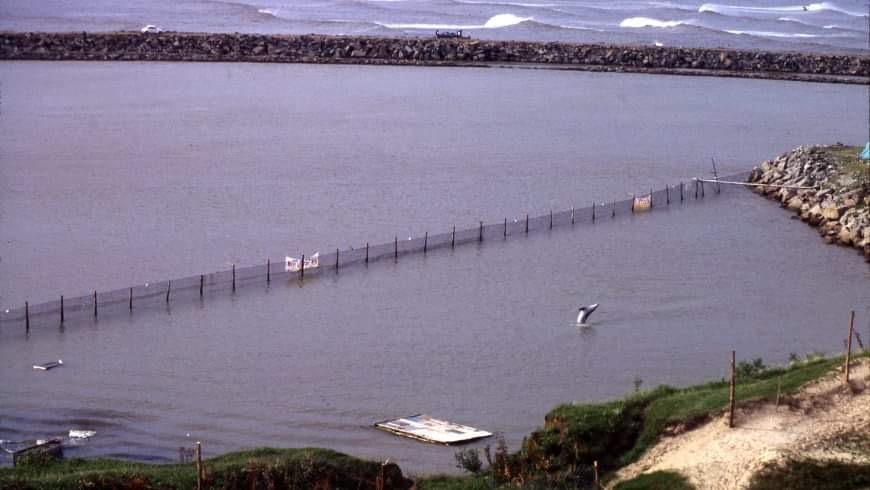 Flipper was rescued from an abandoned amusement park in Santos, Brazil. He was living in isolation in a filthy tank for at least ten years. The tank was heavily polluted, as the filtration system had broken down years earlier.

Our rescue team immediately drained the tank, scrubbed it clean, and refilled it. Our research led us to Tito, the fisherman who actually captured Flipper and sold him to the amusement park in Santos. He took me to the exact spot where the capture to place 10 to 15 years earlier in Laguna, Brazil, some 300 miles from Santos. And at this very spot we built a seapen.

Tito told me he took Flipper away from his mother, who was named Riscadaro. She was one of several dolphins in Laguna who have a symbiotic relationship with the local dolphins. The fisherman stand in waist deep water with cast nets in hand waiting for the so-called “good dolphins” to herd the fish into their nets. When the fisherman throw their nets out to catch the fish, many of the fish bounce back to the dolphins. This is why the locals call then the good dolphins. Riscadaro was one of these dolphins.

When we build the seapen for Flipper, Riscadaro visited every day. After a three-month rehabilitation process, we removed a section of the fence that separated Flipper from Riscadaro. They stayed together for several days, then Flipper moved on. He traveled along the Brazilian coastline for about 300 miles. Flipper was seen and photographed on two occasions: the first time was one year and a day later by a tourist. The second sighting was 22 months later by another tourist. Flipper’s freeze brand was still visible on the video tape after all this time.