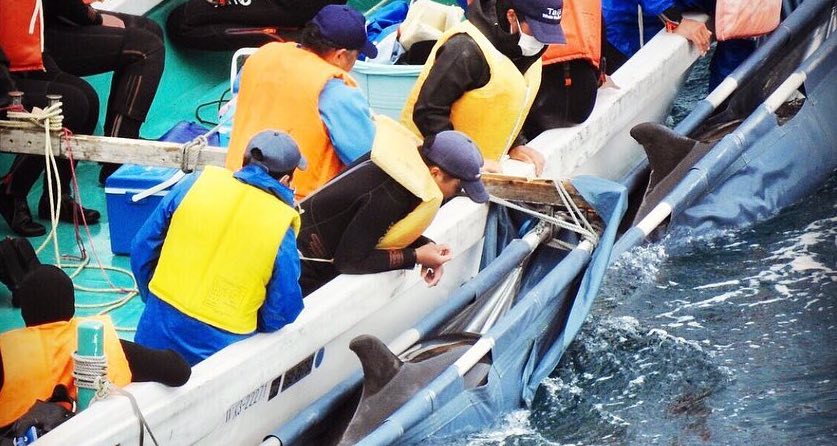 Each year Dolphin Project returns to Taiji to monitor the dolphin captures and slaughters, sharing real-time footage with the world so that others may be moved to action. The key to ending the cruelty is ending the demand from the captivity industry. Dolphin trainers work alongside dolphin hunters, selecting which mammals will be sold for captivity and which will be selected for slaughter. The money trail points to the lucrative, worldwide dolphin captivity industry, therefore, the key to ending this barbaric and irresponsible cruelty is ending the demand for captive dolphins.

Here is a look at the history of the hunts, Dolphin Project’s work in Taiji and the progress that has been made over the years:

Although the quiet town of Taiji, Japan, has a history of whaling dating back to the Edo period (1603-1868), the opening of the Taiji Whale Museum in 1969 with live dolphins captured from local waters sparks a lucrative captivity industry. With this newly-formed demand, dolphins trainers begin a long relationship of working hand-in-hand with dolphin hunters to capture dolphins for the captive trade.

Within the United States, the MMPA prohibits the import of animals captured inhumanely, effectively prohibiting the import of dolphins caught in drive hunts. However, SeaWorld and other parks hold import permits for Taiji dolphins into the 1980’s, listing the capture method as the “purse seine method.” After it is publicly revealed that the captures are actually conducted through drive fisheries in violation of permit conditions, SeaWorld stops importing Taiji-caught dolphins.

Under the tutelage of Founder/Director Ric O’Barry, Dolphin Project is the only organization which has been consistently on the ground in Taiji since 2003. We document and monitor the captures and slaughters that take place in Taiji, test the contaminant levels of dolphin meat and work with Japanese activists to increase local support. Dolphin Project’s team of Cove Monitors report on daily hunting activity, observe and document captive transfers, as well as monitor recent captures at the Taiji Whale Museum and other training sites. We operate strictly within Japanese law and further work to educate the people of Japan about the hunts. 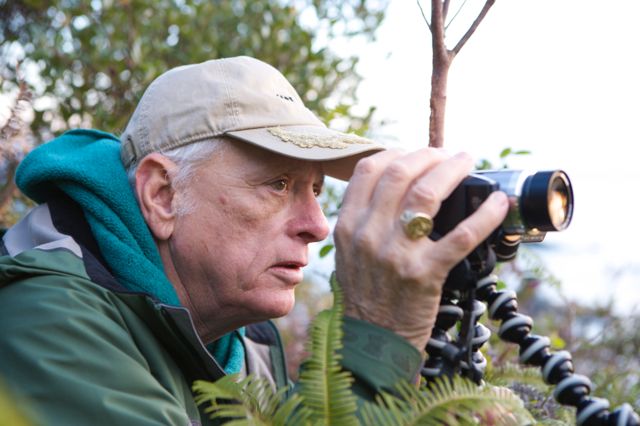 Five years in the making, The Cove movie exposes the brutal dolphin hunts to the world by following Ric O’Barry’s efforts to document and stop the hunts. The film quickly becomes an audience and critical favorite, winning dozens of awards, including the Academy Award for Best Documentary Feature (2010). With its closing message, The Cove ignites a global movement to end cruelty towards dolphins. 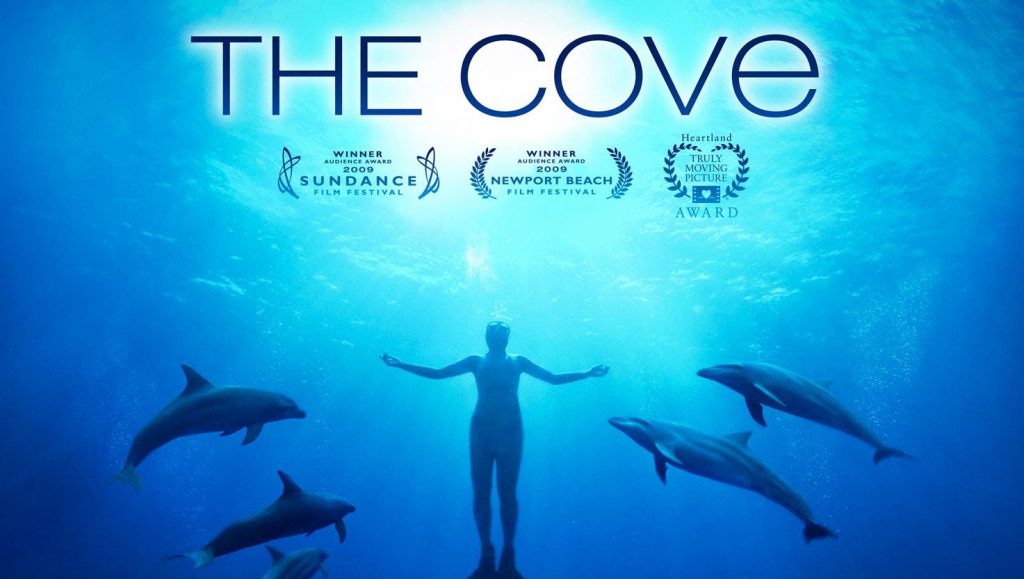 On September 1, 2010, over 100 activists from 13 countries joined Ric O’Barry in Tokyo to deliver a petition bearing over 1 million signatures to the U.S. Embassy of Japan, calling for an end to the drive hunts. The volunteer activists joined Dolphin Project in Taiji to commemorate the beginning of the hunting season, bringing international attention to the situation. 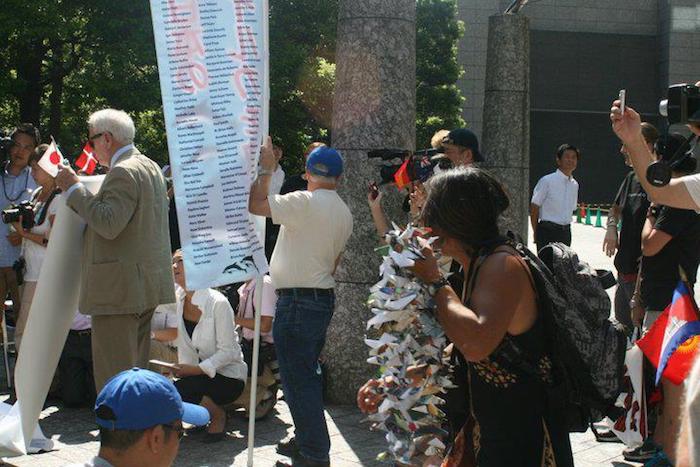 Ric O’Barry in front of the US Embassy in Tokyo in 2010. Courtesy Origami Whales Project

Dolphin Project revolutionizes live streaming by broadcasting the drive hunts online and on social media in real time, exposing the cruelty of the drive hunts to wider audiences while encouraging viewers to take action and put an end to the demand for captive entertainment. By keeping international attention on this issue, Dolphin Project endeavors to educate and motivate the public to action in order to bring an end to this cruelty. 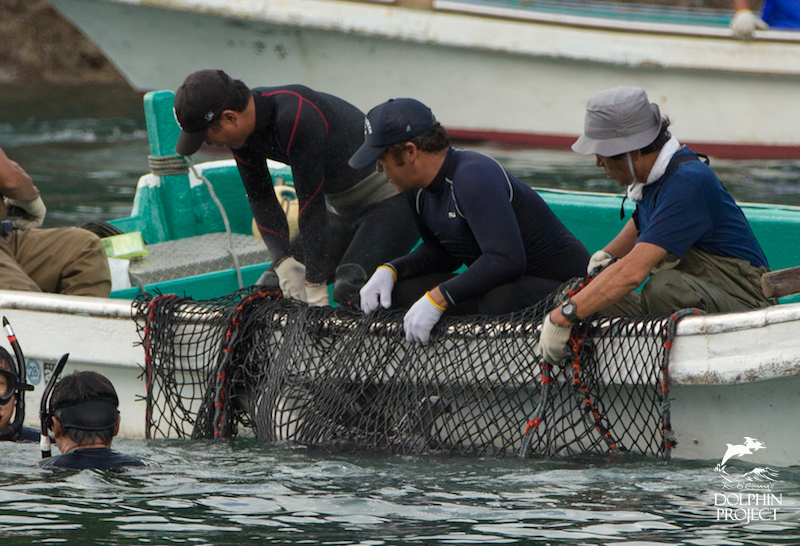 According to Japanese officials, dolphins are slaughtered for their meat, which is considered a food source – yet only a small minority of people in Japan actually eat the meat. During our many campaigns in Japan, we receive the impression that dolphin meat is considered “trashy,” unlike the much more expensive whale meat. DNA tests reveal some of the dolphin meat sold in Japanese markets is mislabeled as whale meat. From an all-time high of about 1400 slaughters in the 2007/2008 season, the slaughter volume fluctuates downwards, with the 2012/2013 season yielding around 900 slaughters. These numbers continue to decline. 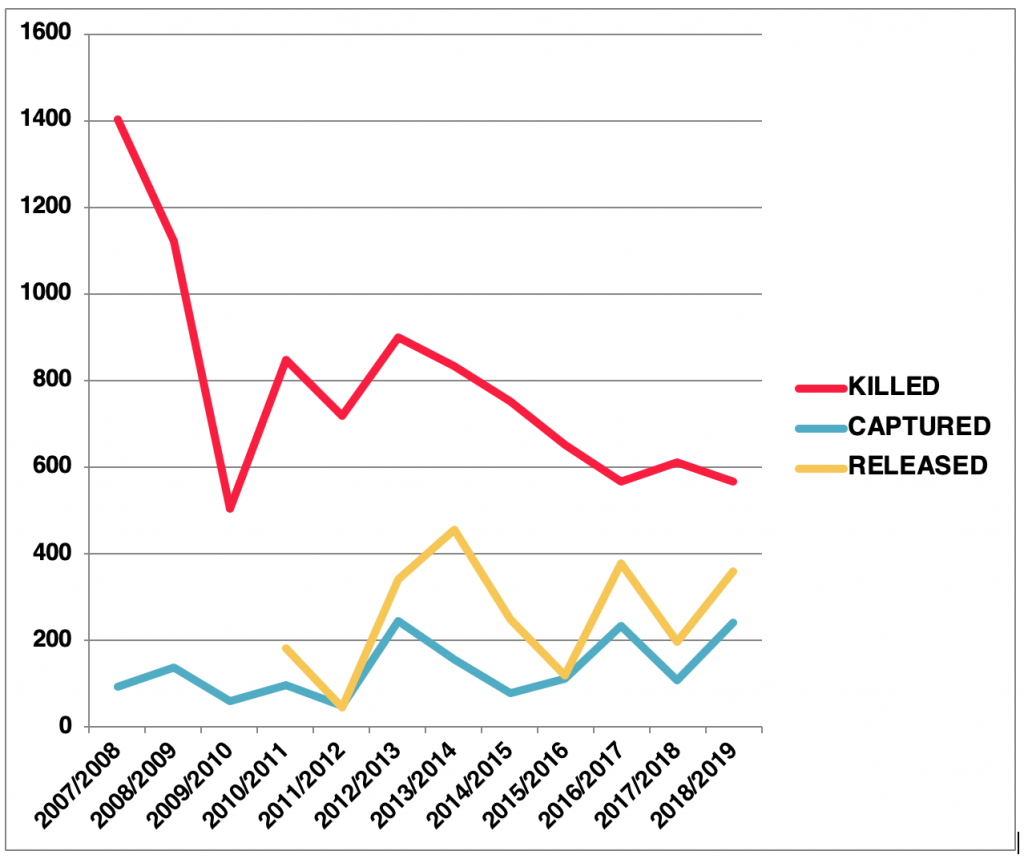 After years of international pressure, the World Association of Zoos and Aquariums (WAZA) suspends the Japanese Association of Zoos and Aquariums (JAZA) as a member of its organization in relation to Taiji’s drive hunts. Only after JAZA bans its members (zoos and aquariums within Japan) from acquiring Taiji-caught dolphins a few months later, they are allowed to rejoin WAZA – a huge win for dolphins! The Taiji Whale Museum and five other Japanese aquariums later give up their JAZA membership to continue acquiring wild-caught dolphins. 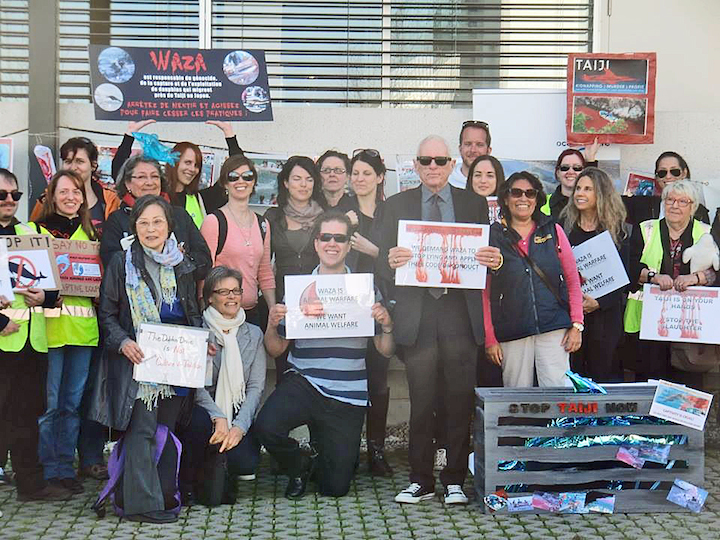 Worldwide media reports on this horrifying incident, when a dying Risso’s dolphin, after being driven into the Cove, breaks free of the nets and swims up to Ric’s feet. While Ric and the Dolphin Project team are unable to intervene, the incident clearly shows the terror the mammals endure from the moment they are hunted in open water to their death and/or selection for captivity inside the killing Cove.

Terrified Dolphin Throws Himself At Ric O’Barry’s Feet To Escape Hunters in Taiji, Japan – DolphinProject.com from Dolphin Project on Vimeo.

November 2015: The Documentary Behind the Cove is Released

Behind the Cove is intended as a rebuttal to The Cove. Although the film explores the historical significance of Japan’s whaling, it does not discuss the largest aspect of the dolphin hunts – the captivity industry. Modern dolphin hunting is not about tradition, it is about profit and the dolphinarium trade.

Ric O’Barry is deported from Japan on February 5, 2016 after being incarcerated for 19 days upon arrival. While we continue the legal battle to allow Ric’s re-entry into Japan, the rest of our Cove Monitor team returns to Taiji each season to document the dolphin slaughters and captures. 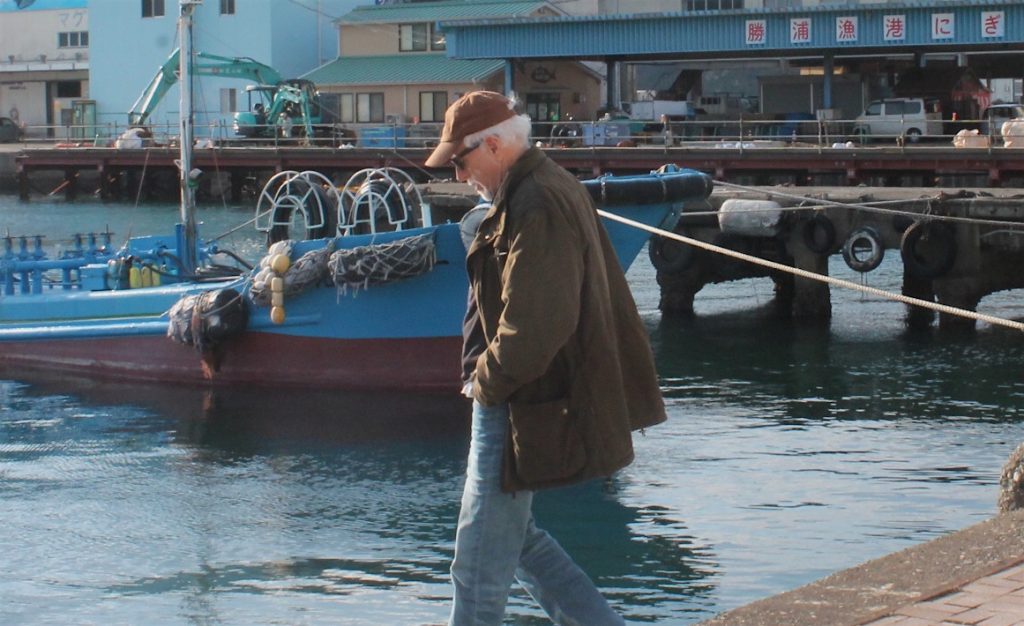 In April of 2018, dolphins captured in Taiji’s drive hunts become no longer welcome in another country! South Korea’s Ministry of Environment announces a revised bill on the Protection and Management of Wildlife, banning all imports of dolphins captured in such a brutal manner. Dolphin Project has supported our South Korean friends and colleagues for many years in their efforts to ban dolphin imports from Taiji. We are grateful to Hot Pink Dolphins, Korean Animal Welfare Association and Korean Federation for Environmental Movement of Ulsan on their efforts. 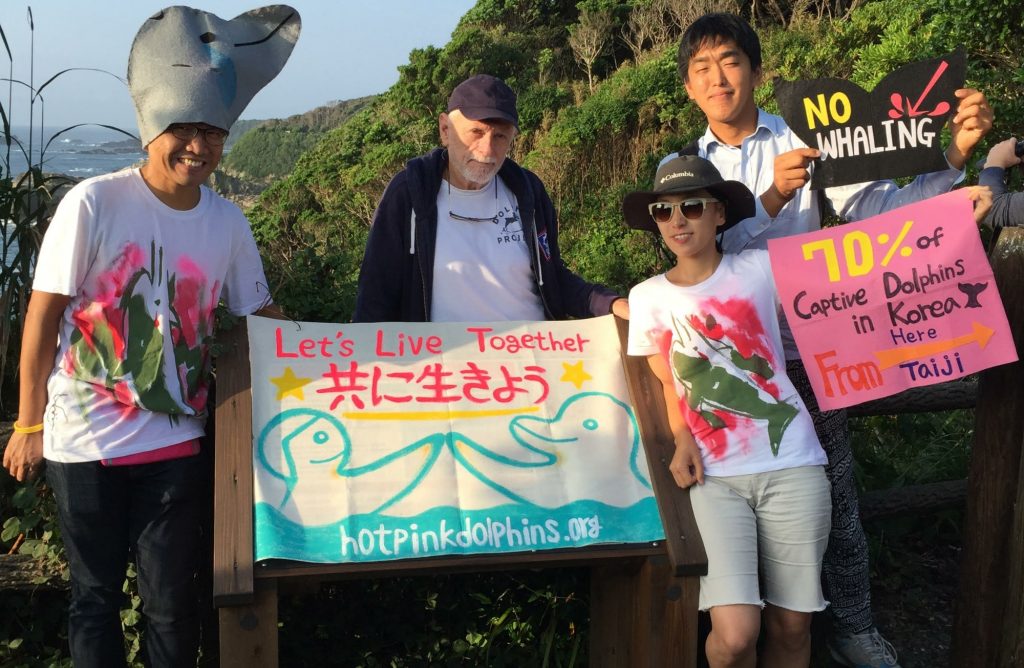 Ren Yabuki and Life Investigation Agency (LIA) file a lawsuit against Taiji with hopes of bringing an end to the hunts and to the suffering of dolphins. LIA is responsible for several legal actions in Japan, successfully defending the rights of animals. 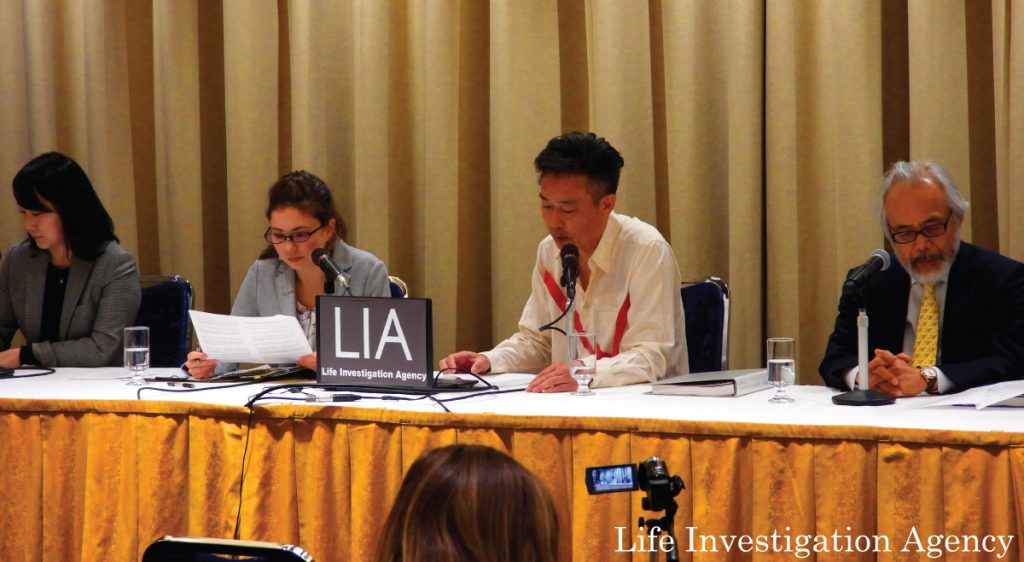 Almost four years and ten months after Ric O’Barry was deported from Japan, the decision of the Tokyo High Court to revoke the deportation order by the Ministry of Justice is now effective. In a judgement for the case of O’Barry versus Japan, the court ruled in Ric’s favor, citing that both his denial of entry (dated January 20, 2016) and deportation (dated February 5, 2016) were without legal merit. The Japanese government attempted to appeal this decision, however, the Supreme Court did not accept the appeal. Thus, case closed! Dolphin Project would like to thank each and every person who has fought on Ric’s behalf. Your tweets, emails, calls and donations made a difference! We would also like to thank Matt Sorum, Leilani Munter, Maisie Williams, Slash, Dr. Brian May and Tom & Kim Scholz. Thank you to Congressman Ted Lieu, the U.S. State Department, the U.S. Embassy in Tokyo and The Law Offices of Takashi Takano. 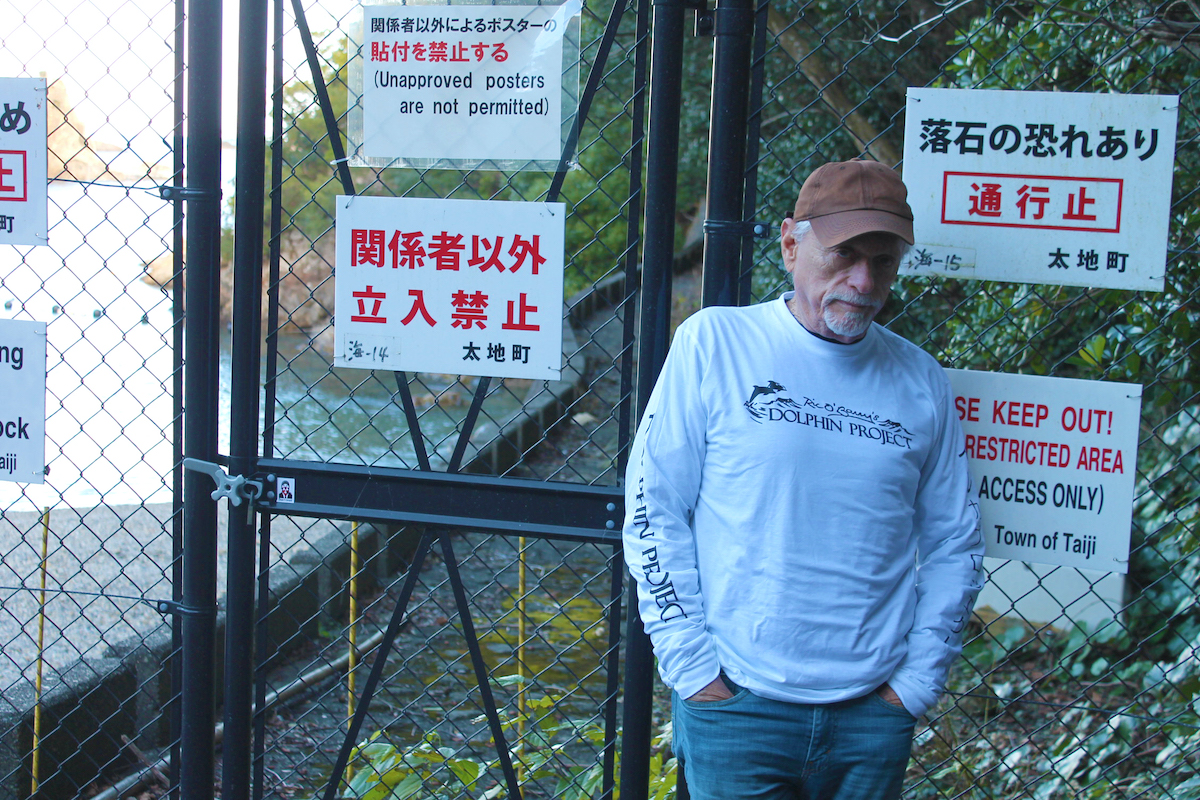