Bottlenose dolphins are highly desired by captive facilities around the world, making them a very target for live capture in Taiji’s drive hunts. In the past several seasons, bottlenose dolphins have only been subject to captive selection, and have not been slaughtered.

In the wild, bottlenose dolphins inhabit a large part of the world’s oceans from tropical to temperate waters, and near-shore to offshore areas. Within the species, there are several different subgroups, such as coastal populations with dolphins smaller in body size, to deep diving offshore populations with more robust dolphins. Each of these populations or subgroups have a unique geographical range. They feed on a large variety of fish and invertebrates, with some populations utilizing complicated, cooperative hunting strategies (i.e. “fish whacking” and “mud ring feeding”) to forage. 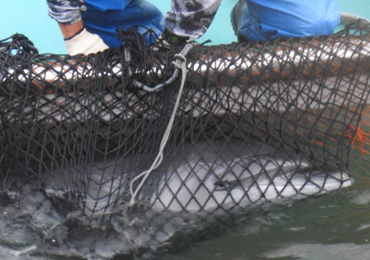 Striped dolphins are not commonly held in captivity, although they are captured for live display in Taiji. This species all too often falls victim to slaughter in the cove, sometimes going into mass panic during the process.

Striped dolphins are a smaller species, and can be quite acrobatic at the surface with leaps as high as 20 feet into the air. They are widely distributed within their range, although the conservation status of individual populations is not known. Striped dolphins tend to prefer deep tropical, and warm waters near areas of upwelling, where they forage and feed on a variety of fish and cephalopods. They are capable of diving to at least 3,200 feet.

In Taiji, they look quite similar to pantropical spotted dolphins, being similar in size and basic shape. Striped dolphins can be distinguished by a slightly more robust body shape, and by their striking stripe pattern on their sides. When being chased by hunting boats, they tend to porpoise (leap with forward propulsion out of the water) at high speeds. Striped dolphins are not commonly held in captivity, although a handful of facilities claim to be “pioneering” husbandry methods of keeping them alive in concrete tanks for longer periods of time. Although sometimes captured, striped dolphins all too often fall victim to slaughter in the cove, sometimes going into mass panic during the process. 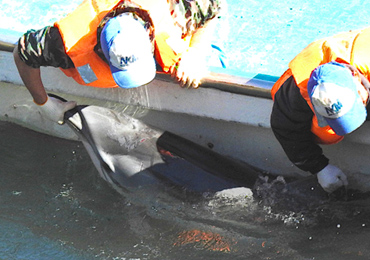 In recent years, captive display of Risso’s dolphins has become more common in some parts of the world. They are targeted for both capture and slaughter in drive hunts.

Named after naturalist Antoine Risso, Risso’s dolphins specialize in feeding on squid, and have physical features that reflect their dietary preference. Similar to sperm whales who are also squid specialists, Risso’s dolphins only have teeth in their lower jaw. Adult Risso’s dolphins also bear a number of white scars, due to their unique skin. These scars are from hunting squid, and from social interactions with other Risso’s dolphins. Risso’s dolphins are born light grey in color, became dark grey as juveniles and then gradually become more and more white as they grow older and gain scars.

Risso’s dolphins are typically found in small pods of 3-12 individuals, but occasionally gather to form larger groups. Recent research has found that some Risso’s dolphins’ pods are often comprised of individuals of similar age, and of the same sex, and that individuals in these groups form long-term bonds. In Taiji, our team has also observed what appear to be nursery pods, or pods that are mostly made up of adult females and their calves. Like bottlenose, Risso’s dolphins have also been found to have spindle neurons, suggesting sophisticated social and cognitive abilities. Risso’s dolphins typically prefer deep, offshore waters and are capable of going on long, deep dives. They have often been documented diving for long periods of time during Taiji’s drive hunts, as the hunting fleet attempts to drive them to the cove. In recent years, Risso’s dolphins have become more common in captive facilities in some parts of the world. In drive hunts, Risso’s dolphins are subjected to both captive selection and slaughter. 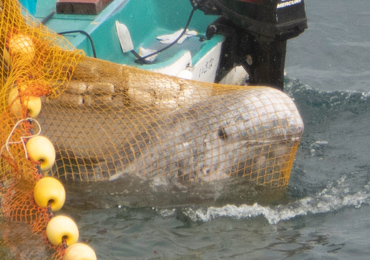 As a recent addition to the drive hunt quota, melon-headed whales are sometimes subject to capture in Taiji’s drive hunts. This species all too often falls victim to slaughter in the cove.

Despite their name, melon-headed whales are part of the oceanic dolphin family. They are mostly black or dark grey in body color. They are very similar in appearance to another dolphin species- pygmy killer whales- and are often mistaken for them at sea. Pygmy killer whales were once mistakenly driven to the cove by the dolphin hunting fleet in Taiji, and were soon after released upon correct identification. The easiest way to tell the two species apart is the head shape; melon-headed whales have a more triangular, sloped head that becomes pointed near their mouth, whereas pygmy killer whales’ heads are more rounded and bulbous. 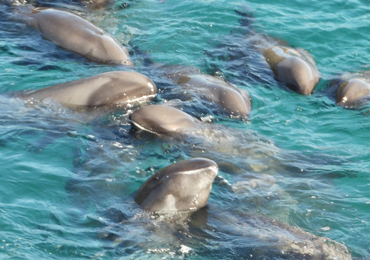 In the past few seasons, pantropical spotted dolphins have only been subjected to captive selection in Taiji’s drive hunts, and not slaughter. The demand for the captive display in some countries seems to have increased in recent years.

In the past few seasons, pantropical spotted dolphins have only been subjected to captive selection in Taiji’s drive hunts. They are becoming increasingly common in captive facilities in some parts of the world. Our cove monitor team has observed several deceased pantropical spotted dolphins being removed from Taiji’s sea pens, indicating that some of them perish after the traumatic capture process. 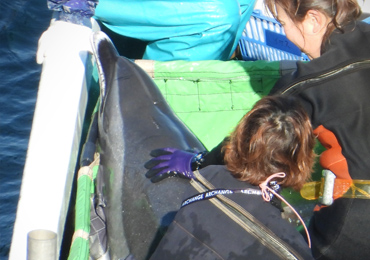 Along with melon-headed whales, rough-toothed dolphins were only recently added to Taiji’s drive hunt quota. The permitted number for this species has been quite low, and they have only been targeted for live-capture for the aquarium trade.

At a distance, rough-toothed dolphins have a similar appearance to bottlenose dolphins, but upon a closer look there are some unique differences. Unlike most beaked dolphin species, rough-toothed dolphins have no demarcation between their melon (forehead) and beak. Their melon slopes into their beak, giving them an almost “prehistoric” look. Rough-toothed dolphins also have a lighter underside, which extends to their throat, lower jaw and sometimes the edges of their upper jaw. Some interesting behaviors have been observed in this species in the wild, such as caring for sick individuals, supporting dead individuals for hours, or even several days. Our Cove Monitor team has observed them swimming in tight together, shoulder to shoulder around the hunters’ divers during high tension moments of the capture process. There is a lot that is yet to be discovered about rough-toothed dolphins.

Along with melon-headed whales, rough-toothed dolphins were added to Taiji’s drive hunt quota in 2017. The quota for this species has been quite low for each season they’ve been listed, and they have only been the target of live-capture for the aquarium trade. 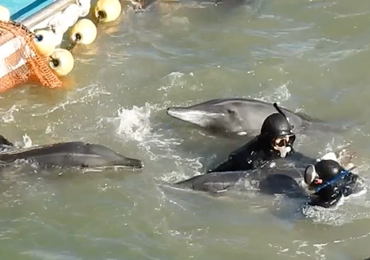 Unlike other species, Pacific white-sided dolphins are typically hunted utilizing an offshore netting method, where a pod is enclosed in nets just outside of the Taiji harbor. This species is typically only targeted for live-capture.

Pacific white-sided dolphins were named for their distinct coloring. With a name that’s a mouthful, they are sometimes alternatively called “lags,” short for their scientific name. The easiest way to identify them at sea is by their dual-toned dorsal fin, which is dark grey on the front half and light grey on the back half. Some populations of Pacific white-sided dolphins are thought to be migratory, residing in cooler waters during summer months and temperate waters in the winter months.

Pacific white-sided dolphins are in high demand for captivity facilities, making them a capture target in Taiji’s drive hunts. They are not typically found in local waters until towards the end of the hunting season in February. Unlike other species that are driven into the cove, Pacific white-sided dolphins are typically hunted utilizing an offshore netting method, where a pod is enclosed in nets just outside of the Taiji harbor. This is thought to be done to avoid injuries they could sustain from panic and attempts to escape the rocky shallows of the cove. The stress in offshore netting is still immense, as evidenced by injuries on the dolphins, and blood on some of the gear used for capture documented by our Cove Monitor team. In February of 2020, one Pacific white-sided dolphin died during a capture process and was discreetly tied to the corner of a sea pen, while the rest of the pod was captured and several members were placed in the pen alongside it. 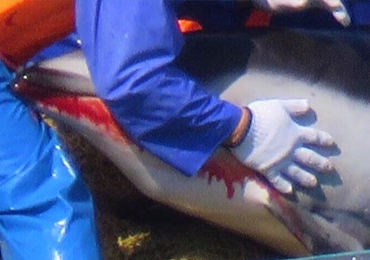 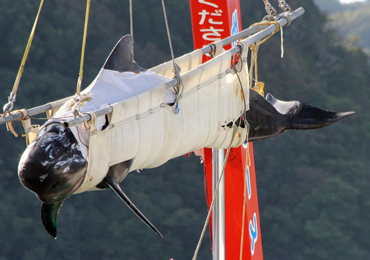 False killer whales have not been successfully hunted in Taiji since 2015, but they remain on the drive hunt quota. There are concerns for the health of local populations, although the exact cause of their absence from drive hunts in recent years is not known. 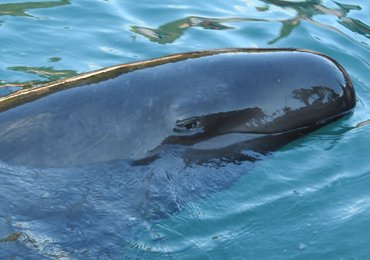 Handbook of Whales, Dolphins and Porpoises of the World, by Mark Carwardine

Guide to Marine Mammals of the World, National Audobon Society

Wiley Library: Total number and volume of Von Economo neurons in the cerebral cortex of cetaceans

Social structure of Risso’s dolphins (Grampus griseus) at the Azores: a stratified community based on highly associated social units