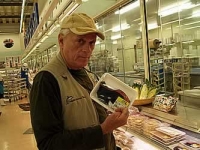 Dolphins and small whale are at the top of the food chain in the ocean, concentrating pollutants in their meat. As such, they are heavily contaminated by mercury. And while the Japanese government is fully aware of the dangers of mercury contamination, they ignore the problem and allow dolphin and whale meat to be sold in markets. Japanese consumers are exposed to danger but not clearly warned.

Mercury is the second most toxic poison in the world, second only to plutonium. Mercury attacks the brain and the nervous system, causing damage to eyesight, hearing and motor-skills, as well as interfering with memory and thought processes which could potentially lead to dementia. It further attacks fetuses in pregnant women, causing life-long brain damage. In other words – mercury can kill.

In Minamata, Japan, poisonous mercury dumped from a factory into Minamata Bay caused severe poisoning of tens of thousands of people in the 1950’s and 60’s and resulted in a whole generation of seriously compromised children. Japanese scientists personally told Ric O’Barry, Founder/Director of Dolphin Project, that the levels of mercury in dolphin meat are higher than the levels they have seen in the fish of Minamata Bay that caused the so-called “Minamata disease” – poisoning caused by too much mercury in the human body.

• Mercury levels can be 20 to 5,000 times higher in dolphin and small whale meat than levels recommended by the UN World Health Organization and the Japanese Ministry of Health.

• Other dangerous pollutants like PCBs and cadmium can be found in dolphin and small whale meat bought for food in Japanese markets.

In tests conducted on behalf of our colleagues at the Elsa Nature Conservancy of Japan and The Japan Times in 2006-07, levels of mercury in dolphin meat was 4 to 13.5 times higher than the maximum level set by the Japanese Health Ministry. Mercury in pilot whale and Risso’s dolphin meat were even higher, ranging from 9.6 to 30 times higher than health maximums. The samples of dolphin and small whale meat were purchased randomly in markets in Japan.

“The increase in the concentration of a chemical over time means they are stored faster than they are broken down (metabolized). They are particularly damaging to some organs such as the brain, liver, kidneys and bones, and are also often an aggravating factor or determinant, in many chronic diseases.” Luca Giovagnoli, DVM

Studies of people in Japan who eat dolphin meat on a regular basis, such as in the town of Taiji, Wakayama Prefecture, show dangerously high levels of mercury when tested. According to an article in The Japan Times by Boyd Harnell: “Specifically, the tests of 1,137 Taiji residents last year revealed that average MeHg (mercury) levels were 11.00 parts per million (ppm) for men and 6.63 ppm for women — compared with an average of 2.47 ppm for men and 1.64 ppm for women at 14 other locations in Japan.”

In 2015, an article written by Rob Gilhooly in The Japan Times appeared to confirm that dolphins caught in the cove are dangerous if consumed. A rare admission from fisheries cooperative official Yoshifumi Kai, acknowledged that tests on locals have yielded high mercury levels. Gilhooly writes:

Official reports say in some cases [tests] exceeded 100 parts per million — a far cry from the government’s safe level of 0.4 ppm and 100 times that set by the U.S. Environmental Protection Agency.

In February of 2015, Dolphin Project purchased several packages of striped dolphin meat to test for mercury, PCB (polychlorinated biphenyls) and radiation levels (radioactive cesium-137). The dolphins were captured in a Taiji drive hunt and slaughtered in the Cove. Tests revealed the presence of all three contaminants in the dolphin meat with mercury testing higher than the Japanese government’s recommended level of 0.4 parts per million.

Packaged dolphin meat is tested for mercury and other contaminants.
Credit: DolphinProject.com

Dolphin Project has been buying and testing dolphin meat for years, and never once have we found a package that was not contaminated with high levels of mercury and other toxins. Like any other product, this meat is based on supply and demand. Ultimately, our work is about reaching Japanese consumers. If the Japanese people learn the truth about these contaminated products, our hope is that they will stop buying them.