In July 2019, Dolphin Project and the Jakarta Animal Aid Network (JAAN) were notified that the government of Indonesia’s Forestry Ministry intended to confiscate a variety of wild animals, including four dolphins, held at the Melka Excelsior Hotel, on the island of Bali.

We moved quickly to assess the four dolphins, discovering that two were in stable condition and able to leave the resort. In August 2019, the first two dolphins, Rocky and Rambo, were successfully moved into a temporary sea pen. The other two dolphins, Johnny and Dewa, were held at the hotel facilities to treat ongoing health issues.

In September 2019, Dolphin Project, in conjunction with our local partners, the Central Jakarta Forestry Department and the Jakarta Animal Aid Network (JAAN) built the world’s first permanent dolphin sanctuary/retirement center in in Banyuwedang Bay, West Bali. One month later in October 2019, Johnny and Dewa were moved to the sanctuary, with Rocky and Rambo following in December 2019. The first two did not appear to be candidates for release, however, were able to live at the sanctuary in peace and dignity. The latter two continue to undergo evaluation and if they are deemed candidates for release into their home range, will be sent to Camp Lumba Lumba, Dolphin Project’s Readaptation Center in Kemujan, Karimun Jawa. In March 2020, Dewa succumbed to his chronic illness and despite round-the-clock expert veterinary care, passed away on March 11.

Ric O’Barry traveled to Indonesia to facilitate and advise on the transfers, and has been on site to evaluate their progress, as well as oversee the construction of the sanctuary. During the dolphins’ recovery and adaptation to their new surroundings, they are being closely monitored by our expert team of caregivers. We are not able to accept any volunteers. Keep following our social media and continue to check here for updates. 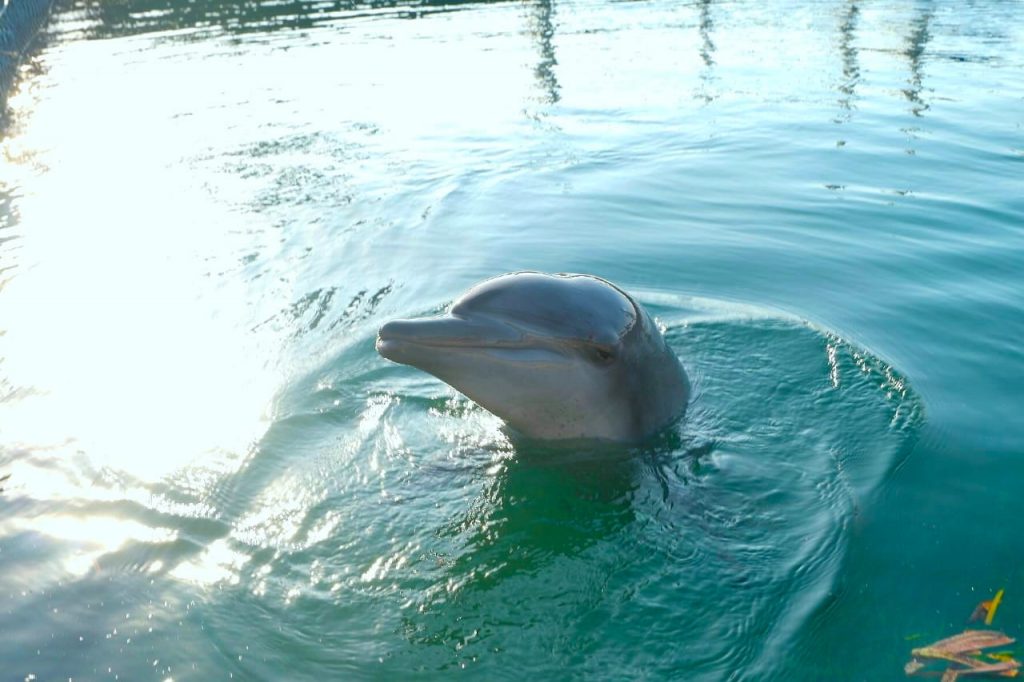 Rambo was torn from his family and pod members in the Java Sea during a violent capture several years ago. He was confined to a shallow chlorinated swimming pool at the Melka Excelsior Hotel in North Bali. His job was to entertain crowds of tourists who think it is fun to watch dolphins jump through hoops during loud theatrical performances. Rambo shared a tank with a dolphin named Gombloh, and the two dolphins formed a close friendship. Rambo and Gombloh, it seemed, became each other’s comfort in the bleak, dungeon-like surroundings. Sadly, Gombloh took his last breath on August 3, 2019, just two days before we were able to rescue and relocate Rambo. Hotel staff found Gombloh’s lifeless body in the morning, and we wonder what it felt like for Rambo to be confined in the same tank as his dead friend, possibly for several hours.

We rescued Rambo on August 5, 2019 and transported him to a temporary floating sea enclosure in Sanur. In the following weeks, Rambo gained weight and strength, and he bonded with Rocky, who was relocated to Sanur at the same time. The two of them are spending much time playing, socializing, and swimming together. In December 2019 Rambo and Rocky were transported to our sanctuary in Banyuwedang Bay, West Bali. There will be no more languishing in a small, barren concrete world, and no more theatrical dolphin shows to perform. All of that is behind him. Rambo is a younger dolphin who appears to be in good health, highly energetic and full of life. As such, he is a candidate to be sent to our Dolphin Readaptation Center in Kemujan, Karimun Jawa for release into his home range. Whether Rambo can be released back into the wild, however, remains to be seen. For now, he is enjoying the healing benefits of natural sea water and the ability to dive and swim. 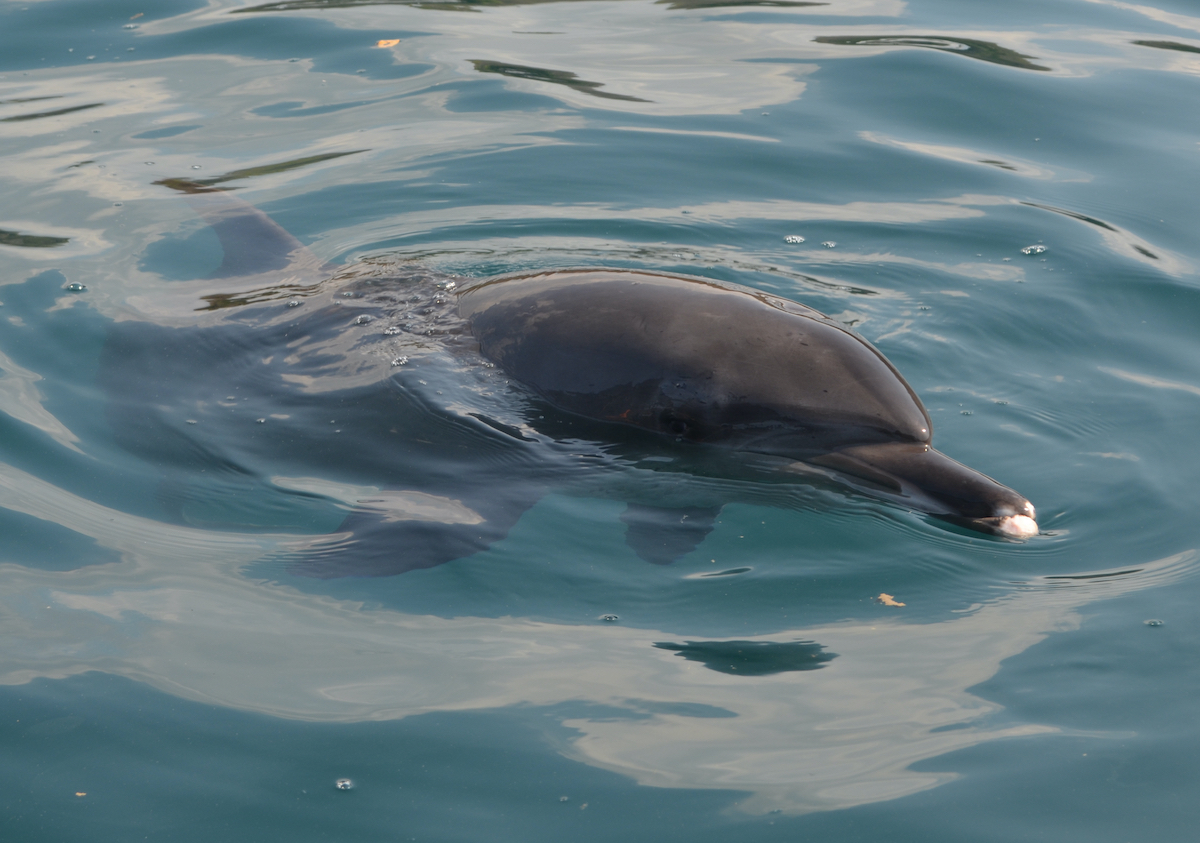 Captured in the Java Sea, Indonesia, Johnny is an older dolphin who lived several years in isolation inside a shallow swimming pool at the Melka Excelsior Hotel in North Bali. Crowds of people bought tickets to swim with him, and those were the only times he had any company. To make the water appear clean to paying customers, hotel staff added chlorine and other harmful chemicals. This hurt Johnny’s eyes so badly, he went blind. To make matters worse, Johnny has no teeth left. He also was critically underweight when we first found him. Furthermore, his right pectoral fin has been permanently damaged. At some point during his confinement, his pectoral fin got injured and infected. A piece of it was cut off to prevent the infection from spreading. Johnny was destined to spend the rest of his life trapped in the tank and dealing with tourists who want to kiss, hug, and ride him.

We rescued Johnny from the hotel and transported him to our Dolphin Sanctuary in Banyuwedang Bay in West Bali on October 8, 2019. Those years of exploitation in appalling living conditions caused too much damage for Johnny to be successfully released back into the wild. He now enjoys a well-deserved retirement in a large sea pen, where he can once again experience the natural rhythms and sounds of the sea. We are feeding Johnny a diet of high-quality fresh fish, and he is gaining weight and strength. The healing properties of real ocean water are having an effect: Johnny often expresses his joy with energetic jumps, and he spends much time swimming, diving, and playing with his friend Dewa. We will do everything in our power to ensure the rest of his life is filled with peace and dignity. 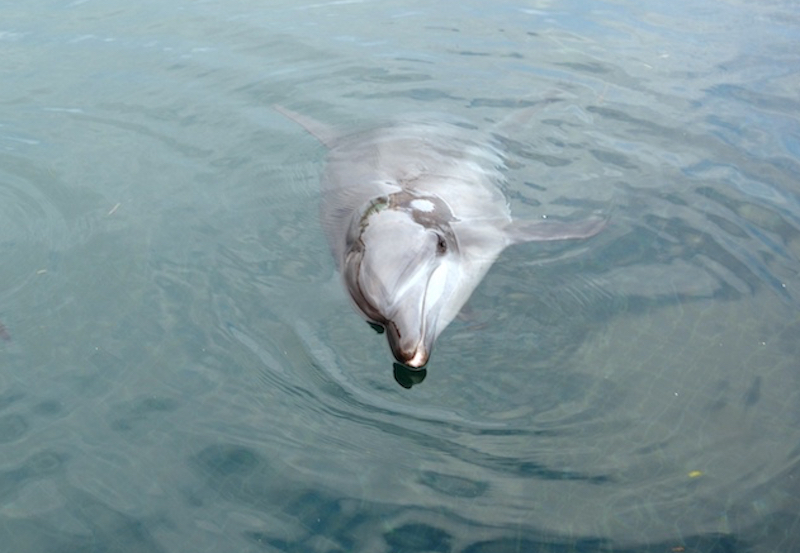 When Rocky was violently captured in the Java Sea several years ago, he lost everything that makes life worth living for a dolphin: his family, his world of sound, and the ability to swim freely in a vast ocean world. Rocky spent several years incarcerated in a shallow, heavily chlorinated swimming pool at the Melka Excelsior Hotel in North Bali. He was trained to obey commands and perform in theatrical shows that attract crowds of fun-seeking holiday makers. In between repetitive, rowdy shows, Rocky spent much time logging on the surface since there was nothing else for him to do. There is nothing to explore in a concrete tank, and Rocky could swim only a few feet before a wall stopped him. Confinement in such barren, unnatural surroundings took a heavy toll on Rocky’s well-being, and his future looked bleak and hopeless.

Thankfully, we were able to rescue Rocky on August 5, 2019, on the same day we rescued Rambo, and transported him to a temporary floating sea enclosure in Sanur. In December 2019 Rocky was transported from Sanur to our Dolphin Sanctuary in Banyuwedang Bay, West Bali. Here, in the crystal-clear water of a spacious sea pen, he can once again enjoy the natural rhythms and sounds of the sea. Rocky is benefitting from the healing properties of natural sea water and is gaining weight and strength. As such, he is a candidate to be sent to our Dolphin Readaptation Center in Kemujan, Karimun Jawa for release into his home range. Rocky loves to participate in boisterous, energetic play, and he especially loves to swim fast. He will never again have to perform tricks for food or experience confinement in a minuscule concrete tank. Whether Rocky can be released back into the wild, however, remains to be seen. 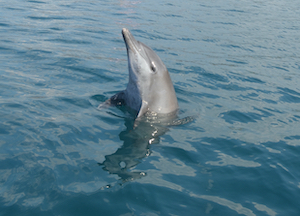 Captured in the Java Sea, Dewa was an older dolphin who was severely affected by the trauma he suffered during his confinement at the Melka Excelsior Hotel in North Bali. There, he spent years confined in the hotel’s shallow, heavily chlorinated swimming pool, exploited in a commercial dolphin-assisted therapy program for people with paralysis and other disabilities. Our rescue team transferred Dewa from the swimming pool to our Dolphin Sanctuary in Banyuwedang Bay in West Bali on October 8, 2019. Since we introduced Dewa to natural sea water, his condition improved but he was still plagued with several health problems including chronic pneumonia. Sadly, Dewa succumbed to his longstanding illness and took his last breath on March 11, 2020. 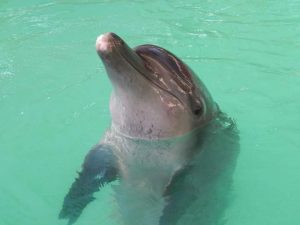 Gombloh was captured in the Java Sea and, sadly, did not survive his encounter with humans. Gombloh died at the Melka Excelsior Hotel in North Bali on August 3, 2019, just two days before our team was able to rescue Gombloh’s beloved companion Rambo. We are happy we arrived at the hotel in time to rescue Rambo, Rocky, Dewa, and Johnny from the shallow and heavily chlorinated swimming pools, but at the same time heartbroken that we got there too late to get Gombloh out of there. We will always remember Gombloh, who is one of countless dolphins to have fallen victim to consumers’ demand to watch dolphins perform and to swim with them.