There is No Beauty in Stolen Freedom

Our partner Empty the Tanks is committed to exposing the cruelty of dolphin captivity in Mexico.

For more than 30 years the captivity industry in Mexico has deceived us with their false claims and marketing. During these years they have ignored the scientific facts about the animals they are exploiting. It is important they acknowledge the complexities, emotions and intelligence of all cetaceans.

Empty the Tanks has a team of volunteers in place in Mexico to help us strengthen these efforts. These volunteers are working to educate tourists and locals about the truth behind these swim with dolphin businesses. They are also working with local hotels, dive shops, and other ecotourism businesses to help create a dolphin free community. 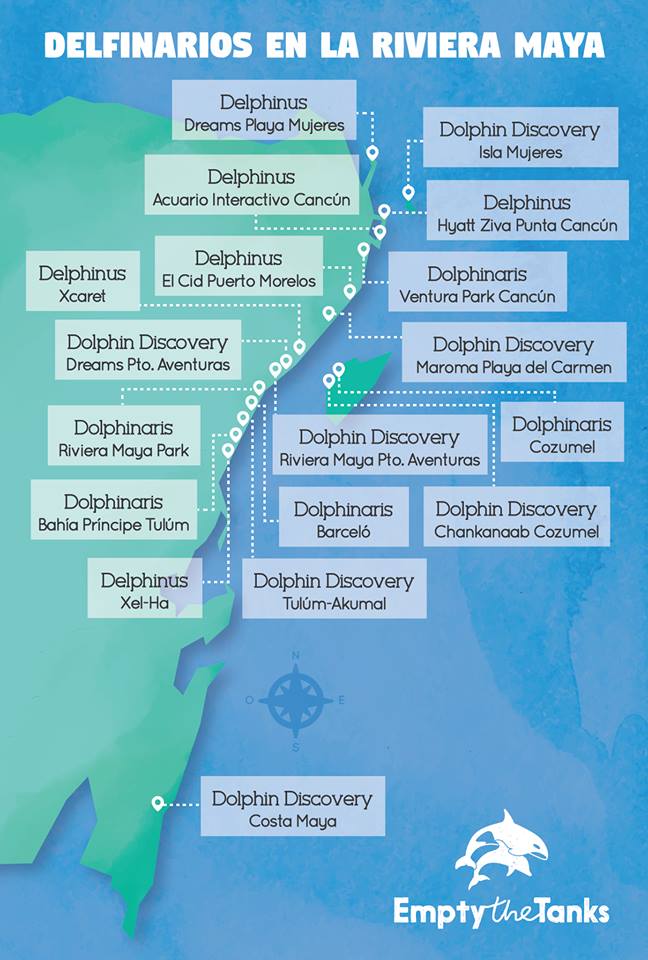 The dolphins in Mexico have gone without a voice for too long.

Recently, as part of the Empty the Tanks campaign we had volunteers in Mexico document the dolphin captivity facilities within the state of Quintana Roo. Quintana Roo is a tourism hotspot where locations such as Cancun, Playa del Carmen, Tulum, and Cozumel reside. The state of Quintana Roo is a little over 34,000 square kilometers and they have packed in 19 facilities that spend each day profiting off of the exploitation of dolphins. There are over 40 dolphinariums throughout the entire country.

There are three dolphin swim-with companies operating in Quintana Roo – Dolphinaris, Delphinus, and Dolphin Discovery. These three companies run the 19 captive facilities in the state.

A informative blog post was created to summarize the information we gathered from each company.

You can learn more about Dolphinaris by reading The Truth Behind Mexico’s Swim with Dolphins Industry.

You can learn more about Delphinus by reading Dolphins Exploited at Delphinus in Mexico.

Throughout our investigations, we have received tips and information from both current and former employees of the industry. These individuals are reaching out to Empty the Tanks because they are concerned about the welfare of the dolphins. 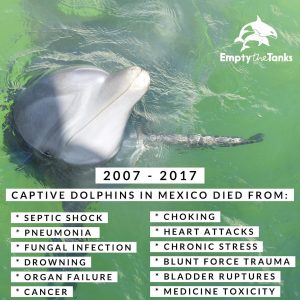 Throughout our investigations we have learned disturbing information, including allegations from people within the industry. We have submitted appeals and filed complaints to the PROFEPA and SEMARANT, the departments within Mexico’s government charged with overseeing the dolphinariums. One concerning thing we have discovered is the number of dolphins dying in captive tanks throughout the country, and the causes of those deaths. We have learned that captive dolphins are dying in Mexico’s from pneumonia, septic shock, fungal infection, choking, heart attacks, chronic stress, cancer, organ failure, drowning, bladder ruptures, toxicity to medicine, and blunt force trauma. Sources from within the industry have also come forward with distressing accounts about the health of dolphins in the various facilities. We have been told by those working at these facilities that dolphins have extreme lung and eye issues due to the harsh sun and chemicals they are exposed to in their tanks. We have also been told that most of the dolphins have problems with their internal organs because of the medications they are given on a daily basis.

We urge you to never support dolphin captivity, and please never pay to swim with captive dolphins while on vacation.

Traveling to Mexico? Check out our new Ally for Dolphins program!

You can help us continue our important work on behalf of the dolphins in Mexico by making a donation today.