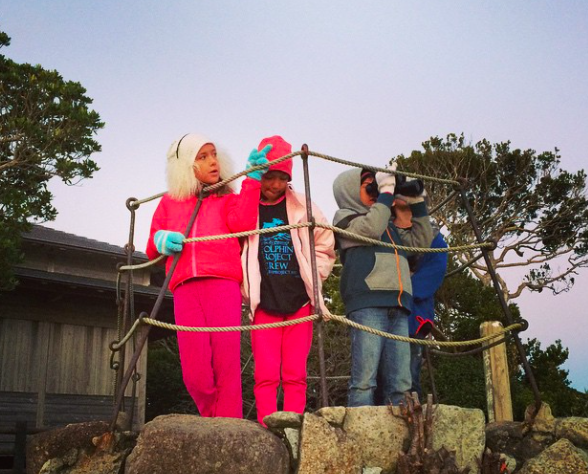 As Nelson Mandala said, “Education is the most powerful weapon you can use to change the world.” These brave kids – students from Thailand who have joined the Dolphin Project in Taiji, Japan – are the future of activism. More proof that the ‘future’ starts today.

First day in Japan after a very long plane and train trip. It is very cold here and our teeth keep chattering and our fingers keep getting numb. This afternoon we were pulled over by the friendly police and told to follow them to the police box where there found out why we were here. We all went down to the Cove for the first time. It felt very strange and I thought one of the red rocks was splattered with blood but it wasn’t. It was strange being there in the place, The Cove, where it all happened. In the movie, ‘The Cove,’ we saw dolphins being slaughtered right where we were standing but today it was very calm, peaceful and beautiful. ~ By Ashley.

Today we went to the Whale Museum. We saw Angel and Mole and sang to them. They were kept in a super tiny tank over a little hallway. There were sea pens outside that had dolphins in them. Sometimes during the day they are used for shows. The sea pens are right next to the wall where the ‘wild’ is. Today was sad because we saw the people that were training other people for shows, whack a dolphin. She tried to make it do a trick and since he didn’t, she whacked him under his mouth. ~ By Connor Early this morning we decided to check out Katsuura. No one else came with us because they said it was too cold – BRRRRR! We walked down to the harbour and saw loads of people so we went over to look. They were selling all sorts of stuff but mainly fish. We saw a really big orange fish. It’s a pity it is still not swimming in the ocean. A very friendly lady asked us to join her for some Japanese tea and it tasted really nice. This afternoon we drove to the beautiful Nachi Falls. We were so excited when we stepped out of the car because it was snowing! Some of us lit sticks and made wishes at the temple area. The area around Nachi Falls was really beautiful. ~ By Jack and Ashley Woke up at 5:15 a.m., were in the car by 5:45 a.m. and drove to the harbour in Taiji, to wait for the hunting boats to go out to sea. Twelve boats went out to look for dolphins. Next, we went up to the lookout point which had beautiful scenery, but it was freezing! We were up there for a few hours, looking to see if the boats would get into drive formation. If they did, that would mean they had found dolphins. The boats started to come in so we drove and parked on the side of the hill, waiting until all of the 12 boats came back. YAY! It was a Blue Cove day today!

“My wish came true. Yesterday on the mountain at Nachi Falls, I bought a luck stick and wished that today would be a blue cove day.” ~ Connor

“Cross your fingers for tomorrow.” ~ Molly

This morning we went to the harbour and counted how many boats went out = 12. We drove up to the lookout point, but by the time we got there, the boats had disappeared towards the horizon. After about an hour we saw a formation of boats coming in and a pod of dolphins between them. Some of us went to the Cove and others went to the tsunami lookout point. It was a pod of Risso’s dolphins which included a mummy and a baby. They fought hard and escaped three times but the boats went in front of them and stopped them. The fishermen banged on the sides of boats with poles and there was loads of black smoke when the boats were driving backwards and forwards.

After 10 minutes we realized that not all of the boats were around the Cove but then we saw another formation on the horizon which had discovered another pod. They drove the other pod in and circled it. After about one and-a-half hours, the Risso’s dolphins were driven straight into the Cove and were netted up. The dolphins were trapped and tortured by the fishermen. After they were driven into the Cove, tarps were pulled over the shallow bit of beach and we could not see anything. After a while, we spotted two skiffs transporting dead dolphins wrapped in blue tarps. The skiffs then went to the butchery where the dolphins were going to get cut up. They will use them for dog meat and fertilizer. They are killing one animal to feed another.

Today was terrible, because today we actually saw them torturing the dolphins by banging things in the water to scare the dolphins into the Cove. ~ Lou Risso’s In The Cove
Photo: DolphinProject.net

I was upset because this morning we were praying for it to be a Blue Cove day but it was a Red Cove day. ~ Jack

As a Cove Monitor, educator of 23 years, and teacher of these children, I would like to say how incredibly proud I am of all the mini Cove Monitors from Gecko. The children have been working on dolphins and captivity for six months now. I am amazed at how well the children respond to and cope with the dolphin drives. Actually, they cope far better than myself in this situation.

The children are our future, and I constantly instill in them they are not too small to make a difference. Experiencing something first hand and seeing it with your own eyes is the most powerful learning experience anyone can ever have. If we all look back on our own education, what do we recall? We all remember our school trips and camps and I know these kids will never forget their experience of being cove monitors and one day in the future, can proudly say, “I contributed to halting the slaughter of dolphins.” – Celi /Gecko Community.

PLEASE CONSIDER JOINING RIC O’BARRY ON THE FRONT LINES IN TAIJI AS A COVE MONITOR, OR MAKING A DONATION TO SUPPORT OUR CAMPAIGN.

On November 4th, the Dolphin Project will once again welcome our Mini Monitors back to Taiji, Japan. It will be the third
read more
Japan 23Oct