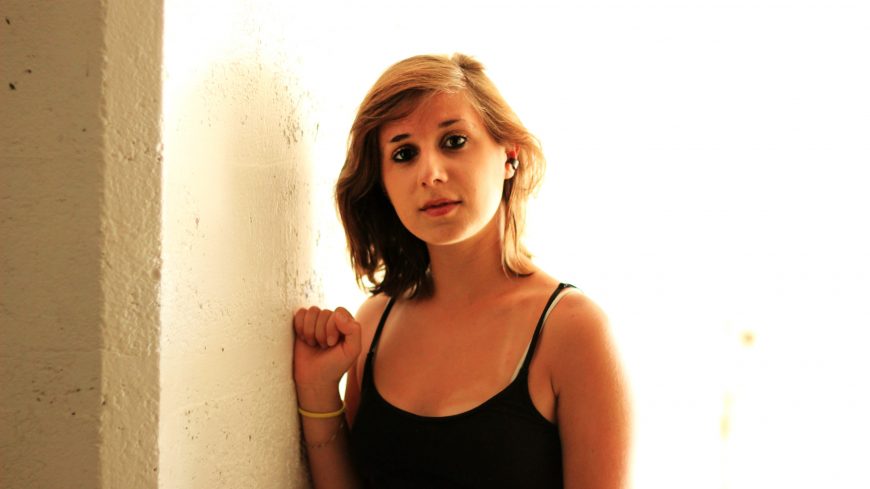 Scheduled to premiere on the opening night of this year’s Superpod5 gathering in the San Juan Islands of Washington, Katie Emmons’ strong voice for cetaceans is set to take center stage on July 18, with the debut of her documentary ‘Voiceless’ at the San Juan Community Theatre.

Four years in the making, the now 21-year-old Emmons from Wells, Vermont was still in high school when the idea of speaking out for whale and dolphins through film first began. Her journey, however, had commenced much sooner than that:

I first saw ‘The Cove’ when I was fourteen years old. That was my first encounter with what dolphin and whale captivity was, and that was the first time I had ever heard of a dolphin slaughter. It was essentially my ‘ah-ha’ moment, and it quite literally changed my life. I went from a curious teenager to a dedicated young adult advocate who wanted to lend a helping hand however she could to ending the slaughter in Taiji.

Along with her sister, Emmons formed ‘Blue Freedom‘, an international student group whose purpose was to reach out to young people and inform and educate them on how important it was to keep whales free and to respect them in their natural habitats.

Blue Freedom currently has two highly successful campaigns in motion. Their Change.org petition for Tilikum, the orca held captive at SeaWorld of Orlando, snowballed to over  230,000 signatures and is still going strong.

“Thanks to the wonderful awareness the film ‘Blackfish’ raised, our petition for Tilikum’s release to a coastal sea pen is one of Change.org’s most popular petitions of all time,” Emmons said.

A second campaign commenced after she and her family took a vacation to Disney World in Florida:

After everything had already been booked and paid for, I stumbled upon an obscure page deep within the Epcot section of Disney’s website that informed me of their “swim with dolphins” program. I was shocked—there were captive dolphins at Disney? Too late to make cancellations or change our itinerary, I packed my handy-cam and made a point of filming my observation’s of Epcot’s “The Seas with Nemo” exhibit, where these four, former military dolphins are held.

I filmed a short video of the conditions in which these dolphins lived, filmed a clip of myself talking about it when I got home, and together our group launched the petition. I was contacted almost immediately by a senior campaigner at Change.org, who interviewed me over the phone about our petition for the release of the “Disney Dolphins”. A press release went out and our story ended up on the front page of Huffington Post Teen.

When Disney’s, ‘Finding Dory’ movie was released earlier this year, it bore a strong anti-captivity message that appeared at odds with Epcot’s own dolphin encounters program.

“We’re urging Disney to walk their talk and phase out their dated captive dolphin program,” Katie said. “Not just phase it out, but to end it with grace and set a beautiful and forward-thinking example to the rest of the world about what it means to respect our planet. Having grown up on Disney’s environmentally-inspired animations, I can’t help but feel that this is what Walt Disney would have wanted — to see his park aligning with the messages they so beautifully communicate in their films.”

According to Emmons, the idea for ‘Voiceless’ occurred during a brainstorming session with her team:

We’d spent loads of energy and time researching, interviewing, and writing about this issue, but for us there was just something missing; we knew there was more we could do, and we were eager to find a way to coherently put together all the powerful information on the captivity industry that had so impacted us. That’s when someone said “what about a film?”

There were just a few minor obstacles to contend with. They had never made a film before, they were all broke high school students, and there were numerous existing documentaries out there. “But we were passionate about this,” Katie said. “We had devoted ourselves to this idea that we could make a difference—a BIG one. Kids and young adults are, after all, the main demographic purchasing tickets to marine parks and swim-with-dolphins programs. We had yet to see a documentary or film on this particular topic that was directed to the audience that was holding the key to ending this: young adults. That became our motivation.”

Blue Freedom already had the research and they knew they wanted their film in a similar format to the documentary, ‘KONY 2012‘. Of paramount importance, however, was the content of the film. They wanted it to be, “short, impactful, free and accessible to all.”

But they were still broke.

Katie and her team launched a fundraiser on ‘Kickstarter‘. From film company quotes they knew they needed around $16,000 to achieve their vision for the film. “We had thirty days,” Katie said, but they needed just ten to hit twenty thousand dollars. It placed their project on the top of Kickstarter’s “most popular projects” list.

The campaign was a huge success, and it permeated to us even more that as young adults, we could make a massive difference. We worked with students, artists, scientists, activists, and researchers, traveled all over the country to film interviews, and donated years to making this dream of ours a reality. We believe in this cause and this film, and the impact we hope it will have on our generation — Katie Emmons.

With this year’s theme for Superpod5 focusing on “The Future”, the premiere of ‘Voiceless’ is perfectly poised to kick off five days of educational-based activities centered around cetaceans, both wild and captive. The film features several high-profile experts, all of whom Katie interviewed for her documentary, including her hero, Ric O’Barry:

I literally would not be where I am today if I had not seen ‘The Cove’, and been so inspired by Ric’s passion for shutting this slaughter in Taiji down. I remember sitting there in my living room with my family, watching the closing scene of Ric walking through the IWC meeting with a TV screen strapped to his chest and thinking “I want to be a person like that.” It was a chilling, defining moment for me. Getting to sit down with Ric and interview him for ‘Voiceless’ was an amazing privilege.

Four years of work will culminate at 7 PM Monday, July 18, at the San Juan Community Theater, San Juan Island, Wa. This will be followed by a Q&A with the ‘Voiceless’ director herself.

“We are very, very, very excited,” Emmons said. “It’s going to be great to be able to share this film with so many amazing people who supported us and helped make it possible. Our hope is nothing more or less than a young adult watching this, being inspired to help end dolphin and whale captivity, and sharing it with their friends and classmates. We hope it speaks to hearts, and in the process, changes the world.”

Katie and her team are already changing the world and they don’t plan to stop at the premiere. “After Superpod I’ll be heading home to get started on sending out Kickstarter Backer rewards with the rest of our group,” she said. “We’ll be launching ‘Voiceless’ on ‘YouTube’, screening it in classrooms internationally, and giving accompanying talks about how students have the ability to 1) end the slaughter (by ending the captivity industry) and 2) make a global impact—no matter how young they are.”

I’d like to congratulate Katie on her first documentary and I hope everyone will see it and support it. Katie is a great example of how high our youth can fly when they have passion.