With Ric O’Barry on Patrol in Taiji 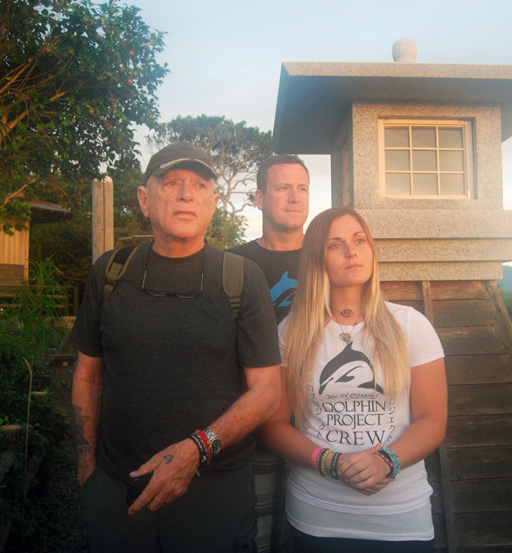 So what is it like being a Cove Monitor in Taiji?

Since The Cove movie arrived in theaters in Japan, Ric O’Barry’s Dolphin Project has had a set of volunteers in Taiji every hunt season, which lasts six months.  The Cove Monitors are not here to interfere with the dolphin hunts nor to harass the dolphin hunters nor to break any laws.

The main goals of the Cove Monitors are to:

• Represent Ric O’Barry and the Dolphin Project on the ground in Taiji during the hunts.

• Report to the world, via our blogs and social media, and any mainstream media we can interest, in what is happening in Taiji and to expose the lies and cover-ups of the Japan Fisheries Agency.

• Make local contacts with people in Japan to spread the word about the Cove and the dangers of mercury-contaminated dolphin meat.

• To let the Japanese government and the dolphin hunters know that the world is watching what they are doing.

Cove Monitors also help us undertake special projects, such as obtaining dolphin meat to test for mercury, other pollutants, including radiation from the Fukushima Nuclear accident.

This year, we will be making a special outreach to people in Taiji about alternatives.  We know the hunts are getting fewer and fewer dolphins, so we want to see if any of the local fishermen or town council members will talk to us about possible alternatives that the Dolphin Project could help them with, such as whale and dolphin watching trips, eco-tourism, sustainable fishing, or other inducements to stop the hunts.

Being a Cove Monitor is not for everyone.  You have to get out of bed at 4:30 AM to head out to see if the dolphin hunting boats (the “banger boats”) have left port.  If they are out, our Cove Monitors wait for them to return, hopefully without any dolphins.  The weather in Taiji is very changeable, from very hot and humid in the fall (with frequent wet storms and even typhoons) to cold winter days (snow is rare, but our Monitors are exposed none-the-less).  If indeed a drive hunt develops, the Cove Monitors then head to the Cove overlook, to estimate numbers of dolphins killed and captured for aquariums.  They document the hunt with video and still photos.  The hunts are usually concluded by 2 PM, when the tired Cove Monitors can return to their hotel to write up a blog and edit video and photos.  Cove Monitors will also use the afternoon to check the status of captive dolphins in the Taiji Whale Museum, Dolphin Base or the sea pens in the Taiji harbor.

A captive dolphin, ripped from its family, jumps in one of the sea pens in Taiji harbor.

The dolphin hunts themselves are quite horrendous and take an emotional toll on our Cove Monitors.

And every year, the dolphin hunters and the town of Taiji try to make our jobs harder.  Last year, the parking lot across from the Cove was put off limits to our cars, so now we have to park a few hundred feet away and walk to the Cove.

Just a couple of days ago, we went up to the top of the overlook over the Cove, where our Cove Monitors count the number of dolphins and identify the species of dolphins being killed.  But today, to our surprise, the town of Taiji closed off the trail with a locked gate, put up overnight, blocking access due to “construction.”  We asked the police when we could get access to the overlook, and they said they did not know.

Ric and Arielle discussing the drive hunts on the overlook to the sea in Taiji.

This is egregious for many reasons.  Most important, the overlook is an emergency retreat to higher ground for the people of Taiji in the case of tsunami or flooding due to typhoons, etc.  But now, they will not have any access to the route!   As Tim Burns put it, it is incredible that the town of Taiji would endanger it’s own citizens for the purpose of preventing us from documenting the killing of a few dolphins.

Tim Burns, our volunteer Cove Monitor Coordinator, at the new gate blocking access to the overlook of the Cove and also preventing evacuation to higher ground for local Japanese in case of tsunami and flooding.

Closed signs on the gate that appeared overnight blocking access to the Cove overlook.

The granddaddy of our Cove Monitors, of course, is Ric O’Barry, who has been to the Taiji Cove repeatedly since 2003.  These next few days that Ric will be here is an opportunity for us all to learn how to be a Cove Monitor from the man himself.  We also have Tim Burns, our Cove Monitor Coordinator, who has volunteered his time for the past few years to lead our training and scheduling of Cove Monitors with our staff at the Dolphin Project.

Ric at the Taiji harbor, watching a dolphin drive boat come back to port, this time without any dolphins.

I asked Ric about what he felt the value was of the Cove Monitors for the Dolphin Project.

“It’s like the tree that falls in the forest,” Ric replied.  “If there’s no one there, did it really fall?   For too long, the Taiji hunts have gone on unremarked by the rest of the world.  Even the Japanese do not know these hunts were happening, at least not until The Cove documentary and our Save Japan Dolphins Campaign brought the truth to the people.  Our Monitors keep the world aware of what is happening – they keep it in the news and on the Internet.”
Arielle sings her song The Impossible for Ric at the Cove, this time without shouted insults from the extreme nationalists.

Tim Burns agrees: “The importance of our Cove Monitors is public awareness.  The more we expose the secrets of the Cove and the dolphin hunts, particularly here in Japan, the more people will question what goes on here.  They will not be able to ignore it.”

Our Monitors also keep the pressure on the dolphin hunters.  They know they are being watched.  They go to elaborate steps to hide from our cameras and complain bitterly about our presence.  They waste taxpayer money to demand police protection from us who pose no threat.  They know now they cannot continue on with business as usual.

And all the while, their markets for mercury-poisoned dolphin meat are drying up.  Fewer and fewer people will buy the stuff.  And as a direct result, fewer dolphins are dying.

Ric and the Dolphin Project Team are going to be here in Taiji until the dolphin hunts end.