We Are Family: First Pod of Pilot Whales Terrorized in Taiji 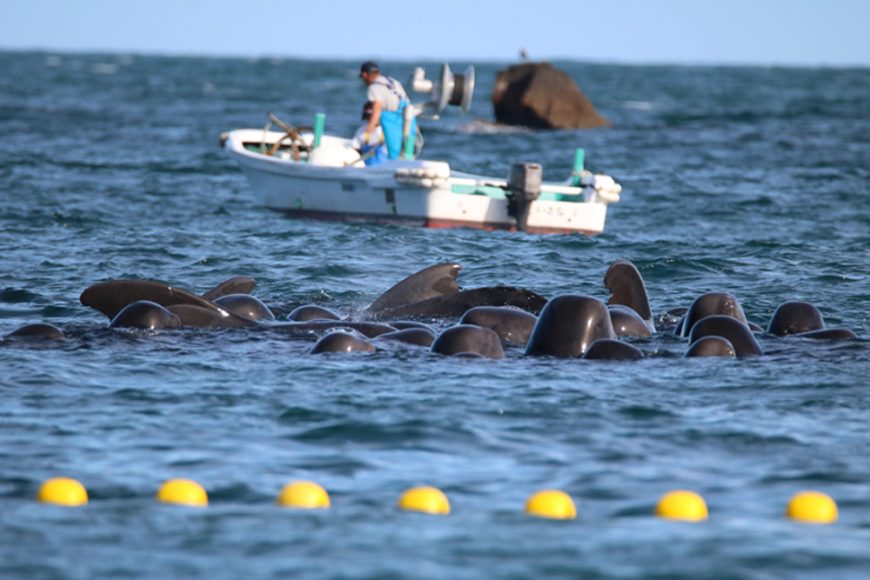 I am shocked by the drive we witnessed today of 50 or more pilot whales. I could see them spyhopping at the nets, trying to figure out what was happening. The matriarch was swimming through the pod, checking on everyone, while babies clung to their mothers and big males swam in circles. All family members were tightly bound together for protection and comfort.” ~ Cynthia Fernandez, Dolphin Project Cove Monitor

There is a moment during each and every drive, where we feel a glimmer of hope. Perhaps it’s just a part of the human condition, where we as individuals, as well as collectively, want to believe that the hunters won’t find a pod of dolphins. Today, we were clearly shown that this concept of “hope” isn’t just reserved for humans. The pilot whales themselves, in the midst of their terror and uncertainty, kept comforting one another, perhaps in an effort to instill hope.

The terror began to unfold around 9:00 a.m., local Taiji time, when the boats started to drive a pod of pilot whales into the cove. At one point, we witnessed either two pods being driven in separately, or one pod which had split into two. One large group of dolphins was held just outside the cove while the second drive took place. About 50 pilot whales were finally forced inside the cove, and at that point, we could see a large number of babies and juveniles. The pod swam tightly amongst one another, with tiny heads poking out beside the larger adults. At one point, the matriarch rolled onto her back and swam through the group,  interacting with each youngster, while the large males swam around the periphery of the pod. Everyone was spyhopping and their panic and confusion was palpable.” ~ Vicki Kiely, Dolphin Project Cove Monitor

The ropes were drawn, ensuring escape would be impossible. And then – everyone left. The day was done. At the time of this first update, the pilot whales are being held overnight in the cove. Lights are on, and signage is up, stating the whales are property of the fisherman. We will be back at 4:30 a.m., local time to document the fate of these sentient creatures. Please check back for updates.