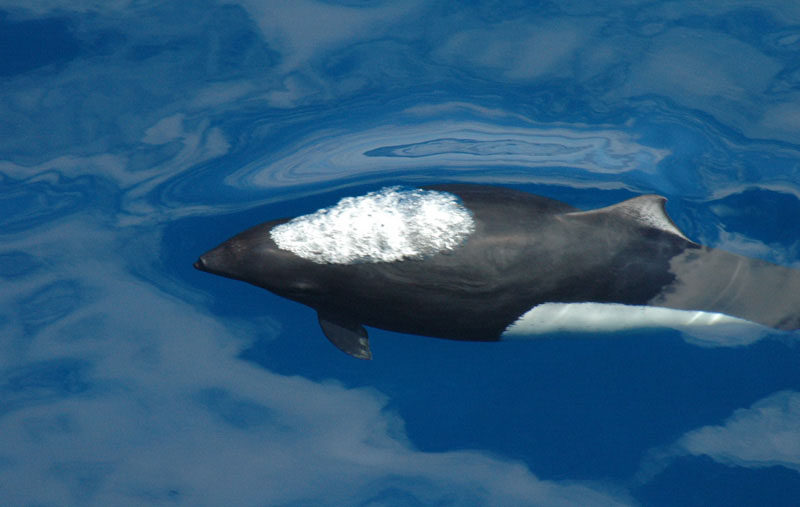 Given their energetic, high-strung nature, and need for vast open seas, it’s not surprising Dall’s porpoises have a very poor track record in captivity. These speedy, pelagic porpoises are found throughout the Western and Eastern Pacific, occasionally approaching boats to ride the bow waves in pods of 2-20 members. Like black and white bullets, Dall’s are one of the fastest cetaceans, clocked at speeds of 30 knots (34 miles per hour/54 kilometers per hour). While there have been several unconfirmed reports of Japanese facilities capturing Dall’s prior to the 1950’s, genuine attempts to keep the porpoises in a captive setting began, and ended, in the 1960’s.

The first recorded instance of a Dall’s taken for an aquarium was on November 27, 1956. A six foot long, 225 pound male was captured off Catalina Island in southern California, and rushed to Marineland of the Pacific of Palos Verdes, transported on a padded stretcher with water and covered in a wet blanket. 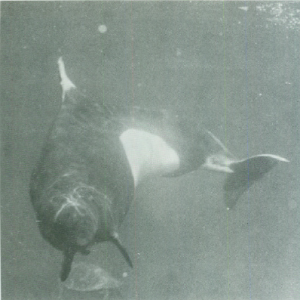 Male Dall’s at Marineland of the Pacific, 1956. © Stephen S. Leatherwood.

According to the Bridgeport Post, Marineland staff had administered injections of Meticorten, a tranquilizer, in order to “counteract shock.” Three Marineland divers had to guide the sensitive animal around the tank, preventing him from injuring his head. The traumatized porpoise was then placed into the same tank as the park’s Pacific white-sided dolphins, where he proceeded to batter himself relentlessly against tank walls before slowly sinking. The Pacific white-sided dolphins reportedly dove to the tank floor to bring him up to the surface, saving him from drowning. Ken Norris, renowned marine biologist and then curator of Marineland of the Pacific, made a last ditch effort to save the porpoise by having staff construct an improvised sling to suspend him in one of the smaller pools, but their efforts were in vain. The world’s first captive Dall’s porpoise perished in less than twenty four hours.

Marineland gave it another go in 1972; from February 29 to March 21st, eight were captured. Four died shortly after captured or in transport due to shock; the other three died within 60 days. The male captured on March 21st fared better and would live for 15 months in captivity. By November, he was put on display with a Northern Right Whale dolphin. Marineland staff disclosed to Valley News both animals were undergoing training.

Following this episode, the Dall’s were nixed off the list as potential marine park attractions. The United States Navy, however, had other ideas: neurobiologist and head vet for the Marine Mammal Program, Sam Ridgway, wanted to learn more about the porpoises’ physiology, especially regarding their deep diving abilities. From 1964-1966, four porpoises were caught for the program.

Incorporating a modified hoop net, the newly-hired animal collector Morris Wintermantel gave his unique method of “bagging” a whirl on the first unwilling draftee on May 26, 1964, off Anacapa Island. Here, the net would encase the animal until it drew out the end of the line and exhausted itself. The capture did not go smoothly: the line attached to the netted porpoise became entangled in the boat propeller, and the line dug into the porpoise’s tailstock. 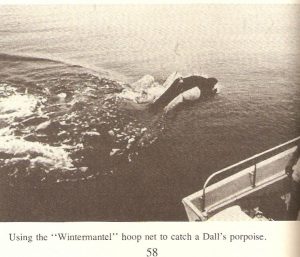 The bag-netting technique. From “Marine Mammals and Man” by Forrest G. Wood, scanned by the author.

After a three-hour boat ride back to Point Mugu, California, the Navy’s first porpoise, a male, was kept in a 50-foot diameter concrete tank in shallow water, along with two bottlenose dolphins. Most likely disoriented and traumatized, he made a bee-line for the tank wall, pounding into it, then dove with great force towards the tank floor. Even with an attendant in the water to prevent him from slamming into the walls, he continued to behave erratically for thirty minutes before he was caught and put into a harness, attached to a shock-cord as a makeshift leash. He swam strongly throughout the night, but was found dead the following morning, dying from trauma and internal bleeding, due to the constant battering.

The Navy had made more progress with porpoise no. 2, captured off of Santa Cruz. She was placed into the same tank, this time, with a Pacific white-sided dolphin. The female porpoise avoided the walls and swam in figure 8’s, occasionally needing a push from a caretaker whenever she began to sink or stopped swimming. She did not eat the mackerel and squid offered to her until the third day. By the first week, she became more docile and took her food from the attendants’ hand. It was learned then that Dall’s were constantly sloughing their skin, which became more apparent in the captive environment. With the lack of space to swim fast and freely, no. 2’s skin appeared patchy and scaly, but a scrubbing with a sponge alleviated the problem. The optimism was short-lived: by the 13th day, she began to lose weight. The white-sided dolphin was removed, as he began to assert his dominance over her, pushing her against the tank wall and preventing her from getting fish thrown into the pool. She was then given antibiotic and vitamin injections after her white blood count rose significantly, and for a short time, the intervention worked. 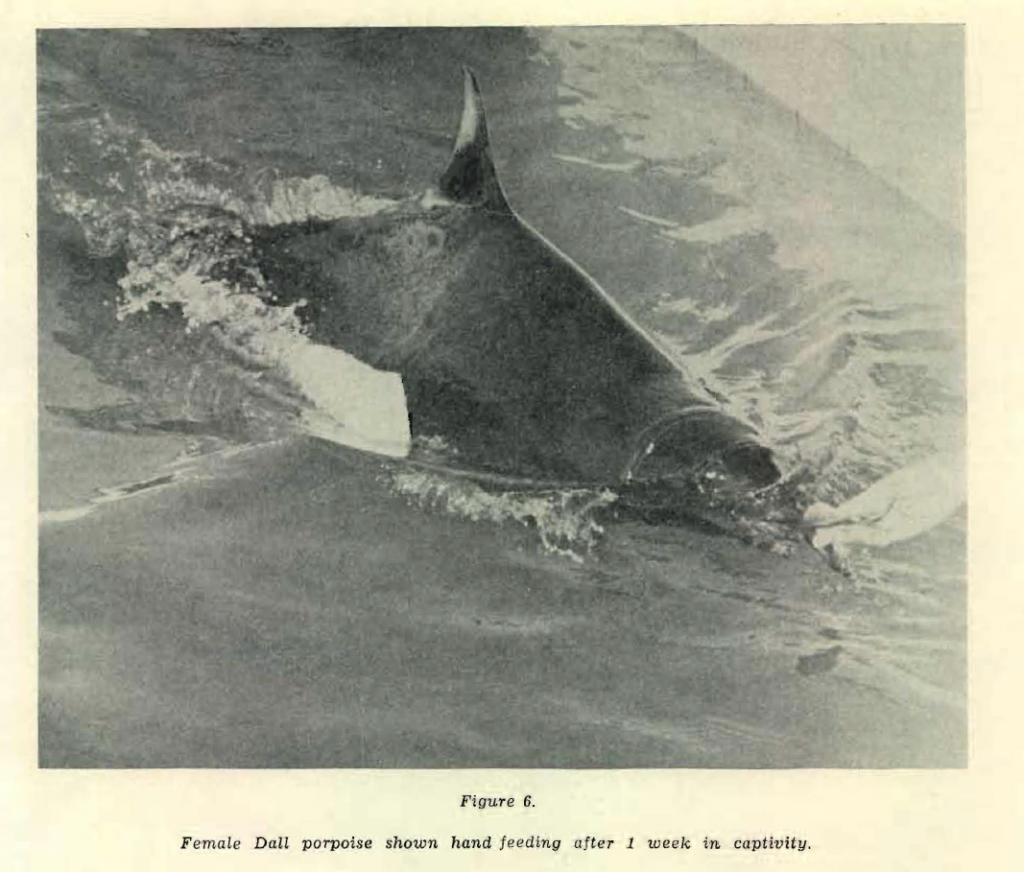 From “Dall Porpoise: Observations in Captivity and at Sea” by Sam Ridgeway

On day 26, she began to weaken during the course of the afternoon. She became distressed, keeping her head well above water and appeared to try to get out of the tank. Attendants were called to support her, but by 5:30 p.m., she began to vomit blood, made loud, gurgling noises, and died. Her necropsy showed she perished from a massive lung hemorrhage, and revealed she was pregnant with “a well-developed fetus.” 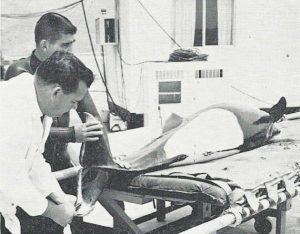 Marty on an examining table, having blood drawn for a health check. From “Mammals of the Sea: Biology and Medicine” by Sam Ridgway, author’s scan.

The last two porpoises – a male and female – were caught together from the same pod on April 21, 1965, again, off Anacapa Island. Once in a tank, they swam without hitting the walls. Hydrophones were placed into the water, but they were met with silence until two days after capture when the porpoises began to take food. Suddenly, the water came alive with bursts of low-frequency clicks as the two porpoises communicated. But even with constant medical exams, the female began to falter 17 days after capture. Despite an intervention of antibiotic injections and a gastrointestinal sedative administered through a stomach pump, she was found dead on day 26. Once again, a necropsy revealed she was pregnant with an almost mature fetus. Her left lung showed signs of a severe respiratory infection, compounded by the stress of capture and captivity.

The remaining porpoise, now nicknamed “Marty,” fell ill two days after his companion’s death. Ridgway and his staff ranked up their efforts with aggressive therapy, consisting mainly of antibiotics and vitamin shots. Marty bounced back within a week, and by June, he regained most of his weight lost during his illness. Shortly afterward, training Marty began in earnest. Recounted by Ridgeway’s former lab technician, Deborah Duffield, the porpoise was far more difficult to train than a bottlenose. Although she was not a certified animal trainer, this was the same woman who spent her time and energy into training the rebellious and aggressive bottlenose, Tuffy (or Tuff Guy), who would later end up as the Navy’s “most valuable animal:”

Overall, he shows a great deal of nervousness and irritability when made to respond to something new to him. Because of this tendency to become upset, I introduce everything very slowly, requiring only a little of him at a time. The animal seems to take time to realize what is being asked of him. He rapidly falls into behavior patterns and when learning anything new, will go through these over and over. Often in training, I have to start with one of these behaviors and modify it to what I was after, rather than starting a new response.” 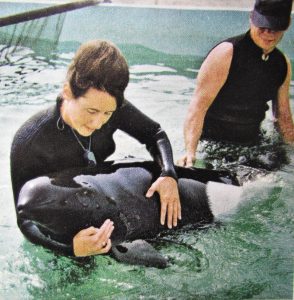 Deborah ran into much difficulty to get Marty to slow down. In the wild, Dall’s swim almost nonstop; while they have been observed doing a “slow rolling” behavior, typically when feeding, logging and resting behavior have never been witnessed. She admitted she was not strong enough to get him to stop, due to his high energy, and only got him to “on his own accord.” Gradually he did learn to do so, and “stay regardless of what was being done to him.” The training was not without its quirks as he was was generally a nervous and irritable cetacean, and “reluctant to touch objects with his head.” Deborah elaborated when he became frustrated at what was being asked of him, he would “list,” a behavior uniquely seen in Dall’s. Or, he would roughly bump her or other trainers with his flukes as he darted by them.

After two months of training, not only did Marty learn to stop, but learned to approach the trainer on signal, allow himself to be rolled to his side and be rubbed down by Deborah, and tolerate a harness. In addition, he learned to respond to an acoustic signal. Unfortunately, he did not reach the point where he could be released into open water for more advanced training. Lasting only 21 months in captivity, he died on January 2, 1967. At his necropsy, he had numerous ulcers in his second stomach as well as lung abscesses. With his death, the Navy lost interest in Dall’s, coming to the conclusion it cost more to keep them alive and was far too difficult to train them. 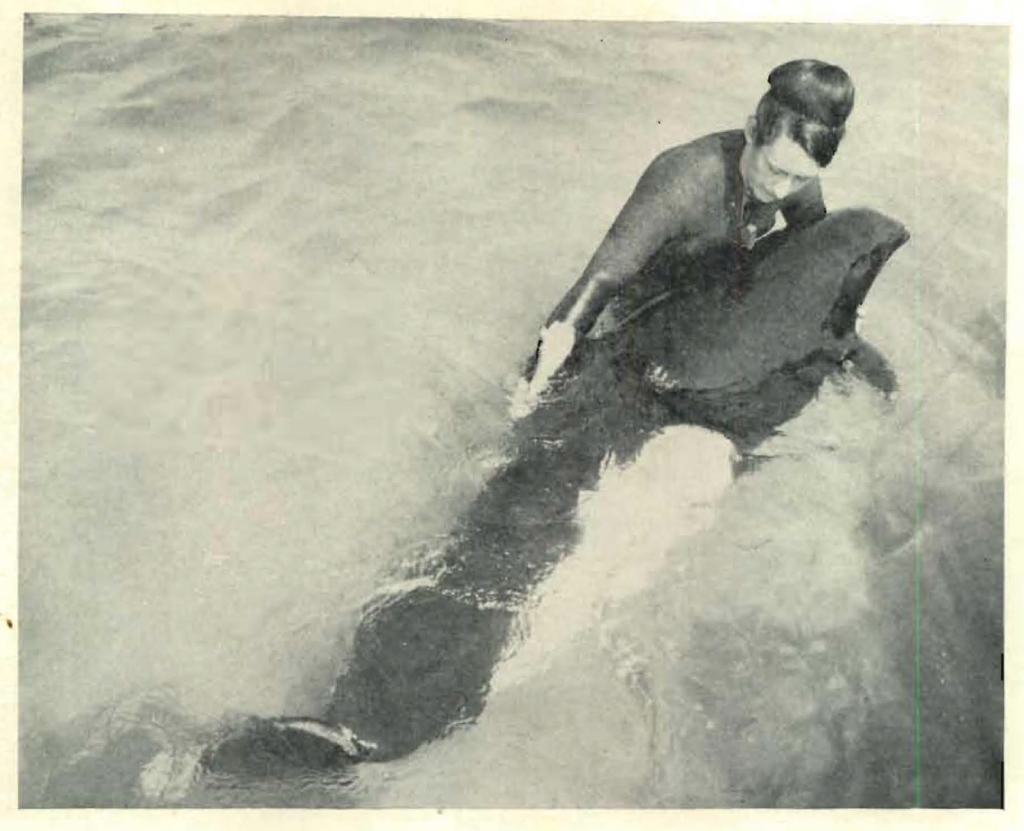 Deborah Duffield with Marty for a rubdown, 1965/1966. From “Dall Porpoise: Observations in Captivity and at Sea” by Sam Ridgway.

Over the past 30 years, most Dall’s that have appeared in captivity were stranded individuals. Some notable cases include:

Thanks to Porpoise-Princess for behavioral information and the stranded calf taken to Otaru Aquarium.

Images and information referenced in this article were from Marine Mammals and Man (1973) by Forrest G. Wood, and Dall Porpoise, Phoceonoides dalli (True): Observations in Captivity and at Sea (1966) by Sam Ridgway.