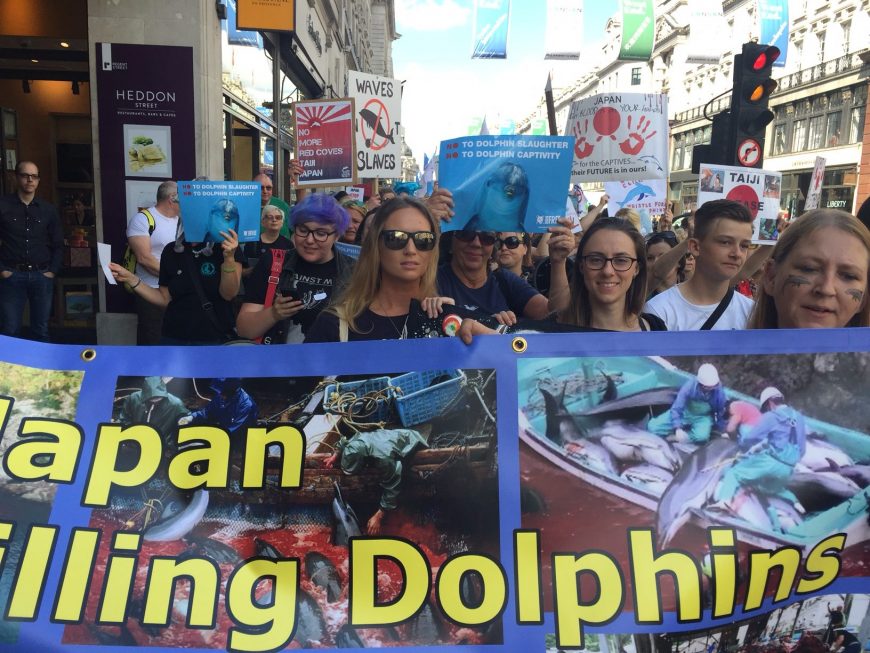 A big SHOUT OUT to everyone who lent their voices on behalf of dolphins on Japan Dolphins Day. Approximately 40 events were held across the world on/around September 1st, showing Japan that ENOUGH IS ENOUGH!

What’s happening in Taiji, Japan? – Between the months of September and March, an annual slaughter of dolphins takes places off the coast of Taiji, Japan. This year, an “official” 1940 dolphins of various species including bottlenose dolphins, striped dolphins, Risso’s dolphins, Pacific white-sided dolphins, pilot whales, false killer whales, pantropical spotted dolphins, rough-toothed dolphins and melon-headed whales will be subject to harassment, injury, capture and slaughter — all in the name of greed and ignorance. Many more dolphins will be killed in the process of the hunts, their numbers never recorded. Learn more about Taiji’s dolphin hunts.

Did you know – Dolphin Project is the only organization who has been on the ground at The Cove since 2003, documenting the dolphin hunts?

For Dolphin Project, every day of the dolphin hunts is Japan Dolphins Day – Our team of Cove Monitors will be there throughout the entire hunting season, broadcasting live from the cove, blogging and disseminating information for the world to see. Your support has never been more crucial and is greatly appreciated.

Curious about Dolphin Project’s Cove Monitor Program? – Click here to learn more about our program, and submit your application.

Watch a clip from #JDD2017 London, where Ric O’Barry and other activists lent their voices for dolphins: