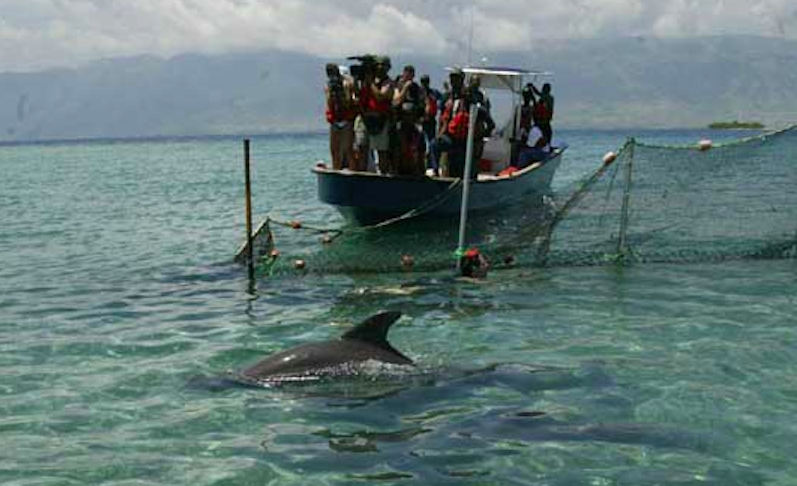 Following a request by Ric, Wainwright and Mathieu intervened for the dolphins after a Haitian firm with Spanish backing, captured the animals for display. With a U.S. Coast Guard patrol boat maintaining security, Ric and Guillermo Lopez, DVM, of the Dominican Republic Academy of the Sciences dismantled the sea pen holding the dolphins captive. As he worked, his wife — Helene O’Barry, along with Jane Regan of the Associated Press, snapped digital photos from the beach.

Ric flew to Haiti after learning on May 18 that eight bottlenose dolphins had been impounded in a shallow sea pen in the Arcadins Islands. He reached the scene on May 23. Action Haiti — headed by Jose Roy, had applied for a permit to capture 10 dolphins on December 22, 2003. The permit was approved illegally February 2, 2004, even though Haitian law required a prior population study. Ric said:

Roy revealed that a large Spanish corporation was financing the entire operation. He said that several dolphin trainers from Mexico had been brought in to capture and train the dolphins. He would not give any names. Nor would he disclose which Mexican company had provided the staff to carry out the captures.

Unfortunately, by the time Ric arrived, two dolphins had already died, but he successfully released the remaining six. He noted that most had “rake marks” and “stretcher burns” from being roughly handled, but none needed pre-release measures.

The liberation of the dolphins also marked successes in other areas. Haiti rejected the act of dolphin capturing as a commercial enterprise and demonstrated the resolve of the new Haitian government to start enforcing conservation laws.