Video Highlights from Sept 1st at the Cove

Home/Blog/Japan/Video Highlights from Sept 1st at the Cove 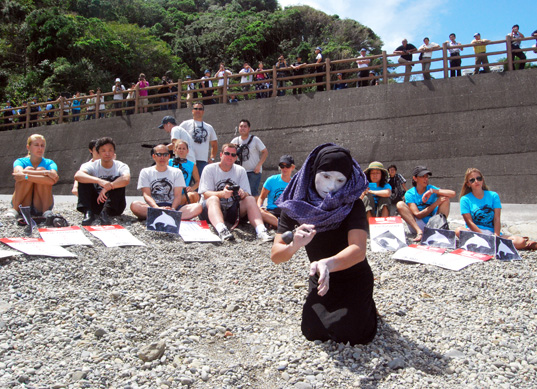 Our volunteer videographer, Melissa Thompson Esaia, put together this series of video clips of our 34 volunteers from five continents on the beach in Taiji on Sept. 1st, the first official day of the dolphin hunt season.  No dolphins in the Cove, but plenty of extreme nationalists shouting insults at our group, as you can hear from the soundtrack.
You’ll see:

• Our group in a circle for a moment of silence for the souls of the dolphins and whales that have died in the Cove and that are expected to die this season;

• A bit of Russ Ligtas’ amazing Butoh dance he performed, starting in the waters of the Cove – a dance of grief for the dolphins; and

• Our singer/songwriter Arielle performing one of her songs she wrote especially for this event.
What you won’t see is me, as I was stuck in court all week and only arrived in Taiji on Sunday, Sept. 2nd.

My deepest thanks to Melissa, Russ, Arielle, and all of our participants who paid their own way to come to Taiji to remind the world of what goes on in the Cove.

For updates from our Cove Monitors in Taiji, #Tweet4dolphins.