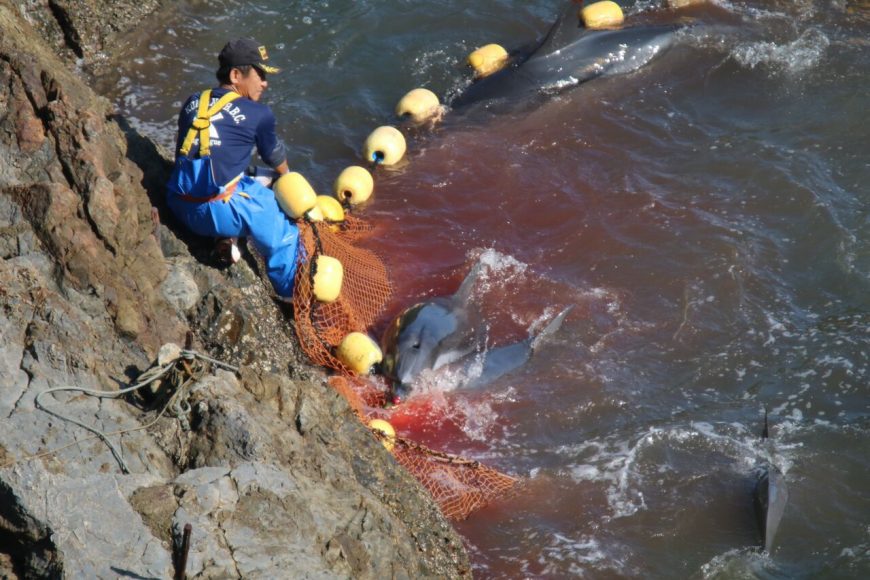 October 26, 2016, Taiji, Japan: Exactly one week since the first slaughter of striped dolphins took place in the cove, Dolphin Project Cove Monitors live streamed via Facebook to thousands of viewers across the world what could only be described as unbearable acts of cruelty against another pod of the same species.

The day began with a transfer of two bottlenose dolphins from the harbor pens to the Taiji Whale Museum – dolphins which were wild caught for the sole purposes of entertaining a paying public. Then, at 8:00 a.m., two hours after the hunting boats went out in search for dolphins, they began pursuing a pod.

The dolphins fought hard, but hunters were relentless. At one point, the large pod appeared to break free, with a smaller number of an estimated 40 dolphins ultimately being rounded up and herded into shallower waters. When we spotted the characteristic pattern of blue/grey and dramatic white stripes, we feared it would be a brutal event. And it was.

Striped dolphins swim closely together after being herded into the cove
Credit: DolphinProject.com

Striped dolphins are usually found in tight, cohesive groups averaging between 25 and 100 individuals, but have been occasionally seen in larger groups of up to several hundred and even thousands of animals. Within these schools there is a complex system of individuals that may be organized by age, sex, and breeding status.”*
*Source: NOAA Fisheries, Office of Protected Resources

While overgrown greenery serves to largely block the visuals in the cove, they cannot mask the sounds. And they were gruesome as the dolphins panicked, desperately attempting to evade the sensory overload bombarding them. Yet even the foliage couldn’t mask the hysteria which ensued, as dolphins slammed against the razor-sharp rocks, became entangled in the nets and ultimately died a traumatic death even before being dragged under tarps to be slaughtered.

Striped dolphins panic and bleed out in the cove
Credit: DolphinProject.com

Several well-documented studies describe the complexity of dolphin self-awareness, as well as their external awareness. Thus, while this may have very well been the first time the mammals encountered humans, they would have immediately tuned into the danger they were facing.

The Taiji Fisherman’s Association attempts to justify the slaughter as a practice rooted in culture and tradition, but we disagree. The large-scale hunting of dolphin began a mere 50 years ago, and even then, most would question where torture and cruelty can be condoned as a cultural practice. Their claims of the drive fisheries being humanely executed are fictional accounts designed to quiet a growing number of voices opposing the annual kills.

As I understand it, there were some small scale drives in 1933 but they didn’t get into full swing until 1969.” ~ Ric O’Barry, Founder/Director of Dolphin Project

While our Cove Monitors continued to document the drive as it unfolded, sounds of excruciatingly-loud tail slapping could be heard as the life of each dolphin was extinguished, their fight valiant, but hopeless against the hunters. And while the waters of the cove turned a bright blood red, the surviving pod members would have been acutely aware of the extinction-level event they were now facing.

Live striped dolphins roped by their tails as they struggle in bloody water
Credit: DolphinProject.com

Hunters could be seen wrangling the terrorized dolphins, tying them in bunches by their tails, while alive, drowning them as they made their way to the shore. Others were clearly seen being run over by the skiffs’ and their whirling propeller blades, a practice we have documented several times during past slaughters, indicating this wasn’t an isolated incident.

When all sounds ceased, the slaughter finally ended, suddenly a lone head popped out amidst the bloody water. One dolphin still survived. What followed was a full hour of torture as hunters in skiffs chased the injured mammal within the small, netted area. Finally, the dolphin succumbed in exhaustion as hunters looped a rope around its tail and dragged it under the killing tarps. But not before they covered the dying animal itself with a plastic sheet, to hide their actions.

The last remaining dolphin is dragged by its tail – alive – to its death
Credit: DolphinProject.com

This isn’t culture. This is shame. It is a disgrace to the Japanese culture and needs to end – immediately.

The level of cruelty that was inflicted on the striped dolphins was breathtakingly brutal and barbaric. Any slaughterhouse in the world would be shut down if they caused as much pain and suffering as the dolphin hunters of Taiji routinely do. These guys should be arrested.” ~ Ric O’Barry