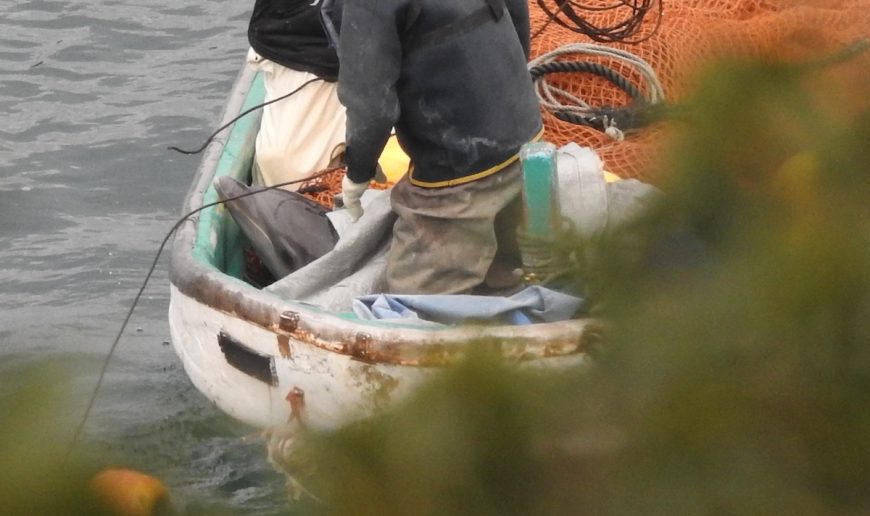 Taiji, Japan, 1-11-19 – On January 8, local time, Taiji’s dolphins hunters would hit a massive payday. The day began as any other, with hunters heading out to open water in search of migrating dolphin pods. Our team of Dolphin Project Cove Monitors documented as a drive hunt began. From the amount of splash, it was evident the pod being pursued was sizable, and shortly thereafter the team identified the species as bottlenose.

By the time the pod was driven into the Cove, our team estimated numbers to be as high as 120 individuals, possibly even higher. Young calves were spotted amongst the adults, many of whom were spyhopping, tail slapping and breathing rapidly. For the hunters, the day was done, and the mammals were left overnight.

On day two, the captive selection process began. Amidst the chaos, a young calf, presumably separated from its mother, began ramming a net. Over and over its tiny rostrum made contact with the barrier. While the dolphin remained unnoticed by divers and trainers, our team noticed and began documenting the tragedy as it unfolded. Several moments later, the net stilled, and the dolphin disappeared below the surface of the water. *See video below. 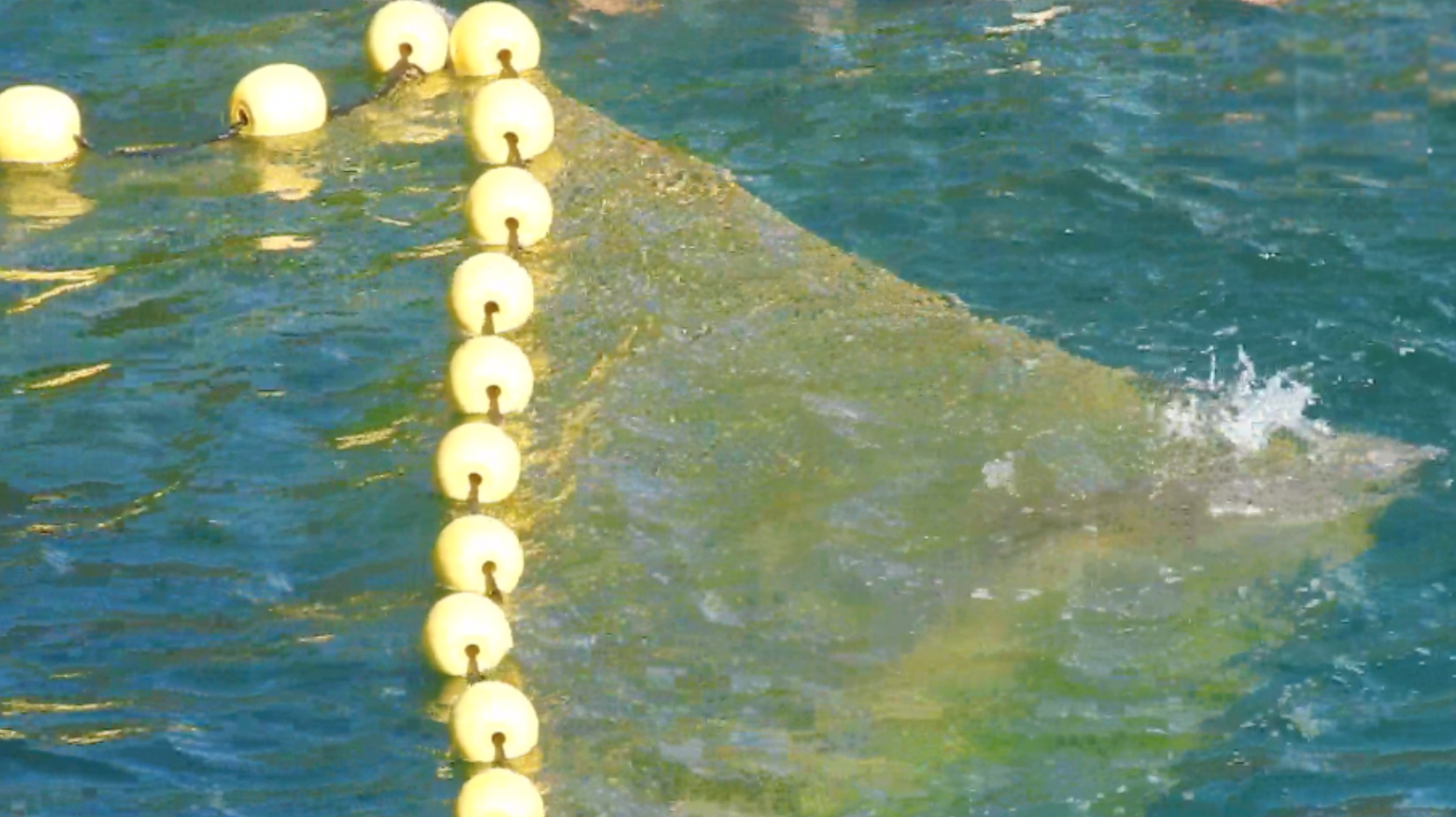 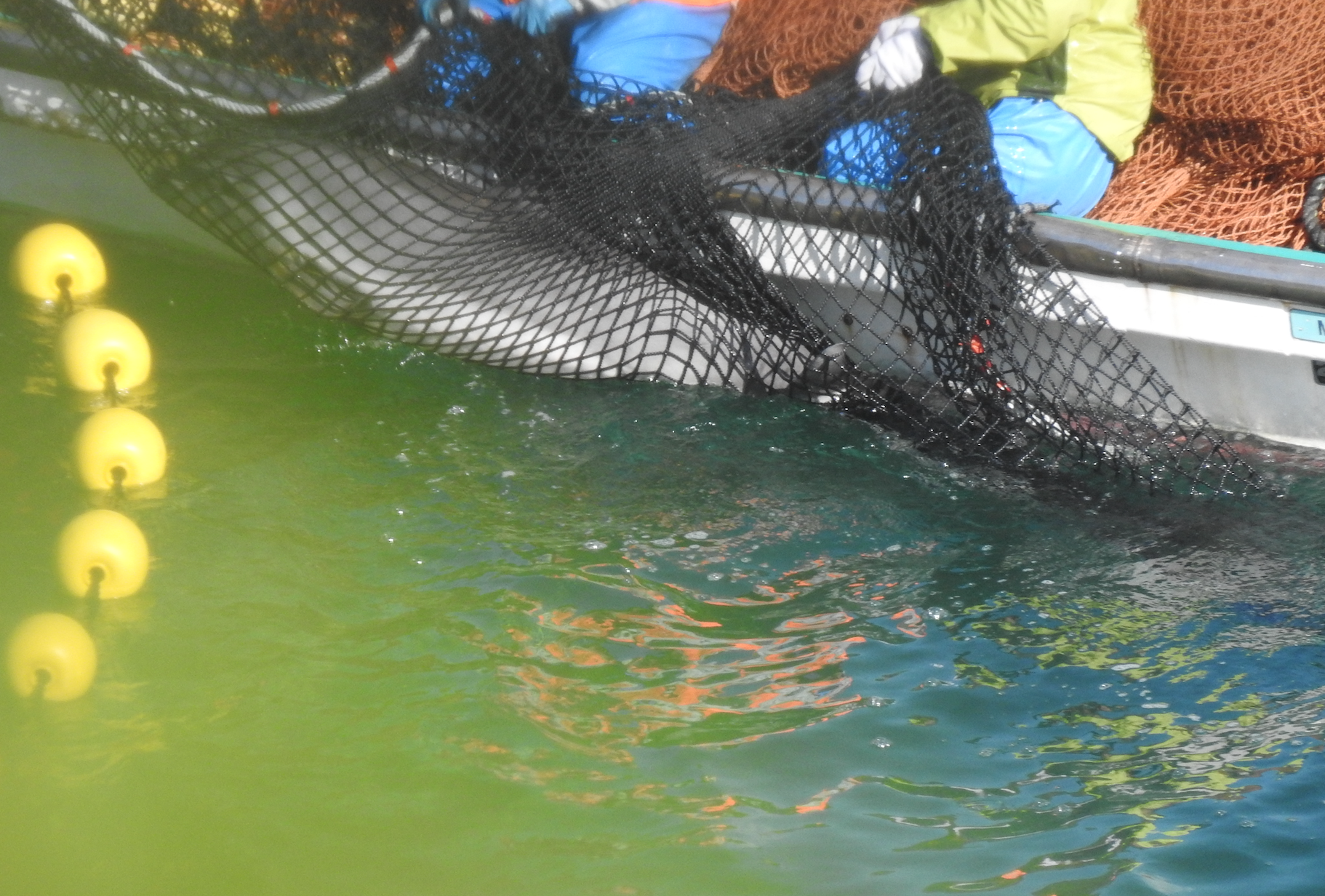 By day three, the dolphins, whom had now been trapped in the Cove for almost 48 hours were visibly struggling from injuries, exhaustion and stress. Our team spotted a diver hoisting up a young, dead dolphin by its flukes into a skiff. The tiny body, a female, was quickly covered by a tarp – another casualty of the horrific capture process. 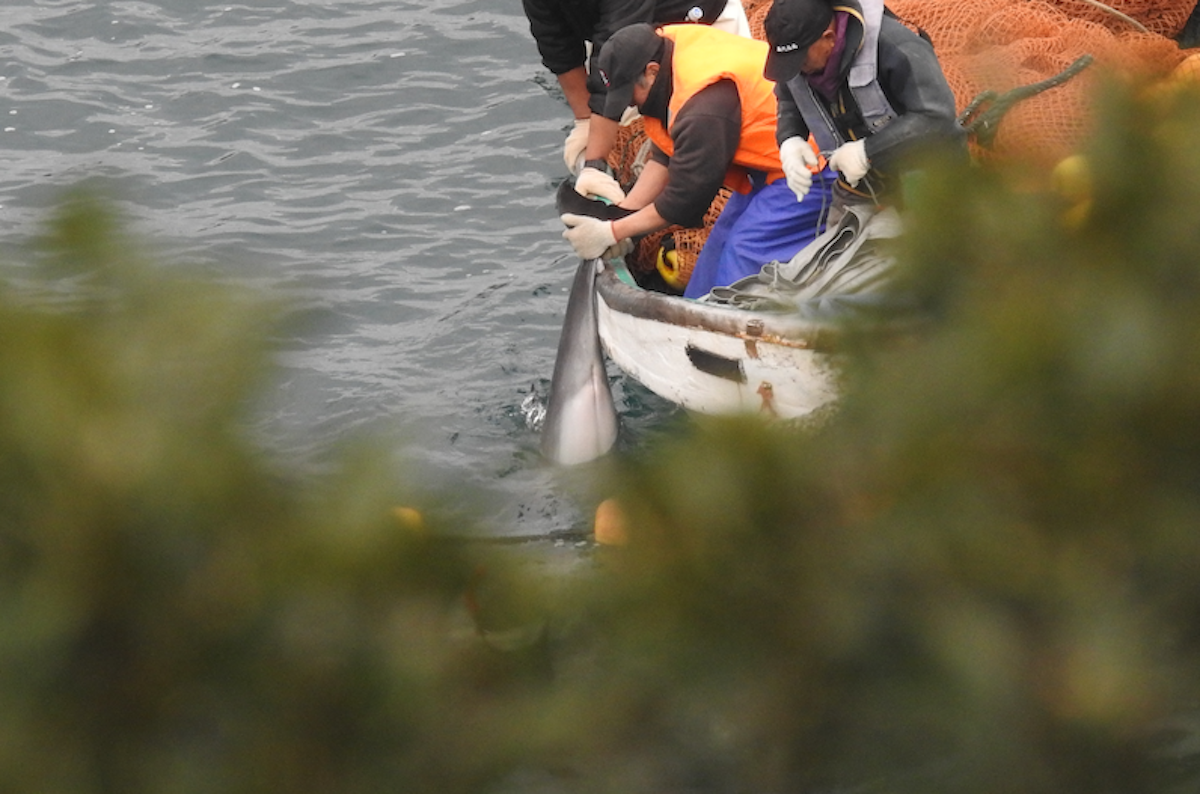 A young, dead dolphin is hoisted into a skiff, the Cove, Taiji, Japan. Credit: DolphinProject.com 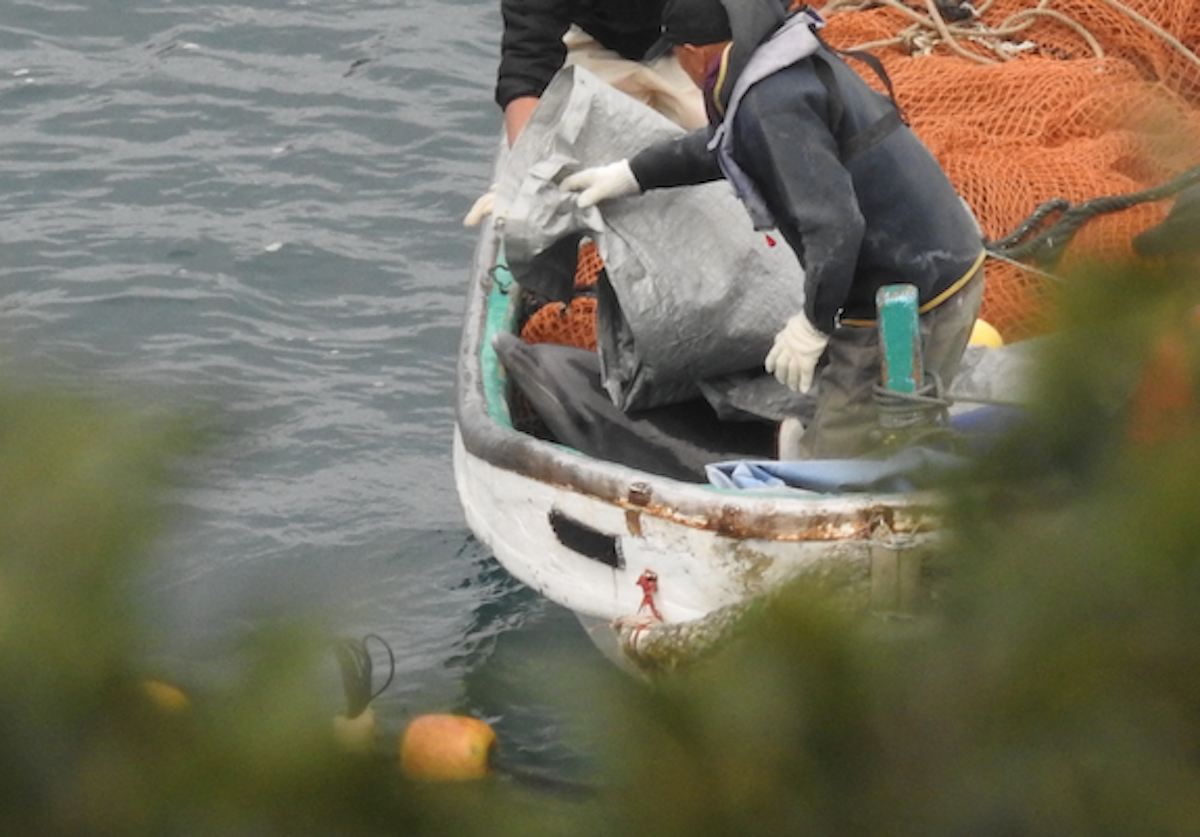 The captivity industry – in which bottlenose dolphins are the most popular – is the primary reason Taiji’s hunts exist. While demand has waned in Europe and the United States, interest has increased in China, Japan, Russia and the Middle East. Dolphins caught from the wild are caged, and acclimated to a rewards system, where dolphins “perform” learned tricks and behaviors in exchange for food rewards. Some will remain in Japan while others will be sold, then shipped to various aquariums and marine parks across the world. This process can occur several times over the course of a dolphin’s life.

Taiji maintains these hunts are ethical, sustainable even. They claim their killing methods are swift. Local government has expressed a strong interest in captive breeding, theoretically, reducing the amount of dolphins captured from the wild. The captivity industry would have you believe dolphins welcome the opportunity to be ambassadors for their species. And if it weren’t for our cameras and our team live-streaming, these claims might even be believable.

“The level of extreme cruelty taking place in Taiji is only exceeded by the level of apathy from a billion dollar dolphin captivity industry that refuses to police their colleagues.” ~ Ric O’Barry, Founder/Director of Dolphin Project

At the time of this writing, the pod of dolphins will be entering their fourth day of confinement. They have been trapped in the Cove, with no access to food (or water). They have been subjected to continuous and sustained harassment, chasing, inspection and groping. We have documented many injuries. They are exhausted, and they are suffering. Fifty-three (53) dolphins have been removed and taken to nearby pens, selected for “life” in captivity. The process will begin again in a few hours, when once again, our team will live stream and accurately document the brutality dolphins endure, all for the purposes of entertainment.

We ask that every person reading this blog click on the Take Action link and express your outrage at Taiji’s brutal treatment of dolphins. Behind the mask of the dolphin’s perpetual smile lies continuous anguish. Their voices are silenced, ours cannot be.