The Truth Behind Mexico’s Swim-with-Dolphins Industry 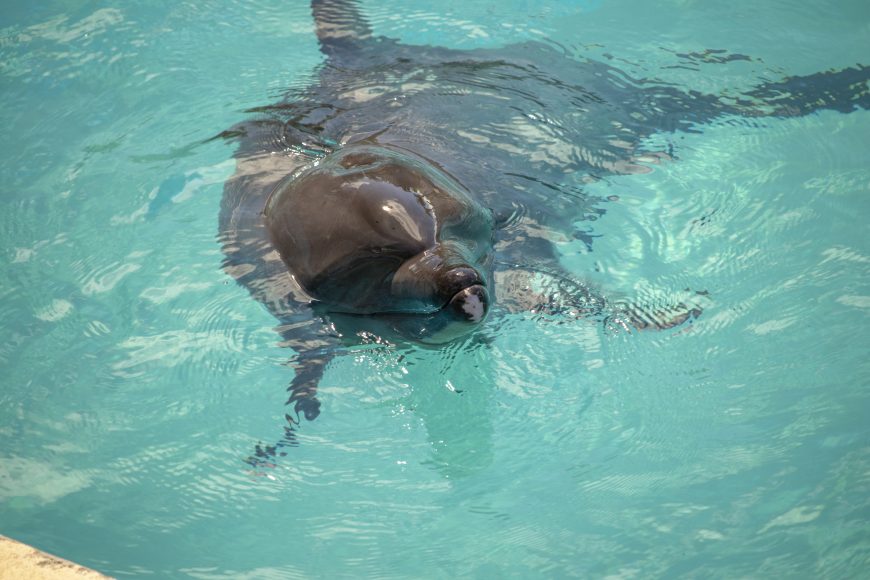 At one point or another, we have all probably seen a friend or family member post a photo online of their captive dolphin experience while on vacation. The captive dolphin tourism industry is an incredibly profitable one that has always placed a monetary value on the lives of the animals in their care. They have used the myth of the “dolphin’s smile” to lure in families and vacationers, but it is time to expose the truth. The dolphins in Mexico have gone without a voice for too long.

In this blog we are going to tell you about the well known company called Dolphinaris and what our volunteers found when they visited their facilities. 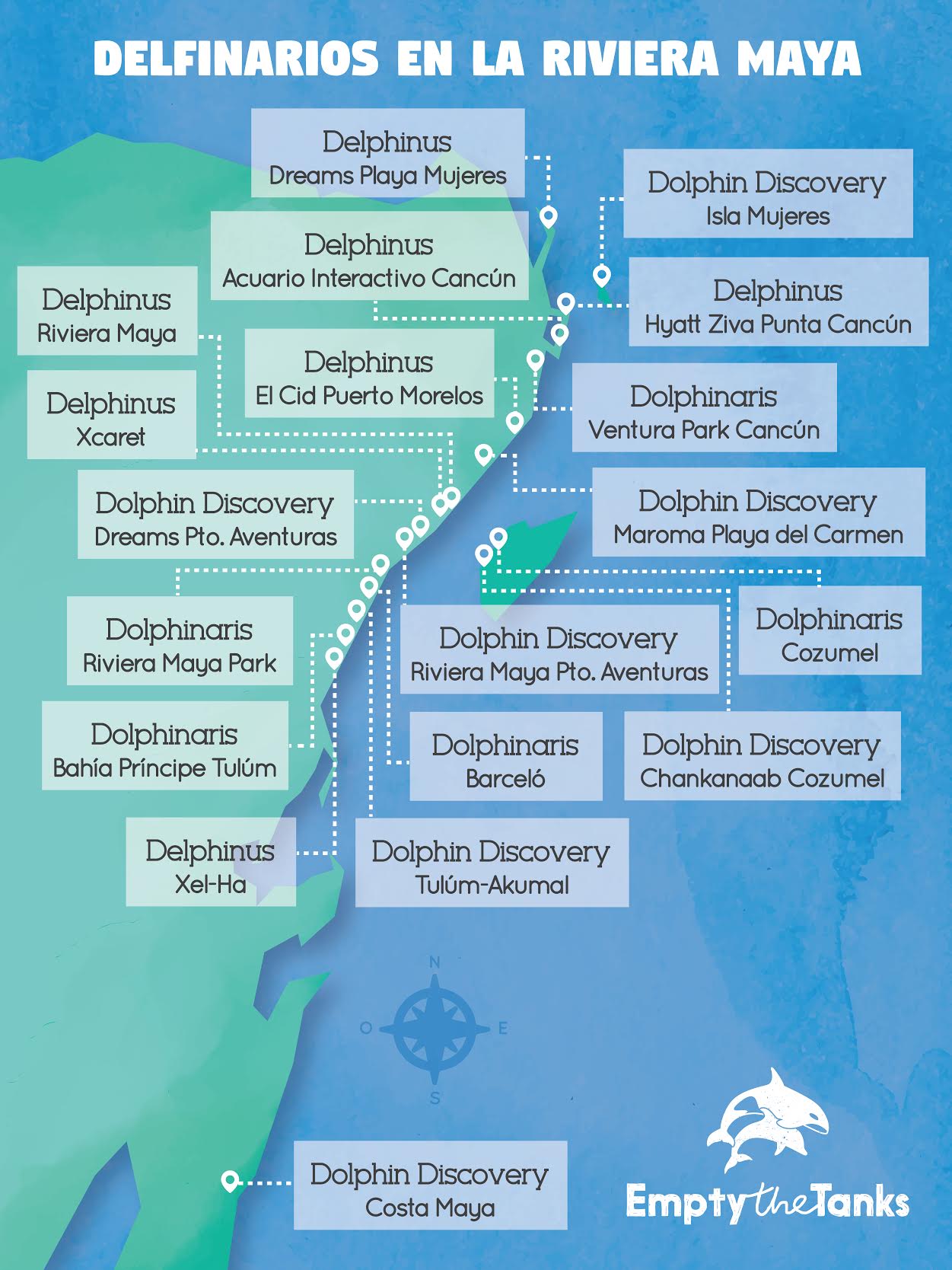 There are 19 dolphin captivity facilities in the state of Quintana Roo, Mexico. Credit: Empty the Tanks

There are three dolphin swim-with companies operating in Quintana Roo – Dolphinaris, Delphinus, and Dolphin Discovery. These three companies run the 19 captive facilities in the state.

Dolphinaris operates five swim-with dolphins operations in Quintana Roo. Their company is also responsible for the now closed facility in Arizona, which resulted in the death of four dolphins in the two years it was open. Our volunteers found the Dolphinaris tanks the smallest and worst out of all 19 that they visited. The tanks at the Dolphinaris locations are comparable to a typical swimming pool. They are barren, filled with harsh chemicals and there were no “toys” or enrichment objects in sight. The lack of shade shocked our team as well.

“The staff have chairs and umbrellas to protect them from the intense sun and heat, but the dolphins had little to no to shade for their tanks.” 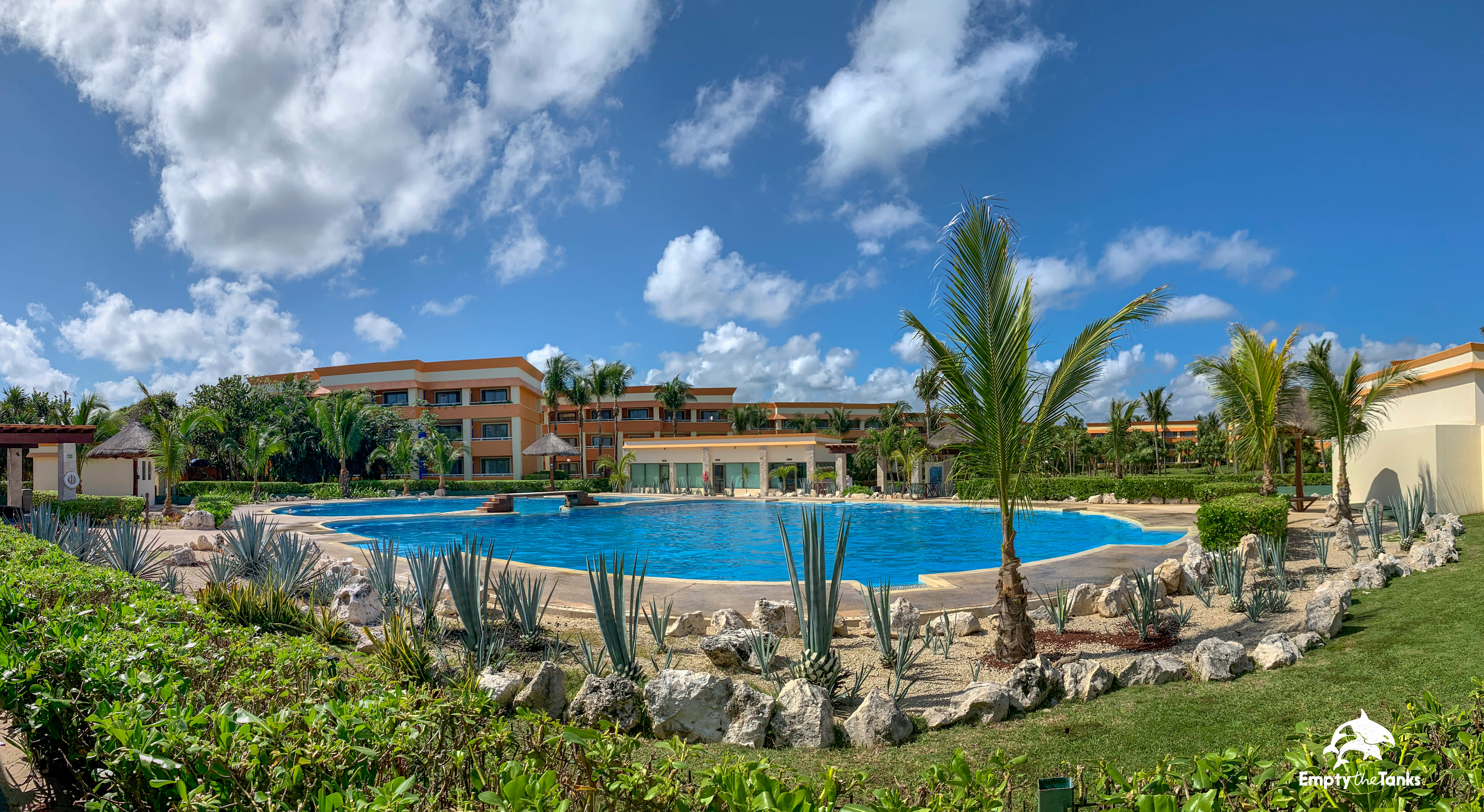 The Dolphinaris tanks provide no shade or enrichment for the dolphins. Credit: Empty the Tanks/Dolphin Project

They reported that several dolphins at Dolphinaris inside the Grand Bahia Principe Resort seemed to never open their eyes. Anonymous staff members have stated that the dolphins suffer from eye damage from the sun and chemicals they are exposed to.

During their visit to Dolphinaris’s Cancun location our volunteers watched two dolphins floating at the surface, facing one another with bars between them for 30 minutes. Dolphins at multiple locations were observed just floating at the surface of the water until they would drop to the bottom of the tank where they would lie for a few minutes before floating back up to the surface. Their report also described a single dolphin at the Cancun location being repeatedly chased and harassed by tank mates with no place to escape to. 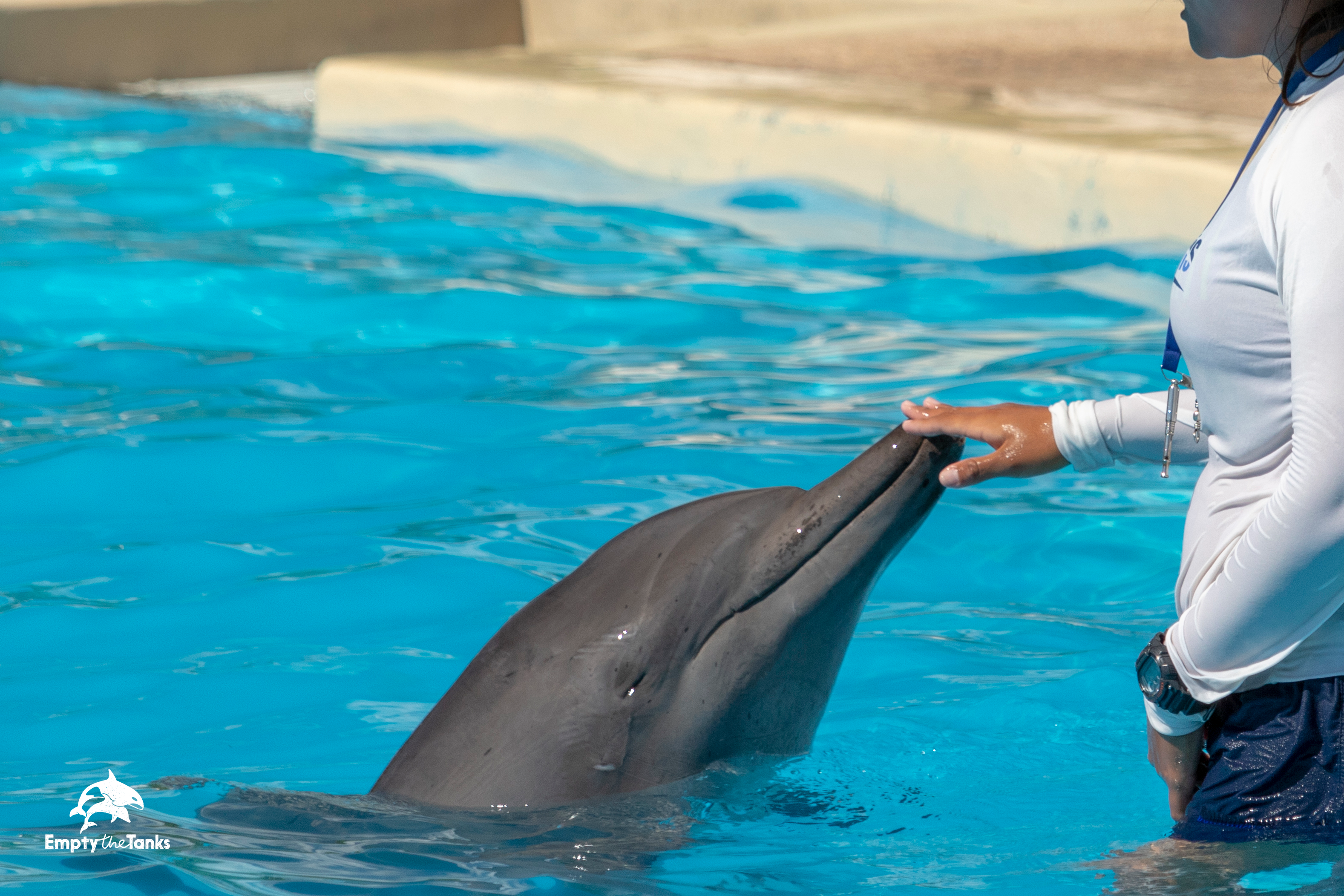 Dolphins at the Bahia Princeipe Bahia resort were reported to never open their eyes when our volunteers were there documenting. Credit: Empty the Tanks/Dolphin Project 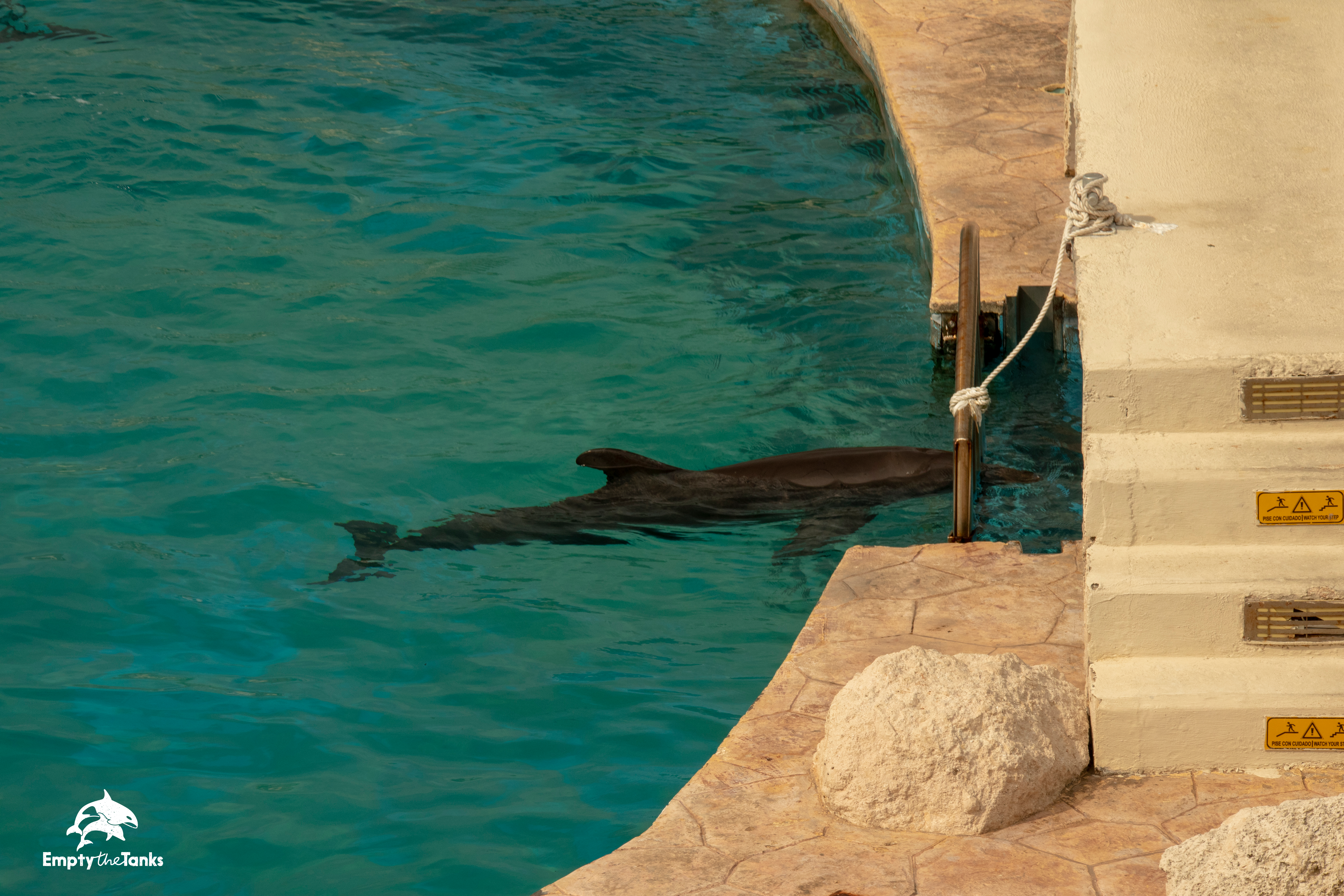 Dolphins at the Dolphinaris Cancun location were observed floating at the surface for long periods while facing each other through a closed gate. Credit: Empty the Tanks/Dolphin Project

They also documented dolphins with badly discolored and scarred rostrums. A dolphin at Grand Bahia Principe Resort location also had a wound on his or her dorsal fin. The dolphin was also covered in noticeable rake marks from tank mates. 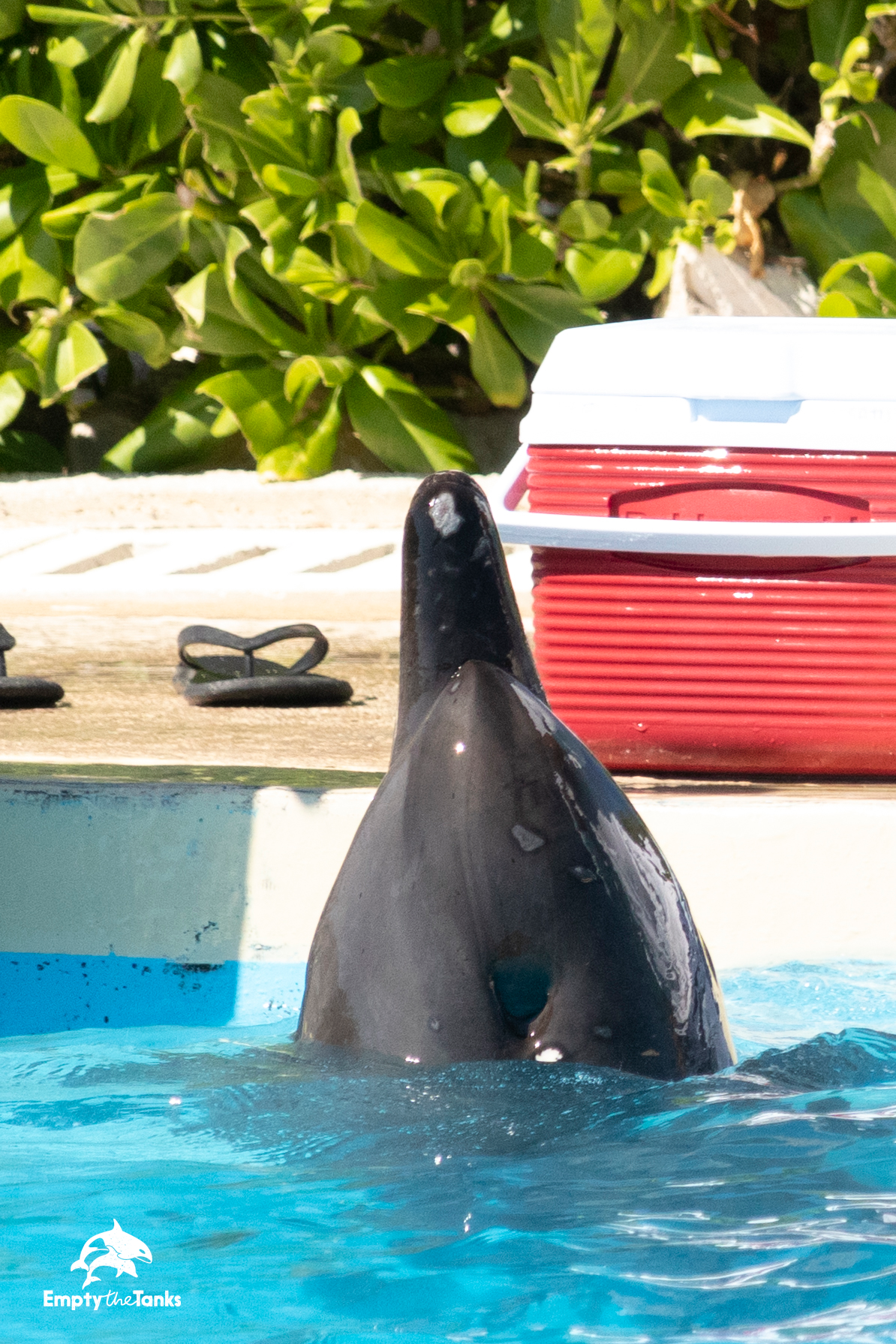 Damaged rostrums were also a common sight at all five of the Dolphinaris locations. Credit: Empty the Tanks/Dolphin Project 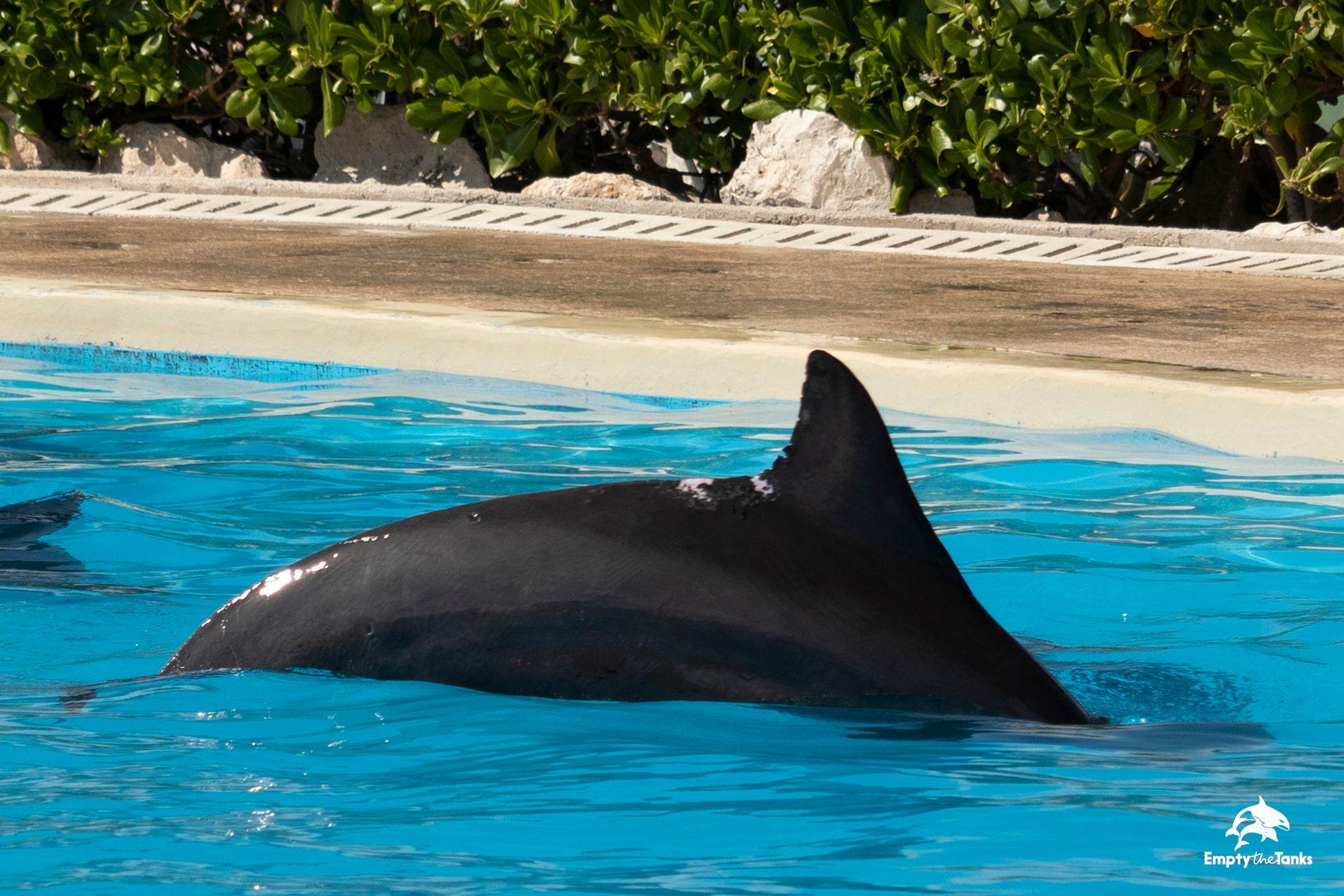 This dolphin was seen at the Dolphinaris inside the Grand Bahia Principe Resort with a wound on his or her back. Credit: Empty the Tanks/Dolphin Project 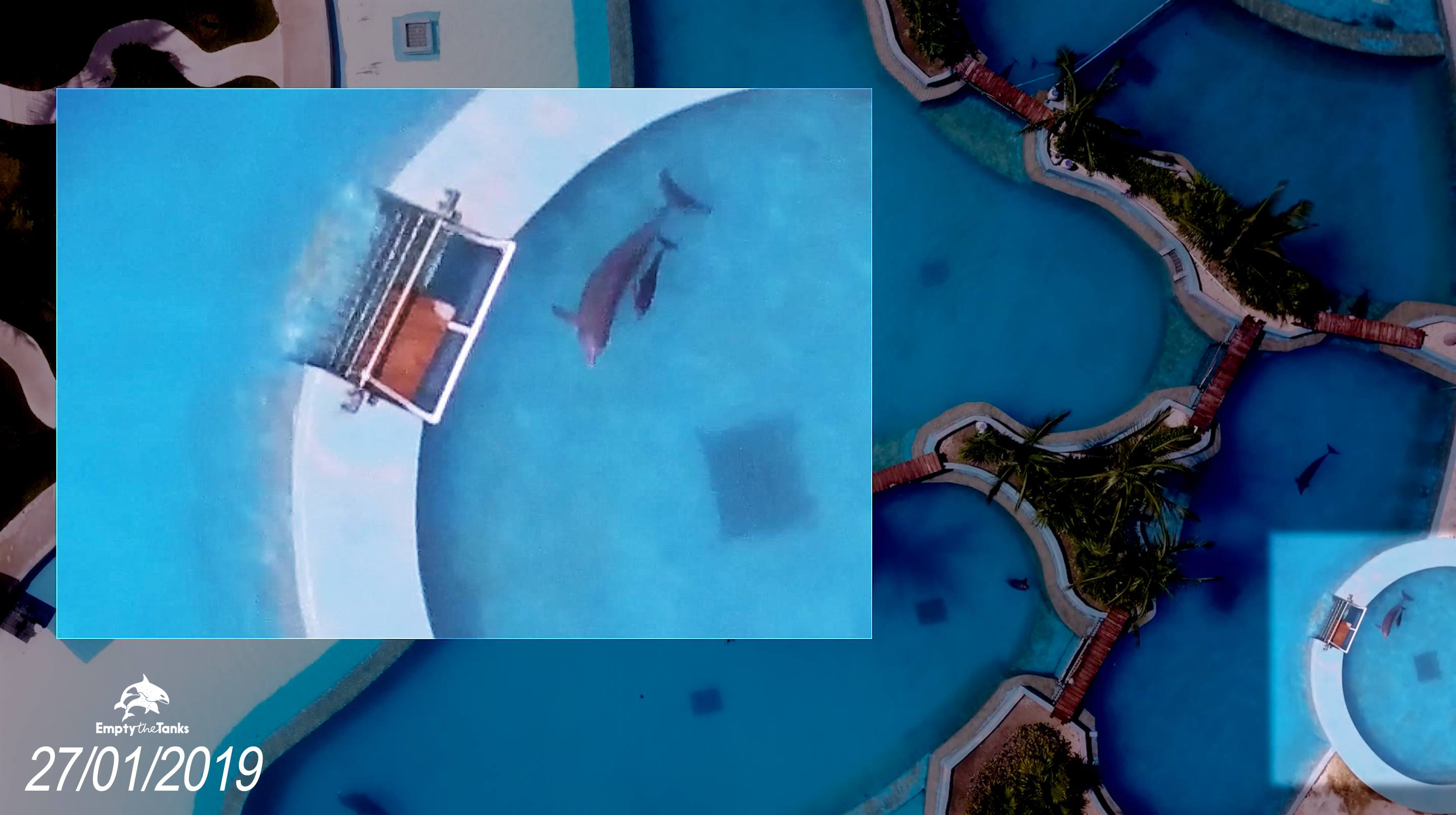 Anonymous sources confirmed to both Empty the Tanks and our friends at Dolphin Freedom Mexico, that the young dolphin we were sent video of did die only a few days after birth. We learned from one of our sources in Mexico that captive facilities do not officially acknowledge or report the birth of dolphin calves until they are at least six months of age. We can only begin to guess how many young dolphins have died in the tanks in Mexico. 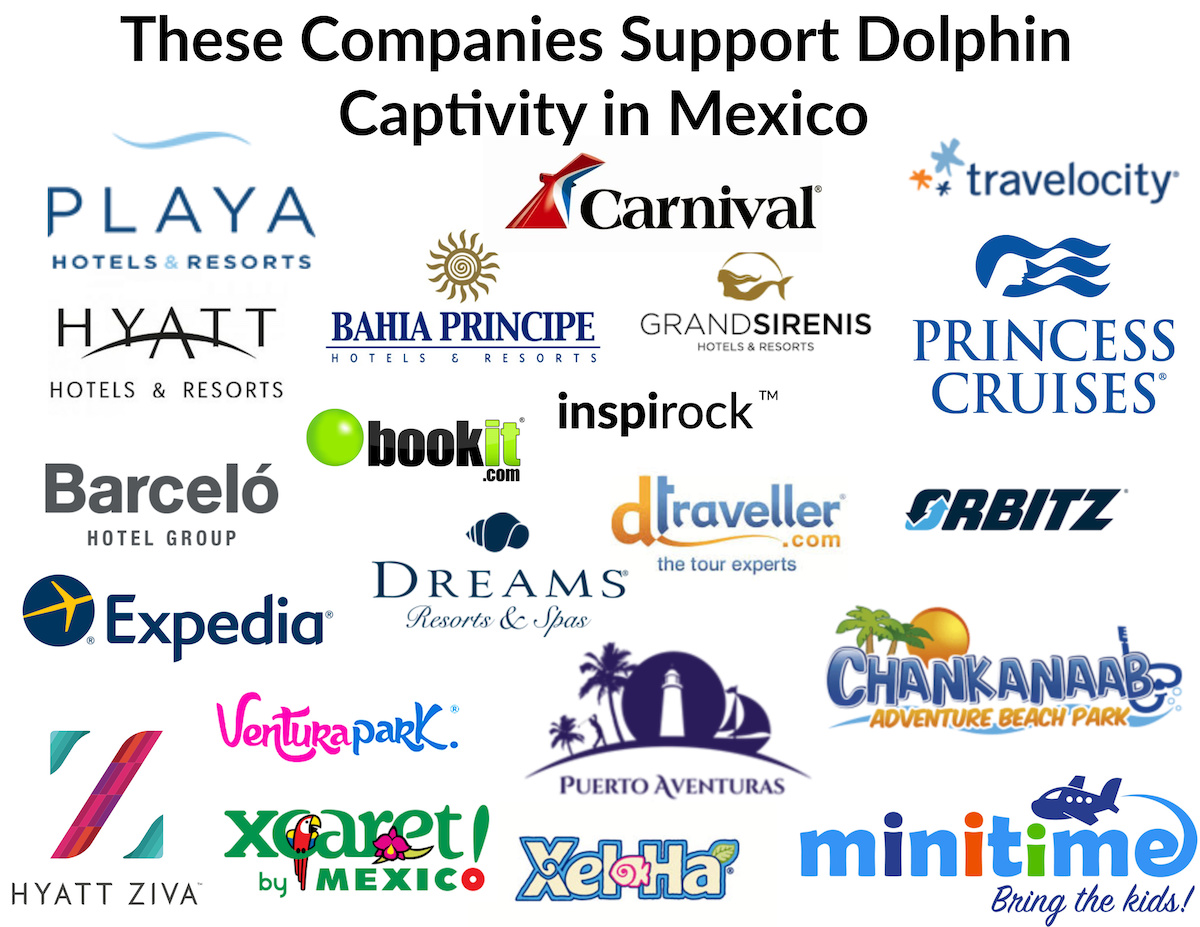 In our next blog we will continue this expose of the dolphin captivity industry in Mexico and tell you what our volunteers discovered while visiting the seven facilities belonging to Dolphin Discovery.

Featured image: A dolphin floats on the surface of the tank at the Dolphinaris Cancun location. Credit: Empty the Tanks/Dolphin Project