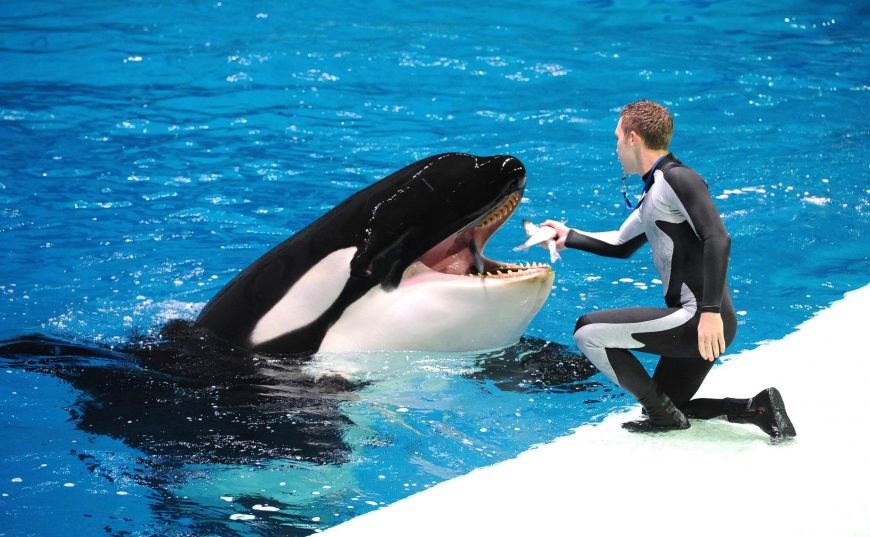 Touted as the “largest oceanarium in Europe,” the new Russian aquarium opened on August 5, after almost three years of delays. But behind the curtain and even in front of the limelight, there are concerning signs that the wild-caught orcas at Moscow’s heavily advertised “Mosquarium,” are beginning to act out their frustrations after being contained in barren tanks and dealing with noisy performances.

Warmly approved by Russian President Vladimir Putin, there has been a steady, never-ending steam of visitors, some waiting up to an hour and a half outside the Moscow facility. The oceanarium holds a plethora of fish, rays, sharks and seals.

The orcas share the lavish indoor stadium — reminiscent of a H.R. Giger-esque mausoleum, with two belugas, two walruses, and on top of it, eight Pacific bottlenose dolphins. How they manage to keep four species in the same tank system, when only three out of the four live in the same climate, is perplexing at best.

Each species have their own interwoven segments during the 30-40 minute show, with blaring techno music, a mashup of several blockbuster film scores, and Russian folk music. A truncated “best-of” version of the show by Комсомольская Правда, can be watched below:

Not surprisingly, almost all of the stadium residents are sourced from the wild: the belugas were sent from TINRO, the Pacific Scientific Research Fisheries Center, which regularly catches them from the Sea of Okhostk and Sakhalin-Amur areas. The two young walruses were most likely sourced from Sochi Dolphinarium, which may have caught them in eastern Siberia; the dolphins are reportedly sourced from the Taiji dolphin drives, and the three orcas, were captured in the waters of Kamchatka, in far eastern Russia. 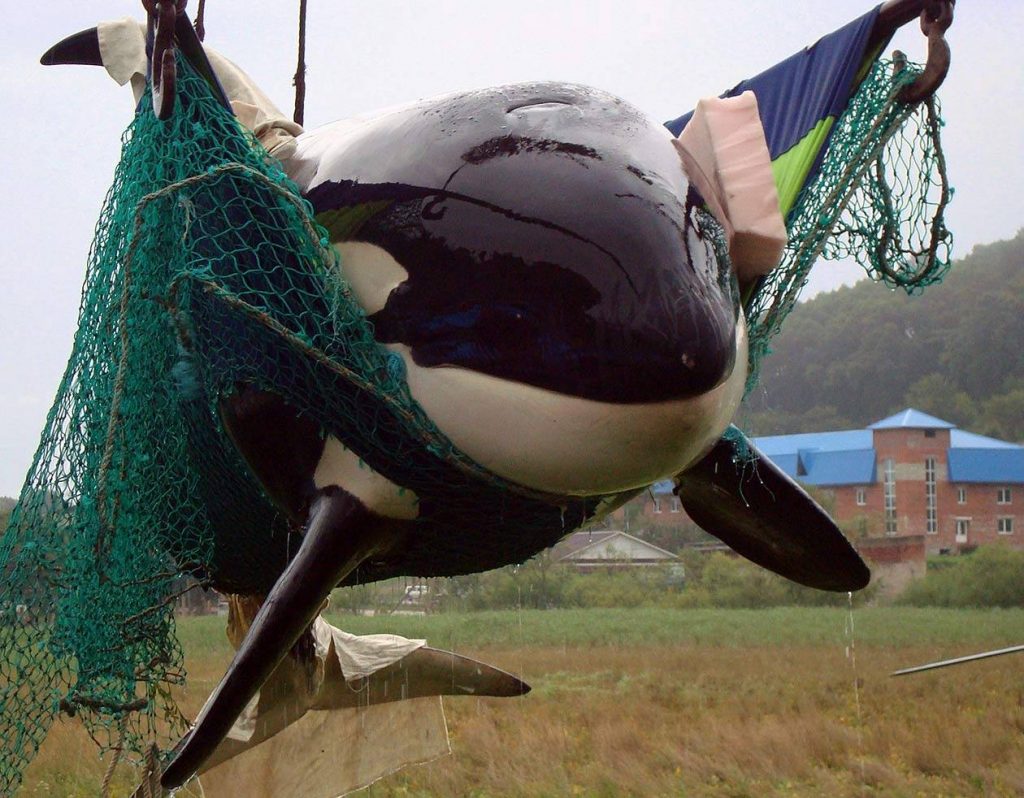 Narnia was captured first near Reineke Island in the Sea of Okhostk in August 2012. She was followed by Nord, snapped up off the Sakhalin Island coast in 2013, and then came Juliet, presumably caught around summer of 2014 in the Sea of Okhostk. With the exception of the bottlenose, all were collected by the Russian marine park construction and animal capture conglomerate White Sphere/White Whale.

Despite knowing where these orcas were captured, Mosquarium officials have told the press that their orcas were ‘rescued’ by poachers.  It’s a lame cover up often used as an excuse by aquaria — particularly when according to the Russian media, the current price of an orca captured in local waters can fetch a reported $15 million.

They may try to sugarcoat their spin as to where the animals are from and how they are doing — highly reminiscent of SeaWorld’s playbook, but with every tick of the turnstile, a visitor’s mobile phone is recording a few moments of a less than savory truth.

Throughout September, Instagram has featured heavily into getting an inkling on the orcas’ well-being. Videos have been appearing online illustrating episodes of aggression towards each other and even the beginnings of stereotypical behavior. Narnia and Juliet are taking swipes at Nord, resurrecting an eerily similar scenario with Tilikum when he started out at Sealand of the Pacific, and all three have learned to entertain themselves by blowing bubbles and have even begun picking at the bottom of the Underwater Viewing tank. Some photos even indicate a rosy rash along Narnia’s throat.

To compound matters, the very tanks the orcas are kept in were not planned thoroughly enough as construction was delayed several times. Somewhat sketchily, the construction crew was only given official permission to start building on July 8th, 2015. Additional permission from the building commission was granted on July 17th, 2015. Because of rushed construction, the slide-out platform is disturbingly small compared to Narnia’s size. If she’s this large right now at around 8 or 9 years old, just imagine how she’ll barely be able to slide onto the platform at all in the next six years (if she manages to live for that long).

Orca trainers also appear to have ignored the attacks and incidents that have taken place at SeaWorld parks over the past forty years, even though rumors implied that SeaWorld was consulting with Russian trainers on their “experienced methods.”  Images of the Mosquarium trainers show them distressingly close to the orcas’ heads and jaws.

While one trainer has attempted to swim with Juliet, it is clear they have not desensed the other two to their presence in the water: in a vlog uploaded by DragoPlay on September 12th, a trainer slips off the main stage and into the water during a performance, accidentally landing on an orca’s head. While he was able to scramble out, the other two orcas’ agitated reactions require no further elaboration.

Whether the trainers can learn fast enough to prevent a tragedy before Mosquarium’s first anniversary, has yet to be seen. It will take a steep learning curve for staff, and even the Russian public, to consider whether keeping nature’s top marine apex predator contained in a blue box was a good marketing idea. In the meantime, while they try to figure that out, visitors’ mobile devices will continue to film and snap away.

Thanks to two anonymous sources for providing translations and additional information, and gathering the Instagram videos, respectively. Additional thanks for liberate_cetaceans on Instagram for sharing the original vlog. 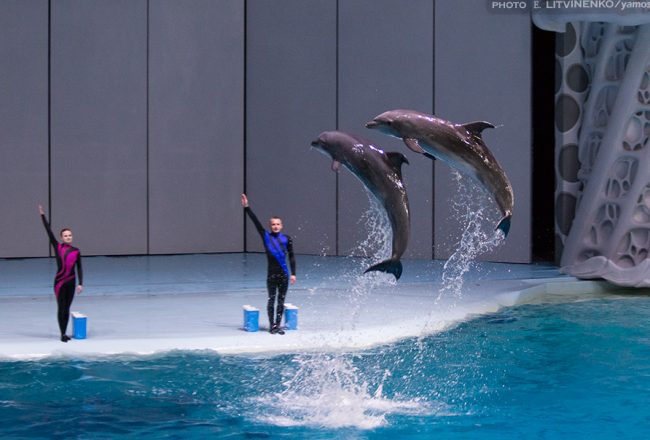 Dolphins are one of the most amazing creatures on the planet. They impress with their intelligence, social bonds and culture. Almost...
read more 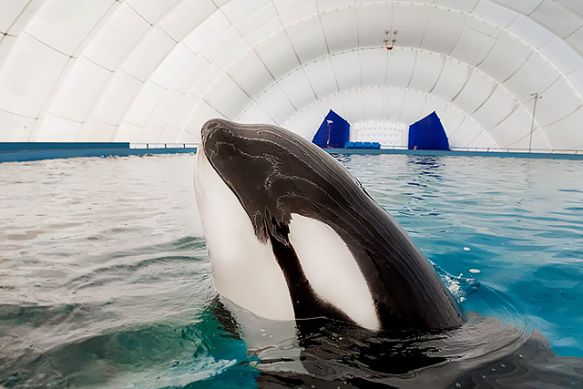