Tremendous Efforts Made for Dolphins in South Korea 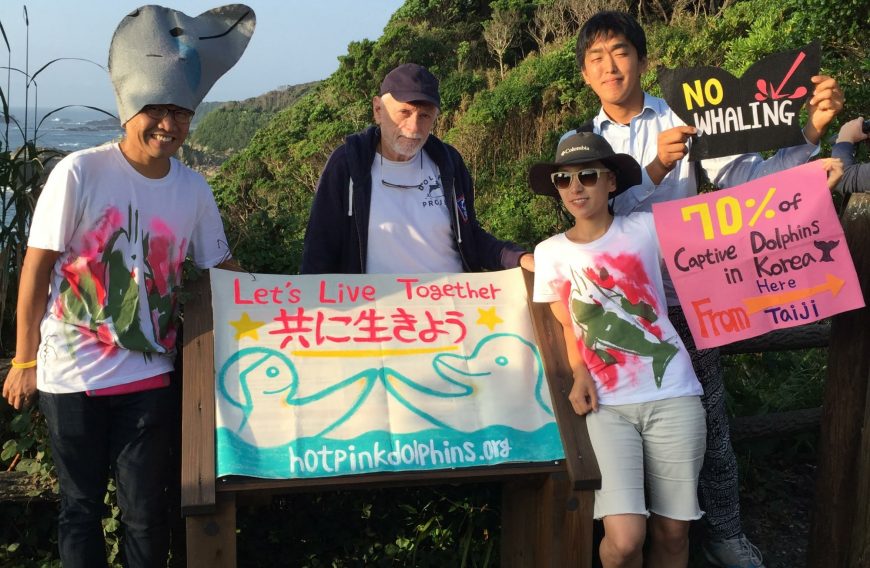 The Dolphin Project is delighted to acknowledge the efforts of our South Korean friends and colleagues for their recent success in blocking the import of dolphins from Taiji, Japan to a dolphinarium in Ulsan City.

The former campaign manager for Korean Animal Welfare Association — Hyung Ju Lee, told Dolphin Project that in June 2015, a calf died at Jangsaengpo Whale Museum in Ulsan. Just two months later, a male dolphin died due to an infection from a wound sustained in a fight with another dolphin.

Hyung explained that even though the aquarium is affiliated with the Government of Ulsan City — which means they run it with taxpayers’ money, it hid both dolphin deaths from the public until January 2016.

At a press conference, a representative announced the aquarium’s intent to seek two replacement dolphins from Japan.

There was a public outcry against the import. Hot Pink Dolphins began a campaign to stop Ulsan’s dolphin import plan. From press conferences to rallies and boycott campaigns, a lawsuit was filed against Ulsan Dolphinarium to hold the city accountable for the deaths of the two dolphins. As a result, the import was tentatively postponed. Hyung added:

On Jan. 26, 2016, MP Hana Jang questioned South Korea’s Ministry of Environment about its stance on the Ulsan Aquarium’s request for importation of dolphins from Taiji. ME stated in a written letter that the application had not been filed, and that “the Ministry will advise to avoid importation of dolphins from Taiji by seeking cooperation from Korean Association of Zoos and Aquariums (KAZA) in the future.”

In February, Dolphin Project director Ric O’Barry was featured in a documentary by Ulsan MBC in order to raise awareness among the local people in Ulsan City. The Ministry of Environment and the Ministry of Oceans and Fisheries declined Ulsan Aquarium’s import request.

“Since opening in 2009”, Hyung said, “the Ulsan Aquarium had been importing dolphins from Taiji constantly.”

This is in stark contrast to the story of Sampal, one of five bottlenose dolphins rehabilitated for release near the South Korean island of Jeju. On April 18, a team from the Dolphin Research Group of Jeju University/Ewha Womans University confirmed that Sampal had given birth after successfully reintegrating herself into the wild.

Hyung explained what while the Ministry’s statement was not an official announcement of a plan to implement a ban, “it is definitely an achievement,” she added. “Ulsan is like Taiji, the city is famous for its love for whale meat and also for illegal whaling.”

The import denial sent a strong message to South Korean aquariums and to Taiji, Japan and it was welcomed by Hot Pink Dolphins.

With the Ministry of Oceans And Fisheries tightening regulations for future Taiji imports, “the screening process … will make dolphin imports from Taiji, ‘very difficult’, for dolphinariums in South Korea,” they said.