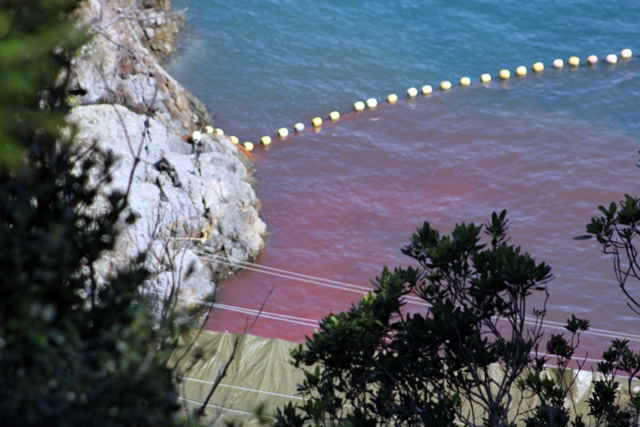 We spotted the lineup of banger boats early this morning.  I was sure they were going to put a lot of effort into this drive, knowing that a few days ago they lost so many Pacific white-sided dolphins.  Unfortunately I was not wrong.  I could do an entire blog today of distasteful words that describe how I feel about what happened in Taiji.

As their season comes to an early end this week, I fear no dolphin will be spared in Japanese waters.  The numbers are down from previous years and from the quota.   So much so, that babies are back on the menu.  Today as I watched the pod being pushed into the Cove, I could see many juvenile dolphins.  After splitting the pod into two groups, the hunters began the slaughter.  The first wave was driven, pushed, and in a few instances tail roped and dragged under the tarps.  After about 15 minuets the second group was just as brutally corralled under the tarps.

I noticed one swim back out from under the tarp, as it was partially paralyzed.  It could only swim in one direction.  The hunters just allowed it to swim out in front of the tarps for about 5-10 minutes.  Once there was no fight left, he was tail wrapped and pulled back under.

Within the hour, the Cove was red again.  The blood of 98 dolphins filled the killing Cove.

Normally, the “Town of Taiji representatives” stare into the Cove as it is happening, but today, once the blood began to flow, they all backed away from the cliff and just looked at us.  Normally they smile and joke back and forth with each other, but not today.  Today they witnessed as we did the brutal disregard for life that these 26 hunters have.  Today they all witnessed how no care is taken for a “humane” end to these dolphins’ lives, but rather an intentional barbaric slaughter.   I suspect tonight at the diner table there will not be any talk of a great, rewarding day at work.

Tomorrow we will see them all again, but not without knowing it could be seen in their faces: this is wrong!