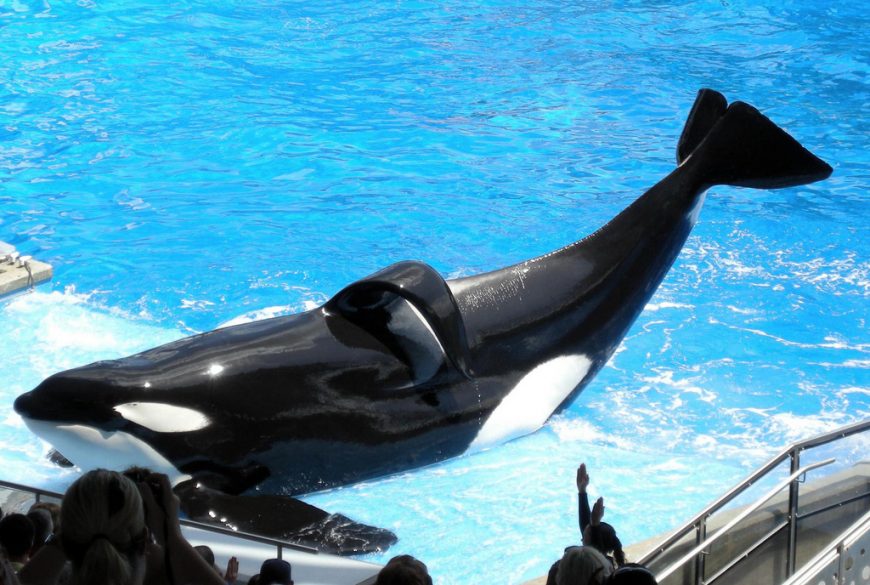 08Mar
It is with great sadness that we learned today that Tilikum, SeaWorld’s prime bull orca is very sick and perhaps even close to death. In a blog posted online today, SeaWorld announced:

We are saddened to report that over the past few weeks, Tilikum’s behavior has become increasingly lethargic, and the SeaWorld veterinary and animal care teams are concerned that his health is beginning to deteriorate.

SeaWorld Orlando says Tilikum is suffering from a bacterial infection in his lungs. In a video posted on its blog, SeaWorld vet Dr. Scott Gearhart talked about the whale’s “chronic teeth issues” but stopped short of actually naming the illness that Tilikum was suffering with.

His suggestions indicate that the orca’s illness is perhaps similar in scope to Unna’s — the 18-year-old female orca who passed away last December at SeaWorld Texas. According to one study, Aspergillus niger or Aspergillus terreus which are are the best-known causes of mycotic pneumonia in marine mammals are both fungi. Like Unna, prior to her death, Tilikum is being treated with antibiotic and antifungal medications. Sadly, despite the treatment, Unna eventually died from a systemic bacterial infection.

Gearhart described the “respiratory condition” as “extremely difficult to treat.” He added that there was “no cure” for it, but said that the “chronic and progressive” condition, “might cause his death.” The vet was swift to add that Tili’s mystery disease was also noted in wild cetaceans and suggested if Tilikum had suffered from this illness in the wild — “he would have been gone a long time ago.”

For many people who have followed Tilikum’s journey, news of the whale’s sickness was not surprising but still gut-wrenching. Tilikum’s fate was sealed from the moment he was captured on November 9th, 1983, close to Djúpivogur off the east coast of Iceland.

The exact coordinates of his capture are posted at Ceta-Base.org, and were presented in an Icelandic progress report to the International Whaling Commission (IWC). He measured 4.2 meters long.

Held at Hafnarfjördur Aquarium prior to his transfer to Sealand of the Pacific in Canada, Tilikum was moved to SeaWorld Orlando, Florida, on January 9, 1992, after his involvement in the death of Sealand trainer Keltie Byrnes. Also involved in the deaths of Daniel Dukes and senior SeaWorld trainer Dawn Brancheau, Tilikum’s distressing legacy is cemented in the documentary ‘Blackfish.’

Shame on SeaWorld again. They had plenty of time and money to retire Tilikum in a natural cove. They chose not to. They seem to make one bad decision after another. — Ric O’Barry

All of us at Dolphin Project wish the big fella well, but more importantly, we hope he finds peace.

Click here for a video report on Tilikum’s current condition.