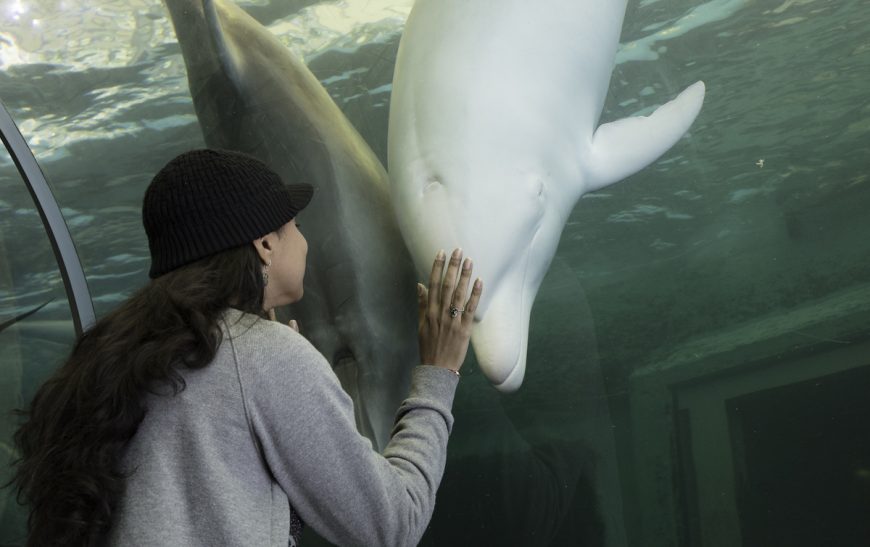 Taiji, Japan: It’s been 1,097 days – three years – since your fateful capture on January 17, 2014, and I still cannot comprehend what your life has been reduced to. The first time I saw you, you were wild and free. You shone underwater as you swam innocently next to your mother, and really did look like an angel with fins. Angel and her pod after being trapped in the cove, Taiji, Japan
Credit: DolphinProject.com

I remember thinking you were one of the most beautiful beings I had ever seen. Unfortunately, so did the hunters, because they ensured they took you captive first. Your pod fought to protect you, swimming in circles around you as they attempted to keep the hunters at bay. Of course, it was useless, and your family was forced to endure five days of torture. While your pod was left with no food (and thus, no source of water), dolphin after dolphin was ripped away for “life” in captivity. Then, on day five, some of the pod were killed in full view of the others. Out of a massive 250 dolphins, only about 70 were driven back out to sea. I wonder where they are now? I wonder if you think of your life before being imprisoned here?

You’ve had a huge impact on the world, little Angel. You’ve become famous, with your unique physical features and curious personality. Because of you, thousands of people across the world know that captivity is wrong. That it should be abolished. That this isn’t a place for you. And yet, here you are, still swimming in this filthy tank with no sign of freedom or release.

An ‘Angel’ among us, Taiji Whale Museum
Credit: DolphinProject.com

Ironically, you’ve been punished for your unusual beauty. You who deserve nothing less than to swim in the wild, free to make your own decisions have been reduced to a “prisoner for profit.” The people who come to visit you need to look closer and see the sadness in your eyes.

We are trying, Angel. We see the pain you hide behind your dolphin smile. The more we educate, the more we empower, and the more people will ultimately realize that in admiring you and others, we are smothering your very spirits.