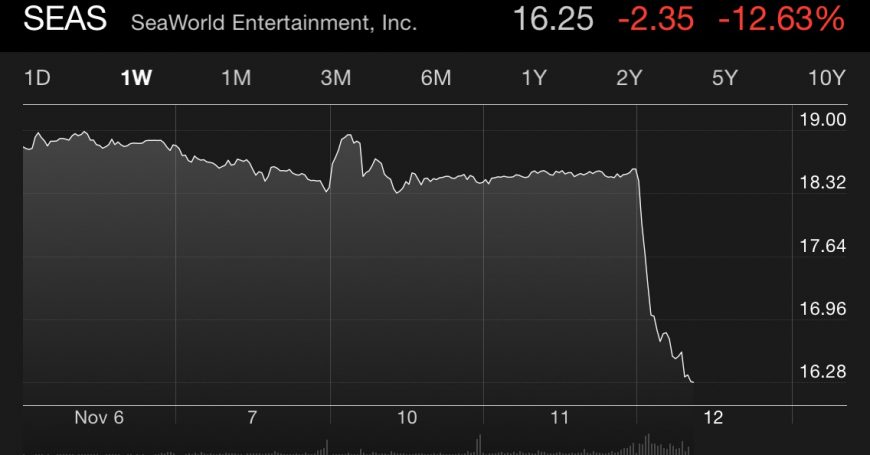 SeaWorld Entertainment Inc. hit the bottom of the barrel, or more appropriately, the tank, as its stock plummeted yet again. On December 16, 2014, stock traded at $15.43, an all-time record low. Previously, the company admitted, in an earnings report, that a 5.2% drop in attendance at its theme parks was caused by negative publicity created by “Blackfish,” a documentary that traces the history of killer whales in captivity, leading up to the 2010 killing of a SeaWorld trainer. SeaWorld said company profits fell 28%.

SeaWorld went public on April 19, 2013 at $27 per share, rising 24 percent on its debut. From its all-time high of $39.65 hit on May 20, 2013, the stock is down well over 50 percent. Their troubles don’t end there. The Rosen Law Firm, a New York-based firm has filed a class action against SeaWorld for failing to disclose improper practices regarding its orca population and denying the cause of the company’s falling attendance. The show MUST NOT go on!

This is a clear sign that the public at large has said “Enough is Enough!”  All the pressure IS having an effect. Please keep protesting, signing petitions and using your soap box to educate others. Together we can ensure a day where no dolphins are held in captivity performing stupid tricks. ~ Ric O’Barry

The Dolphin Project is asking Macy’s to consider dumping SeaWorld from the Macy’s Thanksgiving Parade in New York. Please sign the petition HERE.