The Subservience of Captivity 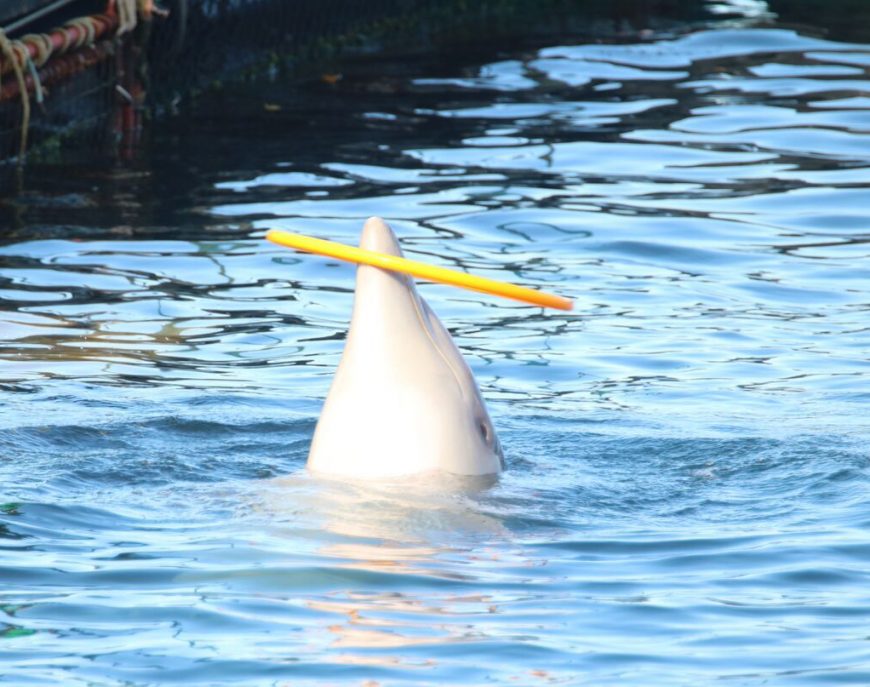 We’ve often wondered which is worse: dolphins killed in Taiji’s brutal drive hunts or dolphins selected for a “life” of captivity. While both fates for these sentient creatures equate to a death sentence, the inherent cruelty of the latter might not be immediately apparent. To a paying public witnessing dolphins jumping through hoops, squealing from “joy”, willfully giving trainers dorsal tows and performing a number of other behaviors, at least on the surface, it might actually appear as if the dolphins are having fun.

The truth couldn’t be more depressing – or disturbing.

A pod of wild dolphins can travel up to 100 kilometers a day in the open ocean. Each member plays an integral role in ensuring the health and well-being of the group. Babies learn crucial survival skills from their mothers. Prey is tracked via echolocation, the projection of high-frequency sound waves and the subsequent interpretation of the resulting echoes. In other words, these are mammals who have had 50 million years to perfect being a dolphin, and have developed the right methodology to thrive – and survive in a watery world. That in itself is a remarkable feat, considering dolphins are air-breathing mammals who, without breathable oxygen, would die.

Imagine the shock, stress and trauma to a dolphin when it is forcibly taken from a complex, familial society. And it’s not just traumatizing on the animal taken captive: the entire pod suffers. Typically younger, fertile animals are selected due to their less blemished skin and their ability to reproduce.

Taiji, Japan is ground zero for the captivity industry. In addition to the gruesome slaughters taking place here between the months of September to March (this year’s quota is 1820 dolphins comprising seven species), 150 bottlenose dolphins have been “pre-ordered” by marine parks and aquariums throughout the world to fill their concrete tanks. Small, floating pens dot the waters around the cove, these enclosures filled with freshly-caught recruits. It is here the animals are manhandled, conditioned and trained before being shipped to destinations unknown.

Dolphin Project Cove Monitors have filmed some of the procedures captive dolphins are forced to endure, shedding light on their required subservience as part of their preparation as circus performers:

In all instances, the dolphin is given a food reward for the successful completion of each behavior. As such, the animals are kept hungry to ensure their compliance.

What happens when the show is over?

For a collective species as evolved as dolphins, sentient creatures used to exploring the vast open waters of the world’s oceans, confinement in artificial tanks is enough to cause psychosis, depression and even suicidal behaviors. One of the earliest documented examples of self-mutilation was observed in Hugo, a captive orca held at the Miami Seaquarium. After 12 years of performances and repeated brutal, self-inflicted damage to his head, Hugo died of a brain aneurysm.

Take a look at the video clips below. Then help spread the word that dolphins and other whales don’t belong in captivity.

PLEDGE NOT TO BUY A TICKET TO A DOLPHIN SHOW

Take the Pledge now and share with your friends.