The Sky’s the Limit! 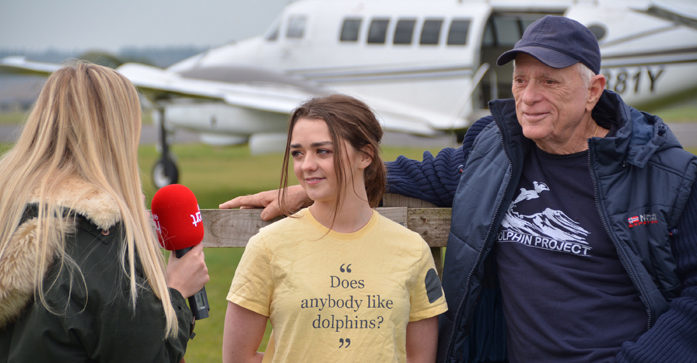 High above the English countryside, Ric O’Barry and Maisie Williams proved being an advocate for dolphins doesn’t just involve activities on the ground. In fact, on October 17, the pair jumped out of a perfectly good airplane and into the big blue – the sky that is – in their skydive to raise awareness and dollars for dolphins.

“The jump was fantastic! As an ambassador for Dolphin Project, I was so happy to be able to raise money and awareness for their amazing cause. It was so much fun to celebrate Ric’s 76th birthday by jumping out of a plane 15000 feet in the air!” ~ Game of Thrones star and Dolphin Project Ambassador Maisie Williams “What a great day spent with Maisie Williams,” said Ric. “A most interesting lady indeed. Fearless.”

“We got into the plane behind us and jumped out at 15000 feet, free falling at more than 120 miles per hour for 60 seconds. (A full minute is a very long time when you are falling to earth.) At 3500 feet the parachute opened and the beautiful, English countryside began to reveal itself. An absolutely breathtaking experience.” ~ Ric O’Barry

In fact, it was so cool that Ric and Maisie decided to make it an annual event. Have an idea that’s outside the box? A creative and innovative way to help support Dolphin Project and bring the plight of captive dolphins to the masses? Hop over to our CrowdRise page and put your imagination to a great cause!

With our Cove Monitors physically present in Taiji, Japan to document the brutal dolphin hunts for the entire 2015/2016 season, your help is urgently needed – and appreciated. Maisie herself will be going to Taiji later in the season as a Dolphin Project Cove Monitor. We did it!
Photo credit: DolphinProject.com

Shop cool Dolphin Project gear, including Maisie’s “Does anybody like dolphins?” shirt.