The Sea Song and Video by Matt Sorum 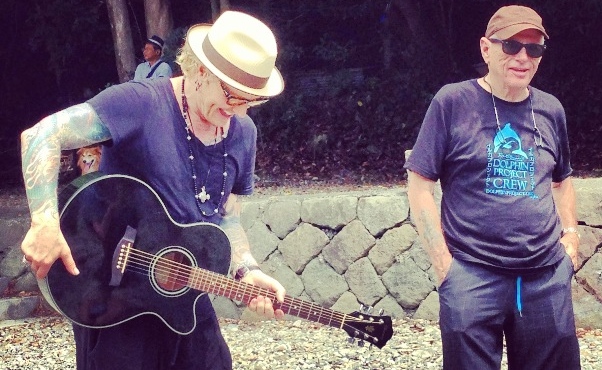 (NOTE:  I first met Matt Sorum in Los Angeles – he is the former drummer for Guns ‘N Roses and is the founder of the super-group Kings of Chaos.  I was impressed by Matt’s heart-felt support for the dolphins, and he readily agreed to go with me to Tokyo and Taiji, where he sang his songs (including The Sea) on the beach and joined with grassroots activists from Japan and around the world in protesting the slaughter of dolphins.  His new video is a tribute to dolphins and the oceans.  I hope you enjoy his music as much as I do. – Ric O’Barry)

When I came up with concept for my video The Sea, it was after I connected with Ric O’Barry and Dolphin Project, after traveling to Taiji, Japan, in September of 2013 with Ric and his son Lincoln.  Dolphins represented so much more to me.

The dolphin has a very keen sense of family and who they are in the wild kingdom.  Seeing them struggle in the Cove at the hands of their captors made me hurt for them.

They possess the ultimate freedom.

Seeing them ripped from their home against their will was heartbreaking.

There is no more an intelligent being on this planet.  Their self awareness is beyond our comprehension.

Humans search for that sense of awareness most of their lives.  The Sea is a song about soul searching and looking for the peace within.  The whale in the video is the strength within.  The most majestic creature and definitely the largest.

The whale represents finding your strength within and to use it with passion as they do every time they leap from the sea.  Towards the end of the video I find my true love, my wife of 6 months, Ace Harper.

I am finally home and safe at the water edge.  The dolphins are the perfect love together in the end clip.

As the 2 dolphins swim off in to the sunset.  The metaphor is the purest most beautiful site of the bond that holds us all together.  Love.

The dolphin family is the greatest example of that love for family.

Photos by Daniela Moreno and Kings of Chaos.