The Fate of Angel the Baby Albino Dolphin? 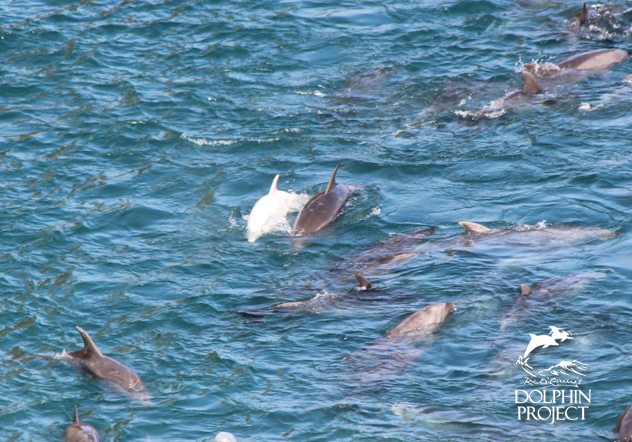 Back in October 2006, I was present in Taiji with my video camera to record a capture of a pod of bottlenose dolphins for captivity.  One of the dolphins had a very odd characteristic:  It had four fins instead of two.  It had the usual front flippers, but there were also two very small pectoral flippers towards its tail end, vestiges of the time in the past when dolphins had four legs.

In a press release, I said about the capture: “This was one of the most violent dolphin captures that I have ever witnessed in my 45 years of working with dolphins.   Essentially, twelve dolphins out of the pod were manhandled out of the water only to be isolated from their pods mates as those pod mates were butchered.  And all the representatives from the aquarium industry helped with the killing as well as the captures.”

The poor four-finned dolphin caused quite a sensation in Japan including many news articles, and the Taiji Whale Museum proudly put it on display, with signage and a lot of publicity.  Such an attraction in Japan can bring in many tourists interested in seeing what is essentially a freak show.

Sadly, the dolphin died in 2013, after only 6 1/2 years in captivity, far short of the life span of a healthy wild dolphin.  This is the fate of all captive dolphins, of course, to live only a short while in captivity before succumbing to a variety of ailments caused by boredom, injuries, trauma, and suppressed immune systems.

We are calling this poor little dolphin “Angel.”

So what will likely happen to Angel?  Angel was taken from its mother to the Taiji Whale Museum this morning.  This is particularly foolish as the calf’s likelihood of survival in captivity would be enhanced if the mother was with Angel.

There is no doubt that Angel represents a huge prize for the dolphin hunters, and they have given it to the Taiji Whale Museum, which they work for.  The Museum (really a whaling museum rather than a whale museum) is owned by the Taiji town government and brokers dolphins all over the world, including providing dolphins for the one hundred or so dolphinariums in Japan.

The most likely scenario is that the Taiji Whale Museum would keep little Angel for their own promotion and to attract tourists.  Taiji is out of the way in Japan, so tourism is always problematic for the town.  An albino baby dolphin will bring a great deal of interest.  And again, there will be a freak show in the museum that houses live dolphins and sells whale and dolphin meat in the gift shop.

Albinos in the wild face many problems.  They are conspicuous, and so are easier for predators to spot and catch.  Without skin pigmentation, they are more susceptible to skin problems from the sun.

(Ironically, in the wild, dolphins usually do not suffer from sunburn because they are underwater so much of the time.  But in captivity, dolphins and orcas don’t tend to remain underwater as much and will often sit at the surface in a corner of their tank.  Sunburn becomes a real problem to captive dolphins and whales.)

But Angel doesn’t deserve a life sentence to captivity.  Angel was torn from her or his mother, which she still depends on.  And her mother will be slaughtered and sold for meat, while Angel will sit in a tank to be a freak on display.

Please help in any way you can!  We need your continuing help to end the Taiji dolphin hunts.