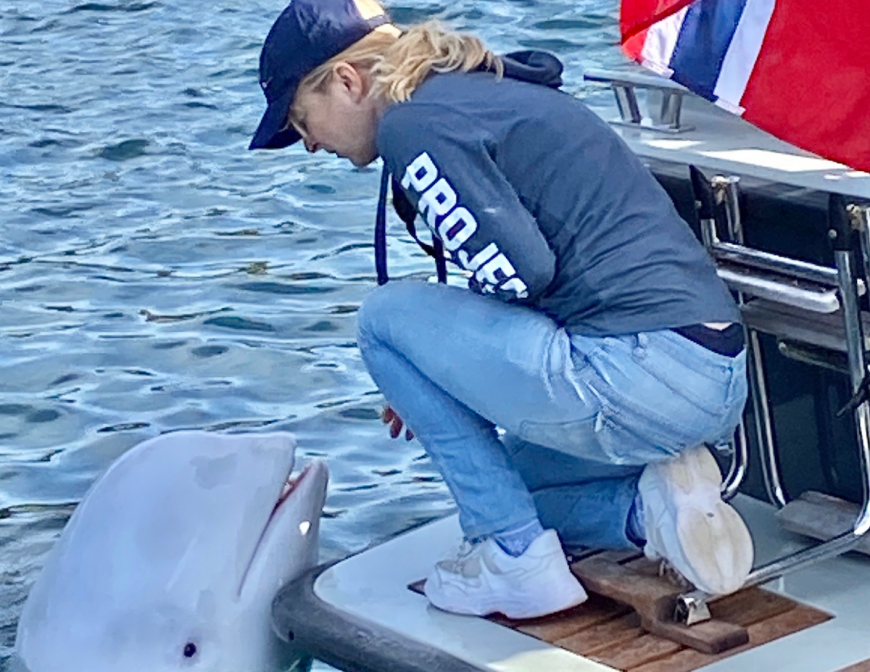 To see him is to love him. When Hvaldimir appeared right in front of us, I was overwhelmed with joy at meeting this gorgeous, friendly beluga whale that I had heard so much about. Hvaldimir radiates immense intelligence combined with energetic playfulness and childlike curiosity, and it feels like an honor to meet him. And now that I have, there is no turning back.

Regina Crosby, a resident of Norway and a filmmaker, is working on a documentary about Hvaldimir and has been monitoring his whereabouts for over a year, since he first showed up in northern Norway in April 2019. She has also been questioning Hvaldimir’s safety. After spending much time talking to residents in the area, she has identified several threats related to human interaction, and asked Dolphin Project for help. Since she introduced Ric O’Barry and me to Hvaldimir in northern Norway, we haven’t stopped thinking about him. Crossing this beluga whale’s path comes with a huge responsibility, and we have serious questions to answer: Hvaldimir, where do you come from, and how did you end up here in the fjords? Why are you all alone? And how can we help you? 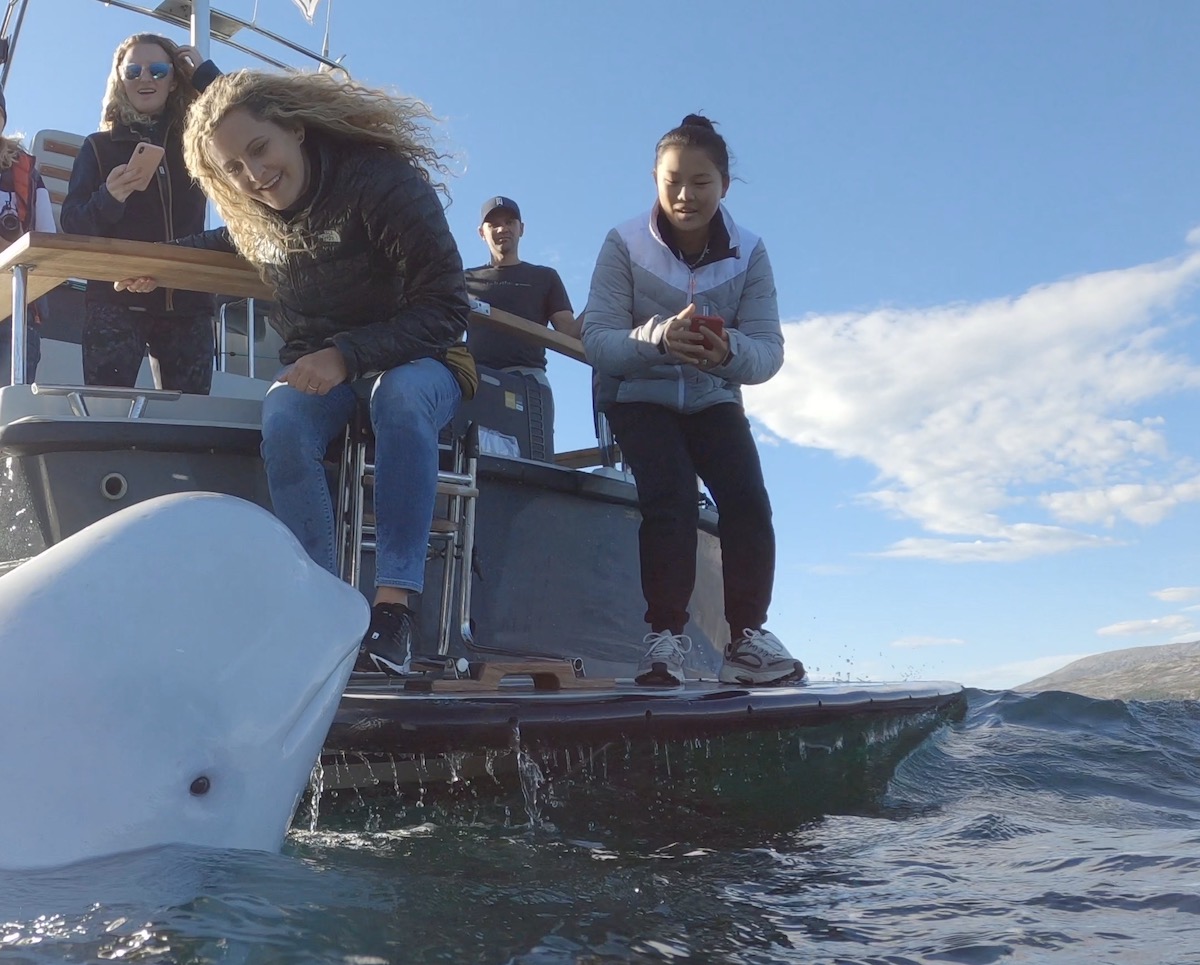 Regina Crosby, who is a resident of Norway, has been monitoring Hvaldimir’s whereabouts for over a year. Credit: Inge Wegge/Producer at WEGGEfilms

Hvaldimir was first noticed near Hammerfest last spring. He was wearing a tight harness, but local fishermen were able to remove it before it caused him any problems. They immediately noticed its inscription: “Equipment of St. Petersburg.” That set off speculation that he might be a trained Russian whale spy that had somehow managed to escape his human captors. Just like the United States, Russia trains whales, dolphins and other marine mammals to carry out various tasks, such as retrieving objects from the ocean floor, detecting mines, finding enemy divers, and guarding ships and naval bases. Most likely, Hvaldimir is one of countless marine mammals that have been exploited for military purposes.

His behaviors fit well into the assumption that the Russian military trained him to fetch objects and bring them back to his handlers, yet no one has claimed Hvaldimir. We do not know if he was captured from the wild or born in captivity. We do not know how long he spent in captivity before showing up in Norway. However, it quickly became obvious that Hvaldimir is used to being around people. Video has emerged of him playing fetch with a ball, and there is also video footage of him fetching a woman’s sinking phone. 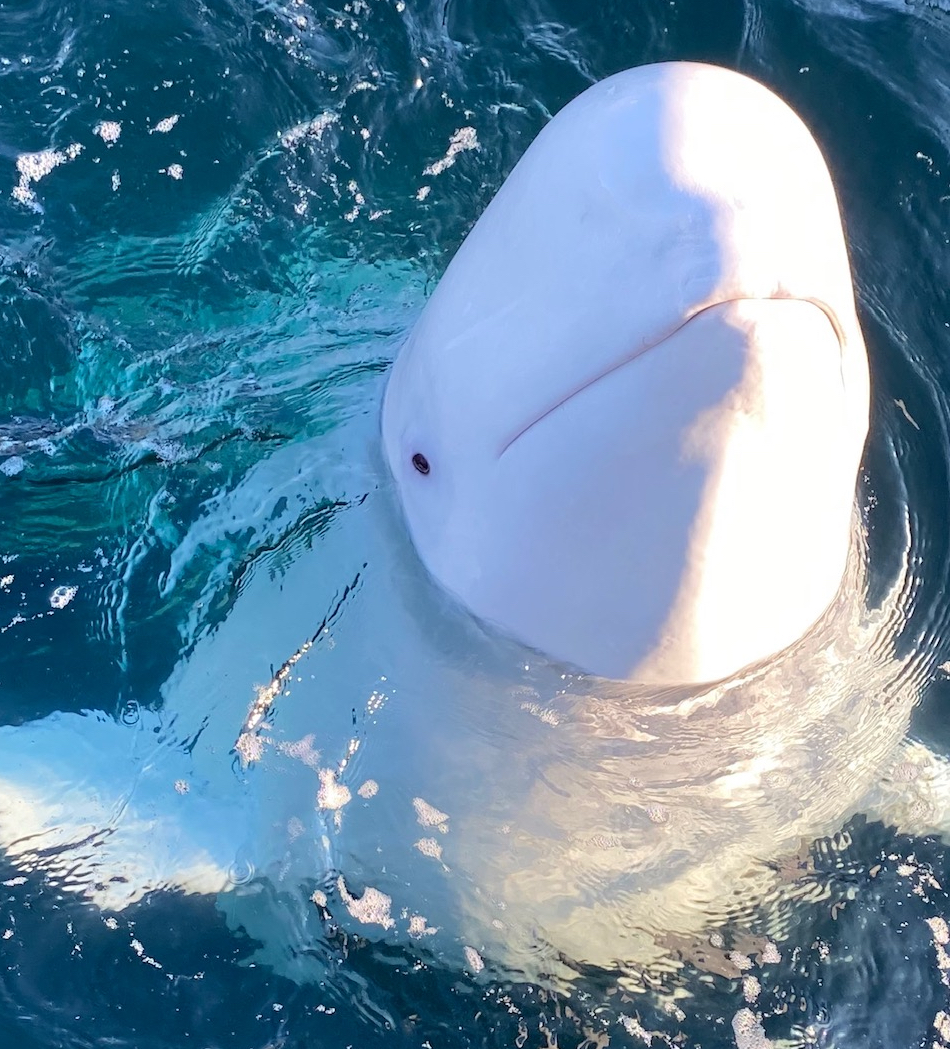 The world-famous beluga whale, who has been named Hvaldimir, was first noticed near Hammerfest in Northern Norway last spring. Fishermen were able to remove the tight harness he was wearing. Credit: Mai Li O’Barry

It didn’t take long for Hvaldimir to become an internet sensation. At first, his presence in Norway seemed like a feel-good story about a whale who swims from fjord to fjord, seeking out human company as if on a mission to convey a beautiful message about interspecies contact. Regina envisioned making the documentary about this former captive beluga whale who is enjoying his newfound freedom in the picturesque fjords. She quickly realized, however, that Hvaldimir’s loneliness and consequential attraction to humans puts him at risk, and that his story may not have a happy ending unless humans do something to help him.

Early on, Regina identified several threats to Hvaldimir’s well-being and even his life. Among them are commercial fishing nets, fish farming, and boat propellers. Regina found out that large fishing nets in the area are left in the water all day. If Hvaldimir gets entangled underwater in one of them, he will be unable to reach the surface to breathe, and he will drown. She also learned that Hvaldimir has been struck by boat propellers in the past. “Even after being hit, he has continued to come up to boats within inches of the propellers, even while the propeller is still running,” said Regina. She continued, “With Hvaldimir’s habit of getting close to motorized boats and other human activity, it’s just a matter of time before he gets into serious trouble.” 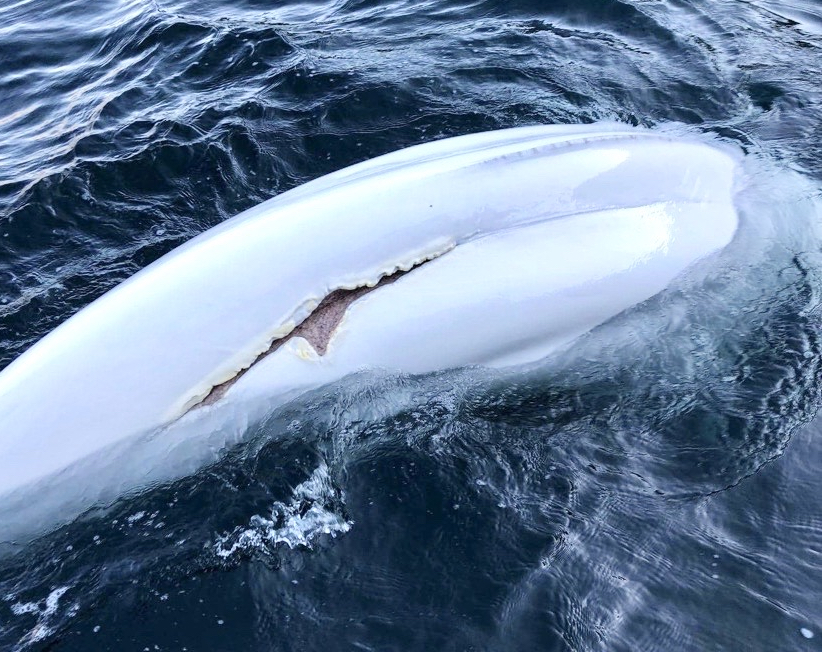 Hvaldimir sustained a nasty-looking injury on his body last month. His attraction to boats and human activities could put him in serious trouble. Credit: Richard O’Barry

Regina had warned about these threats for months. Then, in July 2020, Hvaldimir presented with a nasty-looking gash on his body. The wound could have been from a boat propeller or from fishing equipment—no one knows for sure. But it confirmed that Hvaldimir is in danger. “If Hvaldimir is fatally injured by a boat propeller, or if his lifeless body is found entangled in a fishing net, we will forever regret that so little was done to protect him. We simply cannot let that happen,” Regina said.

Earlier this year, she asked Dolphin Project for help in identifying a solution for Hvaldimir. After spending time with Hvaldimir in Norway, Ric reached the same conclusion as Regina: Hvaldimir is vulnerable and needs protection before tragedy strikes. Highly curious and sociable, this whale is attracted to people, fishing equipment, and motorized boats. And that puts him in danger, potentially grave danger. There is a very real risk that Hvaldimir at some point will run out of luck, and he completely depends on humans to keep that from happening. 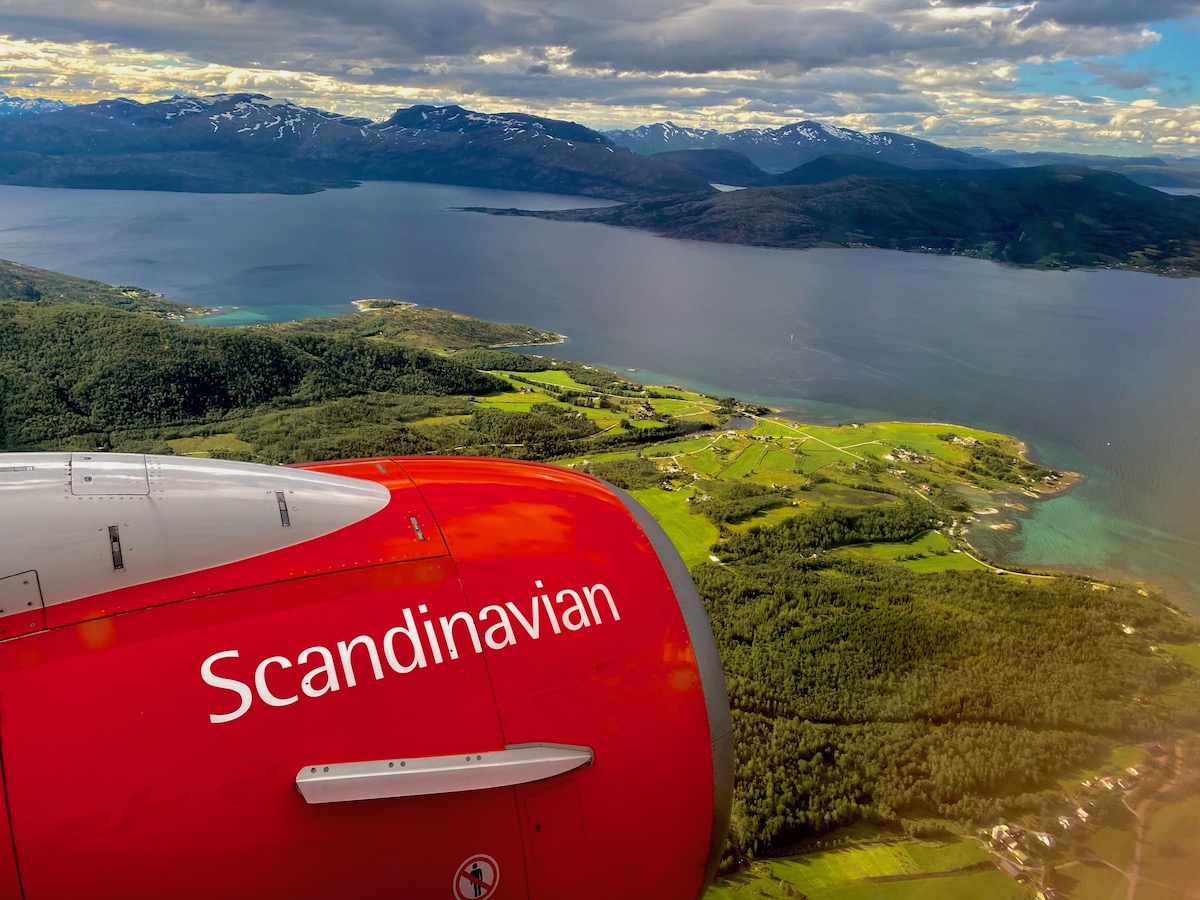 With its large and stunning fjords, Norway would be the perfect place for a beluga whale sanctuary. Credit: Richard O’Barry

The solution is simple: establish a large protected sanctuary for Hvaldimir in one of Norway’s fjords. The sanctuary would consist of a spacious fenced-off fjord, giving Hvaldimir space to roam,  and a floating sea pen in the middle, in case he needs medical attention. In the sanctuary, Hvaldimir would be safe from fishing nets, fish farms, and boat propellers. “Hvaldimir has to be moved out of harm’s way, but there is no reason for him to leave the country. Norway, with its stunning fjords, is the perfect place for a beluga whale sanctuary,” says Ric. He adds, “Hvaldimir is a defector who needs asylum. The Norwegian government has a unique opportunity to give that to him.”

While we may never know the details about how this amazingly gentle, trusting whale came to Norway’s fjords, there can be no doubt that Hvaldimir has suffered at the hands of humans. We can only guess at the horrors he lived through as a captive in the Russian military. Yet somehow this whale escaped—and probably saved his life by doing so. It would be devastating if, after all he has endured, he loses his life in a preventable accident in Norway simply because none of the people he chose to trust took the necessary steps to protect him.

Featured image: Hvaldimir is an amazingly gentle, curious, and trusting whale. It feels like an incredible honor to meet him. Credit: Richard O’Barry

Say NO to the show – get on a boat! Do you dream of seeing orcas in their natural environments? Don’t get
read more 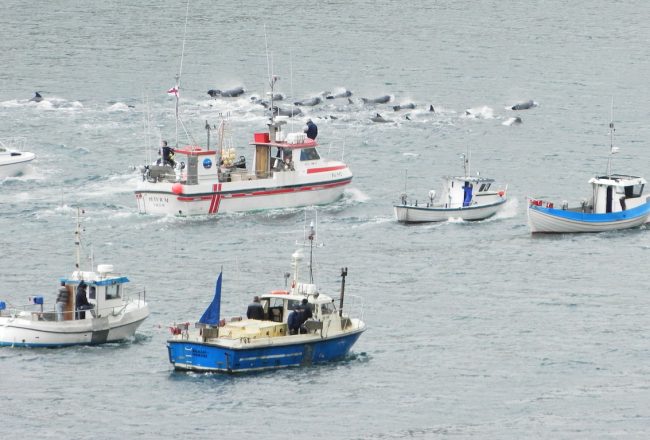 Is Norway Creating Their Own Killing Cove?

Is Norway about to create a killing cove in Scandinavia, like in Taiji, Japan? It looks like some people there are trying
read more 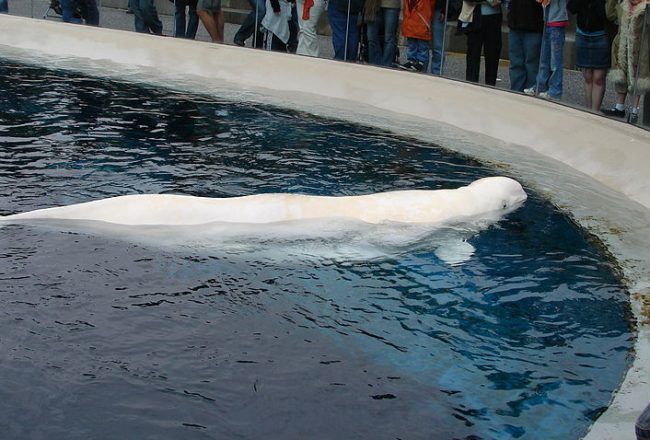