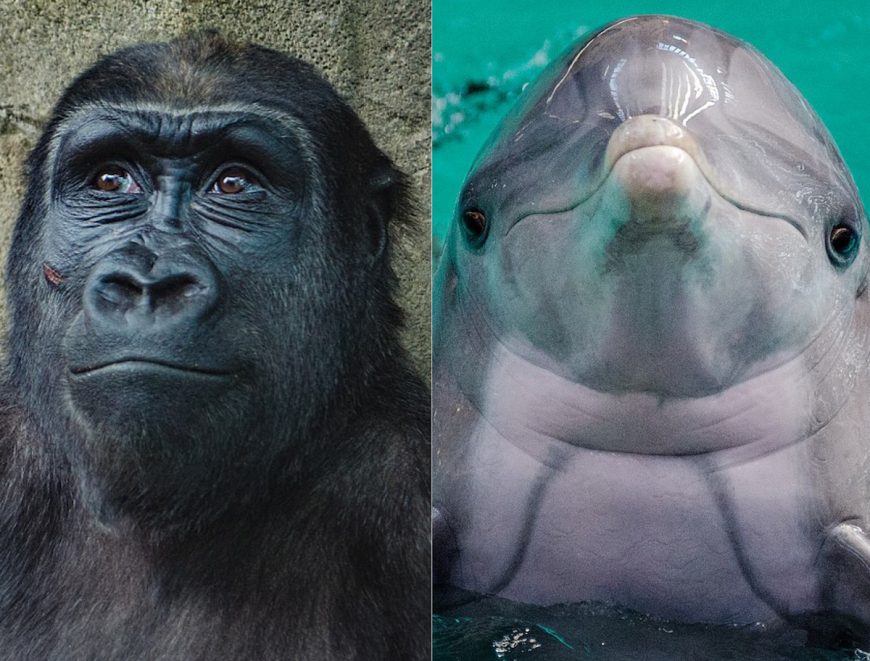 It was depressing to watch a video of celebrity movie director James Cameron promote Avatar: The Way of Water during a dolphin show in Japan. Several weeks earlier, I had bought tickets to see the movie with our daughter Mai Li, and when we were sitting in the theater, I kept thinking about that scene of Cameron and his colleagues applauding enthusiastically as a group of dolphins worked their way through a series of trained circus behaviors inside a minuscule and artificially lit dolphin stadium in Tokyo. The dolphinarium is called Maxell Aqua Park Shinagawa and is just one of close to 50 dolphin exploitation parks in Japan, which is a country about the size of California. The presenter of the event started off by explaining to the Avatar crew what was about to happen. He said: “So we are going to start the press conference now (…) so James, we want to start with your “Welcome to Pandora,” and the dolphins will start a beautiful show. So are you ready to do that?” Microphone in hand, Cameron responded: “All right, here we go: and welcome to Pandora!” With these words, the dolphin spectacle began. The dolphins had to perform several high-flying aerial jumps and spin around in the water, and they also carried out a trick known as tail walking. In another stunt, the dolphins obediently carried their trainers on their backs while quickly swimming around the perimeter of the tank. Exploiting dolphins as live surfboards is popular with audiences, and the film crew looked pleased, while scenes from Avatar played on a large screen behind them. When the loud Las Vegas style performance ended, the presenter told everyone to “please put your hands together for the dolphins!” and then he directed a question at Cameron: “James, how was the dolphin show?” In his response, Cameron reached millions with the message that dolphins thrive in tanks and perform because they like it. He said:

Cameron’s reaction to the show is shocking to me, as it completely contradicts the message of Avatar: The Way of Water. This is a movie that celebrates our connection with wildlife, while dolphin shows celebrate human dominance over nature. Avatar praises values such as family, compassion, and freedom, whereas captive dolphin spectacles are based on stealing dolphins from their families and forcing them to give up their freedom to entertain humans. Just like the main characters of Avatar, dolphins share strong family ties and will do everything in their power to protect their young from capture and abuse. Avatar strives to portray the importance of family bonds, and I find it astounding that the filmmakers did not immediately recognize the performing dolphins’ desperate plight. Do they not know how closely bonded dolphins are with their pod members? Surely, they must know that dolphins in nature do not perform tricks for humans, and they must also possess some understanding of how dolphins in the oceans enjoy the ability to move freely in a world without any man-made barriers. So how could they just sit there and applaud? Why did they not leave the stadium in protest, and how long after the dolphin show had ended did they remain at the stadium, acting as if everything was perfectly fine? Later, they even walked up to the dolphin tank for a photo shoot while smiling and waving at adoring fans.

The madness didn’t stop there. Right after Cameron had joked about how the dolphins must have been asked beforehand if they wanted to perform, some of the dolphins were instructed to make airborne sounds through their blowhole, as if they were actually responding to his comment. The presenter then “translated” what the dolphins were saying: “They are happy to be in the next show, the next movie!” To this, Cameron exclaimed: “Can I come and be in the show? I wanna ride!” As he said “I wanna ride,” he made a circular motion with his hand to show the dolphins’ swimming pattern in the pool. The dolphins were once again instructed to make airborne sounds, and the presenter translated their response to Cameron’s request: “That’s a yes!” Cameron gave a thumbs-up and said, “OK, good!”

Sigourney Weaver, who played conservationist Dian Fossey in the 1988 film Gorillas in the Mist and has since become a powerful voice for gorillas and other wildlife, also addressed the crowd. She said: “Thank you for having us today, this was so exciting, by far the best and most amazing show with these amazing animals I’ve ever seen.” She added that the 14-year old girl Kiri, whom she portrays in Avatar, would have loved the show, too. Her exact words were: “Let me just say that Kiri would have loved all of this so much, and mostly because the dolphins looked like they were having a wonderful time, so thank you.” Sigourney’s positive take on the captive dolphin spectacle was especially surprising to me, since she is the recipient of the prestigious Jane Alexander Global Wildlife Ambassador Award. I couldn’t help but wonder how she would have reacted if gorillas were performing for her inside a small cage instead of dolphins. Would she have loved it just as much? And if the answer to that is no, then why not? After all, dolphins have larger brains than gorillas or anybody in the room.

Stephen Lang, too, complimented the dolphin show. He said: “We’ve been on the road for a while, and we’ve been received with open arms and graciousness everywhere we’ve been, but I must say, no place has brought a smile to my face the way these wonderful animals have.”

At the very end of the press conference, the music started up again, and the dolphins were ordered to stand upside down in the water and wave goodbye to the Avatar crew with their tail flukes. The crew applauded and waved back at the dolphins.

All these mind-boggling scenes were on my mind as I watched Avatar with our daughter. The movie is so spectacular and beautifully made, and I normally would have enjoyed every minute of it, but it was impossible for me to watch it now without thinking about the victim dolphins who deserve so much better than being trapped in a lifeless concrete box inside of a building and having to entertaining crowds of fun-seeking visitors, including the Avatar crew.

The most moving scene in Avatar, to me, is when hunters kill a gigantic whale-like creature in the sea. Deploying motorized boats, they terrorize the creatures with explosives, deliberately targeting a mother swimming with her young calf. The man who leads the hunt knows that the calf can’t swim as fast as the grown-ups. This makes the calf’s mother an easy target, as there is no way she will leave her calf behind. Taking advantage of the strong social bond between mother and calf, the hunters harpoon the mother, and she dies in agony.

That scene brought back haunting memories of the brutality that I and other dolphin protection activists have witnessed in Taiji, Japan, where dolphins are terrorized with sound, chased to exhaustion, and herded into an escape-proof small cove. In a grueling selection process, a team of dolphin trainers enter the water and choose the dolphins that fulfill the desired criteria for use in shows. They typically seek out young dolphins with no scars or blemishes, and when they have forcefully separated the terrified calves from their mothers and dumped them into awaiting steel cages in an adjacent bay, they let the hunters kill the rest in an enormous bloodbath. This scene of death and destruction is what dolphin shows in Japan are based upon, and it was happening in the cove in Taiji at the exact same time as the Avatar publicity stunt took place at Maxell Aqua Park Shinagawa. No dolphin has ever volunteered for a life inside a small tank in a loud and dreary show stadium, and during capture, they fight with all they have, much like the main characters in Avatar who are also subjected to a merciless hunt. But unlike in the movies, there is never a happy ending for the dolphins in the cove. For them, the hunt always ends with either death or lifelong imprisonment.

Dolphins are free-ranging, highly social, and intelligent beings. In nature, they nourish their strong social bonds in a pod’s complex culture, exhibiting behaviors that are passed down from one generation of dolphins to the next. We have no right to take that away from them to satisfy a self-absorbed craving for casual amusement. The publicity stunt at the theatrical dolphin stadium in Tokyo might have damaged the dolphin anti-captivity movement in ways we can’t even understand yet, especially within Japan, and it is my sincere hope that the creators of Avatar will publicly acknowledge the wrongs of exploiting dolphins to promote an ocean-themed movie that contains a message about respect for nature. I urge them to help us repair the damage by sending out a strong message in both Japanese and English to denounce the inherent cruelty of sentencing dolphins to lifelong incarceration and forcing them to jump and dance on command in small, barren pools. If they do write such a statement, we would be happy to share it at a press conference in Tokyo and on our website.

And if for some reason the Avatar crew decides to ignore or belittle the damage they have caused, then I hope they will at least concede that dolphins possess far more knowledge about the way of water than any team of filmmakers ever could. 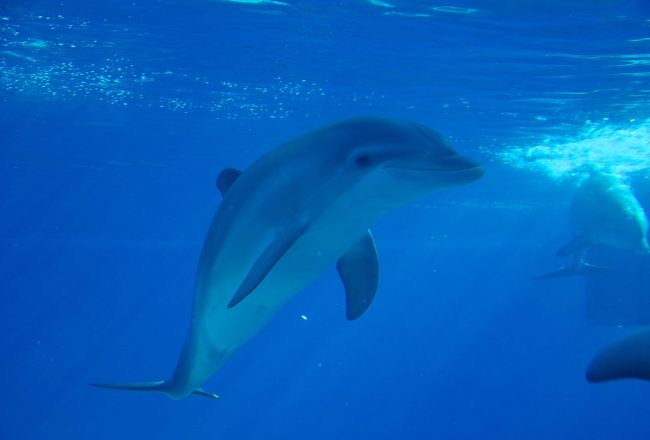 Four Dolphins Dead in Ten Months at The Mirage