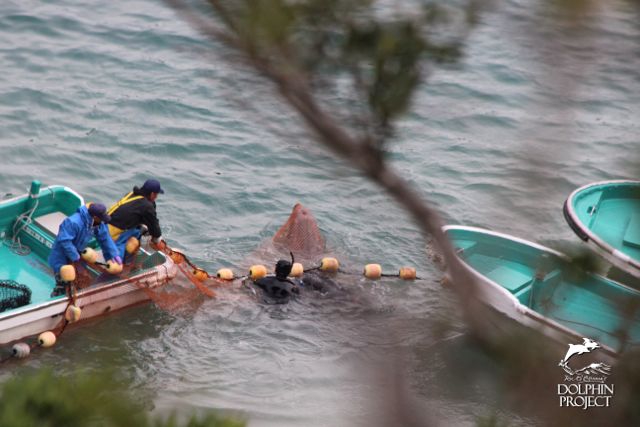 On the morning of January 25, the boats went out early as usual. The sky was clear and there was no wind – not a good sign. They went far out into the horizon and at about 9:15 a.m., started to return in drive formation. As the boats were spread far apart, it was obvious this was a big pod. There was little fighting taking place. By the time I got a visual of the pod, they were already tired, having just been driven in. The boats quickly pushed them into the killing cove and the slaughter began almost immediately. It’s hard to explain in words what witnessing a slaughter feels like. Since the killers cover the shore of the cove with tarps to hide from us, all one can really see is the water, as it turns red with the blood of dying animals. But that doesn’t mean the slaughter can’t be heard – because it can. Dolphins splash and scream as they are losing their lives, while killers laugh as they scramble to kill each and every soul. In this case, it was a total bloodbath. I did see some dolphins underneath the tarps as they were pushed to shore to meet their untimely deaths. Needless to say, it was horrific, as all slaughters at the cove, are.

Immediately after, I was confronted with a new horror: the sound of absolute silence, one that chilled me to the bone. And at that moment I knew it was over. All the dolphins were dead. I saw a diver diving in the blood-red water, searching for dead bodies that might have sunk to the bottom. How could he see? How could he possibly feel comfortable doing this? There was nothing left to do but wait for the skiffs to carry out the bodies. And they did, covering them with tarps so that pictures couldn’t be taken. A total of three skiffs loaded with bodies left for the butcher shop, which incidentally, is also covered in tarps. This is telling in itself: the need to go to such lengths to hide under cover proves what a disgrace and sham this entire operation is. Despite their claims, there is nothing traditional about the dolphin slaughter in Taiji. On January 26, the boats went out far past the horizon but came back empty-handed, likely due to approaching bad weather. It was a Blue Cove Day and a much-needed break for everyone.

January 27, however, brought a return of tragic events. The boats went out early morning and by 8:40 a.m., all 12 were in drive formation, pushing a pod in. These were bottlenose dolphins, the most popular and sought out for life in captivity. It took a little longer than usual, but the entire medium-sized pod of 25-30 dolphins was eventually pushed into the cove. Since it was late, the terrified animals were left in the killing cove overnight. The dolphins had no access to food and were completely exhausted. In fact, as I write this, they are still there now, awaiting captive selection. January 28 – I knew it wouldn’t be a good day, as this precious pod was held overnight in the cove. At precisely 6:40 a.m., skiffs started to head to the killing cove to begin captive selection. I could see the trainers from Dolphin Base on the shore, ready and eager to pick their next prisoners. These people work with dolphins on a daily basis, yet they understand so little about them. Captive selection is always a brutal process. Dolphins become entangled in nets as they try to escape, suffering bloody noses and scratches all over their faces. Skiffs scare the dolphins towards the shore, using their engines. During this, propellers often hit the dolphins, resulting in horrific injuries. This is exactly what I saw happen today: After being run over by a skiff, the dolphin, gushing blood from its injury, attempted to escape. As he swam, he left a trail of blood behind him. It was sickening – one of the worst things I had ever seen at the cove. Then killers took him under the tarp and ended his life. What a sad ending for such a wonderful creature! Trainers and killers took their time to separate the dolphins into groups. “Pretty” ones were chosen for captivity, while the others were separated into two sub-groups: one comprised of animals to be dumped at sea, and the other, destined for slaughter. Skiffs carrying two dolphins each went to Dolphin Base. With such a large pod, the day was very profitable. The dolphins left behind then started splashing and screaming as their lives were drained out of them. I could hear all this clearly – yet another horrific day in Taiji, as almost all days are. In the end, approximately 15 dolphins were killed, 13 were taken captive and about 8-9 were dumped out to sea. Any juveniles still nursing were left to fend for themselves, likely unable to survive this process.