Terror in The Cove as Striped Dolphins Slaughtered 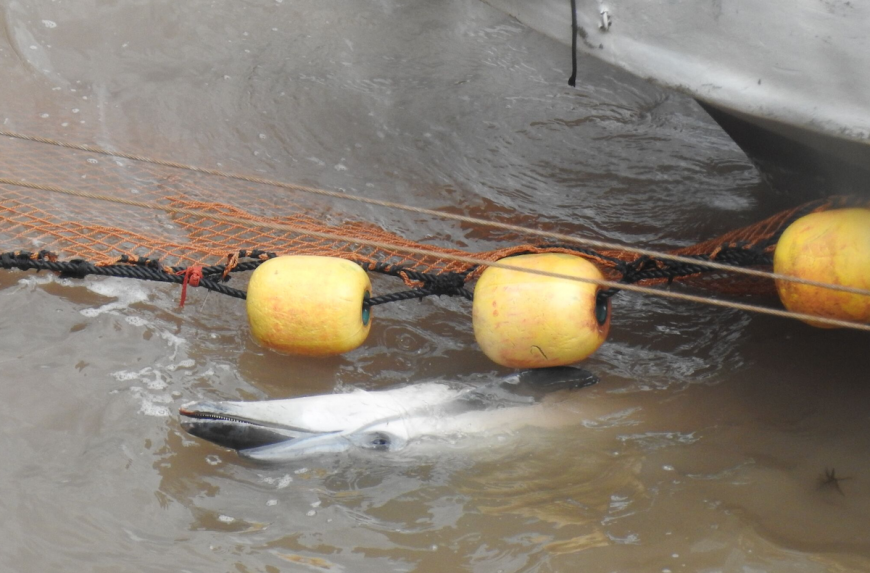 Taiji, 11/8/18: The day started out hopeful as there was a little wind and the ocean looked choppy. As the morning went on, I scanned the ocean horizon for the banger boats, hoping to see them come in empty-handed. And, they started to. Suddenly, I noticed a banger boat leaving its docked position, turning around and heading back out to open water. My heart sank as boat after boat went racing out to sea. I knew that dolphins were in trouble.

While the remaining banger boats may have located the dolphins, it is also possible that they were tipped off by local fishermen as there were many fishing boats in the area. With so many eyes looking for them, if dolphins pass by the Taiji coast at the wrong time, there is very little chance that they will pass by, undetected. Immediately upon arrival to the lookout area, I could see they had located a pod of dolphins and were driving them swiftly towards the Cove. As I passed the butcher house, silver tarps were being positioned to hide the activities there. That is a telltale sign of an impending slaughter.

When I made it to the top of the hill, the banger boats along with skiffs were throwing their slap paddles in the water, guiding the terrified dolphins into the Cove. The drive happened very quickly and soon, a pod of striped dolphins was netted into the Cove, their fate sealed. 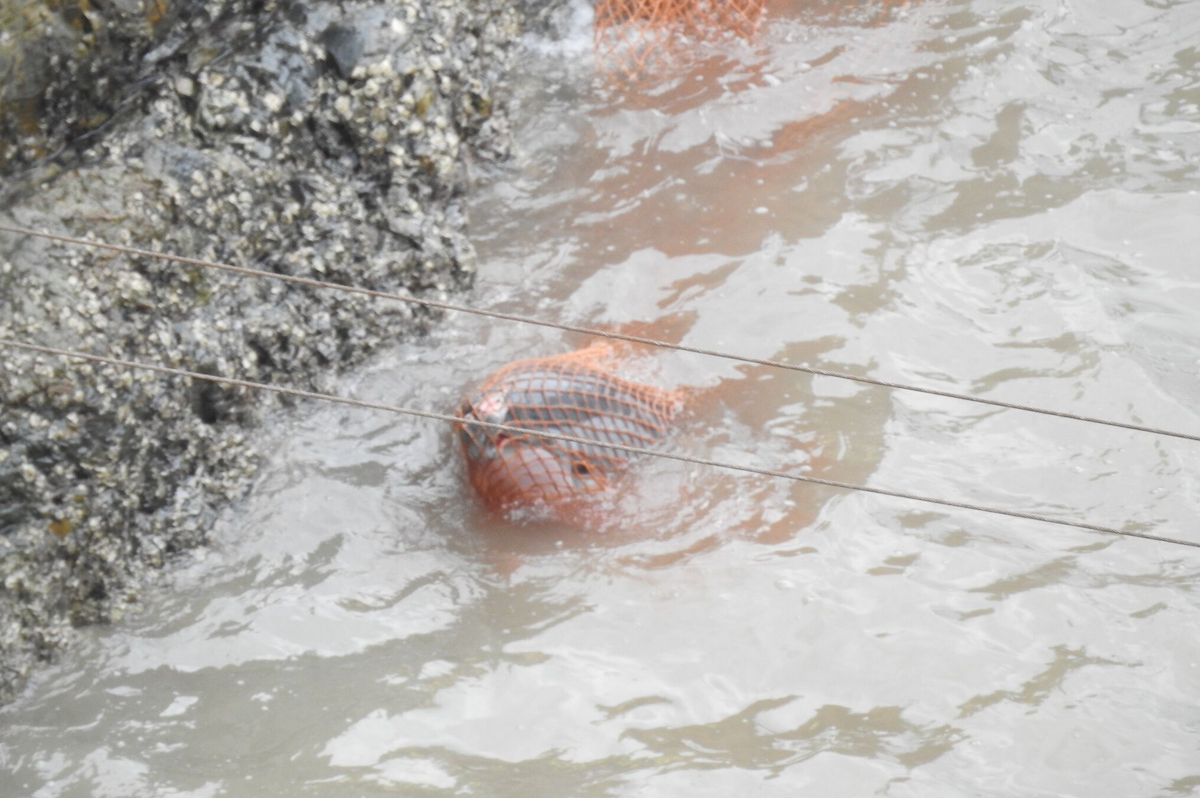 Striped dolphins suffer greatly in Taiji. Rarely taken for captivity and rarely released, most often they are brutally slaughtered. Striped dolphins go into utter and complete panic when they are being pushed towards the tarps. The hunters seem to be particularly brutal with them, often running over them with skiffs and letting them thrash on rocks or struggle in the nets. Unfortunately, striped dolphin meat seems to be popular, with packaged meat sold at tourist shops as a novelty, and in local markets throughout the area.

I could see it was a fairly large pod as the dolphins passed by and were netted into the Cove. Striped dolphins are highly social and often travel in pods of 25-100 or more. Despite doing poorly in captivity, the hunters left to retrieve the trainers who would decide which dolphins would get a life sentence of captivity and which would lose their lives. Last season, two were taken, their survival, unknown. During a recent visit to the Taiji Whale Museum, one striped dolphin could be seen in the tank with Angel, an albino bottlenose dolphin, swimming in endless circles. A promotional video for Taiji on display at the visitor center states that the Taiji Whale Museum is the only facility in the world that has captive striped dolphins. Perhaps, attempts are being made to gather every species possible for the planned facility in Moriura bay, dubbed  “a world class research center,” according to the same promotional video. More likely, a captive breeding facility to sell dolphins around the world for human entertainment is being planned. A skiff arrived with two padded compartments for the small, striped dolphins, and, just like last year, two dolphins were carted towards the sea pens in Moriura bay. 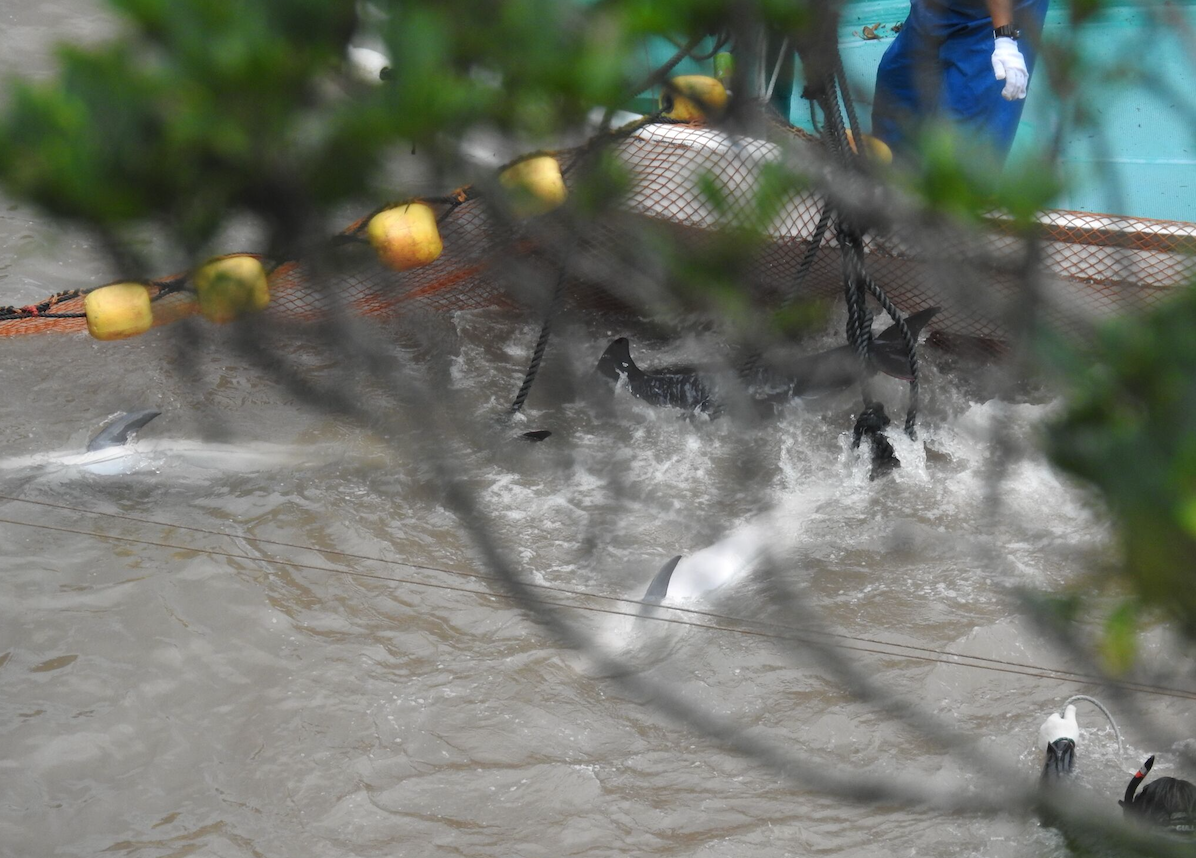 The rest of the dolphins were getting increasingly agitated by their confinement. Striped dolphins are a deep water species, rarely found near the coastline. As the hunters began to push them closer and closer to the rocky beach covered by a series of tarps, chaos ensued. Dolphins were panicking and getting caught in the nets, helplessly thrashing in terror and struggling to breathe. The hunters took no notice of them for what seemed like an eternity. Blood could be seen in the water where the dolphins struggled as the cords of the nets cut into the thrashing dolphins. The dolphins struggled and struggled and then a few went belly up, appearing to drown. At one point, a hunter, who was at least 25 feet away from the struggling dolphins, began to try to free the mammals by grabbing the nets and waving his end up and down. He was unsuccessful. Finally, divers arrived to untangle the dolphins. Ropes were used to tie their flukes and drag them under the tarps where death awaited. One cannot begin to imagine the terror these sentient beings must have experienced as all around them their family members were being massacred

The blue water of the Cove began to turn red – a sickening red – as the dolphins were slaughtered. The sounds of panic and thrashing were loud and clear as the process continued. 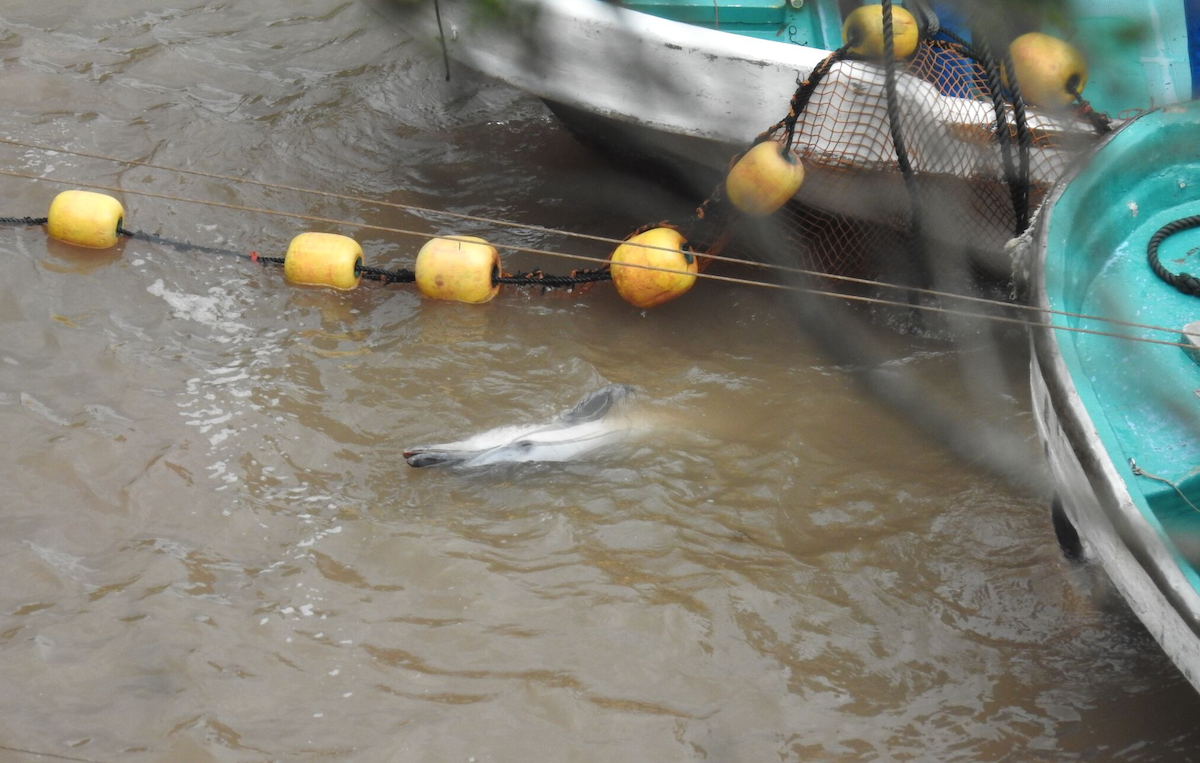 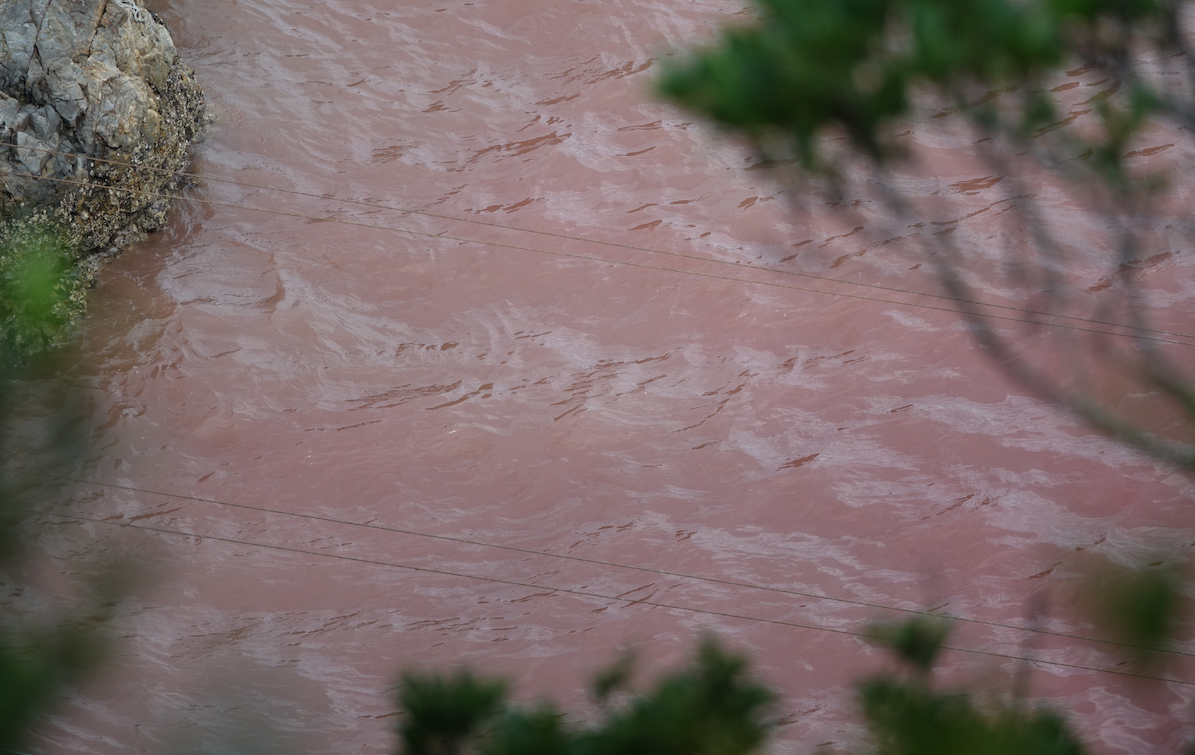 A bloody cove is all that’s left of a pod of wild striped dolphins. Credit: DolphinProject.com

Unfortunately, Japan’s animal welfare laws end at the water’s edge and marine animals are offered no protection from brutality. The suffering these dolphins endured is unimaginable. As the blood spread out from under the tarps, the sounds of dying dolphins ended. Their lives brutally ended. Approximately 40 dolphins were forced into the Cove, with two taken captive and about 38 slaughtered.

Shortly afterwards, the sickening thump of lifeless bodies could be heard as they were tossed into skiffs. Two skiffs with striped dolphin bodies emerged, covered with tarps, making their way to the Taiji butcher house. Hunters casually sat on them to prevent the tarps from blowing up and exposing the bodies. An entire family of dolphins were destroyed, removed from our ocean ecosystem where they are an integral part of keeping our oceans healthy.

When will we ever learn?