Terror in The Cove as Pilot Whales Slaughtered 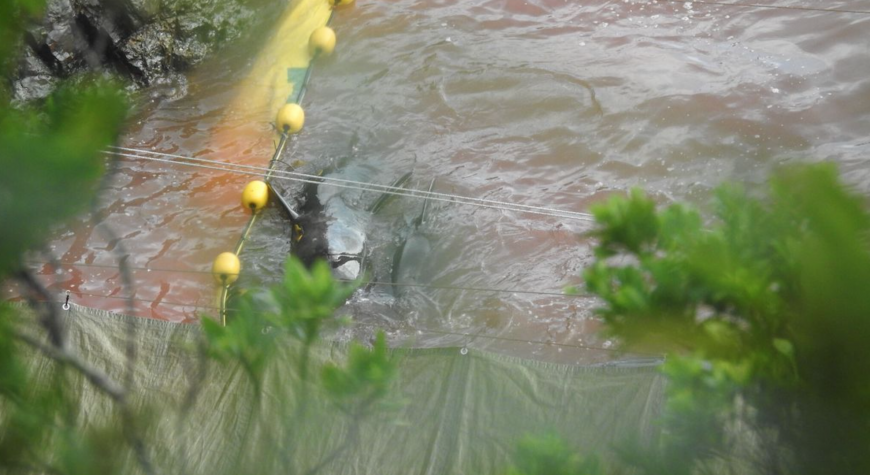 Taiji, Japan, 9-28-17: I cannot imagine having to swim in the blood of one’s dead pod members, while awaiting your own slaughter. Yet this was the reality – and the extreme cruelty – of the two-day pilot whale drive.

The morning of September 27 started out the same as so many others, with a parade of banger boats leaving the harbor in search of migrating dolphin pods. As I headed out to Tomoyozoki Point, I felt confident that this would be another blue cove day, where no dolphins are killed or taken captive. My confidence was soon shattered: at about 6:50 a.m., I saw the dreaded formation, meaning a pod of dolphins had been found. There wasn’t much of a struggle, instead, it was a steady formation. I could see the splash of dolphins, and knew it was time to relocate.

I moved to the top of Takababe hill, and saw the banger boats slowly and methodically pushing the pod of dolphins. There was no banging on the banger poles, just a slow push. The dolphins would stop, seemingly refusing to move, then the banger boats would bear down on them, forcing them to continue. As the pod got closer, my heart dropped as I saw the distinctive black hooked dorsal fins, characteristic of pilot whales. Having witnessed some horrific pilot whale slaughters, I dreaded the thought of another. 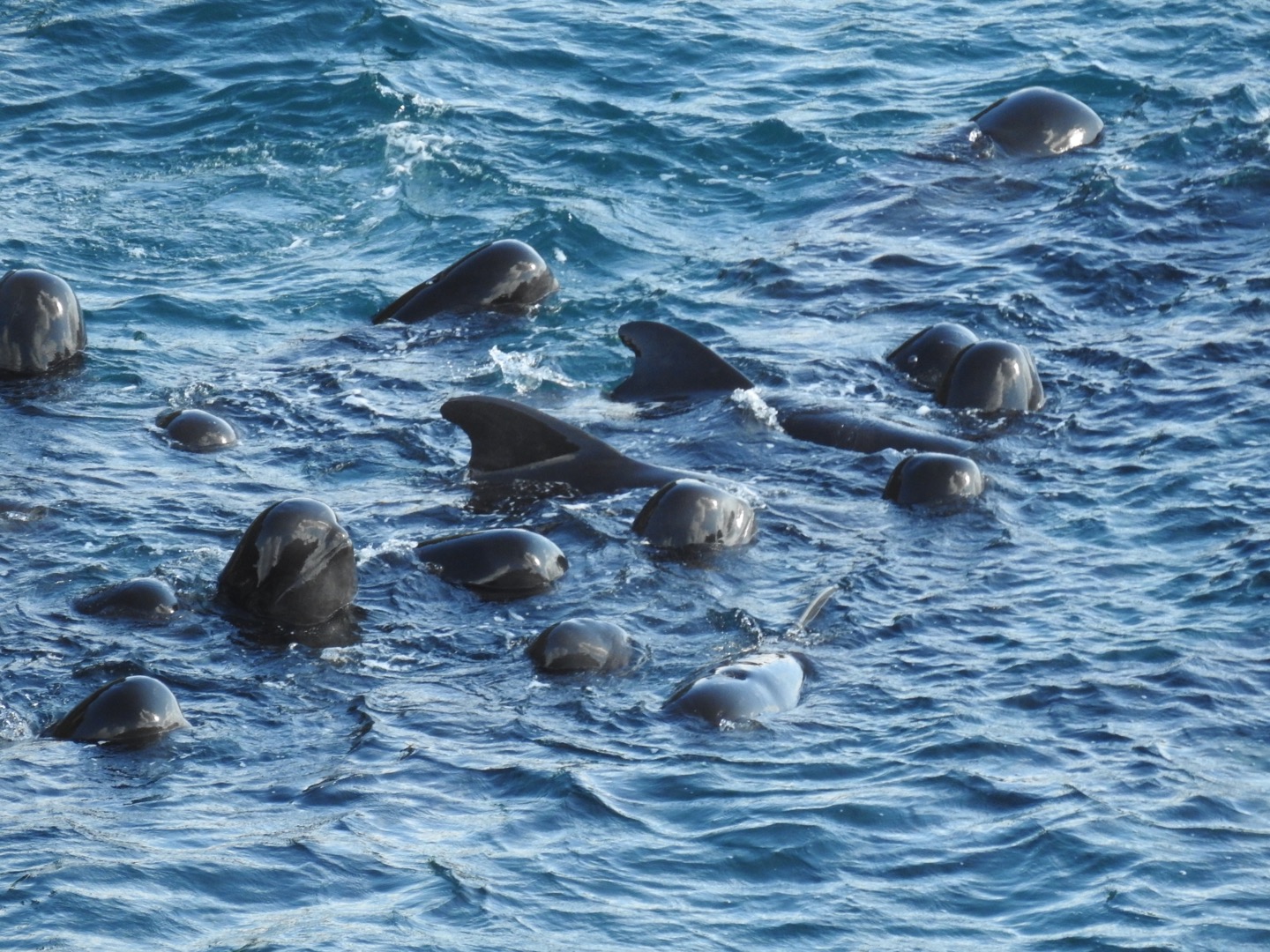 A family pod of pilot whales after being driven into the cove, Taiji, Japan. Credit: DolphinProject.com

By 8:00 a.m. the net was pulled across the cove behind these beautiful mammals, and their fate was sealed. When the dolphin hunters left, I stayed. For over three hours, I watched as stress began to manifest in the dolphins, their movements restless, filled with tail slapping, splashing and spy hopping.

Pilot whales have some of the tightest social bonds among dolphins, and it was very evident. The pod was packed tightly together, seeking comfort from one another. Cries from stressed pilot whales could be heard. Later, the skies turned gray and it began to rain. It was clear the hunters were leaving this family overnight. Floodlights were turned on, and police stayed on guard as the pilot whales moved to the very outer edges of the nets. The dolphins’ confusion and fear over not knowing what was happening broke my heart. However, being a popular species for their meat, I knew what their future held.

The next morning, in the darkness, I climbed the stairs of Takababe hill. Moments later, as the sun began to rise, the familiar sound of skiffs approaching the cove could be heard. Preparations for slaughter were made quickly, with tarps used to hide the killing pulled out and over the killing beach. Divers jumped into the water, and skiffs were turned around so they could use the engines to terrorize the pilot whales, and move them towards the beach. 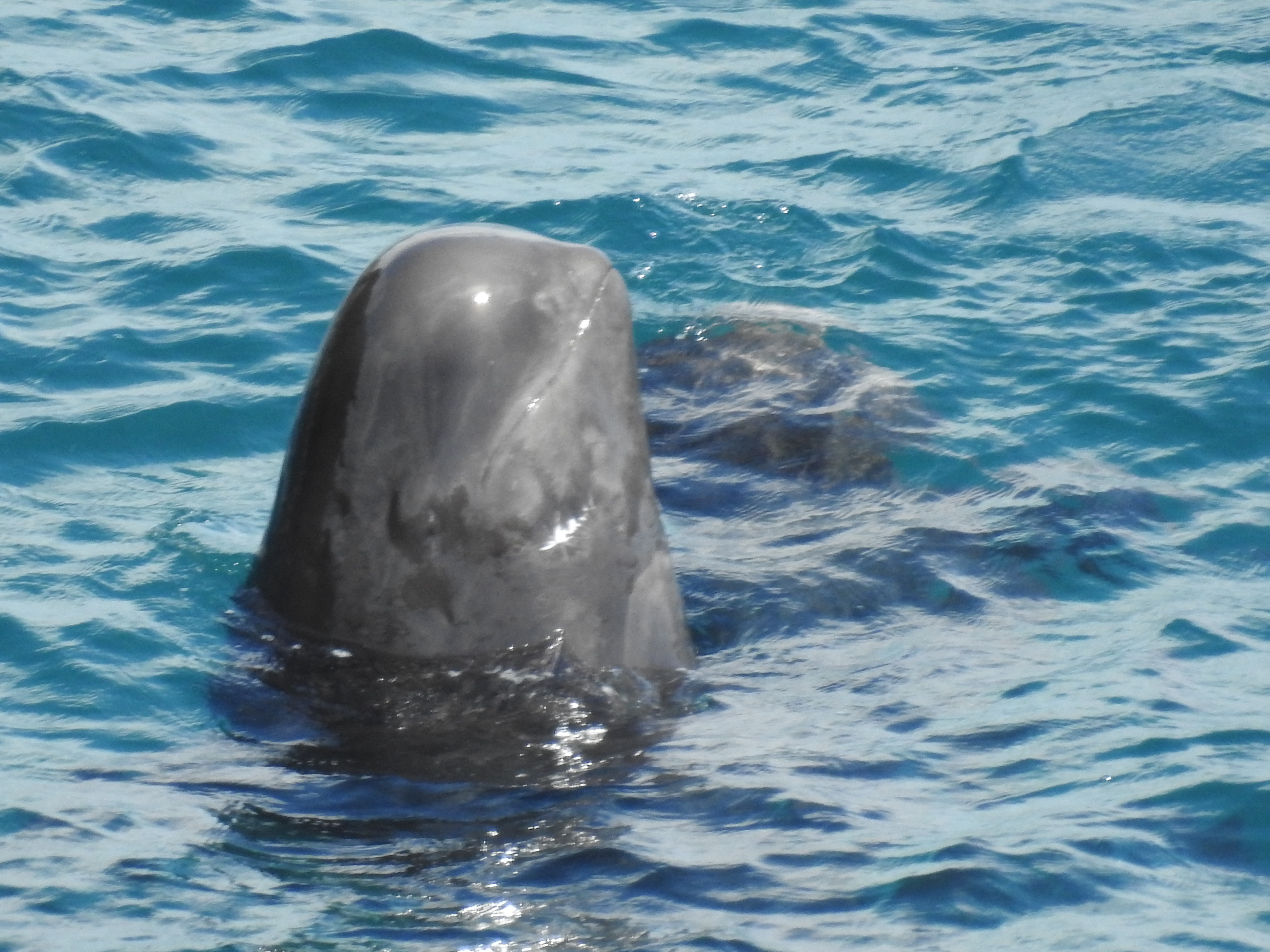 Pilot whales after being driven into the cove, Taiji, Japan. Credit: DolphinProject.com

The hunters pushed the entire pod into the killing area, choosing the larger adults to be pushed under the tarps and slaughtered. The pilot whales began to panic, thrashing against the yellow tarps and rocks. There is a space between the net and the rocks, (on the other side of the net) that pilot whales always seem to find. I struggle to find the right words to describe the terror and suffering these animals endured.  Their absolute panic was blatantly evident as they thrashed in the shallow water, and up against the rocks. I watched in horror as one pilot whale got rolled up inside the tarp, struggling to breathe and free itself. Divers finally came over and untangled the petrified pilot whale. As this is a common occurrence, one which I’ve seen happen time and time again, I can’t understand why the dolphin hunters haven’t found a solution to this problem.

Once all the chosen victims were under the tarps, the killing commenced. While tarps may cover the actual killing, nothing can silence the sounds of dying dolphins. In this instance, the thrashing was quite loud as pilot whales struggled to take their last breaths while mercilessly having metal rods driven through their spinal cords. In the meantime, those not selected for slaughter were left in the killing area to witness the suffering and deaths of their family members, swimming in the blood of the fallen.

Dolphin hunters, at one point, were forced to push the survivors away from the killing area as these dolphins wanted to get nearer to their slaughtered family. As skiffs were turned around, a few were hit with their engines. But as no net was drawn to separate them from the killing area, slowly, they made their way back. When dolphin hunters began removing the bodies of the dead, the survivors watched this, too. Panic ensued once again, as pilot whales were seen thrashing against the rocks, and another dolphin became entangled in the tarp. Again, hunters pushed the survivors away from the killing area, and once more, engines seemed to run right into the pilots. I could see some with bloody injuries on their heads and dorsal fins. A tiny body floated lifelessly, likely succumbing to the stress of the drive.

As the hunters continued to remove bodies, the surviving pod members huddled together. Distress calls could be heard as they spy hopped and looked into the killing area. I saw them rubbing against each other, as if seeking comfort. And then the cove fell silent. 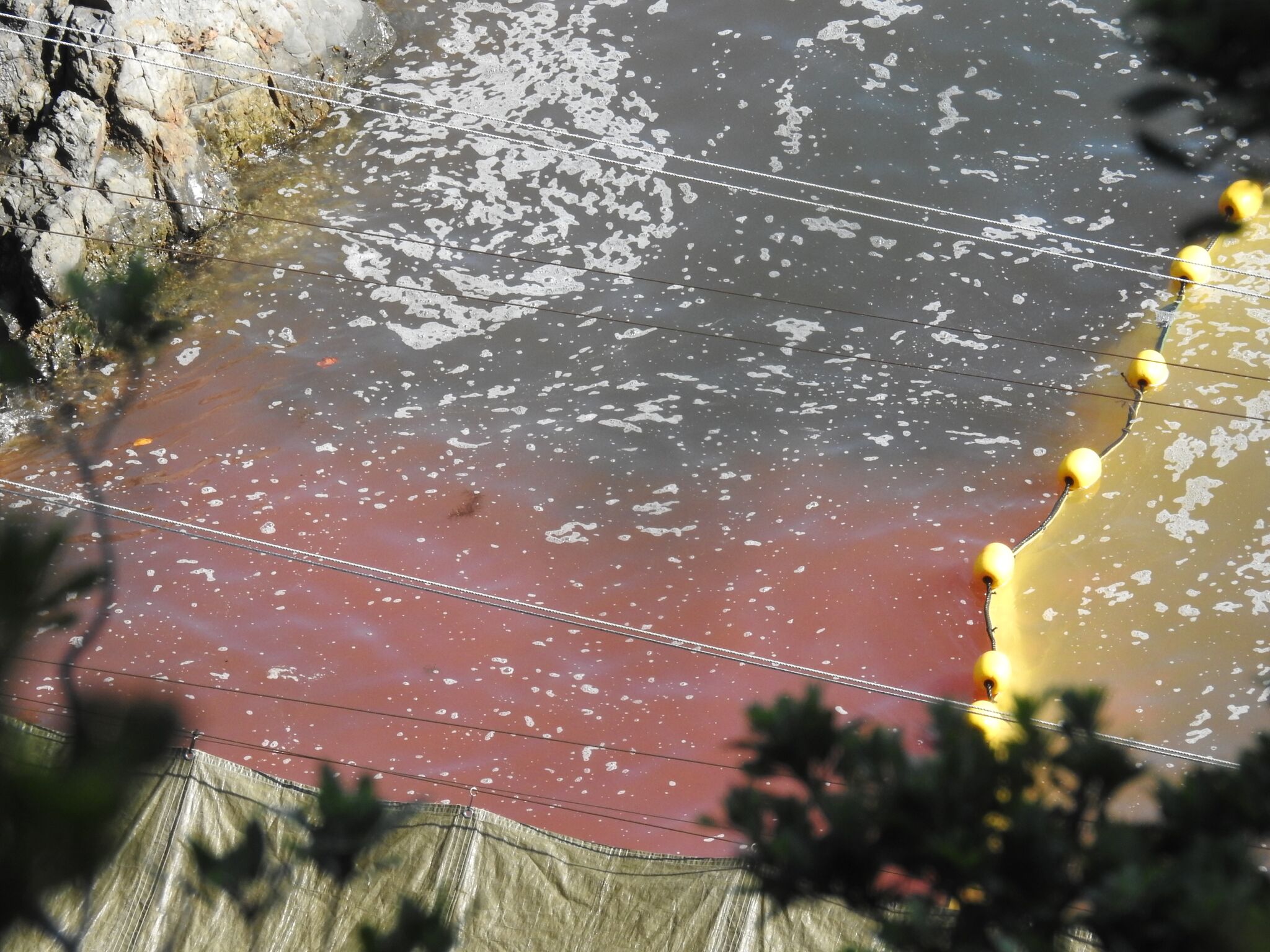 For two hours I waited, watching the survivors and wondering if they would be held for another night. Eventually, three skiffs approached, followed by several banger boats, indicating the dolphins would be released. Hunters struggled to get the mammals out of the cove. Finally, I saw something I had never seen. The pilot whales must have finally decided there was nothing else that could be done for their dead pod members, and their only choice was to leave. They bolted towards the open ocean, ‘porpoising’ through the water at great speeds. I could see their black bodies jumping out of the water and splashing as they re-entered the water. They made a final attempt to turn back towards the cove but their path was blocked by banger boats. The same wall of sound that was used to force them into the cove, was used to force them out.

In the end, 10 pilot whales were killed, with one ‘incidental’ death for a total of 11, and 24 dolphins were released. Despite the tragedy that had unfolded over these two days, as they headed to the open ocean, I was filled with hope. Not all the dolphins released were juveniles, and I hoped that one of the older, larger pilot whales would emerge as a leader, guiding the rest of the pod to safety and survival. Collectively, we need to educate others on their plight. As the demand for captive dolphins declines, so will their slaughters. Please continue to follow us on our social media as we bring the atrocities committed in Taiji to the rest of the world.