Taiji’s Payday As 26 Dolphins Stolen for “Life” in Captivity 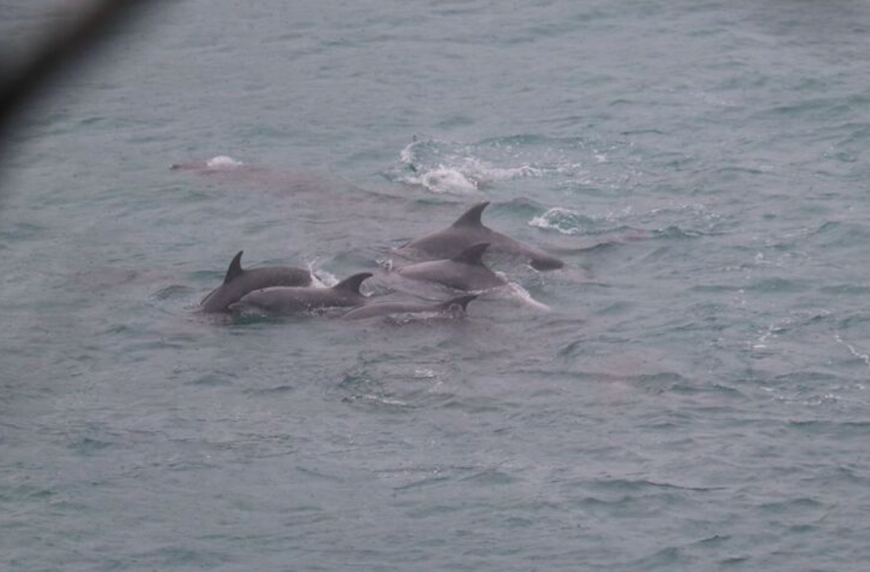 Taiji, Day 1, 9/23/16: After three consecutive blue cove days, hunting boats resumed their work. By 9:00 a.m. the rain returned, and along with it, the beginnings of a drive formation. With visibility near zero, Dolphin Project Cove Monitors moved to the seawall to document the hunt. Somehow, the boats were already there, too, their motivation and greed obvious as a pod of bottlenose dolphins were being pushed closer and closer to the cove.

Pod of terrified dolphins huddle together after being netted into The Cove.
Credit: DolphinProject.com

Despite the blinding rain, hunters netted approximately 40 bottlenose dolphins into the cove, and by 10:00 a.m., they were done. The dolphins were observed, along with a baby and presumably it’s mother, swimming tightly together. Back and forth they swam, and would be left alone without food or shelter until the following day.

Pod of bottlenose dolphins, including a mother and baby huddle together after being driven into The Cove.
Credit: DolphinProject.com

With a standing order for 150 wild-caught bottlenose dolphins, placed by marine parks and aquariums around the world, of which, 42 had already been captured, the incentive was obvious. Dolphin meat doesn’t command big dollars – it’s the live captures where the real money is made – up to $154,000 U.S. dollars per mammal.

Taiji, Day 2, 9/24/16: Again, as in previous captive selections, work commenced at 5:30 a.m. And, as Dolphin Project Cove Monitors have documented before, the selection process was brutal. Four skiffs containing divers and trainers worked in the blinding rain for a full seven hours, without break. The dolphins panicked, thrashed, splashed and vocalized nonstop as one by one, the mammals were taken from the pod, and dragged away in slings.

Payday for Taiji as 26 bottlenose dolphins taken for a “life” of captivity.
Credit: DolphinProject.com

Divers and fishermen separated the pod eight times, each time, choosing the dolphins they wanted for captivity. The chaos was horrific, the weather, unrelenting and while visibility was terrible, their cries were loud and heart wrenching.” ~ Daniela Moreno, Dolphin Project Cove Monitor.

About 1:30 p.m., it was over, the pod irrevocably damaged. Twenty-six dolphins were taken captive, with the remaining dolphins, approximately 15 in total, pushed out to sea. It was noted that there were green tags on the mammals’ dorsal fins, something our Cove Monitors have documented in past drives.

We first started seeing dolphins with tags attached to their dorsal fins in 2012. At the time, we were unsure whether they had been tagged in the cove, or if they were part of a research program. In 2014 and 2015, we attempted to contact universities which we were aware had been conducting tagging programs, but no one seemed to know anything about this.” ~ Tim Burns, Dolphin Project Coordinator

Dolphin Project later learned from our colleagues in Japan that hunters have been the ones putting the colored tags on the dolphins they release. This is to ensure they won’t drive in the same pods that have already been “sorted.” We were told this process of organizing captive hunts was something Taiji hunters learned – from SeaWorld. The connection between the captive dolphin industry and the dolphin slaughter couldn’t be clearer.

Continue to follow us on our social media for breaking news and live updates from #The Cove.