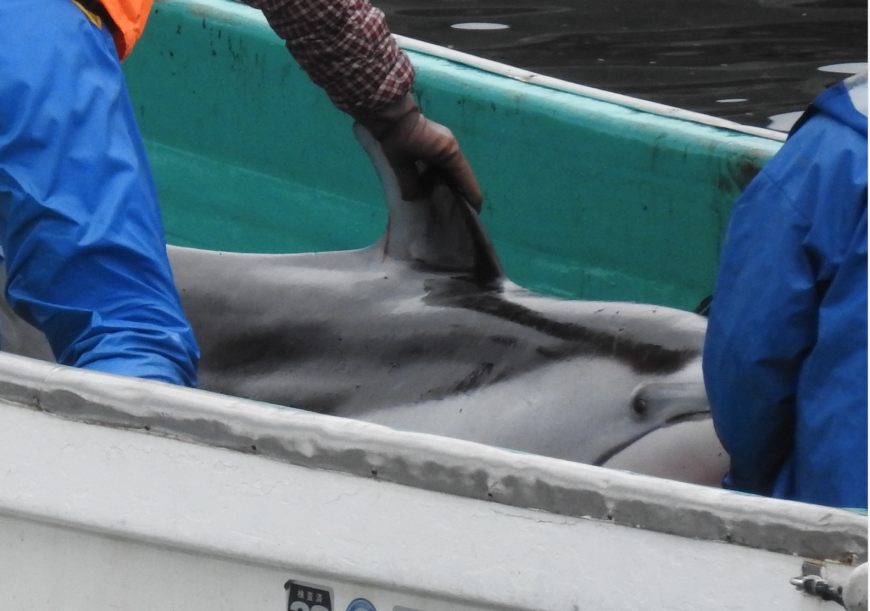 Taiji, 2-19-18: With only days left of the 2017/18 dolphin hunting season, Taiji’s hunters hit another payday with the season’s first capture of Pacific white-sided dolphins. It’s been a profitable couple of days as yesterday, eight bottlenose dolphins were driven into the cove after a chase of several hours. Five were taken captive and three were released.

Ironically, the only capture of Pacific white-sided dolphins last season took place exactly one year ago today, on February 19, 2017.

The banger boats went out at 6:30 a.m. and by 9:45 a.m. Dolphin Project Cove Monitors witnessed a drive in progress. The dolphins fought hard and to our relief, the pod broke away from the hunting boats. Sadly, less than one hour later, hunters had driven a small number of dolphins back into the harbor and four mammals were subsequently netted offshore.

Skiffs containing the familiar orange-colored attire of Taiji Whale Museum trainers approached the dolphins. A long process began as divers jumped into the water, attempting to herd the dolphins into the middle of the nets so the nets could be drawn tighter. Slap paddles were used and divers were seen slapping their arms on the water to scare the dolphins into submission.” ~ Cynthia Fernandez, Dolphin Project Cove Monitor

Groups of divers jumped onto each dolphin, wrestling the terrified mammals into skiffs. As we live streamed this brutality for the world to witness, dolphins were observed thrashing their tails in panic, their flukes becoming bloodied. Ultimately the dolphins were overpowered and once brought to the sea pens, were tossed into the enclosures like garbage.

The dolphin captivity issue is one of supply and demand: if demand increases for trained dolphins, whether to function as performers, interact in swim-with programs or otherwise serve to entertain, Taiji’s business of supplying dolphins to buyers throughout the world will flourish. And thus, the solution is equally simplistic: when people stop buying tickets to dolphin shows and swim-with programs, the industry will end.

ACT NOW: Take the Pledge to NOT Buy A Ticket to a Dolphin Show