Taiji: What Dolphinariums Don’t Want You To See

Home/Blog/Campaigns/Japan/Taiji: What Dolphinariums Don’t Want You To See 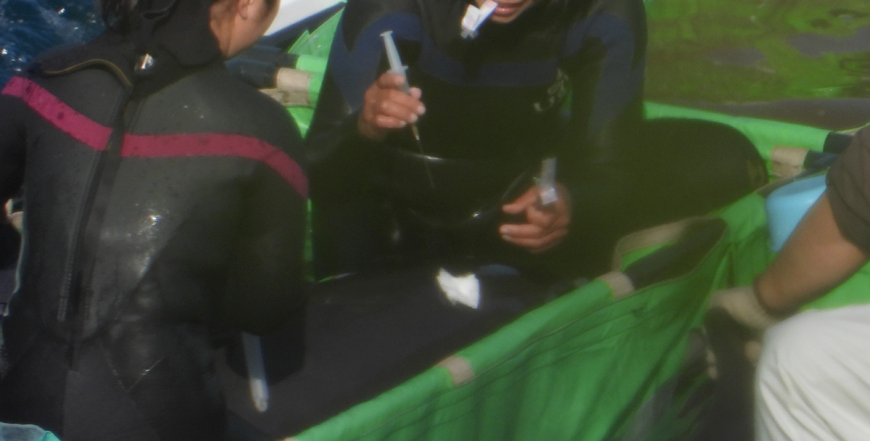 Taiji’s dolphin hunting fleet successfully drove pods of dolphins to the Cove four days this week. Captures were abundant as dolphin trainers and hunters worked hand in hand much of this time.

The week began with what we expected would be a blue cove day. On February 3, the hunting boats had spent several hours searching offshore waters and had begun to head back in. Just as the first few boats were about to enter the harbor they stopped, turned around and took off full speed towards the south. A pod of bottlenose dolphins had been sighted – an opportunity for incredible profit via captive exploitation. Bottlenose dolphins are the most commonly found dolphin species in marine parks and aquariums, and are in high demand by such facilities.

After the hunters swiftly and aggressively herded the small bottlenose pod into the Cove, dolphin trainers assembled and launched a hasty captive selection process. All six wild bottlenose dolphins in the group were taken for captivity, and no lives were spared. 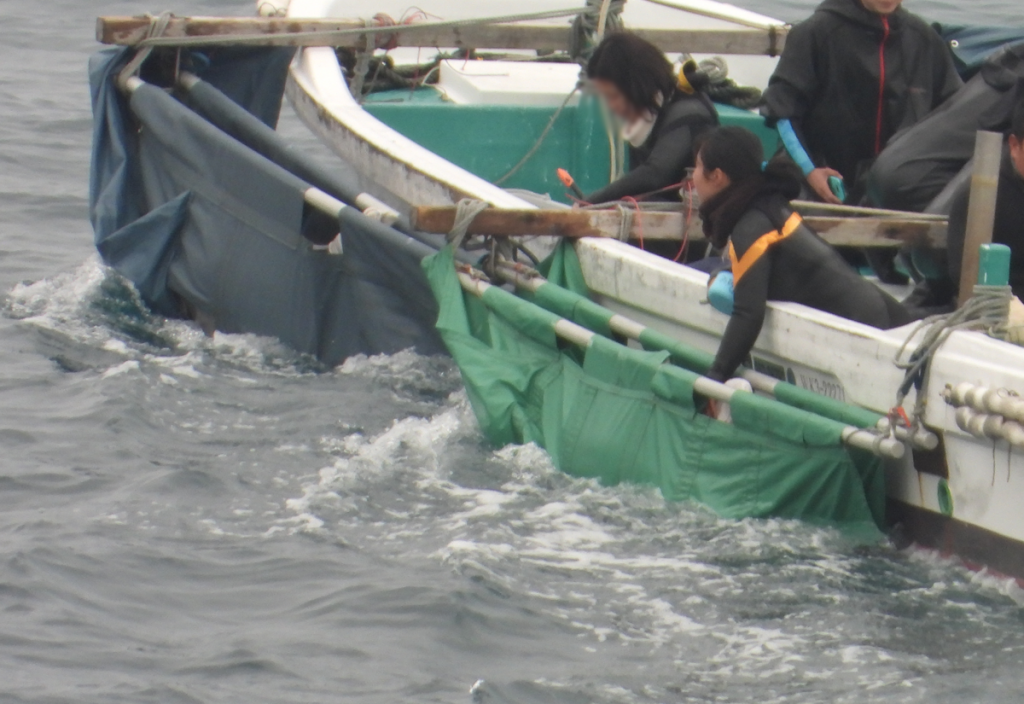 Some of the dolphins were placed in the harbor’s sea pens. Up until then, the only boundaries they knew were the sea floor and the sea’s surface. For the first time in their lives, they were confined with barriers on all sides, and we observed them swimming around erratically. 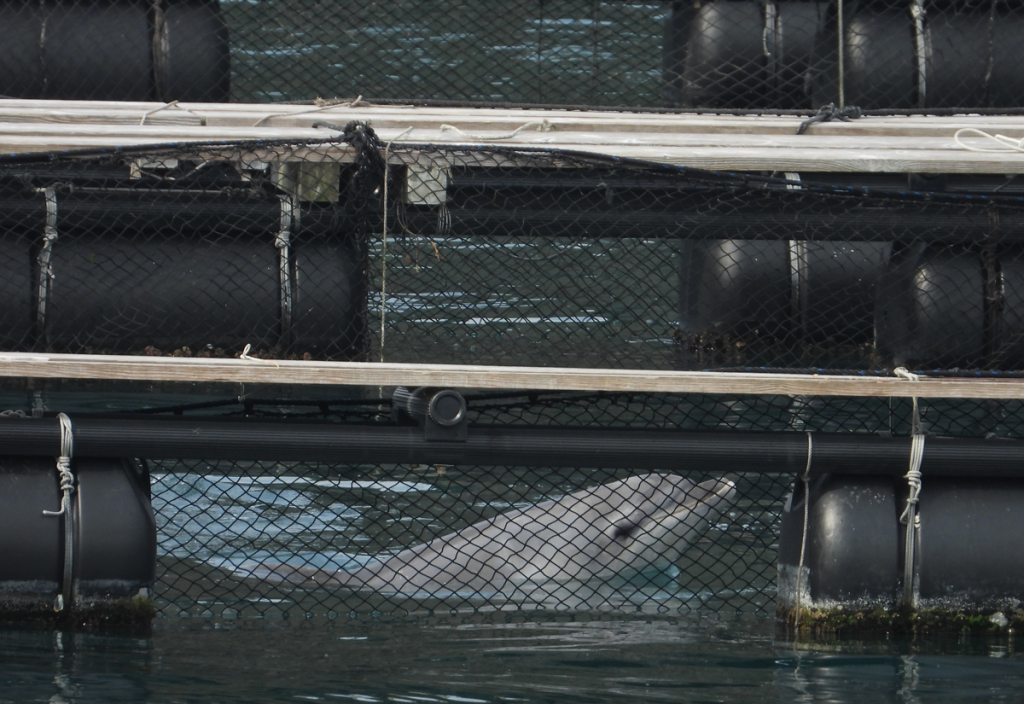 February 4 provided yet another high profit opportunity for Taiji’s dolphin hunting operation, as the hunters located a pod of pantropical spotted dolphins. As a species that tends to range in waters 300-1000 feet deep, they resisted coming closer to shore. The hunters struggled to drive them into shallower waters. Unfortunately the hunters aboard their fleet of banger boats and skiffs did not give up, and eventually, the dolphins tired and were trapped in the Cove. 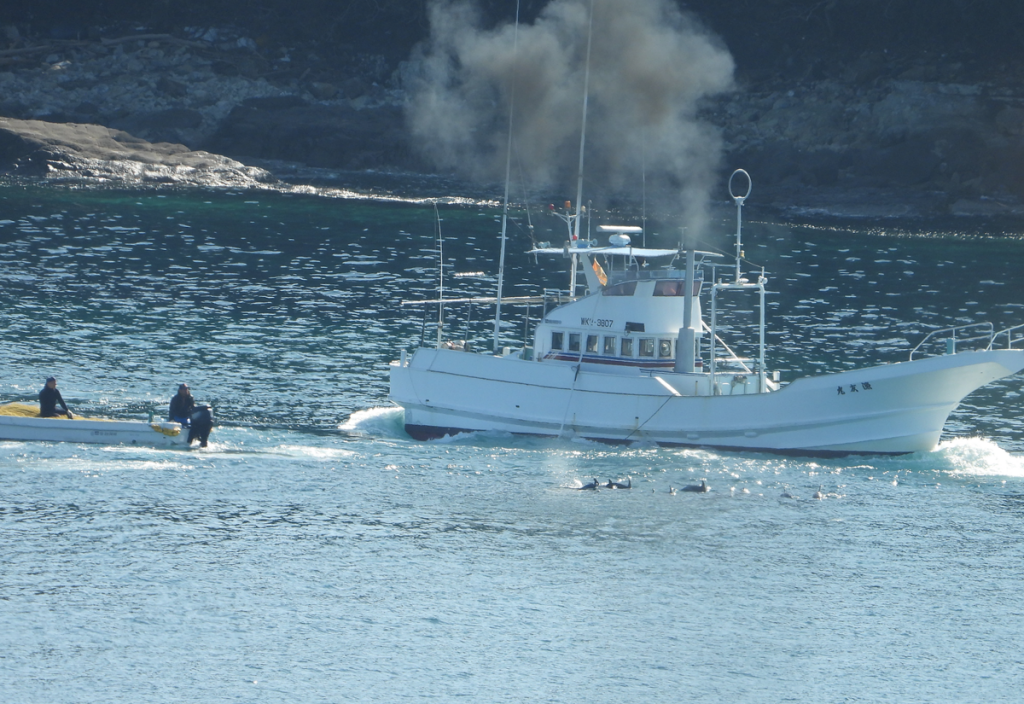 Among the pod were several mother and calf pairs. Pantropical spotted dolphins are in part named for their spots. These dolphins do not have spots when they are born, but accumulate them as they age and eventually become covered with overlapping spot patterns. We sighted several spotted and unspotted dolphins, each swimming alongside an adult (presumably their mothers). The dolphins appeared visibly distressed, swimming tightly together, parallel to one another and periodically spyhopping. At times they even moved vertically with their tails up in the air, as if searching for an escape to dive down to. 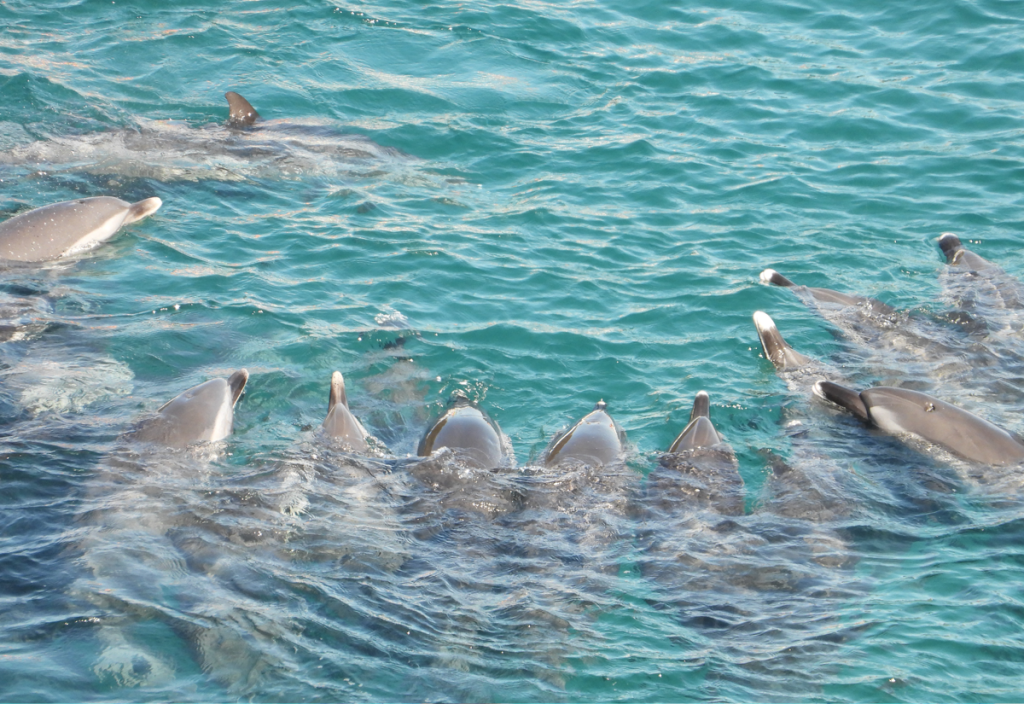 Wild pantropical spotted dolphins huddle together in apparent distress as they are trapped in the Cove | Credit: DolphinProject.com

A large group of dolphin trainers arrived in multiple skiffs. Shortly after, an extremely drawn-out captive selection process commenced. Over the course of several hours, 20 pantropical spotted dolphins were taken from their family group to be used for display and monetary profit. One of the trainers was visibly preparing several needles. We documented this trainer injecting the freshly-captured dolphins with an unknown substance. Many of the crates that the captives were taken in came back containing bloody water. Dolphins do not volunteer to go into captivity, and it’s not uncommon for injuries to occur during the process of being taken away from their pod. 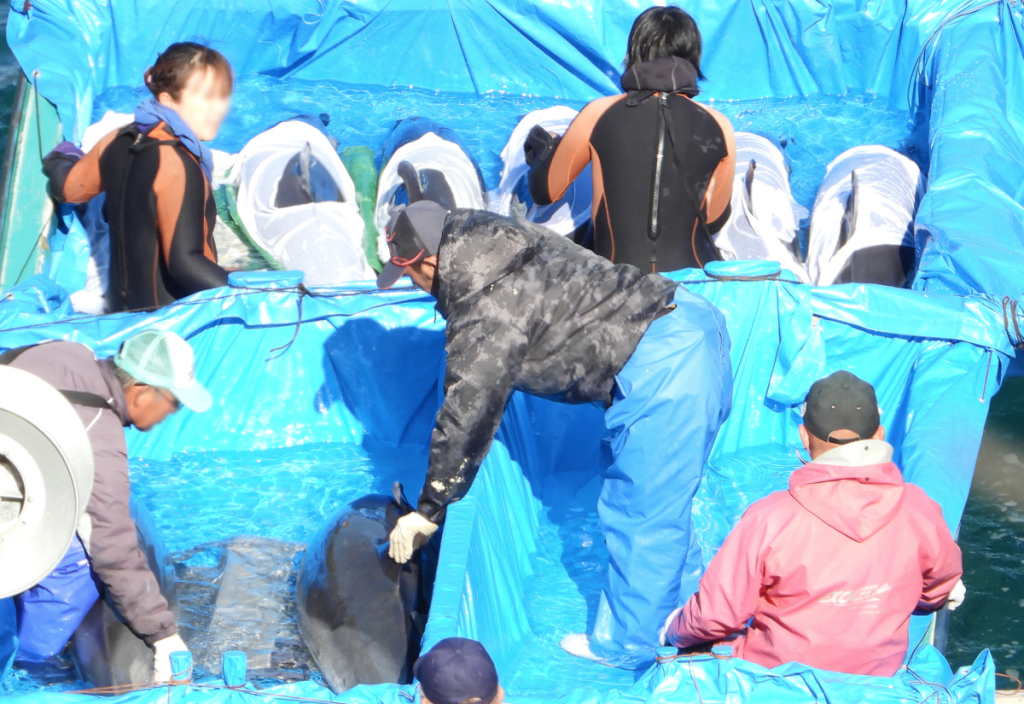 Eight pantropical spotted dolphins are packed together in a skiff, taken for captive display. | Credit: DolphinProject.com 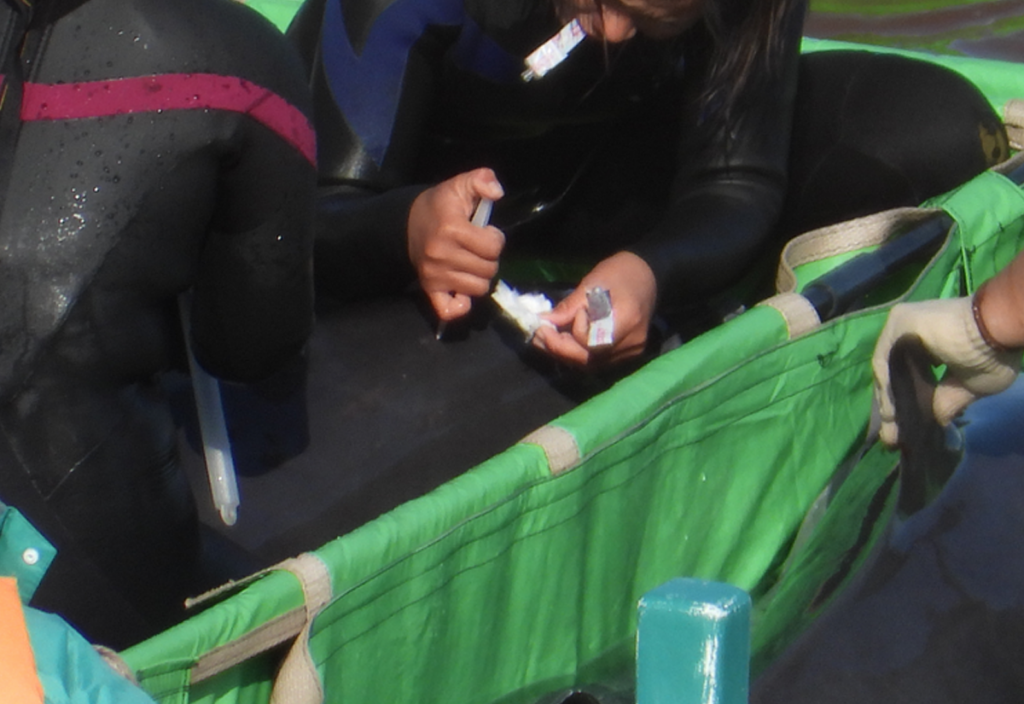 The remaining pod of an estimated 15 pantropical spotted dolphins were put into crates and taken out to sea to be dumped. Several of the dolphins were thrashing, and one had several cuts on its flukes. Our team observed the skiffs go out to sea, just past one of the lookout points and tossed into the water over the side of the skiffs. Dolphins are incredibly intelligent, sensitive, and socially complex marine mammals. Having intense bonds with other members of their pod, the suffering associated with being separated from one another in a captive selection process (or slaughter) is immeasurable. It is unknown whether all of the remaining dolphins will survive after enduring an incredible amount of stress and losing the greater part of their pod. 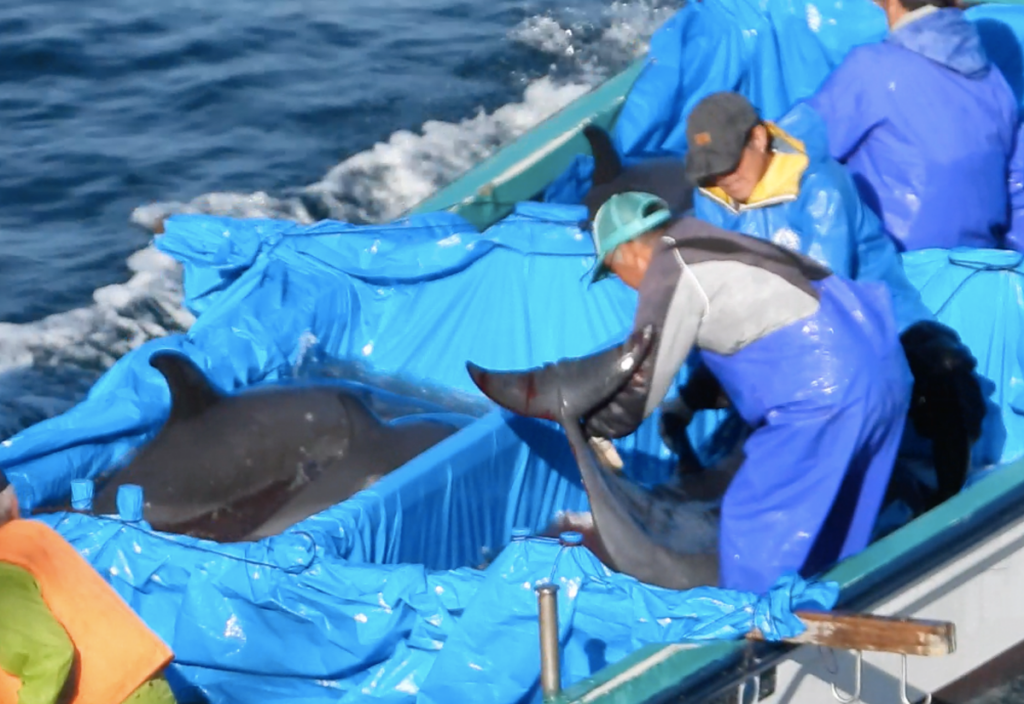 Hunters appear to subdue remaining pantropical spotted dolphins as they are being taken out to sea to be dumped. | DolphinProject.com

The next day, luck was on the dolphins’ side. The hunters departed the harbor and spent several hours in the early morning searching for dolphins, but in the end were unsuccessful. Sadly, this luck was short-lived. On February 6, the Cove ran red. The dolphin hunting boats quickly and mercilessly drove the pod of striped dolphins into the Cove and very quickly extinguished their lives. Using the cover of excessive tarps and strategically placed nets, the hunters put a notable effort into hiding this swift and bloody slaughter. 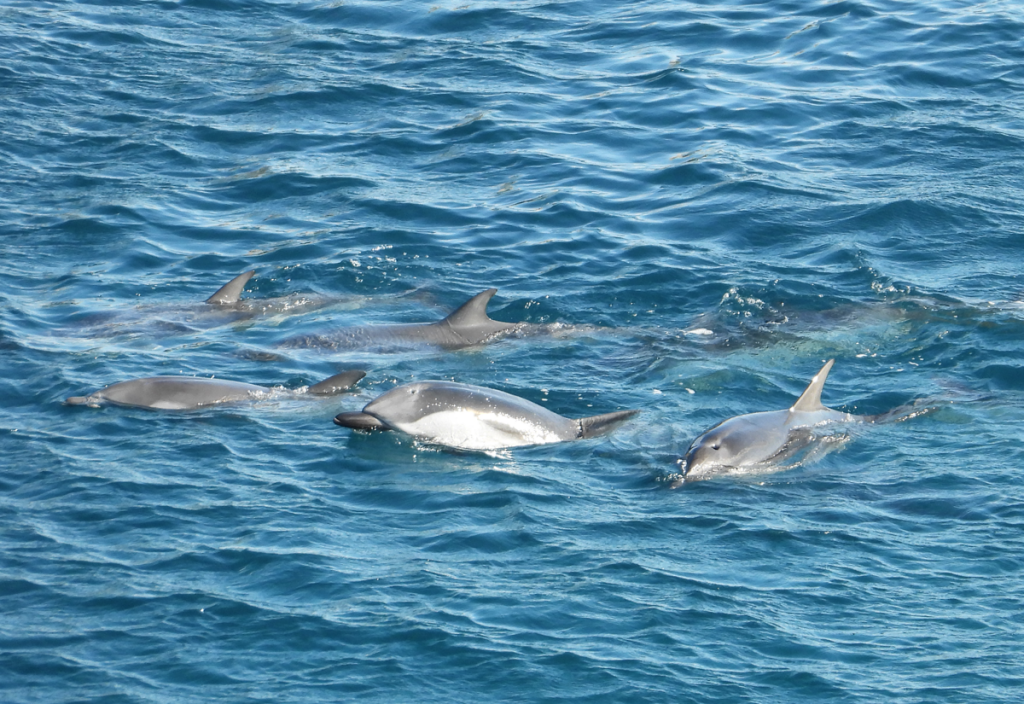 The final moments of this pod, as they are chased into the Cove. | Credit: DolphinProject.com 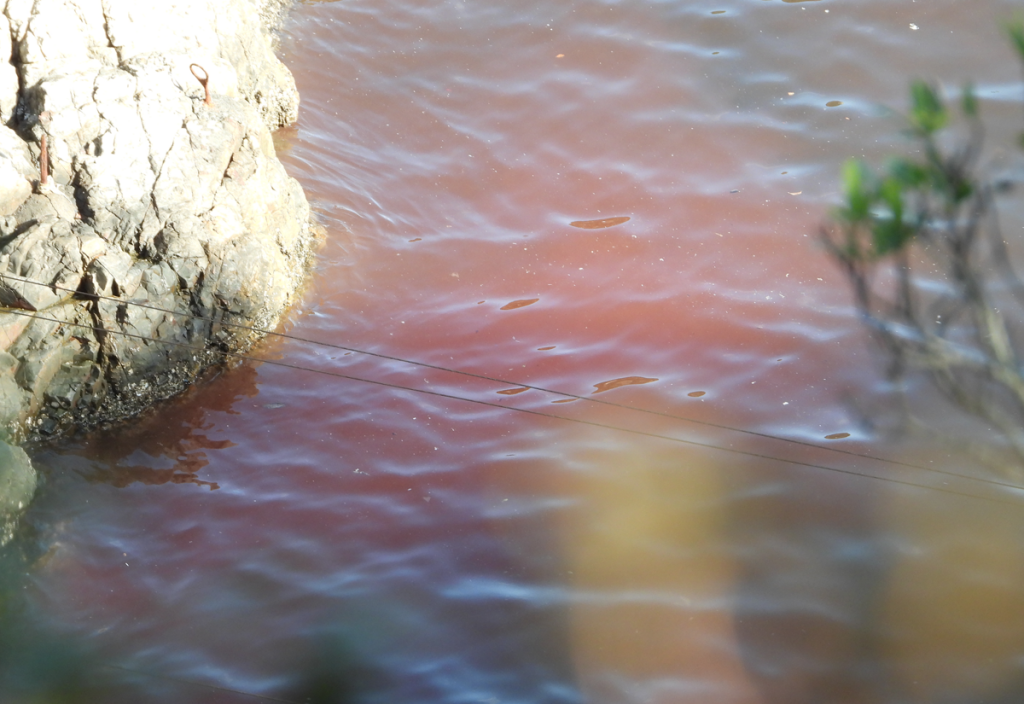 The Cove ran red with the blood of the striped dolphin pod after the slaughter. | Credit: DolphinProject.

As a new day dawned after this slaughter, the hunting boats located another pod of dolphins several miles offshore. They followed the pod for at least 45 minutes before successfully getting into drive formation. The boats chased the dolphins for nearly four hours, but the dolphins fought hard to get away. In the early afternoon, the hunters finally gave up, broke out of formation and headed back to the harbor as the dolphins successfully escaped. Safety for wild dolphins persisted into the next day when the hunters were unsuccessful at locating a pod.

With just one day left in the week, we hoped the blue cove streak would continue, but unfortunately that was not the case. About two hours after departing the harbor on February 9, the dolphin hunting fleet was sighted in drive formation on the horizon. They drove the pod with speed from several miles offshore, all the way to the Cove. 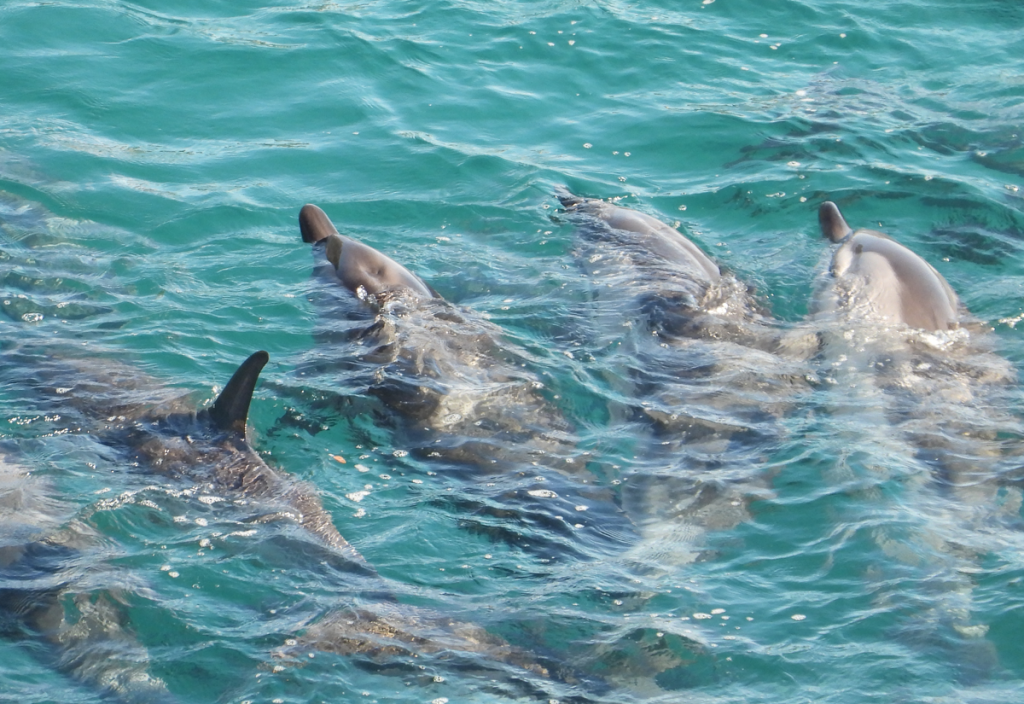 Dolphin trainers quickly gathered alongside dolphin hunters for a captive selection process, and at the same time a group of Japanese activists mobilized. With police and the coast guard overseeing the hunt, no direct interference is ever permitted. Several Japanese activists assembled alongside our Cove Monitor team on the lookout above the killing Cove, and a few assembled at the public park just a short way away. The activists began to speak out at the hunters and trainers – some of using megaphones – and pleaded that they stop killing and capturing dolphins, and to set the dolphins free. The powerful and moving words of the activists reverberated throughout the Cove and could be clearly heard on our livestream as the pod endured a captive selection and slaughter.

The dolphin trainers took three striped dolphins for captive display. As the departed the Cove, they were visibly taking measurements of their newly-acquired “commodities.” Soon after, the hunters quickly extinguished the remaining pod and carried out the lifeless bodies of the dolphins, covered with a number of tarps. 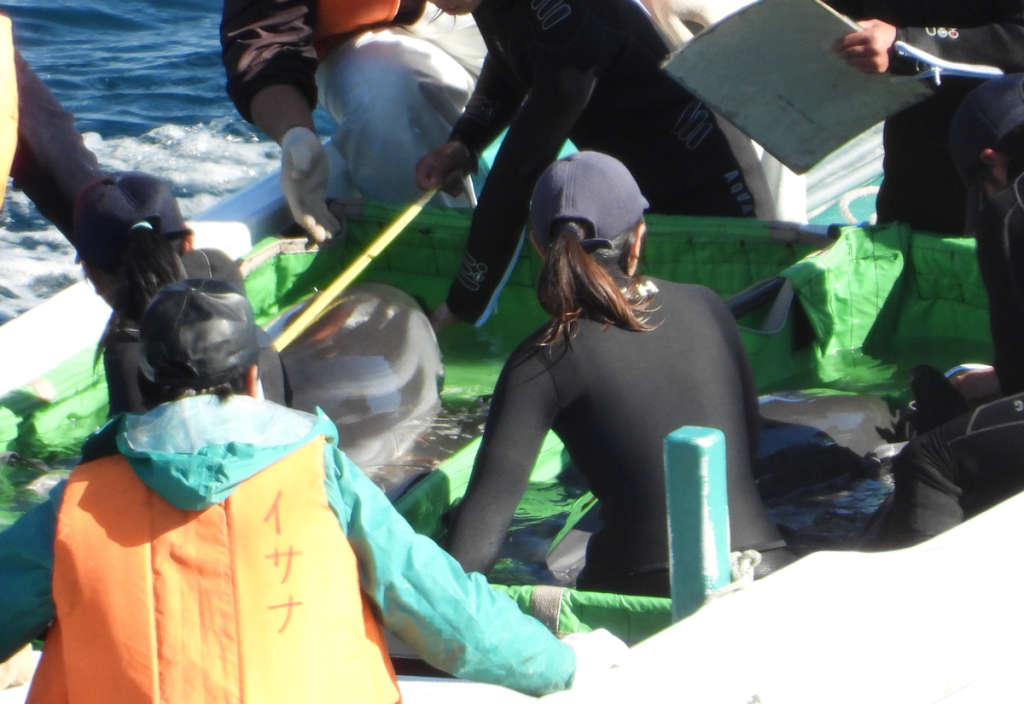 The persistent pleas of the Japanese activists are sure not to be forgotten. Grassroots activism is a vital aspect of igniting change. Word of mouth is an extremely powerful tool, especially as Japanese people spread the word about Taiji’s dolphin hunts and dolphin captivity within Japan. Japanese culture is more of a collectivist culture than Western culture is, which makes it not so easy to speak out or step out of the norm. We commend these activists for their bravery and dedication, and hope that this movement will continue to grow! 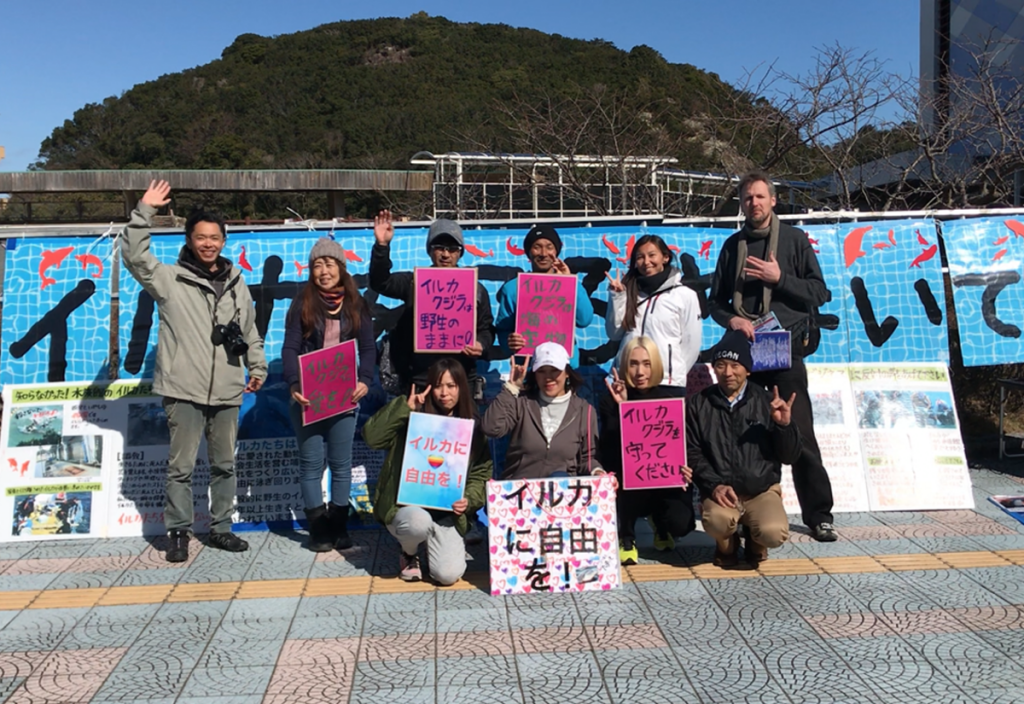 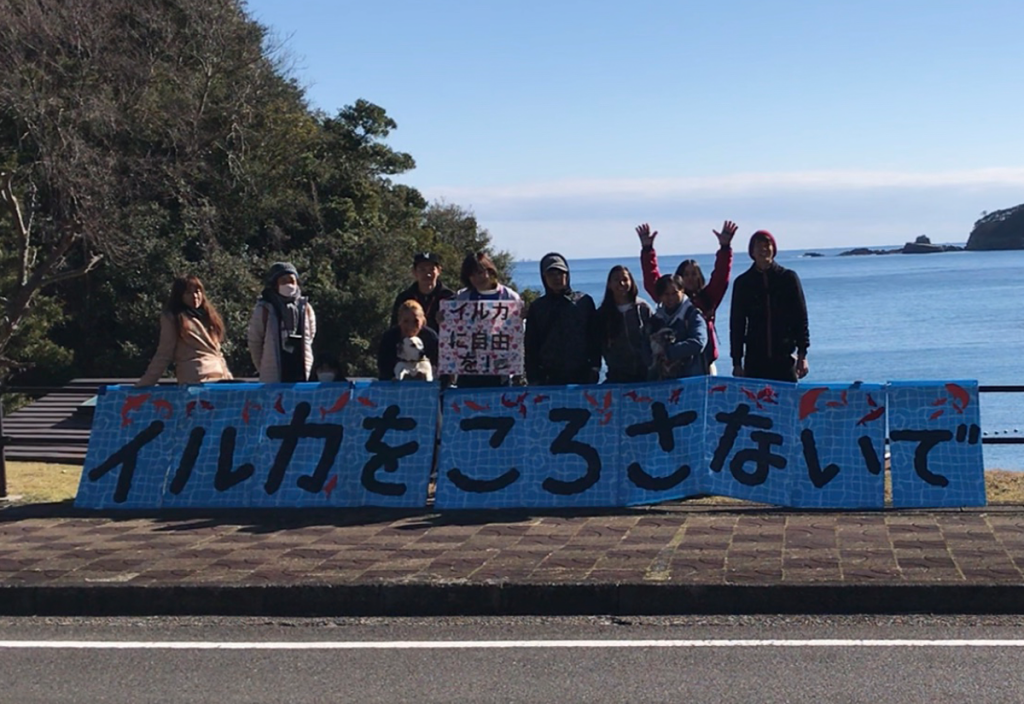 Japanese activists at the Cove with a sign that says “Don’t kill dolphins.” | Credit: DolphinProject.com

If it were not for the demand from the captivity industry, these dolphin hunts would not be happening. It’s up to people everywhere to take action and tell these dolphins’ stories to change the way the world sees dolphin captivity!