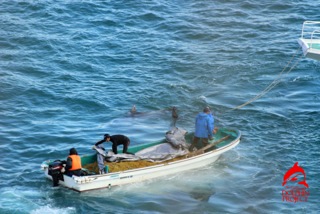 I’ve been in Taiji since last week, working closely with Sakura and other Japanese activists who are visiting.  My friend Satoshi, head of Flippers Japan, is coming to visit here soon.

The good news is that there is a growing movement of Japanese animal rights activists who agree with us that the dolphin hunts in Taiji are cruel and should end.  They are conducting demonstrations in Tokyo and coming to Taiji to see the dolphin hunts for themselves.

Sakura has been posting updates from Taiji for the past three months in both Japanese and English (including on our Dolphin Project Facebook Page).  She is really dedicated, talking to every Japanese tourist who comes to visit Taiji about the dolphin hunts.  We wish we could clone her!

Risso’s dolphins in the Cove from a drive hunt on Friday in Taiji.  These beautiful animals were all killed.  Photo by Sakura Araki.

All this activity in Japan gives me hope for the future.  I need hope right now.  The dolphin hunts here are still very ghastly and would make anyone sick.

Dead Risso’s dolphins being transferred from the killing grounds of the Cove to the slaughterhouse in Taiji harbor.  Photo by Sakura Araki.

Some other good news:  the dolphin killers have announced they will be stopping hunts on their annual end-of-year break, from Dec. 24th through January 4th.  So at least some dolphins and whales will get a respite for the holidays.

I hope you have a wonderful holiday season, too.  We cannot give up our efforts to stop the dolphin hunts here in Taiji and throughout Japan.   We should draw strength from our progress so far – we have accomplished quite a bit since 2003 when I first saw the dolphin hunts in Taiji for myself.

The Dolphin Project Team and I will continue the effort for as long as it takes.  I can guarantee to you that we will not give up!

If you would like to help us with a donation, that would be great!

If you are helping us with your volunteer work and spreading the word, my deepest thanks.

Take care and happy holidays to you and yours from all of us at the Dolphin Project!
Photos of recent Risso’s dolphin hunt in Taiji by Sakura Araki.