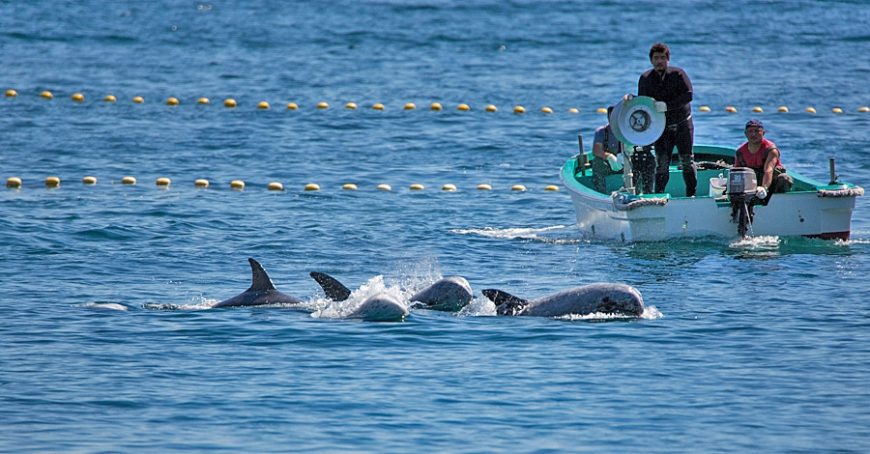 My seventh trip to Japan started with a long stretch of blue-cove days, when the hunters went out but came back from the ocean without any dolphins. The good feeling inside started to fade when the dolphin hunters of Taiji found a pod of Rissos on the 14th day of September and drove them very close to Taiji, but the dolphins were not going to give up. Taiji fishermen gave up in a very interesting way – they encircled the pod in a circle and drove their boats for a minute, then just leaving the pod and came into port. We were glad the dolphins escaped their certain fate – but our hearts were heavy. Pods that have escaped in the past have been hunted for hours and are very tired, so they tend to stay around in the area and build up strength to continue.

Rissos are a unique dolphin species, as they have a similar body type as short finned pilot whales (which are also a dolphin species) – they have a beakless head shape, but it is noticeably flat, unlike a pilot whale head (melon). All dolphin species have very tight knit family structures, and Rissos are no different, but they have one unique trait – they rake each other with their teeth creating white lines on their grey bodies. Older Rissos can appear almost silver in color, but their dorsal fins and flukes will appear black.

Rissos, like a few other dolphin species, will attempt to hide and stay under the surface to escape their predators – in this case the hunters. The hunters had a difficult time trying to push the pod closer to Taiji – as the depth changes dramatically, and the pod would disappear for several minutes at a time – and reappear sometimes behind the boats. I was able to clock over 10 minutes while the pod was eluding and holding their breath. Dolphins breathe air just like we do – so they need to come up for air, which means the hunters just have to sit and wait…

Red cove – a dolphin slaughter – happened on the 16th of September, when the first portion of a Rissos pod were killed and taken to butcher for consumption. Knowing I had witnessed a far larger number of Rissos being hunted, I knew there could be more days of Rissos hunts – so I was bracing for the worst.

September 17th – a pod was found very quickly just outside Taiji harbor. Other Cove Monitors and I have witnessed pod members stay with their fallen family even though the nets were removed. I imagine the dolphin family unit being very strong, and when a portion of the pod vanishes – they seem to stay in the area where they last heard their family. On this 2nd day with Rissos in the killing cove – I noticed a few dolphins were placed in slings alongside a hunting boat and taken out to sea. Dolphins not large enough to yield enough meat for sale are sometimes dumped out at sea so as to not be counted in the official quota. We have no information whether the dolphins taken out to sea were alive or dead, but either way without their family structure they most certainly will have a difficult life (if still alive). Many times dolphins will be found beached on rocks near Taiji after these dumping events. September 18th – Yet more Rissos were hunted into Taiji! First just a formation of four hunting boats, which was not enough to drive the pod in, but enough to hold and watch the Rissos. As the eight remaining hunting boats arrived, the drive towards the Cove ensued. Even more difficult than the last two days – these pod members were fighting extremely hard to keep freedom. At one point they were near the cove, but immediately turned back around and escaped. It took an extra net to create a smaller region for the hunters to squeeze the pod closer to the Cove. As they kept making the netted area smaller – the pod inched closer to their fate. Eventually the pod could not fight anymore and were sadly located in a place of dolphin nightmares! One Rissos dolphin was so tired it was just bobbing in the water – netted in the killing area – without any strength to fight any longer. The Dolphin Project Cove Monitor team will stay on the ground reporting & LIVEstreaming daily throughout the dolphin hunting season.

Ric O’Barry’s Dolphin Project needs more dedicated people on the ground like Terran Baylor. Learn how you can help us on the frontline as a Cove Monitor here.