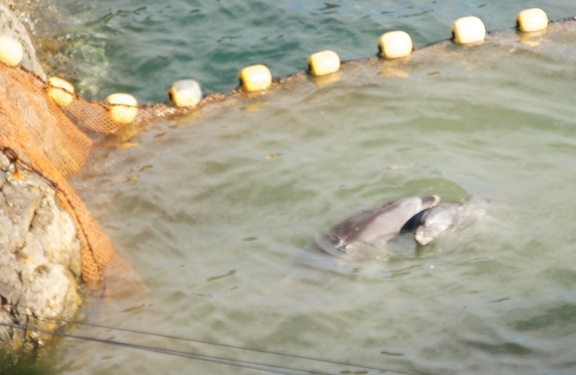 I wish I could say that we made more progress this year in shutting down the dolphin hunts, but the slaughter went on and on.

On Sunday, February 24th, the dolphin hunters of Taiji began taking down their stupid barriers (erected tarps with a great deal of complicated roping and scaffolding), which are simply put up to prevent our cameras from recording the deaths of hundreds of dolphins during the hunting season.

The dolphin hunting boats went out the day after the beginning of the season on September 1st, 2012, with the season running through the end of March.  While there are not likely to be any more drive hunts for dolphins this season, the hunters do harpoon pilot whales up to their quota while out fishing for tuna through April at least.

The number of dolphins killed last season (2011-12) was probably 800-840 (there are several different estimates).
This season, the estimates are slightly below 900.  Also, hunters killed a lot of pilot whales and Risso’s dolphins, which are much larger than the other dolphin species, which suggests that much more meat was brought in this year.

Ryo, Ric and Sakura at the Taiji overlook for the ocean, above the harbor.  Photo by Ric O’Barry.

But we still understand the dolphin hunters are having trouble selling that tainted meat.  They released more than three hundred dolphins this year, including pilot whales and bottlenose dolphins, which is an unprecedented number.  Our contacts in Taiji told us that a release of pilot whales early in the season was due to the freezers in the slaughterhouse being full, which again suggests that the meat is not selling like it has in the past.  The Taiji dolphin hunters have a quota of 2,089 this year – yet they again only killed about half of that amount.

Also unprecedented was the huge catch of dolphins for captivity, estimated by CetaBase as 247.  Last year, we were startled when the hunters caught 50 dolphins for captivity.  We are not sure what this means, although we know there are a lot of aquariums seeking new dolphins in China, Japan and the Middle East.

Two dolphins await their fate in the nets of Taiji.  Photo by Terran Baylor.

On the bright side, for the first time, a number of Japanese activists became involved in the Taiji issue, joining me and our Save Japan Dolphin Team in Taiji, while activists organized two successful demonstrations in Tokyo against whaling and the dolphin hunts.  We plan to do everything we can to encourage these young activists to continue their efforts to protect dolphins and whales.

Despite increased police presence, our Cove Monitors continued to bring to you the details of the dolphin hunts.

Our work to spread the news about the dolphin hunts and mercury dangers to Japanese consumers continued, and will go on this spring and summer.   And our strategy of avoiding confrontations and instead working to communicate the dangers of eating mercury-contaminated dolphin meat is reaching more and more people in Japan.

We are already deep into planning for next Sept.1st and the new dolphin hunt season.  We will have a few surprises in store, so keep tuned in to learn the latest.

This was never going to be an easy effort.  We know the dolphin hunters are entrenched and backed to the hilt by the Japan Fisheries Agency, which is willing to spend enormous amounts of taxpayer money to encourage the slaughter of cetaceans.

So this is when we need to fight even harder to finally end the dolphin hunts once and for all.  It is not acceptable that almost 900 dolphins have been killed this year.  The meat is poisoned and should not be eaten by anyone.  We need to protect Japanese children as well as dolphins.

I thank all our Cove Monitors and volunteers around the world who have fought so hard for the dolphins.  And a big THANK YOU to all our donors, whose generous contributions make our work possible.  We could not do it without you all!

I’m in this until we shut Taiji dolphin hunts down.  I hope you will stick with me – we can do this!