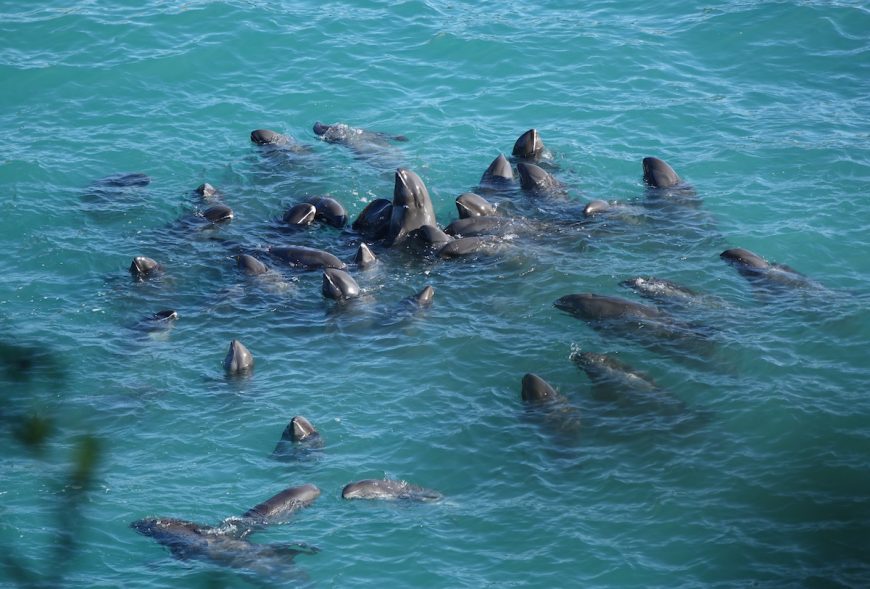 Taiji, 11-10-19: A brutal captive selection and slaughter of melon-headed whales broke a streak of 24 days of ‘Blue Coves’ where no successful drives took place. Today, no lives were spared as three dolphins were selected for captivity, destined to spend the rest of their lives entertaining humans, and 37, including multiple juveniles, were mercilessly slaughtered.

Hunters discovered the pod around 7:40 a.m. and began to gather in the east to drive the dolphins closer to Taiji. As they approached, Dolphin Project Cove Monitors could see an enormous cluster of white water, where hundreds of dolphins were swimming for their lives away from the hunting boats. Once nearer to the Cove, the pod split and over two thirds of them were able to escape the drive and swim to safety towards the open sea. Initially a few boats chased after them, but they soon gave up and assisted in the pursuit of the other dolphins who were still in their grasp. Black smoke billowed as the boats charged after the dolphins, driving them closer towards the Cove. Skiffs joined the banger boats and weights tied to the ends of ropes were thrown in the dolphin’s direction to further terrorize the pod. 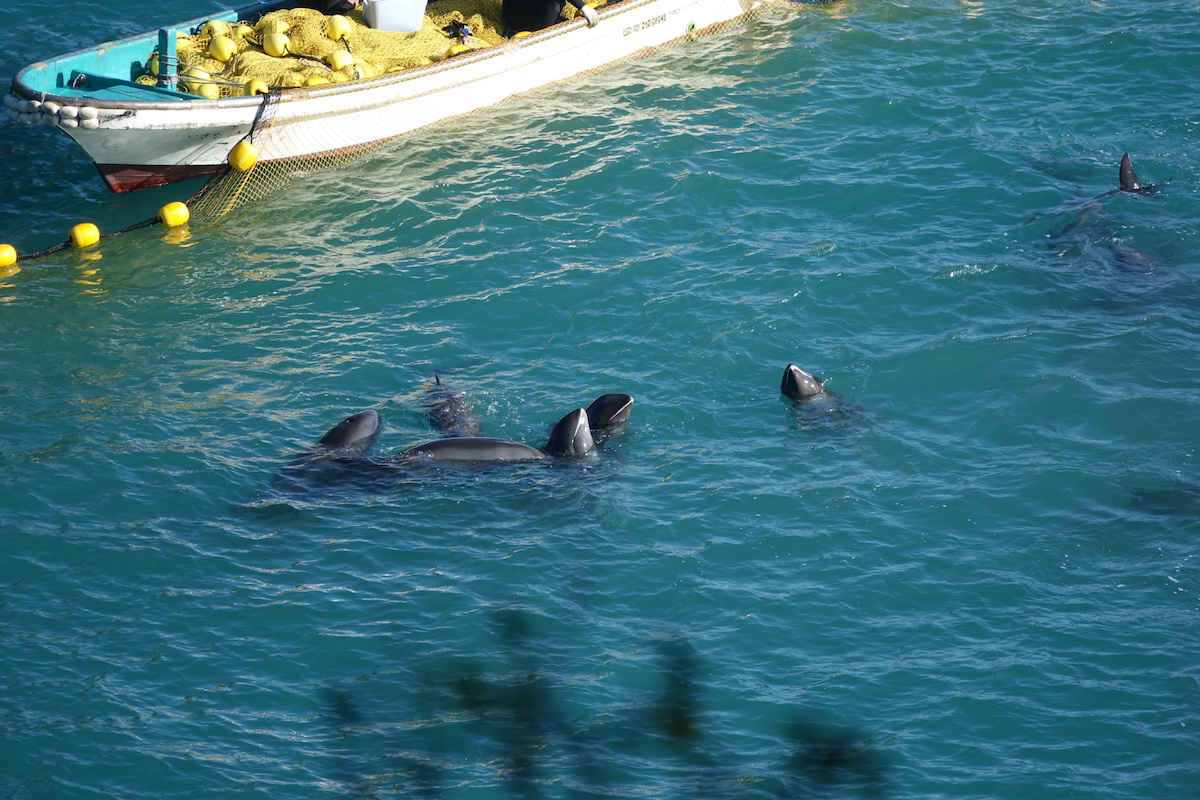 After being driven into the Cove, the exhausted dolphins are pushed into shallow water, Taiji, Japan. Credit: DolphinProject.com 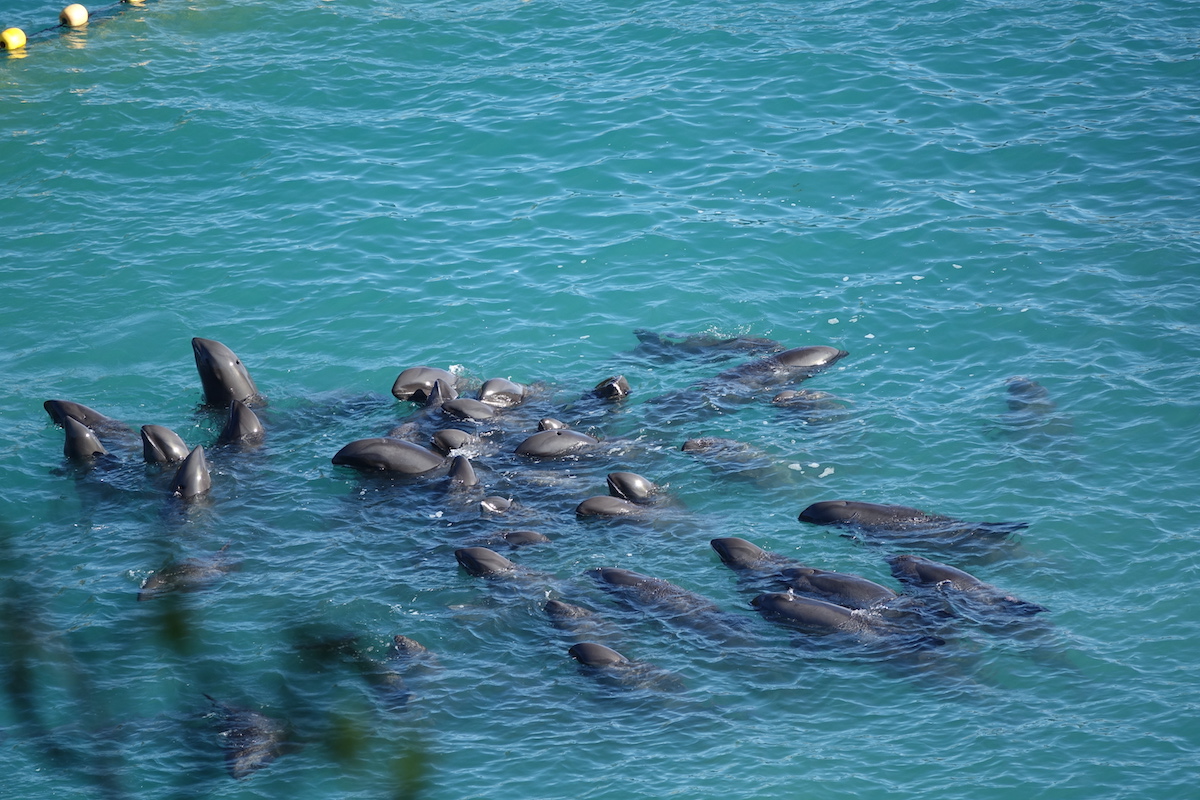 Dolphins, including several juveniles huddle closely together after being driven into the Cove, Taiji, Japan. Credit: DolphinProject.com 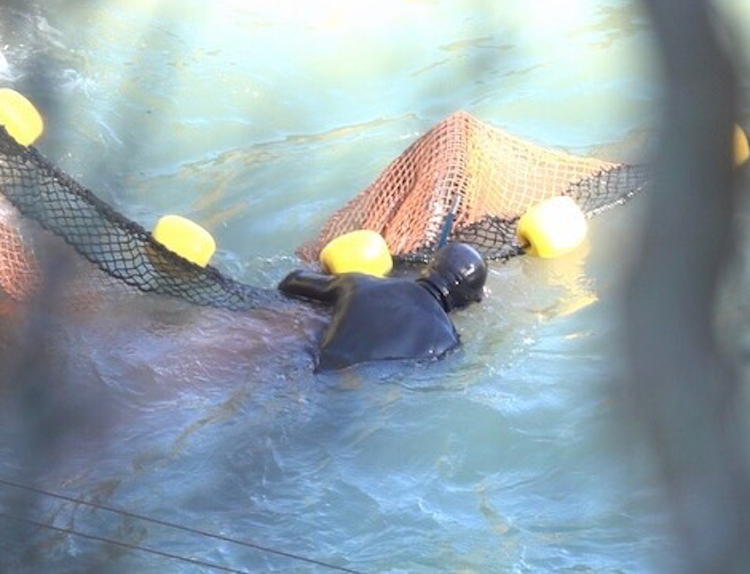 The dolphins appeared panic-stricken as the net enclosed them in the Cove, sealing their fate. They repeatedly spy-hopped, observing their foreign surroundings above water, and tail slapped the surface in distress while huddling closely together. These would be their last moments as a family. There were multiple juveniles swimming tightly next to their mothers in attempts to seek comfort. As the skiffs revved their engines, forcing the dolphins towards the killing beach, several of the pod became entangled in nets and threw themselves at rocks to evade the hunters. The divers reactively launched at the dolphins, grabbing them forcefully by their rostrums and dorsal fins, pushing them away from the periphery. This wasn’t done out of mercy – injured/scarred dolphins wouldn’t be desirable for captivity. 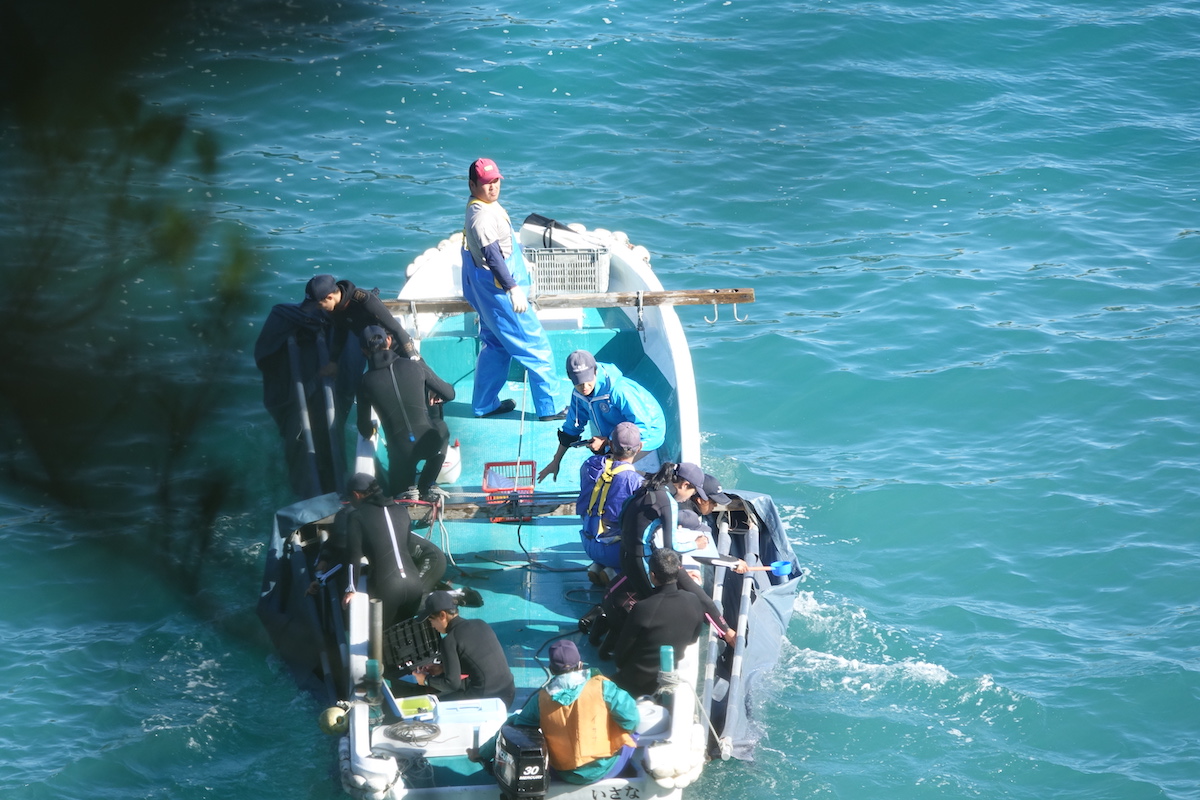 The captive selection process was over within 20 minutes. Trainers chose to tear three dolphins away from their families to be put on display for human gratification. The rest of the pod, moments after watching their family members being taken away in slings, would be slaughtered. These dolphins were handled more aggressively, with many observed bleeding from their rostrums and one suffering from a gash on its back. Each was pushed under the tarps to its death. Loud thrashing could be heard as they were killed. 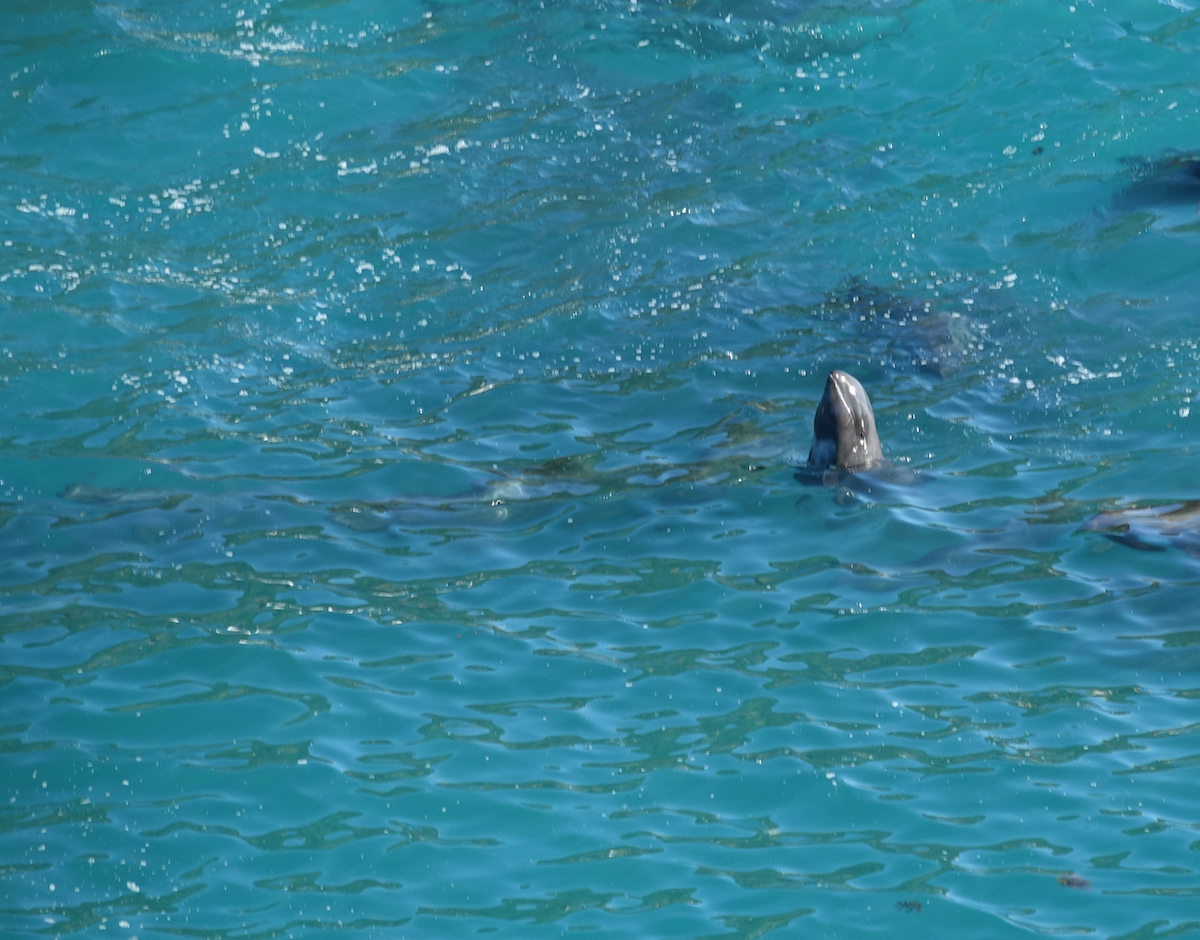 A lone melon-headed whale spyhops after being driven into the Cove, Taiji, Japan. Credit: DolphinProject.com

A total of six skiffs left the Cove, dragging the lifeless bodies of melon-headed whales tethered alongside them. Before the final two skiffs left, one remaining dolphin was spotted alive, logging at the surface while surrounded by the dead bodies of its pod. It too was dragged under the tarps to be killed, the exhausted dolphin showing no resistance against the hunters. Our hearts broke as we documented the demise of this pod of melon-headed whales. Hunters struggled to angle the boats to conceal the dead bodies with tarps. However, we were able to see amongst the dead, two small calves, cruelly robbed of their chance of living wild and free. Instead, these beautiful creatures would be reduced to slabs of meat and sold in supermarkets for human consumption. 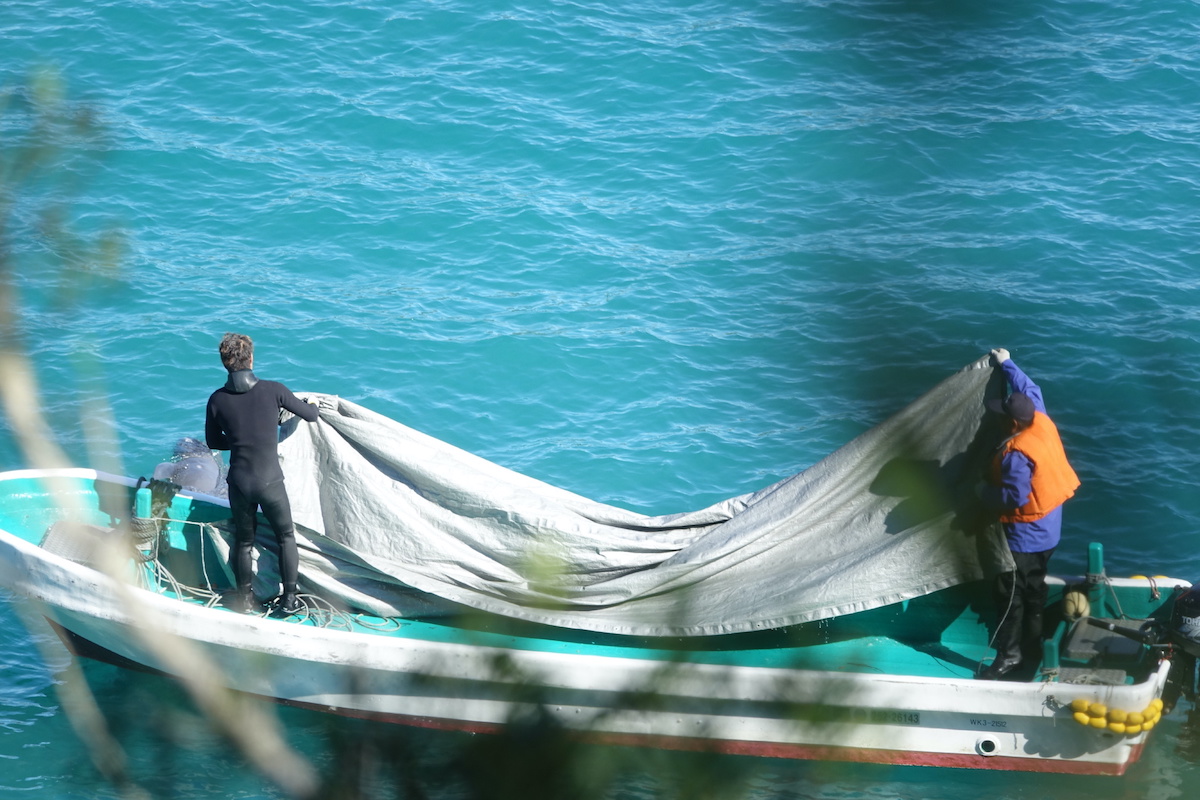 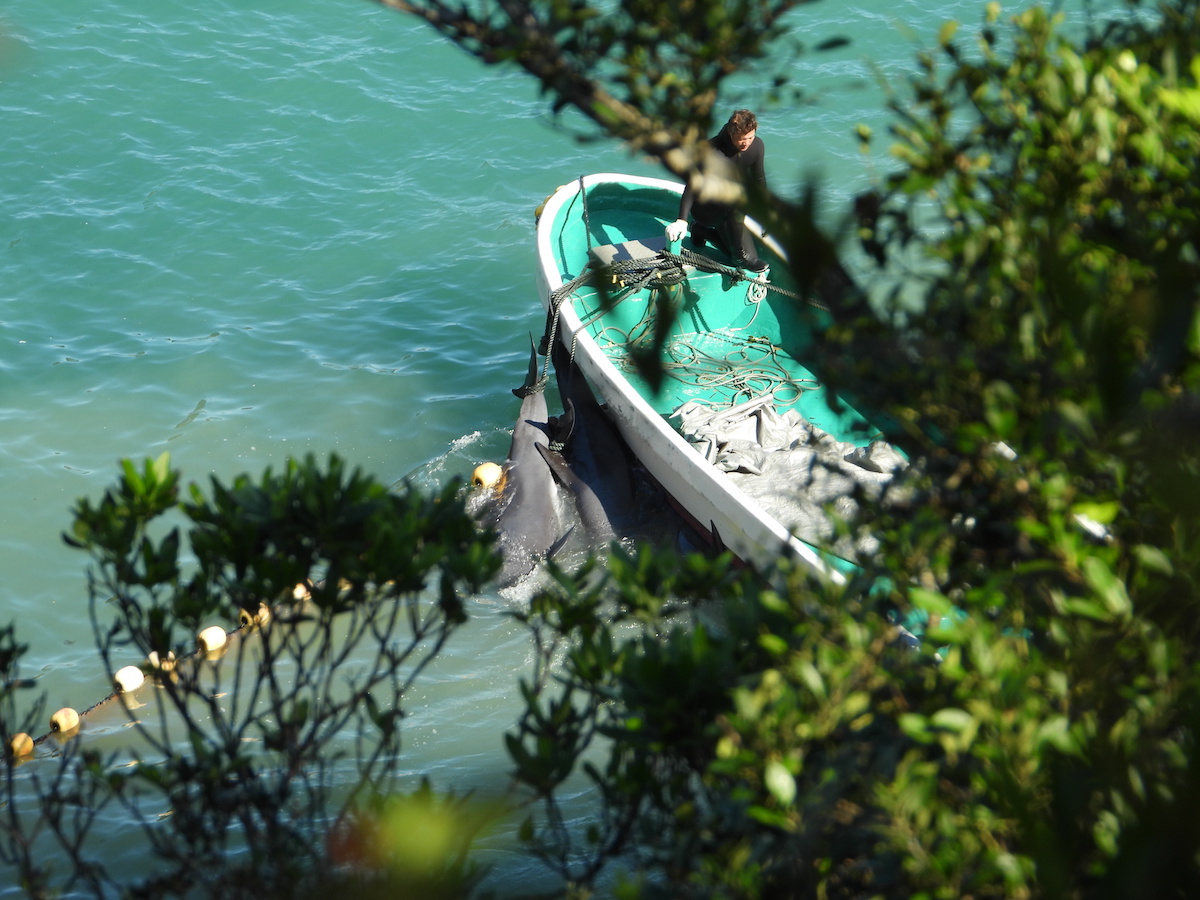 Melon-headed whales tethered to skiffs are removed from the Cove after slaughter, Taiji, Japan. Credit: DolphinProject.com 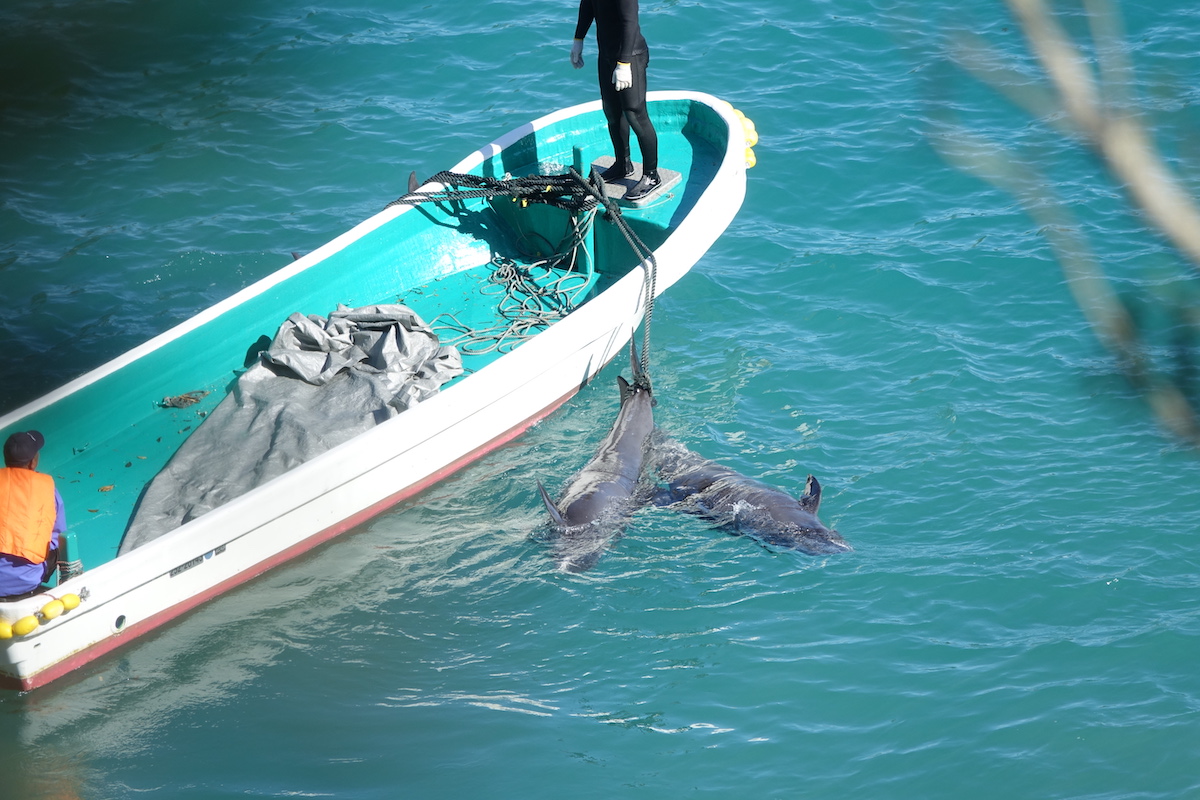 Once wild and free, these dolphins will now end up on plates for human consumption, Taiji, Japan. Credit: DolphinProject.com

Once the slaughter was over, we decided to check on the pens in Moriura Bay to see where the three that were taken captive had been placed. We were able to locate them at the Taiji Whale Museum pens. The dolphins appeared disoriented and agitated, unable to escape and without the presence of the rest of their pod. It’s hard to believe that just hours before, this pod was swimming in the ocean, able to make their own choices and decisions. Now, the captives would be at the mercy of trainers; the dead would end up on plates for consumption.

Dolphin Project Cove Monitors will continue to document the captures and slaughters that take place annually in Taiji. Your help is needed to share this information with the world and show why we all must say NO to any dolphin show!

Featured image: A pod of melon-headed whales is driven into the Cove, Taiji, Japan. Credit: DolphinProject.com