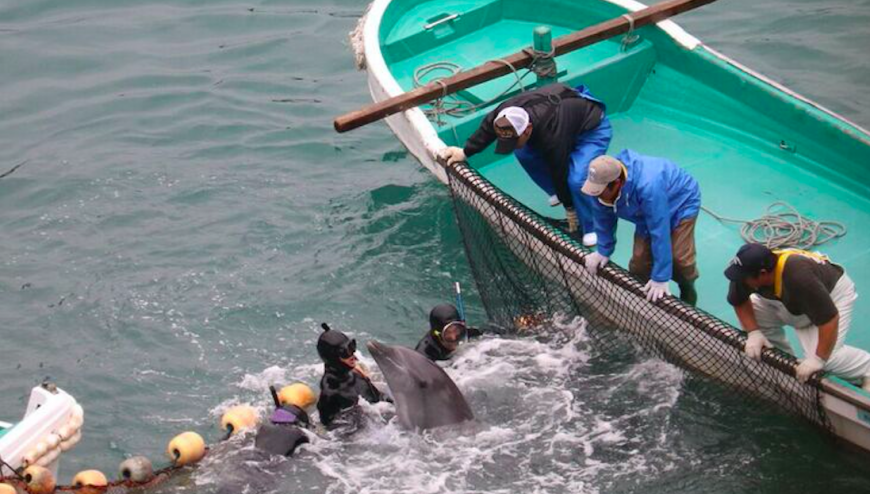 Preparations are now underway in Taiji, Japan as the 2016-2017 dolphin hunting season is slated to commence next month, on or around September 1. Along with the brutal slaughter of multiple species of dolphins (quota has not yet been released), approximately 150 bottlenose dolphins have been sold to non-JAZA aquariums in Japan and overseas.

According to The Sankei Shimbun, 20 brokers participated in a lottery held in Taiji to determine purchase orders for wild-caught dolphins. The mammals will be chased, harassed, separated from family pods and captured from the wild for a life of performing, breeding and public display. The capture process is violent and traumatic, with many animals injured, some seriously.

On July 3, 2015, the Japanese Association of Zoos and Aquariums (JAZA) announced that member aquariums can be expelled for acquiring dolphins caught in the brutal hunts in Taiji. In addition, members were required to submit certificates indicating where their dolphins were bought. JAZA implemented these procedures after being threatened with eviction from the World Association of Zoos and Aquariums (WAZA), as their purchases of dolphins violated its code of ethics and animal welfare.

The buyers of these innocent dolphins are not members of JAZA or WAZA, thus, they are not required to follow such codes of ethics or conduct. Where these animals will ultimately end up is anyone’s guess, their living conditions as good – or as bad – as the aquarium or marine park they will be shipped to.

About half of the dolphins caught in Taiji in recent years have been exported to facilities in China, South Korea and Russia. With no oversights or regulations, one can only imagine what these dolphins might face.

Dolphin Project will be on the ground during on Taiji during the entire hunting season, documenting and disseminating information. Follow us on our social media at Facebook, Twitter and Instagram for live posts throughout the season.

Attend or host a Japan Dolphins Day event in your area.

Make a donation to help support our work.