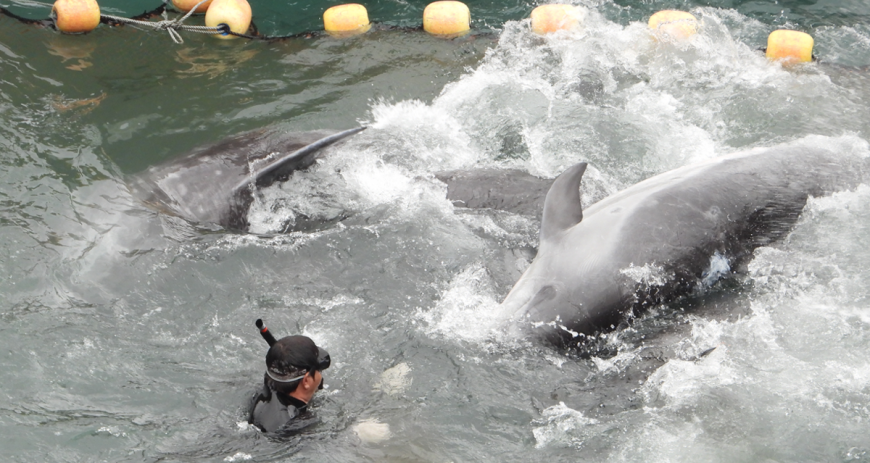 In the final month of the dolphin hunting season, Taiji’s dolphin hunts continue to present causes for alarm.

On February 10, a pod of about 10 bottlenose dolphins was harassed and split apart for the sake of captive exploitation. Bottlenose in particular are highly valuable to the captivity industry. They are the most common dolphin species found in dolphin shows, swim-with programs and other captive interactions. The dolphin hunting boats persistently chased this pod of dolphins for several hours in the late morning. At least two mom and calf pairs were sighted in this family group. Once the frantic and exhausted pod was trapped in the Cove, dolphin trainers gathered for a captive selection process that lasted a few hours. After measuring and inspecting several individuals, the trainers decided to take five dolphins from the pod for captivity. 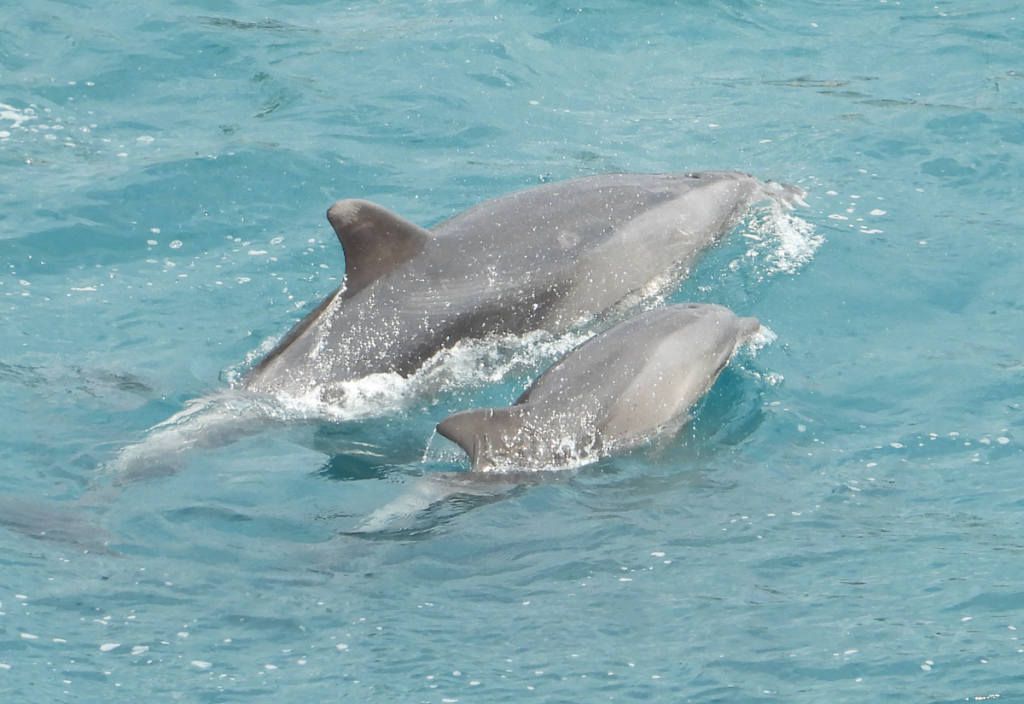 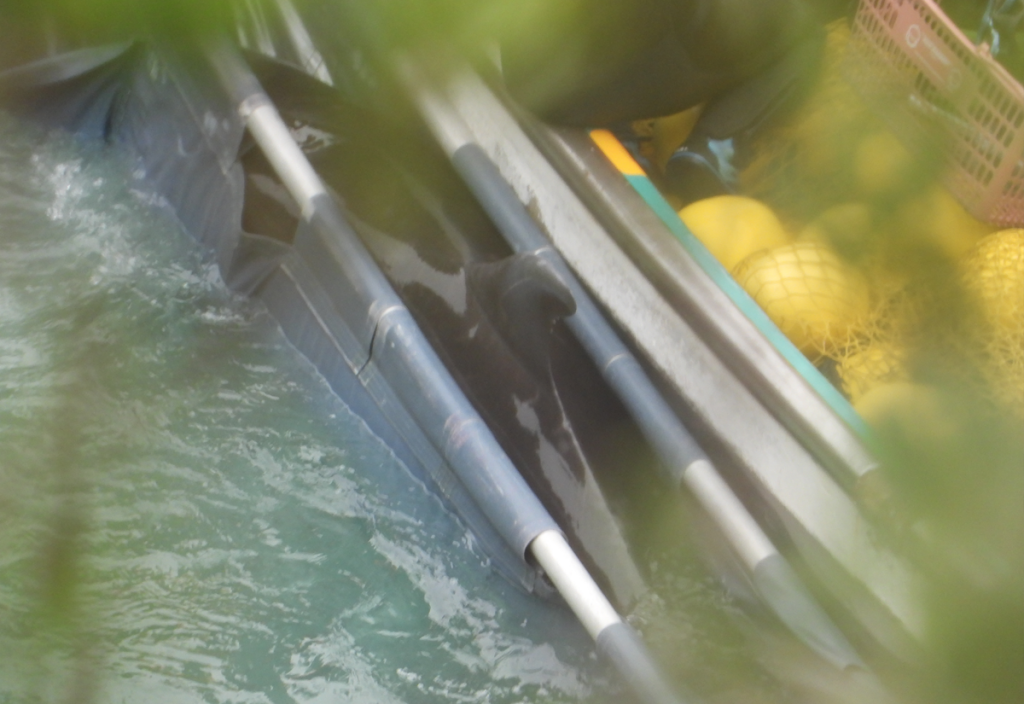 Captured bottlenose dolphin carried away in a sling. | Credit: DolphinProject.com

The remaining broken and traumatized pod was chased back out to sea. Although “release” is a better fate than capture or slaughter, there is additional cause for concern on the survivability of dolphins released after a drive hunt. The hours it takes to be chased to the Cove from miles offshore, and the extreme stress induced as family members are separated from the pod are significant. These are major disruptions to wild dolphins’ natural living habits, and cause them to expend a huge amount of precious energy.

The brutality continued the following day on February 11, when the hunters successfully drove in a pod of about 35 melon-headed whales. After being netted in the Cove, the pod became frantic and huddled next to one another. Several of them were nudging their heads against one another, seemingly to comfort their pod mates. Knowing just how intelligent, sentient and socially complex these marine mammals are, this state of panic was incredibly distressing to witness. 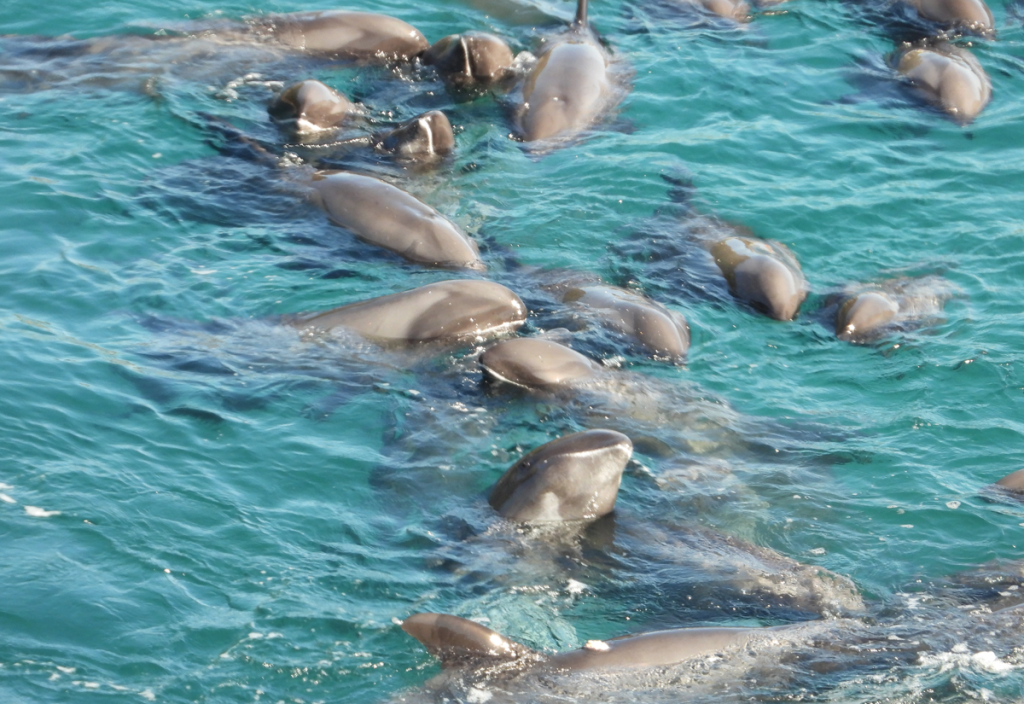 Melon headed whales appear to comfort each other in their final moments. | Credit: DolphinProject.com

After several excruciating minutes of the distressed pod huddling together, the hunters forced the entire pod into the shallow waters of the killing Cove. Covered by an excessive amount of tarps, only the melon-headed whales’ final thrashes were heard as the slaughter ensued. For sentient, self-aware, intelligent and intensely social animals, the level of suffering involved in the entire drive and slaughter process is incredibly high. 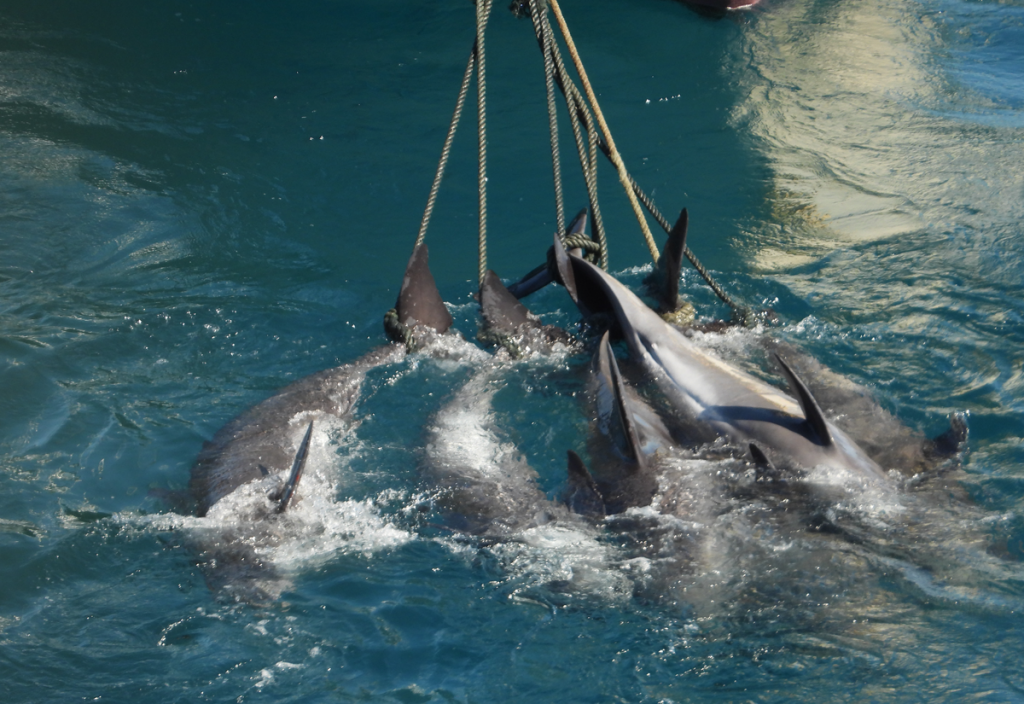 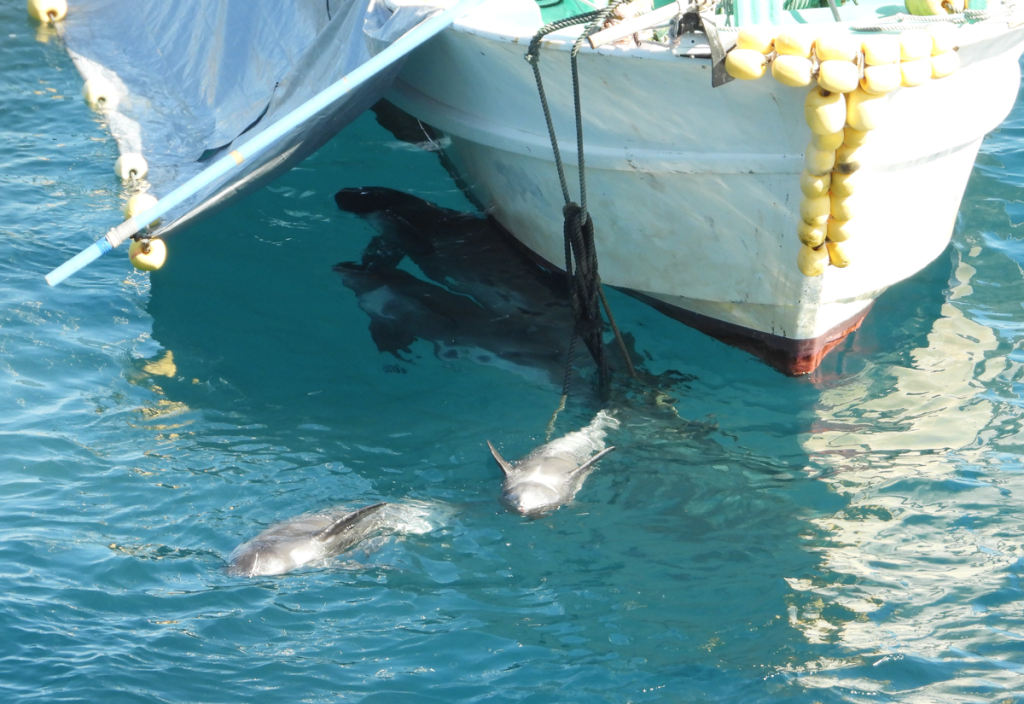 Lifeless bodies of melon headed whales being transported to the harbor. | Credit: DolphinProject.com

The dolphin hunters’ streak of finding dolphins continued into the next day. On February 12, the dolphin hunting boats located a larger pod of bottlenose dolphins quite early in the morning, and successfully drove them to the Cove. This pod appeared to consist of around 30 dolphins, and several of them were mother and calf pairs. A few of these calves were quite small, swimming alongside their moms in “baby position,” or in their mother’s slip stream. 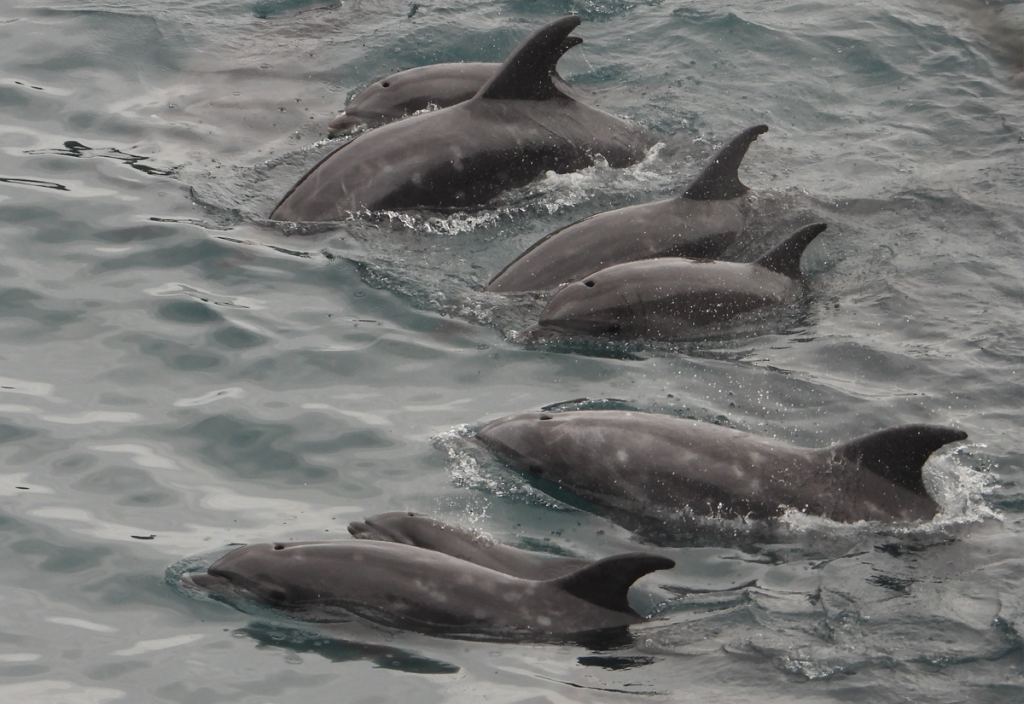 Several mother and calf pairs surface after being trapped in the Cove. | Credit: DolphinProject.com

Some of the hunters entered the water in wetsuits, while others prepared slings and nets. Dolphin trainers worked hand in hand with hunters as a brutal captive selection process began. The dolphins were viciously handled, grabbed and dragged under the tarps to be assessed by dolphin trainers. The strong bonds between pod members were evident, as several dolphins swam alongside a dolphin that was grabbed by the divers. 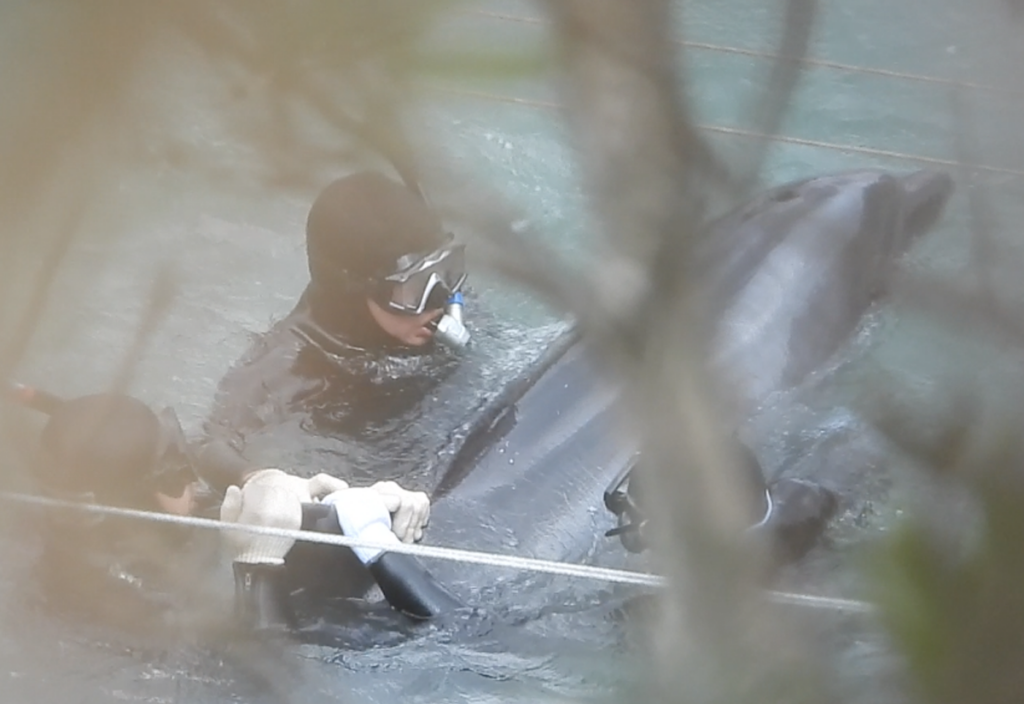 Divers grab hold of a while dolphin and wrestle it towards the tarps. | Credit: DolphinProjetc.com 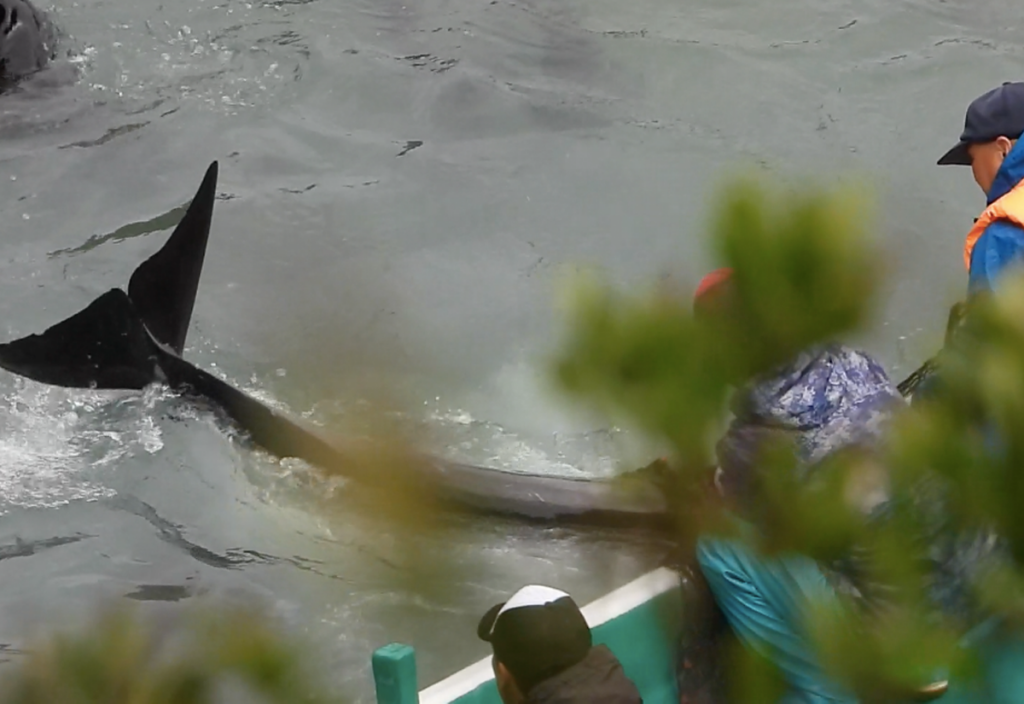 One wild bottlenose dolphin flails in protest as hunters take it towards the dolphin trainers. | Credit: DolphinProject.com

Many of the dolphins that were grabbed by divers thrashed and resisted, but unfortunately were overpowered by the team of hunters. The events of this drive were excruciatingly clear proof that dolphins do NOT volunteer to be drafted into captivity. 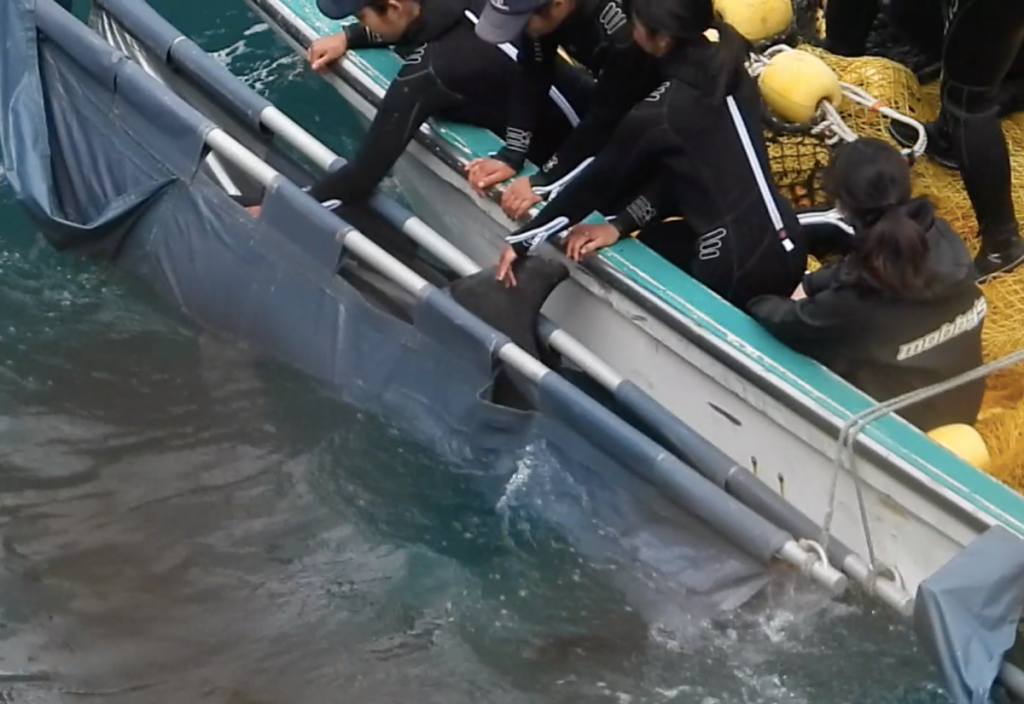 Four of them were ultimately taken for captivity. The remaining, damaged pod was driven back out to sea. The amount of manpower, fuel and other resources that goes into this operation is staggering, this time, just to capture four dolphins.

After three agonizing days in a row, weather became foul and luck was on the dolphins’ side. Rain, wind and fate prevented the hunters from finding dolphins for the remaining days this week.

Dolphin Project Cove Monitors visited the Taiji Whale Museum to inspect the condition of the captive dolphins there. The team documented a horrific injury on Hamata, the white Risso’s dolphin at the Taiji Whale Museum. Several deep gashes were apparent on Hamata’s head, along with bright, purple bruising. Normally, visitors are able to walk right up to his pen as part of a feeding interaction program, but the entire sea pen area was closed off, likely because of this injury.

In November 2014, two Risso’s dolphins were captured during Taiji’s dolphin hunts – a piebald Risso’s and a white Risso’s. Both males were named by combining syllables from the words “hamayu” – a white flower found in Taiji and “Taiji”. The piebald was given the name, “Yuji” and the white Risso’s, “Hamata”. In 2017 Hamata was moved into the Marinarium – a small, fully-enclosed tank that gets no sunlight, complete with a walk-through tunnel that greatly reduces the swimming area available to the dolphins. This is also the tank where Angel resides, a true albino bottlenose dolphin captured in January 2014. 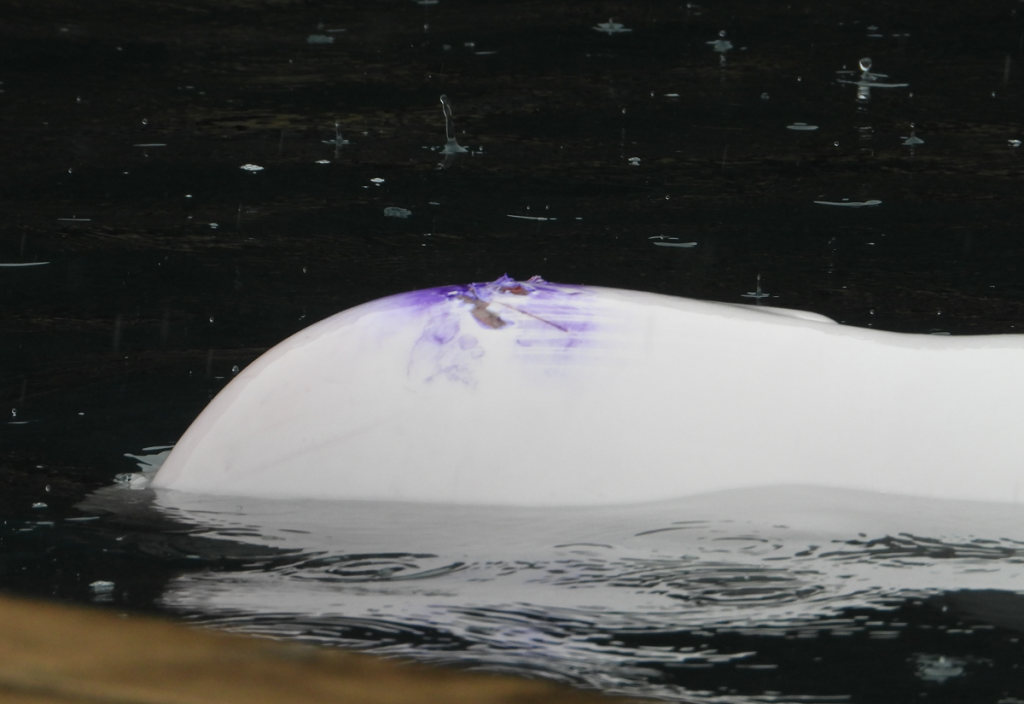 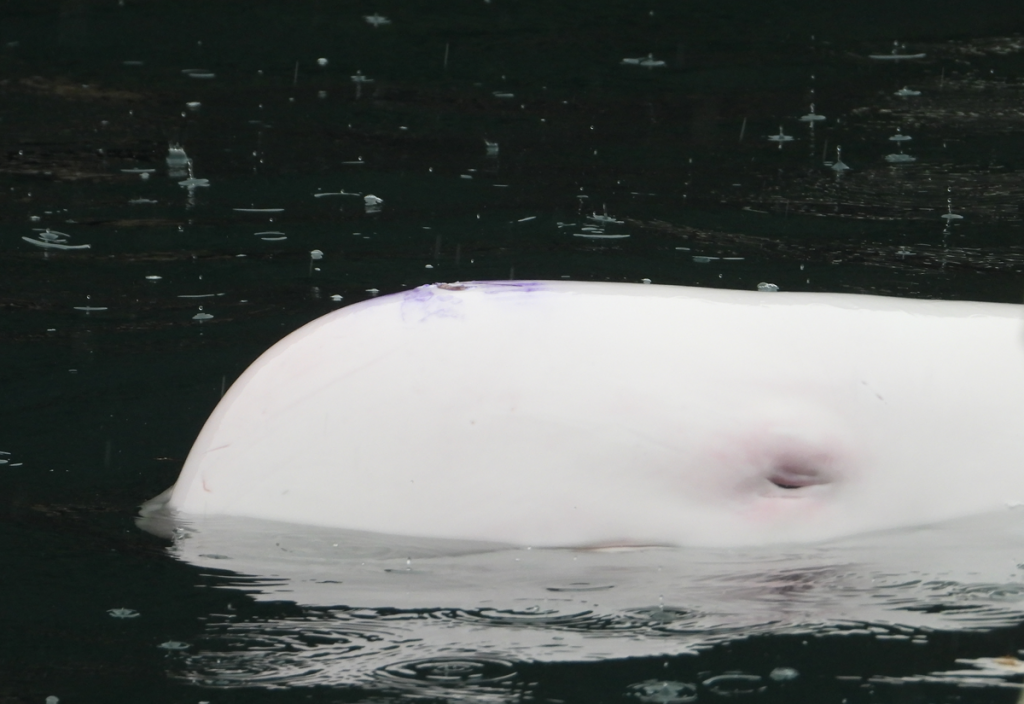 Hamata raises his eye above the surface with the severe injury on the top of his head. | Credit: DolphinProject.com

In the wild, dolphins have space and freedom to come and go as they please. In captivity, dolphins have nowhere to go for “time out” and, living in deplorable conditions causes immense stress amongst tank mates.

More than ever, it is critical to put a spotlight on Taiji’s drive hunts, including the extreme cruelty involved along with their financial ties to the captivity industry. Even if an aquarium or marine park boasts that none of their dolphins were wild-caught, life in a tank is no place for any dolphin or other whale.