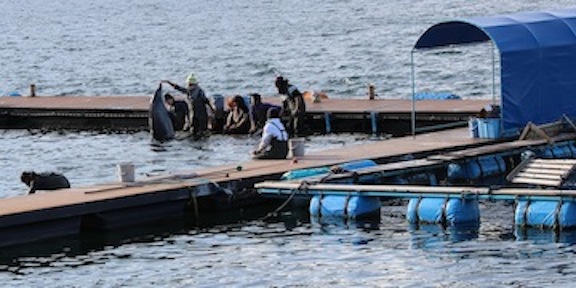 NOTE:  Cynthia Fernandez has been a strong advocate against captivity for dolphins as she visits many schools in the San Francisco Bay Area.  She arrived in Taiji shortly after Christmas to be a Cove Monitor.  While the dolphin hunts have ceased for the holidays, it was the only time Cynthia could get off from her job as a teacher.  Here is her report on the dolphins being held in captivity in Taiji.  Cynthia is expecting the hunts to start up again as soon as this weekend.

Cynthia notes:  “I am available to present to any school in the SF Bay Area, and also I’m willing to help any individuals who would like to design their own presentations.  I am happy to share the iMovies that I have made.” .

Like many of our volunteer Cove Monitors, Cynthia spent her own money and time to come to Taiji to help the dolphins.  I want to thank her and all our volunteers who work so hard for the welfare of dolphins.  Thanks also to all of you who donated this past year to our efforts! – Ric O’Barry

As an educator who visits classes and does anti-captivity presentations for middle school and high school students, I was drawn to Taiji.  Teaching high school biology just wasn’t enough; I had to bring my passion for cetaceans into the classroom.

I decided to design a presentation and speak to students about dolphin captivity after being shocked by things that my own students had said.  When I informed them that I would be going to Baja California to see whales and dolphins, many of them asked, “Are you going to ride a dolphin?”  It was then that I realized what many young people think about dolphins.  Another student told me how much she loved dolphins and how she enjoyed seeing them at our local marine park.  I was shocked and realized that kids just don’t know the facts about dolphin captivity.  Therefore, I spent my summer designing a presentation in the hopes of enlightening students about the dark side of captivity.

What started out as presentations just for my own classes quickly spread into guest speaker roles at other classes within my school.  Now, I have branched out to visiting other schools and hope to continue to spread the word.  After many presentations and discussions with students about dolphin captivity and the link between the captivity industry and the slaughters in Taiji, I knew I had to come to Taiji.  It was calling me.

The only available time frame for me to travel to Taiji was winter break.  I knew that I would have several days without hunting, time to visit the many captive dolphins of Taiji.  My first sightings were the sea pens across the harbor.  When I looked across the water and could see the occasional dorsal fins at the surface, I felt a sick feeling in the pit of my stomach.  Having followed the massive capture of bottlenose dolphins through online media recently, I knew what those dolphins had endured and how they had ended up in those tiny, little sea pens.  My heart went out to them, and I willed them to jump out of those pens and swim to freedom, but, instead, watched the trainers throw dead fish to them and use a long stick to keep the gulls away.  I thought about how those dolphins must long for their freedom, their families, both so cruelly taken away from them by the greed that is Taiji.

Next: Dolphin Base.  Here, the sea pens are very close and you can really see the dolphins well.  I was struck by how many there were — at least, 3-4 dolphins per tiny, little pen.  Many bottlenose dolphins, pacific white-sided dolphins and one very sad and lonely pilot whale were there.  I remembered the horrors that pod of pilot whales had endured not long ago and shed a tear.  There is a slightly larger pen in the middle with several smaller pens surrounding it.  I was struck by how dependent these dolphins are on their “trainers.”  Anytime a trainer walks by, they leap into the air in hopes of receiving a dead fish or, maybe, a little attention.  These animals must be so incredibly bored the vast majority of the time.  So sad to think that the highlight of their day is when the trainers come around.

When the trainers arrive with their buckets of dead fish, the dolphin activity picks up, all except the pilot whale who listlessly logs in one area in the sea pen it shares with several bottlenose dolphins.  It seems oblivious to the leaps of the bottlenose dolphins and the presence of the trainers.  To think of the horrors that animal has seen and endured breaks my heart.  I wonder how long this beautiful animal will survive.

One day, guests arrive at Dolphin Base to interact with some of the dolphins.  They are young teenagers (they look to be high school age), and there are four of them.  Each time a dolphin leaps out of the water, they squeal with delight.  I can’t hide my disgust.  The trainer puts the dolphins through a series of “tricks” such as tail-walking and spinning the hoop, and also allows the visitors to rub their bellies and give the customary “flipper” shake.  The visitors are delighted and the dolphins are rewarded with dead fish.

After the visitors leave, the trainers make their way around the other pens to “train” the dolphins.  Each time a behavior is performed correctly, a dead fish is the reward.  I watched as the trainers injected the fish with what I can only presume is medicine before delivering them to the dolphins.  Other dolphins await their turn, leaping out of the water in anticipation of food.  Except the pilot whale — it is having none of it and just continues to log.  To think that it wasn’t long ago that these dolphins were free, swimming with their families, hunting, playing, and enjoying life until they happened to migrate through the waters of Taiji at the wrong time.  Now, they are enslaved for the rest of their lives, destined to entertain humans to survive, except, perhaps, the pilot whale.  I worry about its fate.

As I leave Dolphin Base, I wipe the tears from my eyes as I think, not only of these unfortunate souls but also of all the captive dolphins around the world destined to entertain or “swim” with humans in order to survive.  My heart breaks for each and every one of them.

We must demand an end to the captive industry for when the paying customers disappear, so will the captive industry.  Each and every one of us must spread the word!  We must tell our families and friends and ask them to spread the word.  Social media is a powerful tool, but we must do more.  Design your own presentation and ask your local school if you can present.  When given the facts about the captive dolphin industry, kids get it!  I can’t tell you how many kids I’ve spoken to who, when asked how they can help both the captive dolphins and the dolphins of Taiji, respond “Don’t buy a ticket!”  Our youth has the power to end this, but they must be informed.  It’s up to us to give them the information they need so they can make an informed choice about whether or not they want to visit a dolphinarium or “swim” with captive dolphins.

Together, we can bring an end to this cruel, exploitative industry and, with that, drive a dagger through the heart of the Taiji dolphin slaughter!