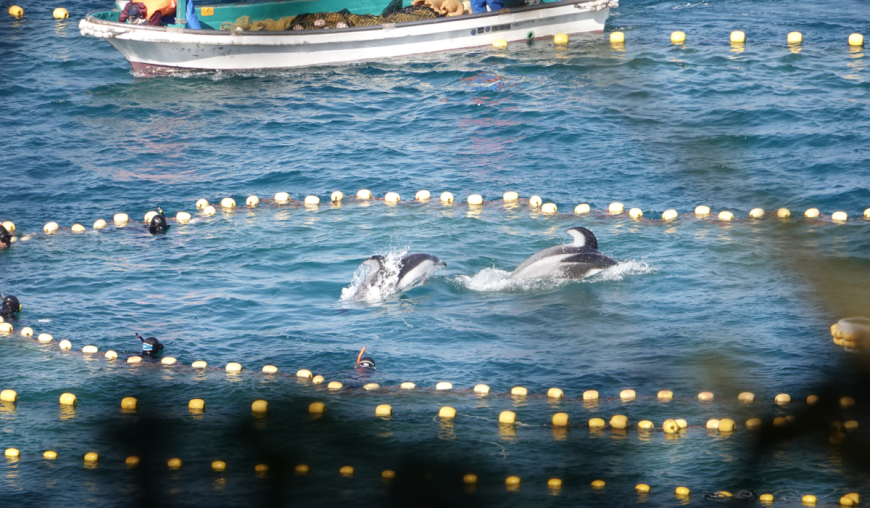 Even as Taiji’s dolphin hunting season nears to a close, horrific cruelty towards wild dolphins goes on in full force.

On February 19, a family group of about 55 striped dolphins met a horrific fate in the first red Cove of the week. The pod was chased in from deep waters several miles offshore and trapped in the shallows of the Cove. After the hunters placed nets in the water to trap the pod, chaos broke out. A number of dolphins went into a panic and became entangled in the nets, then proceeded to slam themselves against the rocks. As they got cut and bruised, several areas of water turned red with blood. 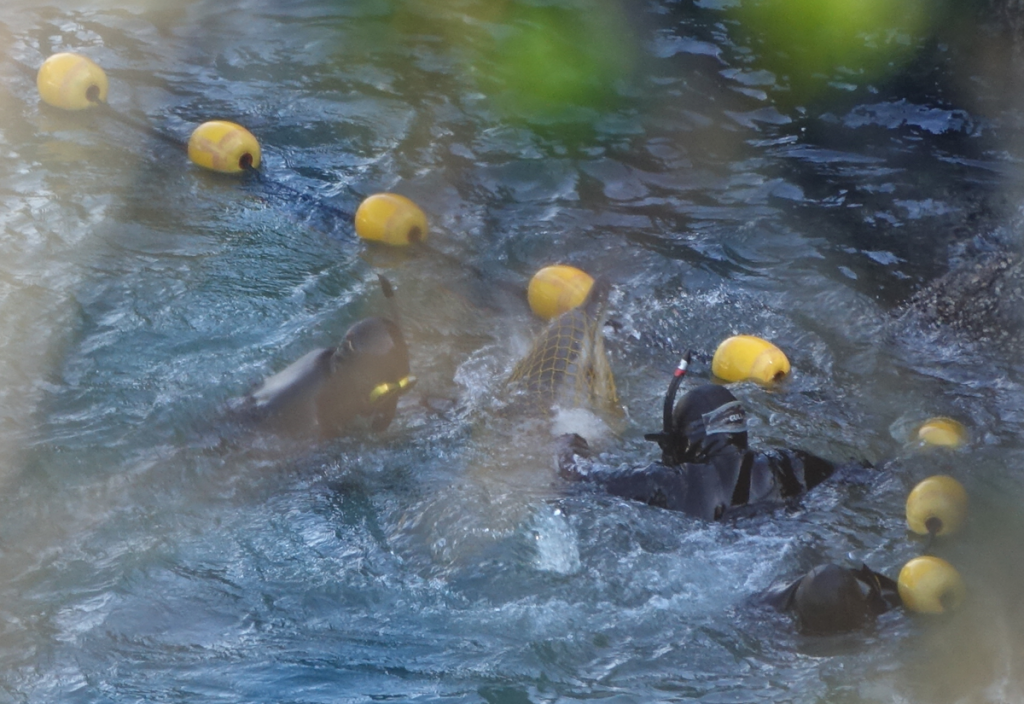 As the mammals were frantic and spread out, the hunters struggled to gain control of the pod. When dolphins tired or succumbed to their injuries, they began taking them to the trapped area for slaughter.

The most shocking aspect of this particular day was the moment one of the hunters grabbed a small calf. When the hunters spotted the mammal swimming slowly around, they approached it in their skiff. One of the hunters reached over, plucked the calf out of the water, tossed it into the skiff, and casually dropped nets over the dolphin in an attempt to hide it. The calf was still alive at this point, but the skiff slowly backed up and made its way to the slaughter area, where the dolphin was killed. The entire pod suffered greatly before all of their lives were extinguished. 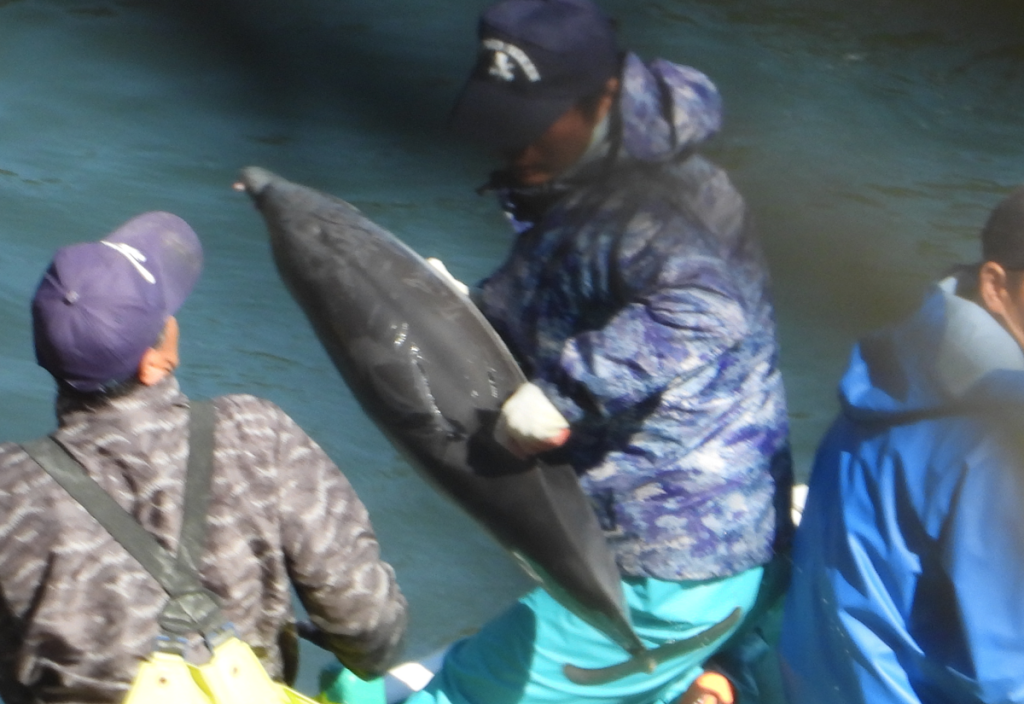 Shockingly, a small striped dolphin calf is grabbed by a hunter. | Credit: DolphinProject.com 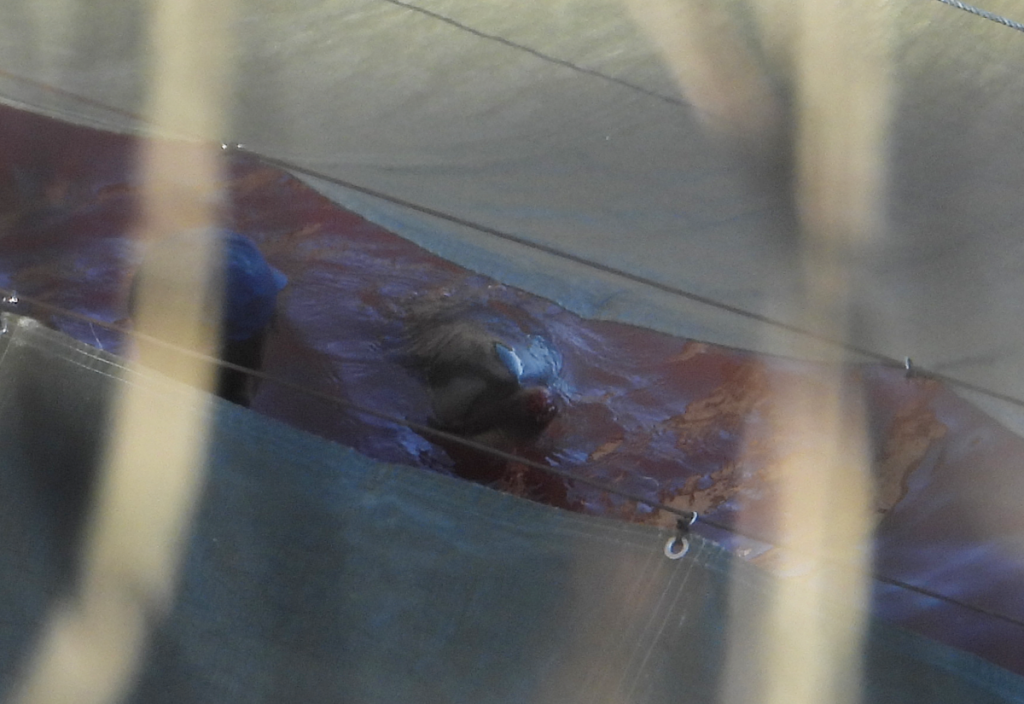 A hunter looks down at a striped dolphin in bloody water. | Credit: DolphinProject.com 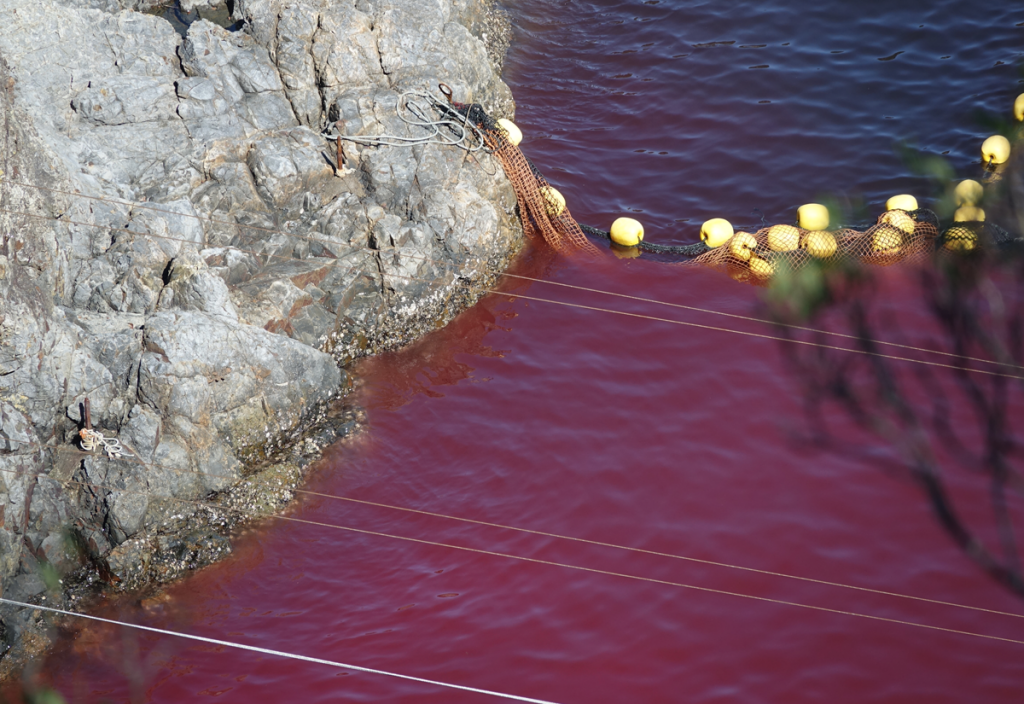 The Cove ran red with the blood of the striped dolphin family group. | Credit: DolphinProject.com 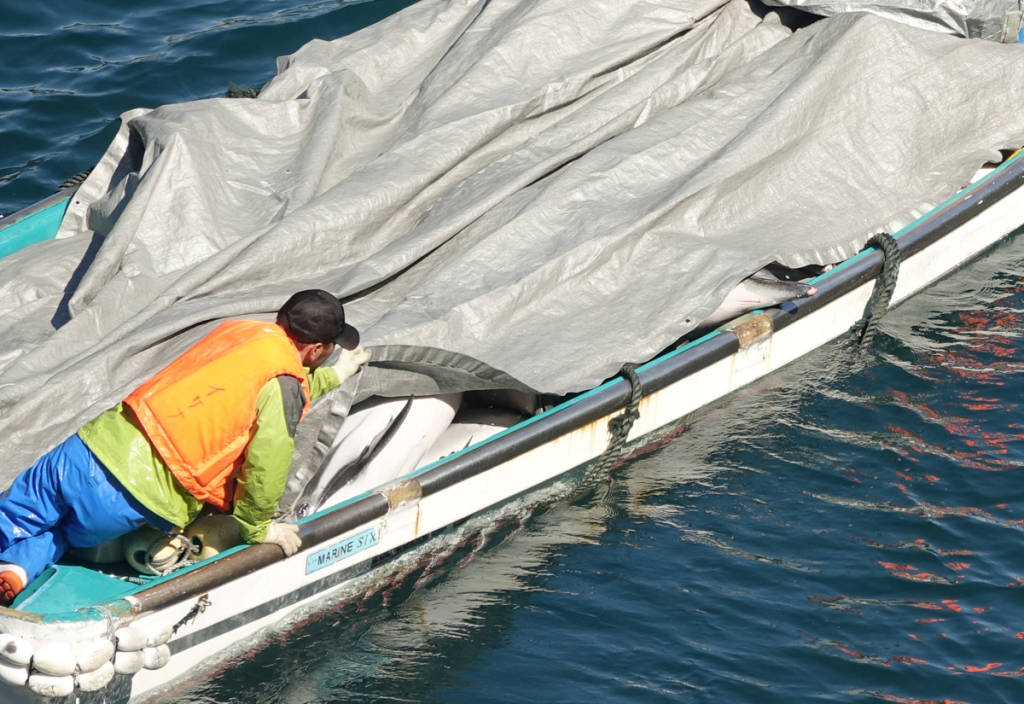 Hunters leave on a skiff loaded with the lifeless bodies of striped dolphins. | Credit: DolphinProject.com

The following day, the hunters departed the harbor at sunrise. Very quickly after embarking, they found a pod of Pacific white-sided dolphins and drove the pod towards shore. When they got to the waters just outside of the Taiji harbor, they dropped nets in the water and trapped the pod in a small area.

Soon after, one by one, each dolphin in the pod was captured. Several of them struggled, visibly thrashing as they were lifted out of the water and thrown into the hunters’ skiffs. Each dolphin was brought to the harbor, measured and assessed by a dolphin trainer and then thrown into the harbor sea pens. Now these dolphins face a lifetime of training, to eventually become performers for the global captivity industry. 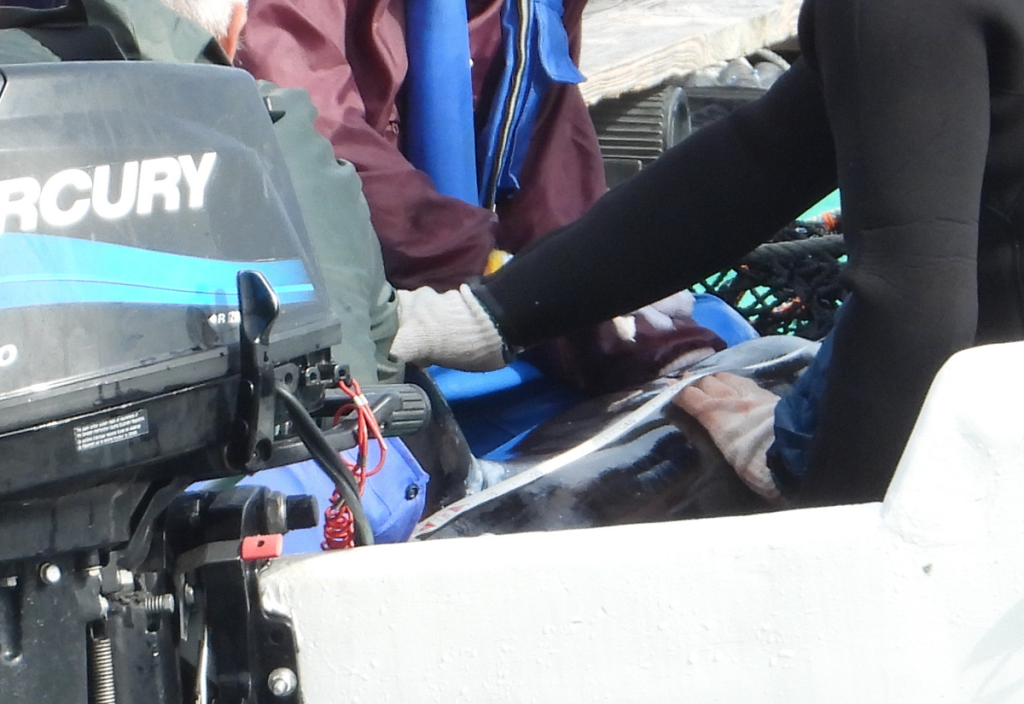 A Pacific white-sided dolphin is measured and assessed prior to being put into captivity. | Credit: DolphinProject.com 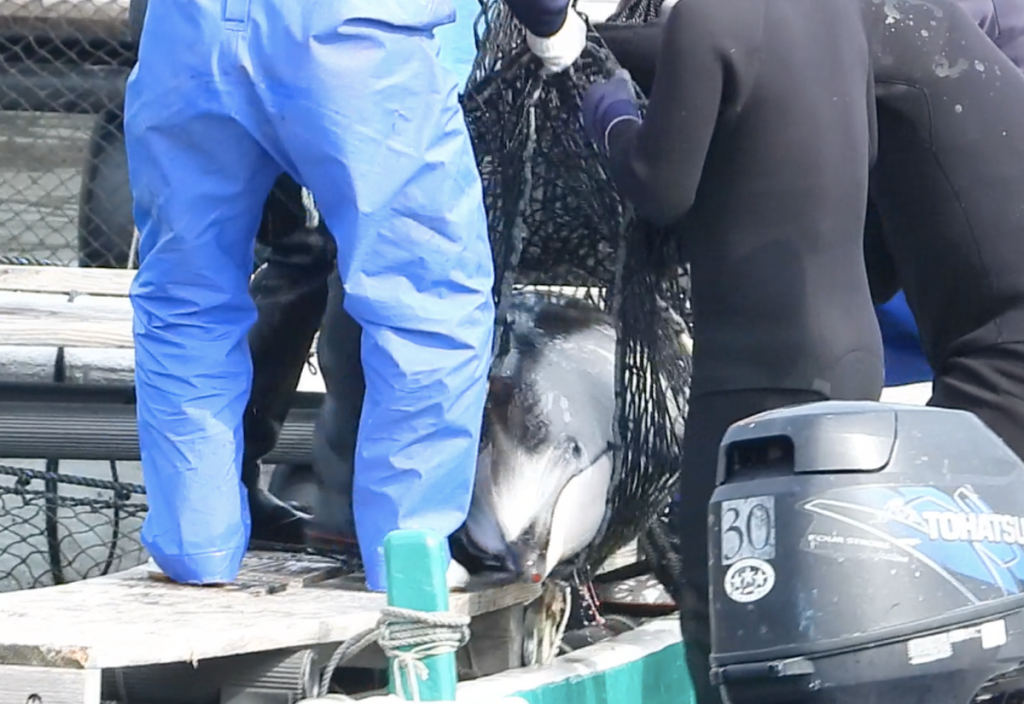 A Pacific white-sided dolphin is lifted to be dumped in a sea pen. | Credit: DolphinProject.com

During the next few days, wild dolphins swam safe and free as the hunters were unsuccessful at locating pods. However, very early on Sunday morning the hunters came upon another pod of Pacific white-sided dolphins. They drove the pod in quickly, but appeared to deliberately let a larger portion of the pod go, choosing to focus on netting and trapping a group of seven dolphins.

An army of divers descended upon the group of dolphins and went after them one by one. Each captured dolphin was taken aboard a skiff, brought to the harbor and then dumped into one of the pens. 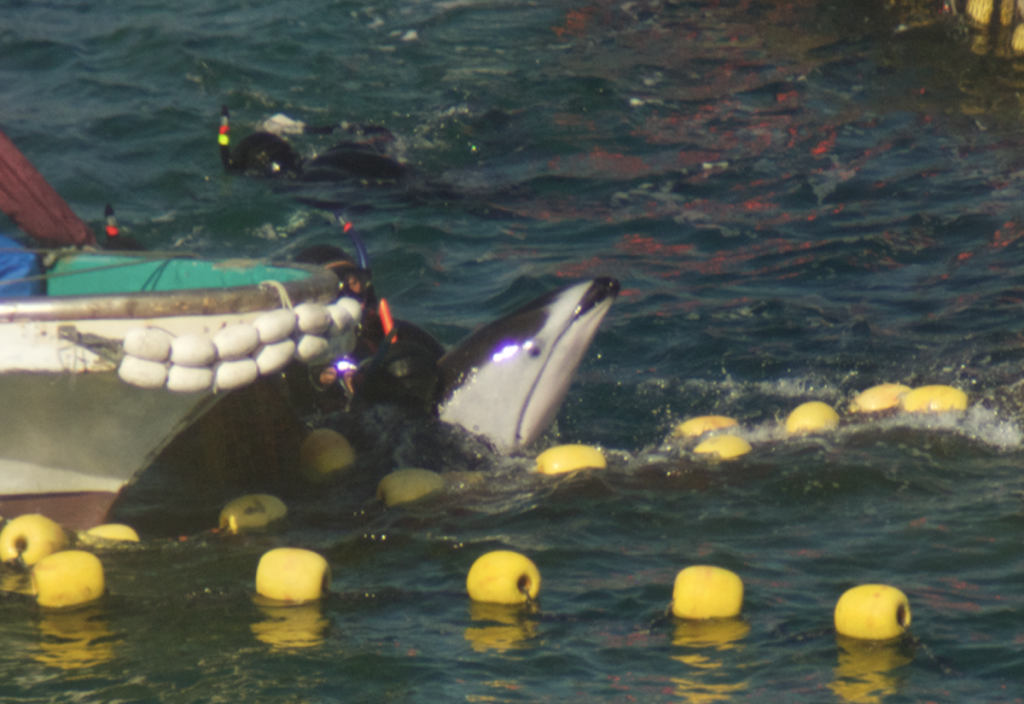 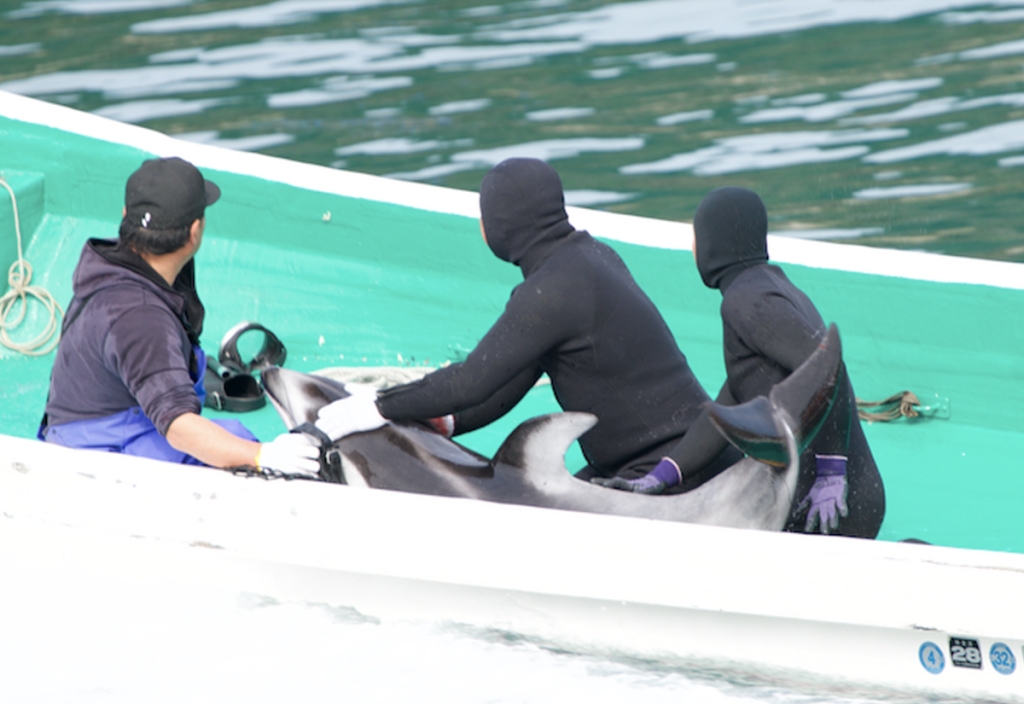 At least one dolphin died during the capture process. Before all members of the group were put in the pen, our team documented one trainer and one hunter tying a thin rope around the tail of a lifeless dolphin. This rope was secured to the corner of the pen, presumably leaving the body in the pen while the rest of the family group was dumped in. Keeping in mind the high intelligence and complex social structures dolphins have, this is particularly horrific. 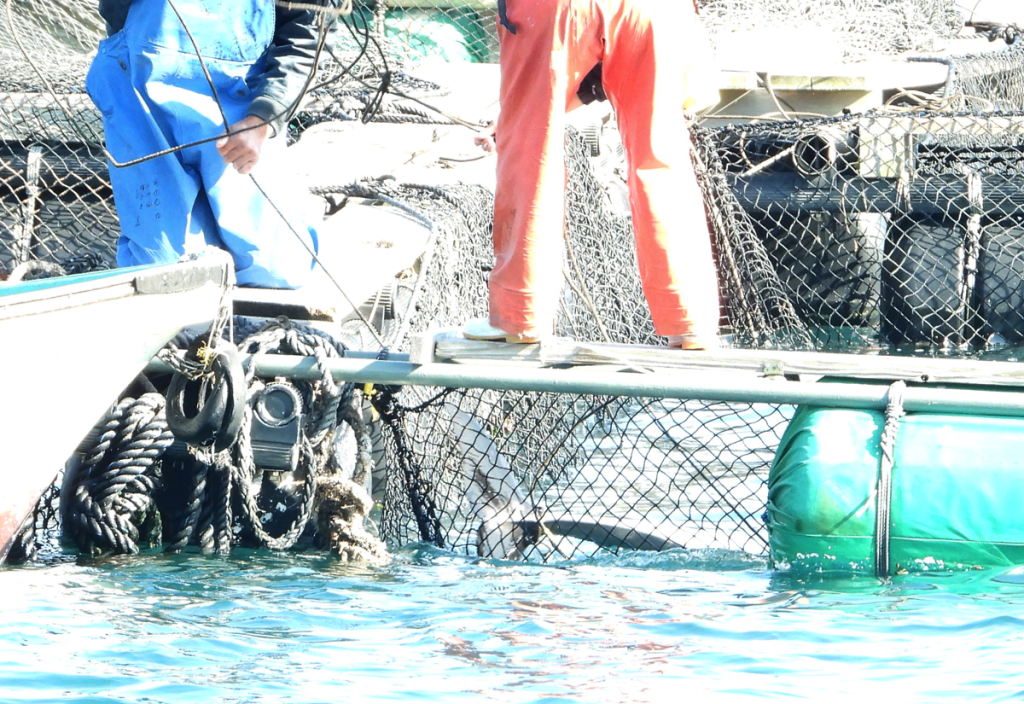 Trainers tie a rope around the tail of a dolphin that evidently died during the capture process. | Credit: DolphinProject.com

None of these Pacific white-sided dolphins volunteered to be taken into captivity. A few of the dolphins appeared to be injured. One of the foam mats used to lift dolphins into the sea pens was visibly bloody. 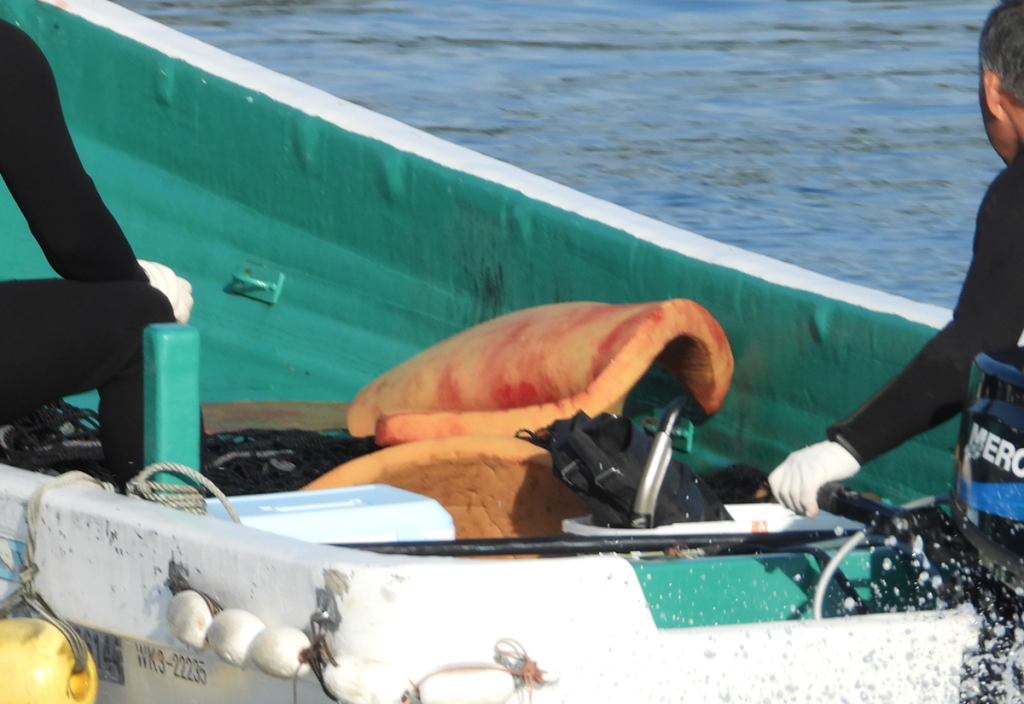 If no one bought a ticket to a dolphin show, or an encounter to interact with captive dolphins, these dolphin captures would not be taking place. Taiji’s drive hunts are kept profitable by the money made from selling wild-caught dolphins to dolphinariums all over the world, because captive dolphin displays are still being promoted as “fun” experiences. To end the cycle of cruelty, we must focus on ending the demand for captive dolphins. Please continue to help expose the immense cruelty of Taiji’s dolphin hunts to new audiences. Start a chain reaction in your community, by urging your friends and colleagues to oppose dolphin captivity and in turn, continue spreading the message. Together we are a voice for dolphins!