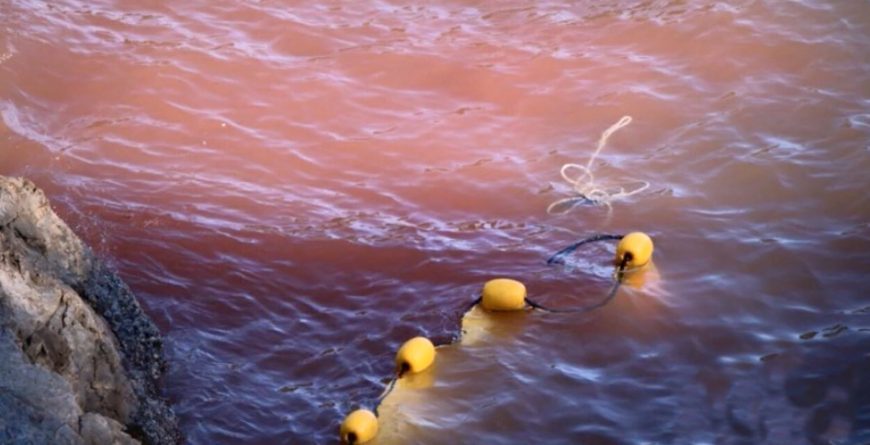 I watched as a youngster kept rubbing its little body against one of the surviving adult pilot whales. When I thought this scene couldn’t get more sickening, I saw another juvenile swim by with blood smeared across its dorsal fin. After over 62 hours of being held hostage in the cove, they were, once again, left alone overnight, with no access to food.” ~ Cynthia Fernandez, Dolphin Project Cove Monitor Today marked the third day since these beautiful pilot whales were ambushed and driven into the cove, where they have spent more than two full days trapped in waters bloody from the slaughter of their family members. This morning, divers arrived to the harbor, and prepared for another day of killing. The dolphins, traumatized and exhausted, were swimming slower, their breathing, labored. And so it went, with divers once again, grabbing the animals as they desperately drew from their last reserves of strength, attempting to fight off their captors.

Assuming the dolphins ate a full meal at the time of their capture, they have not had any access to food for at least 62 hours. As opportunistic foragers, what if they were looking for a meal when they were caught? Also, the only water they get is from the food they eat. These pilot whales are now confused, weak and dehydrated. They have been through a war and it isn’t over yet!” ~ Ric O’Barry, Founder/Director of Dolphin Project There is no doubt the dolphins knew the fate that faced them, as their family members were killed in front of them, their blood, tainting the cove a red shade of death.” ~ Cynthia Fernandez, Dolphin Project Cove Monitor

The massacre was brutal. The animals slapped their tails on the water, rolled over and over and were caught in nets as divers manhandled them under the tarps. Dolphins disappeared under the surface, never to reappear. At one point, our livestream caught the sounds of loud banging, as if a heavy vehicle was driving on a bumpy road. We quickly realized it was the sounds of thrashing pilot whales as they panicked and fought in their last moments of life.

Skiffs removed the bodies, passing the surviving pod members on their way to the butcher house. One of the larger pilot whales began making bellowing sounds, and the few remaining animals were clearly exhausted and traumatized beyond measure.

Despite the unimaginable horrors of the past several hours, something happened:

The dolphins, while pushed just moments earlier further away from the tarps, the killing clearly done for the day, refused to stray from the area. Instead, they continued to spyhop, looking behind them as if searching for their family members. As pilot whales are so socially bonded, their loyalty to their fallen pod members superseded their own concerns of survival.

We don’t know the fate of the remaining dolphins. Even if they were released, their chances of survival would be minimal. They have not had food or water. Babies have been unable to nurse. Exhaustion would prevent them from escaping from predators or hunting for a meal. In short, this pod has been irreparably devastated. Dolphin Project has been livestreaming from Taiji since the moment of their capture, and will continue to document this travesty. Missed any of our livestreams? Visit this link to watch.

At the time of this update, the remaining pilot whales are being held for a third night in the cove. Tomorrow will mark day four since they swam as free beings. They have had no food since the drive began. We will be back tomorrow morning to continue documenting and sharing their plight with the world. Please check back for updates.