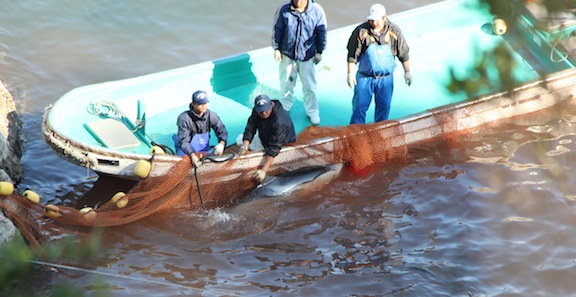 NOTE:  Heather Hill has been to Taiji for us for several years as a volunteer Cove Monitor.  Like many of our volunteers, she arrived in Taiji just in time to be confronted by a very horrible slaughter of dolphins.  Our deepest thanks to Heather and all our volunteers who are bringing the truth of Taiji to the world.   By the way, our Japanese friends are also still in Taiji, witnessing the hunts and posting to Japanese online social media, too. – Ric O’Barry

Taiji — simply hearing this word sends so many emotions rushing through me, and here I am again, back in the middle of it all.  This is my fifth time acting as a Cove Monitor for Save Japan Dolphins.  I first came in 2011, and so many little aspects of this “game” have changed since my first visit.  However I was reminded today, on my first morning back, how the bottom line is still the exact same.

At 6:30 AM this morning, the dolphin hunting boats filed out of the marina in search of dolphins.  My heart sank.  As this has been a particularly successful and profitable month for the dolphin hunters with the sale of so many live dolphins, I know it’s just wishful thinking, but I was hoping they’d take a day off, allowing the dolphins to swim free another day.  Their relentlessness never ceases to amaze me.  When the boats lined up into formation, a clear sign they have found dolphins and are driving the pod towards the Cove, I wanted to scream.  How is it that this is still allowed to happen day after day after day?

I hiked up Takababe Hill to get a better view.  With each step I took, I remembered every slaughter, every capture, every heartbreaking moment I’d ever spent on this hill.  I just couldn’t believe I was going to do it all again.

A pod of striped dolphins tore through the water, swimming as fast as they could in an attempt to escape the noise of the dolphin hunters banging on metal poles.  The banging was deafening.  I felt like I could hear it in my bones and my very soul.  I can’t fathom how terrifying it must be for a dolphin; an animal that depends on acoustics to navigate.

The boats corralled about 30 dolphins into the Cove and sealed it off with a net.  The hunters did not settle for 30 dolphins.  A part of the pod had broken off before entering the mouth of the Cove, and the boats went back to drive the rest of the pod into the Cove as well.  As the nets closed for the final time, the fate of this pod was sealed.

The dolphin hunters drove the pod closer to the killing beach, trying their best to keep the dolphins out of our sight.  Striped dolphins spend their lives in open water along the continental shelf, and, when driven into the shallow confines of the Cove, they panic more than most other dolphin species, which makes striped dolphin slaughters particularly bloody.  Today was no exception.  I watched the turquoise water quickly turn red as the dolphins threw their bodies against the rocks in an attempt to escape.  Many swam at the nets in vain, trying to break free.  Ropes were tied around their flukes, and divers towed the dolphins to the beach one by one to kill them.  The rest of the pod continued to panic in the blood.  They knew what was happening.  They watched their family get murdered one by one.  Up on the hill, the thrashing sound of dolphins dying was all I could hear.  One severely injured dolphin momentarily escaped from the killing beach.  It swam into the nets between two skiffs, desperate to get out.  Every time it surfaced, blood came pouring out of a wound on its head.

The dolphin hunters and the Japanese government claim their method of killing is humane.  They drive a spike into the dolphin, just behind the blowhole, supposedly cutting the spinal cord and killing the dolphins instantly.  This is simply not true.  What happens at the Cove is the most violent and inhumane death anyone could ever imagine.

Eventually the thrashing lessened, until the last dolphin was taken out of this world, and the only sounds that echoed out of the Cove was the laughter and yelling of the hunters.

Yet another pod of dolphins was slaughtered today in Taiji, and two more dolphins were sentenced to a life in captivity.  Writing about a slaughter is as difficult as watching it.  Words constantly fail me.  I want to be a voice for them, but what could I possibly say that would do them justice?

“These dolphins are symbolic of a new day for the environment.  It’s all about respect now, not exploitation.”  This statement may sound familiar; Ric O’Barry can be heard saying it in the Academy Award-winning documentary, The Cove.  Respect.  This is what I want to talk about on behalf of the eight beautiful souls who lost their lives today, and the two who will now be exploited in captivity.

The hunting boats located a pod of Risso’s dolphins within 30 minutes of leaving the harbor this morning, but it took the dolphin hunters hours to drive the dolphins into the Cove.  The pod put up a worthy fight.  They wanted to live.  They wanted to be free.  So who are we as humans to decide otherwise?

Once netted in the Cove, the dolphins swam in a tight group.  They spent their final moments in close body contact with each other, indicative of the strong social bonds dolphins form.  A skiff filled with trainers entered the Cove and drove under the tarps that hide the small beach where the dolphins are killed.  More skiffs drove the pod onto the beach, where the trainers and hunters waited together.  About 15 minutes passed.  The skiff of trainers emerged from under the tarps.  They had selected two dolphins, wrestled them into slings, and dragged them away from their family.  Mere minutes later, two more skiffs left the Cove, each one towing the dead bodies of the remaining pod members.  The killing and capture had happened simultaneously.  The two survivors will now spend the rest of their existence performing for crowds and remembering the day they lost their freedom and witnessed the destruction of their family.

Every dolphin that enters the Cove has its life taken away either by death, captivity, or for those driven back out to sea, a broken family and likely death from stress and the loss of protection from the breaking up of the pod.  Dolphins are incredibly intelligent, social, remarkable beings that have just as much right to live on this Earth as we do.  They have been granted the status of “nonhuman persons” in some parts of the world.   They deserve to live and be free.  They deserve our respect.

Speaking of respect, it’s important to note that racism is no more acceptable in this world than dolphin slaughter or exploitation.  I see so many derogatory comments being made against the entire country of Japan, and I wish people would understand that it is counterproductive to our mission.  How can we expect the world to respect dolphins if some of us do not even respect our own species?  Today I was denied entry to the Taiji Whale Museum.  The woman sat behind a plexiglass window, holding a sign that said “No Anti-Whalers Allowed”, absolutely shaking with fear at my very polite persistence.  Her face was quivering, and it looked like she was beyond terrified of me, and what I might do.  I find it extremely disheartening that she would have such a perception of me, and I cannot see her or anyone else in this town listening to what we have to say until they stop viewing us as terrorists and realize we are not anti-Japanese – we’re anti-dolphin slaughter.

Every time a dolphin is killed, or kidnapped from the ocean to spend a life in captivity, our world becomes less beautiful.  I saw my first slaughter two-and-a-half years ago, and here I am again watching it all take place on a daily basis as if nothing has changed.

But things have changed, and they are continuing to change.  The media attention is growing.  More and more people are talking about what is happening here in Taiji and speaking out against this atrocity.  We do have the power to end this.

I ask each one of you to please help.  Keep talking about Taiji.  Tweet about it, post it on Facebook, and help keep the momentum going.  Tell your friends, your family, strangers you meet on the street, anyone and everyone.  Encourage them to watch Blackfish and understand the direct and imperative link between what takes place in the Cove, and every single dolphinarium across the globe.  As long as aquariums are selling tickets, there will be a demand for captive dolphins.  Even those aquariums that have no dolphins are still supporting the hunts by refusing to denounce their own members.  And as long as there is a demand for captive dolphins, the Cove will run red.