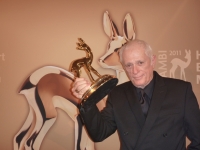 The Swiss Parliament, responding to public pressure and a dolphin-killing party held at the Swiss Connyland dolphinarium, has voted to end all imports of live dolphins into that country.  The lower house chose to ban all dolphins in captivity, but the upper house limited the ban to future imports.  There are only a few live dolphins left at Connyland, and when they die, no more will be brought in to replace them.

This is tremendous news, and a great testament to the power of grassroots activists in Europe who have worked for this ban for years.

Our colleagues in OceanCare, a Swiss environmental organization, was a key player.  I’ve often joined them in Switzerland for demonstrations and press conferences.  They have done a marvelous job.

Connyland is notorious – the only Swiss dolphinarium.  Two of their dolphins died last fall shortly following a rave party with loud techno music held at the facility.  The deaths show the incompetence of the Connyland owners.

When I received a Bambi Award on television in Europe, beamed to 5 million viewers in Germany and Switzerland, I told the audience, “Don’t buy a ticket!”

It all adds up to a great victory for dolphins.  We hope to end all captive dolphin facilities in Europe before too long.  It is time for these places to close.