Surfing for Dolphins in Taiji

Home/Blog/Japan/Surfing for Dolphins in Taiji 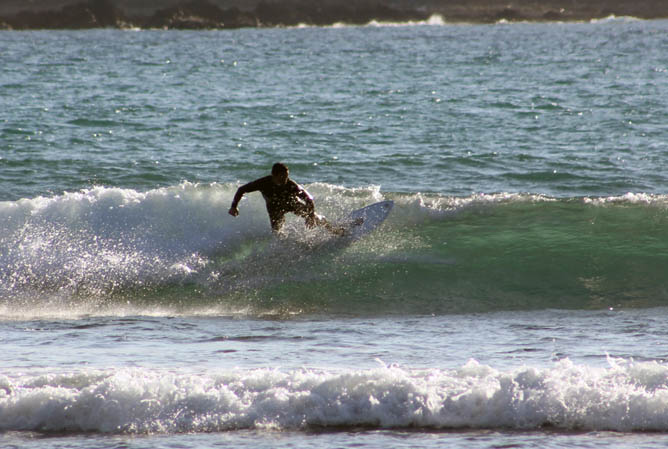 Here’s an interesting story.  I asked our volunteer Cove Monitor, Tim Burns, to check in on Sad and Lonely before he left Taiji in early March.  Tim filed the following report with me, showing his own brand of surfer diplomacy in action with his Japanese friends:

Last week I took a new friend to the Taiji Whale Museum to visit Sad and Lonely.  Yogi (his nickname) had been there before with his kids, but he has a different view of the marine park now.   We walked up to the entrance and asked for two tickets.  The clerk was a bit nervous and began speaking directly to Yogi, glancing at me occasionally.  She was voicing her concerns about me being an activist and my video-taping while inside the park.  Up to this point Yogi only knew me as a guy who surfed and talked about dolphins a lot.  Once I agreed I would not take video, we were good to go.  Now what is funny about this is everyone else had their video cameras out recording, but I was asked not to.

Yogi had taken his kids just a few weeks before, telling me what a great time they had.  He did not recall seeing Sad and Lonely, so I suggested we go see them first thing.  I did not say anything for about five minuets, and just let Yogi take it in.  After a bit he asked me where do they keep them at night?  I explained that this was the only place they have lived for several years.  He looked at me and said, “No, they must put them in the lagoon at night?”  No, I replied, they have only lived in this 15-20 foot tank for many years.  Yogi tried to interact with them as we stood there for about an hour, occasionally conversing, and he asking questions about this species.  I asked him what he thought his kids might think about the conditions of Sad and Lonely?  He thought he would never tell them, because it would be too sad.  On this day, Sad and Lonely remained almost motionless for the entire hour we stood there.  I was able to take a few pictures, but the staff watched us closely to make sure I would not video them.   We decided to go sit outside by the lagoon and watch them feed the captive pilot whales and Risso’s dolphins.  Yogi began asking me many questions about dolphins at the museum, usually looking at me in disbelief when I would answer.   We discussed their likely lifespan in the wild versus captivity.  And how many miles they might swim in the wild.

Sad and Lonely in their small tank in the Taiji Whale Museum at the beginning of March.  A few weeks later, they were finally transferred to a larger, outdoor pool.  Photo by Tim Burns.

After a while, Yogi asked if I wanted to go surfing in the afternoon.  Of course, I was not going to turn down an offer to surf.  I think it was more for his enjoyment, as the wet suit I was borrowing was easily a couple sizes too small for me.  Thank goodness it stretched!

We paddled out at a local break about 10 minutes from the Whale Museum.  Waves were pretty small, but as we sat there talking about diving in the area, Yogi blurts out, “I think dolphins should swim in the free.”  I asked, “So you think dolphins belong in the wild, not in tanks?”  He nodded his head yes.  I asked why he thought this now, but only a week ago, thought dolphins could swim in small pools, and it was OK.  He answered, “They don’t tell you that they only live a couple years, and how sad they are.”  I reached out and gave him a high five and replied that I agreed with him.  After a few waves, we headed in.   At the car Yogi asked if I had a couple more copies of “That Movie” referring to The Cove.  I handed over several copies.

This was my last time hanging out with Yogi before leaving, but I’m sure we will get to see each other again in my future trips to Taiji.  It feels great that there is one less family willing to pay money to watch enslaved marine mammals there in Japan.

Tim Burns was outstanding for Dolphin Project this year.  He not only stayed almost two months in Taiji, monitoring the dolphin drive hunts on a daily basis, but he also found time to talk to local Japanese like Yogi, mentor several new volunteers at the Cove, and helped our Dolphin Project Team coordinate the volunteer Cove Monitors in Taiji for the entire season, with the help of his wife Carrie.  We at Ric O’Barry’s Dolphin Project are very grateful for his help and the help of our many other volunteers.