Between the 18-22th of July, orca lovers from around the world will descend on San Juan Island, Wa. for the annual gathering known as ‘Superpod.’ Now entering its fifth year, Superpod5 is on track to welcome its largest crowd ever. 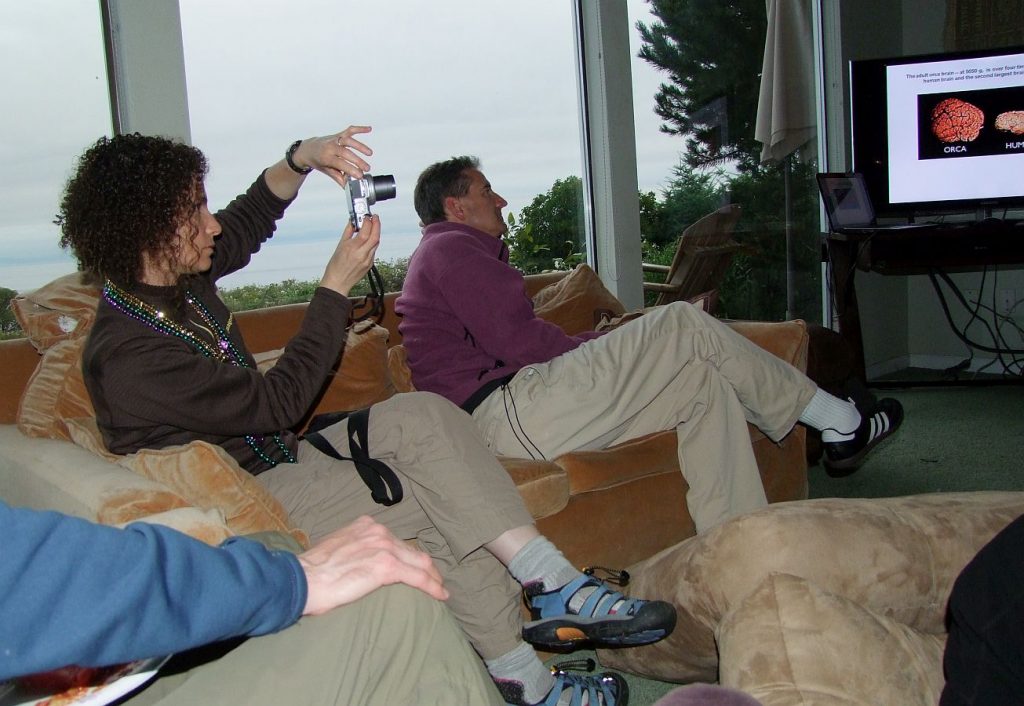 This gathering of orca experts, former animal trainers, scientists, conservation groups, cetacean advocates, reporters, and affectionately self-named ‘Dorcas’, will educate, report, and learn about one of the ocean’s most intelligent apex predators and the threats they face both in the wild, and also when held in a captive environment. Interspersed with opportunities for whale and dolphin watching, Superpod has evolved into one of the most desirable and best-attended events for cetaceans lovers from around the globe.

Superpod1 differed greatly from the event attendees will experience this year. The idea for this gathering of orca lovers was first proposed by ex-SeaWorld trainer Jeffrey Ventre, of ‘Blackfish’, to a Google group, called “Orca Aware.” Initiated by himself and writer Tim Zimmermann, the group included the ex-trainers that would become ‘VOTO’ (Voice of the Orcas), Zimmermann, ‘The Orca Project‘ (Colleen Gorman & John Kielty), Kim Ventre, Howard Garrett, Wendy Bruno and a few others. It was patterned after a visit to “Orca Survey” in 1996, the ongoing photo ID study that continues on San Juan Island to this day.

After spending two weeks living at the Center for Whale Research with Co-Principle Investigators Ken Balcomb & Dr Astrid van Ginneken, David Ellifrit, Howard Garrett, and spending additional time in the Pacific NW in Oregon and British Columbia, Ventre applied to the University of Western States in Portland, Oregon, where he began a new journey into the healthcare field. From 1997 through 2004 he visited the Center for Whale Research on several occasions, bringing friends and family.

Once you see killer whales in the wild, it’s a one-way door. There is no going back to imagining these large whales in a concrete tank at ‘SeaWorld’ or ‘Loro Parque’ or ‘Marineland’ or the ‘Miami SeaQuarium’. It also explains why SeaWorld discourages trainers, in my opinion, from doing this. To this day, most or possibly all SeaWorld staff-level trainers, have never seen a wild killer whale. I feel like many of them know, intuitively, that once they do, they’d have to quit their jobs — Jeff Ventre.

Ventre’s journey could have ended there, but for an event that occurred on February 24th, 2010. Neither he nor his fellow VOTO colleagues could ignore the tragic incident that occurred at SeaWorld Florida:

When Dawn Brancheau was killed by Tilikum, there was an information vacuum about orca captivity and what really happens at SeaWorld. The company was trying very hard to make her death seem like a “one-off” terrible, accidental drowning just as they did with Keltie Byrne and Daniel Dukes. Alexis Martinez (Loro Parque trainer) wasn’t even on the radar in the US media. Thus, there were numerous articles published, a book in the works, and interest by major news media outlets — Dr. Ventre.

By late 2010, the VOTO ex-trainers consisting of Ventre, Dr. John Jett; Carol Ray and Samantha Berg, had persistently spent hundreds of hours communicating with their “Orca Aware” Google group, journalists, and also with OSHA, the Occupational Safety and Health Administration. It was an intense time for the group, one that demanded an outlet.

“We thought it would be nice to offset these mostly depressing stories of captivity with some inspiration in the form of wild killer whales and the setting of the San Juan Islands,” Ventre said, “this is how the event began. A return ‘home’ to nature. Carol Ray and Howard Garrett already lived in WA state. Ken and Astrid were still working Orca Survey, so several in our group were already positioned at key locations, and Candace Calloway Whiting, writer, for the ‘Seattle PI’, was instrumental in both organizing and hosting the first two Superpod events. For year one, all of the presentations were done at her home, where David Kirby cooked up an incredible meal for all the attendees. She also acquired our venue, The Grange, for Superpod2.” 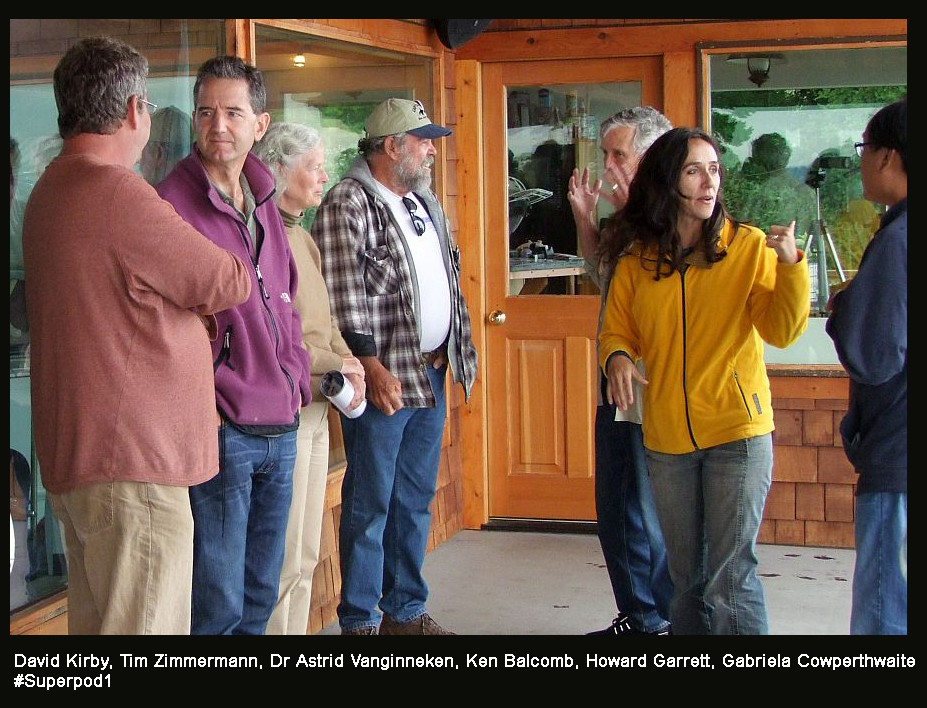 Image courtesy: Voice of the Orcas

After pitching by Tim Zimmermann, author of ‘Blood in the Water‘ (Outside Magazine; 2011), CBS’ “60 Minutes” show expressed an interest in attending the first Superpod (2011) for a potential piece on captive breeding. The CBS show fell through, but director Gabriela Cowperthwaite and her film team did attend the event.

“This was the beginning of ‘Blackfish‘ and the forum for author David Kirby to interview the ex-trainers for his book, “Death At SeaWorld“, Ventre said. “The first Superpod event included about two dozen non-islanders, ex-trainers, journalists, the ‘Blackfish’ film crew, and the creators of the documentary, ‘The Whale‘.”

Since the first Superpod, the event grew in stature. Superpod2 was attended by New Zealand-based orca researcher Dr. Ingrid Visser of the Orca Research Trust, and Dr. Naomi Rose, currently with the Animal Welfare Institute. It also served as the launching point for David Kirby’s book and the return of the ‘Blackfish’ film crew seeking further footage for the documentary.

The film crew rented out the entire ‘Western Prince 2′ whale-watching boat and that’s where we filmed the ending of ‘Blackfish’. Aside from the Loro Parque footage, most of the film was shot on or in the waters around San Juan Island, Wa. It is the unofficial ‘home’ of the film — Jeff Ventre.

The late, great Sam Simon, animal advocate extraordinaire, was also in attendance at Superpod2 and broadcasted a live radio interview with VOTO from the ‘Best Western’ in Friday Harbor. PETA Attorney Jeff Kerr also conducted a fascinating presentation on their 13th Amendment case vs. SeaWorld.

In 2013, Superpod skipped a year in order to promote ‘Blackfish.’ Voice of the Orca members traveled all over the world to take their message to as wide an audience as possible. All four gathered at New York’s ‘Museum of Modern Art’ for a VIP event hosted by Calvin Klein and others. Ventre visited Italy & Abu Dhabi, Samantha Berg was in South Korea and John Jett did presentations at university settings.

After initially ignoring ‘Blackfish’ SeaWorld Executives now concerned over the impact it was having sent a spy to Superpod 3. Aliasing as Thomas Jones, Paul McComb, who remains in SeaWorld’s employ, was sent to infiltrate the goings on at SP3 and report back to his employers. All McComb really ended up getting was an education and a free vacation. Superpod has and always will be open to the public, and VOTO readily extends the welcome mat to everyone in the pro-captivity community. 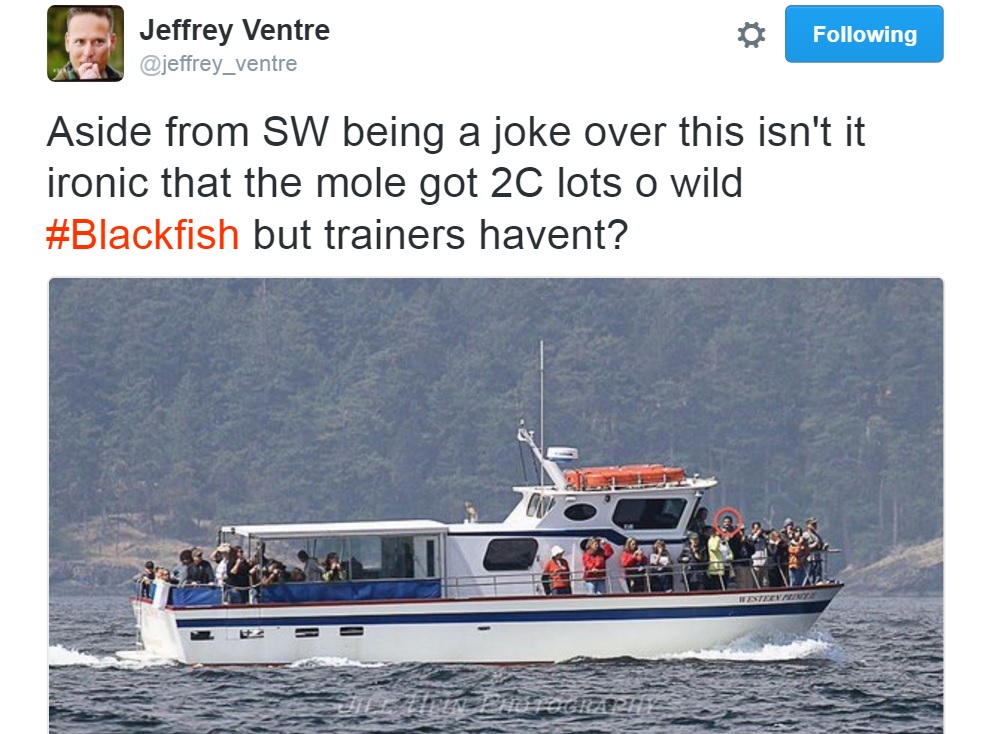 The mole was only successful in recording John Jett’s Powerpoint presentation on our survival paper, which was reported back to the company. SeaWorld then wrote its own paper, trying to contradict our conclusions — Dr. Ventre.

More than 100 non-islanders attended SP3, and people were coming off the street to see the free presentations and learn more. Many of the events were held in downtown Friday Harbor courtesy of ‘The Whale Museum‘, who was kind enough to offer free space for events. 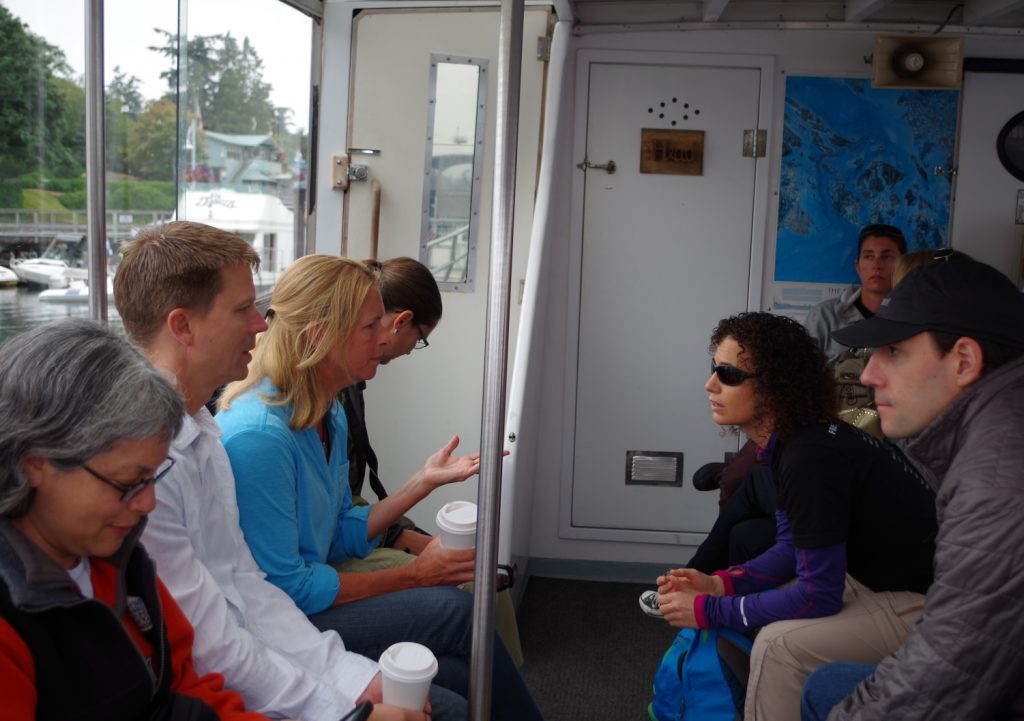 With even higher attendance expected this year, the theme of Superpod5 is all about, ‘The Future’.

“I believe we’ll have over 300 attendees travel from places all over the world,” said Ventre, “Drs. Naomi Rose, Lori Marino and Ingrid Visser will be in attendance, as will Lincoln O’Barry of the Dolphin Project.”

In the tradition of allowing the wild killer whales to inspire members of the general public, we hope to attract as many whale lovers as possible. This year, we feature some incredible youth leaders like Katie Emmons, Ella Van Cleave (Dolphin Project Youth Ambassador), and Mariah Kirby, who are presenting at the event. My sister, Kim, is the lead organizer this year, and has put in a lot of time pulling it together. It should be the best ever — Jeffrey Ventre. 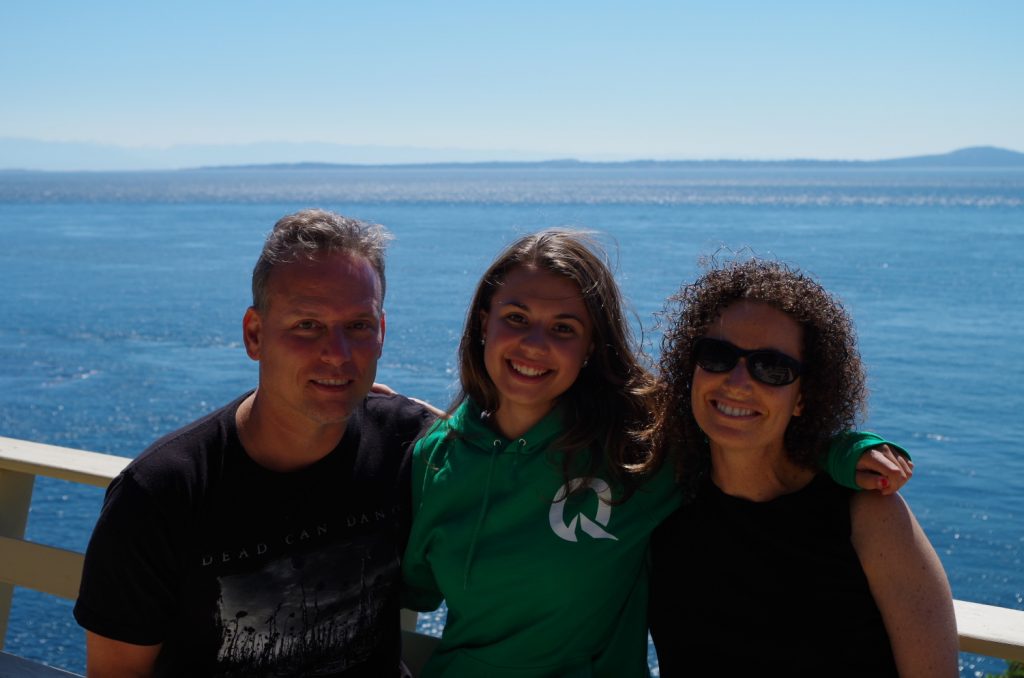 Superpod6 and a Special Announcement from Voice of the Orcas

It’s clear that the annual gathering on San Juan Island is growing in both attendance and importance with each passing year. Ventre told Dolphin Project,”it has been instrumental in getting scientists, activists, ex-trainers, and whale lovers, on the same page with engaging and informative presentations, and of course both Southern Resident and transient orcas.”

All four members of VOTO enjoy professional careers of their own, and from the moment the event concludes, the team has to switch gears to consider the forthcoming year. To make the schedule more manageable, the group has made the decision to turn Superpod into a biennial event. VOTO believes this will allow for more downtime and present an opportunity to involve more expert presenters.

“We’ve discussed taking a year off like we did in 2013, and also pushing the event into mid-September”, Ventre explained, adding that the Superpod event requires months of planning, securing venues, and taking care of whale-watching trips. “We plan on coming back stronger than ever in 2018,” he said, “and we already know the dates.” 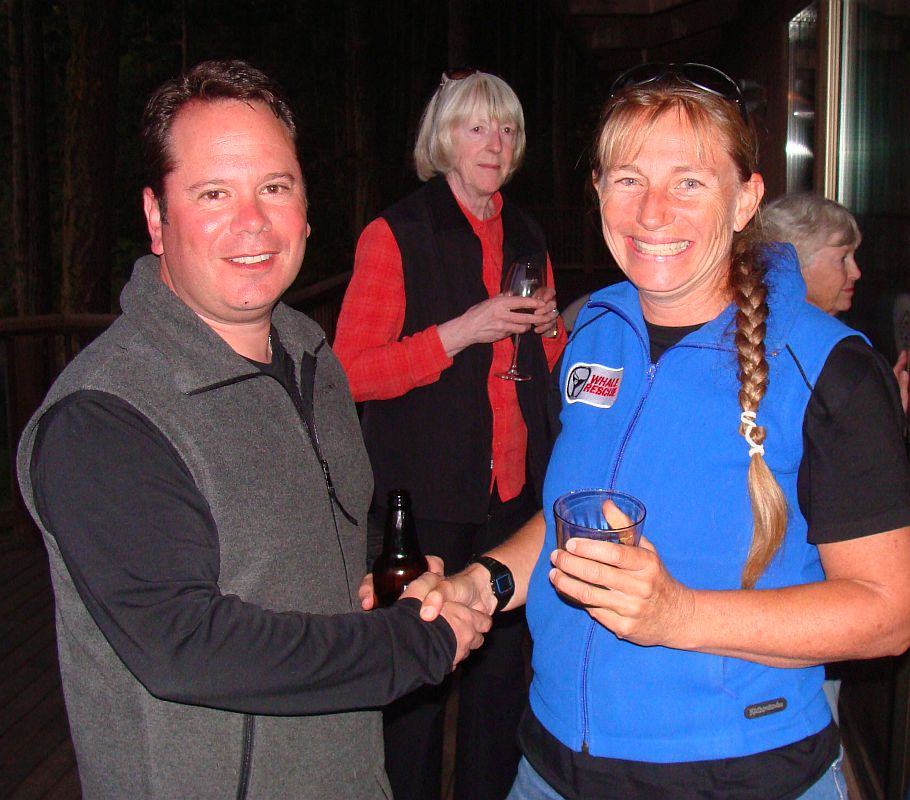 Event organizer and now whale-watch captain Jeff Friedman, with Dr. Ingrid Visser. Jeff has been key in helping to organize all SP events since SP2. Image: Courtesy Voice of the Orcas

There are no registration fees to the public for attending this event which is put together by dozens of hours of volunteerism, every year. Further details are available at Superpod’s official home on the web and the Voice of the Orcas blog site. 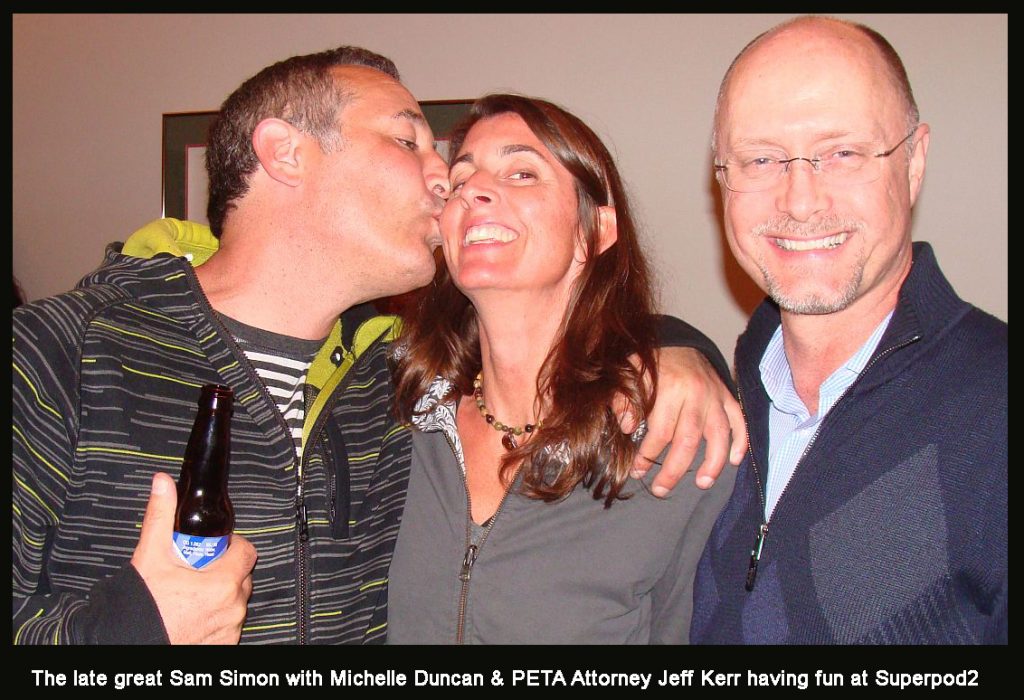 Image courtesy: Voice of the Orcas

Kim Ventre, Dr. Ventre’s sister and one of the lead organizers for Superpod5 has witnessed the growth of the event since Superpod1. She told Dolphin Project:

The first Superpod was just my brother informally coordinating a small group of friends and orca lovers to meet in the San Juan Islands to see wild killer whales. Funny enough, people showed up. Because all of the SeaWorld whistleblowers were gathered in one place, David Kirby came to do interviews for Death at SeaWorld and Gabriela Cowperthwaite arrived bringing the Blackfish film crew. It rained, we ate take-out pizza and sat on living room floors listening to scientists discuss cetaceans, captivity, and the Southern Residents. Fast forward to Superpod5 and there is so much going on. We have four days of programming with formal presentations, a full scholar advocacy day, whale watching from shore and sea, new films, books and hundreds of attendees from all over the world. Amazing how wholistic the event has become with sessions on ecosystems, ocean health, social media, school curriculums, legislative updates, and more. Not bad for a free event in a difficult-to-reach destination.

For those planning to attend this year, please do stop by and say hello to the Dolphin Project crew. Lincoln O’Barry will be presenting Wednesday, July 20, at the San Juan Community Theatre (check out our Twitter and Facebook page for announcement time), and you’ll also have the opportunity to meet several of our veteran Taiji, Cove Monitors. We hope to see you there.